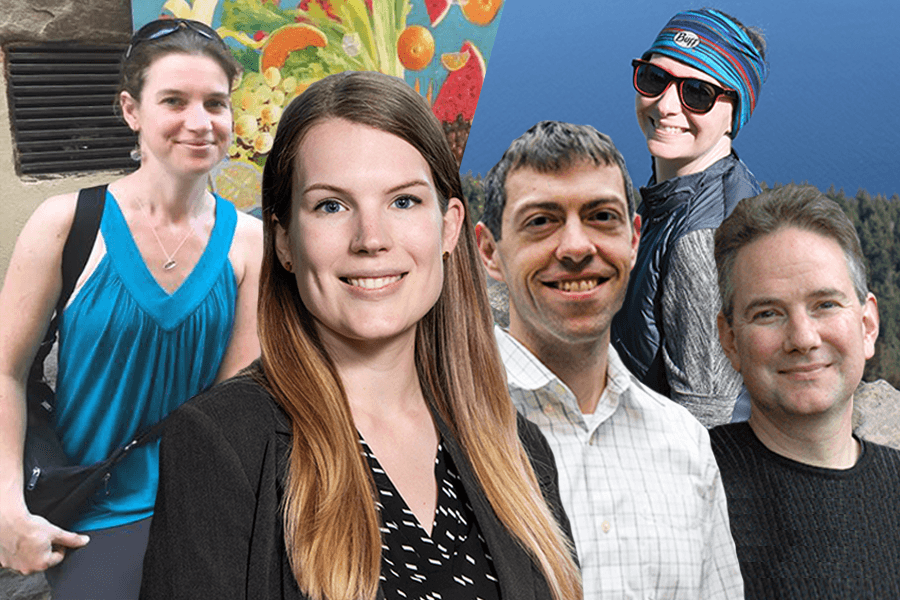 It’s in that spirit that The Whole U and the University of Washington are celebrating Global Running Day on June 5 by challenging faculty and staff to run, walk, or wheel a mile on the way to a goal of logging 1,000 miles together. But just what does it mean to “live life to the fullest” through running? And how does one get to a point where it feels like you are?

We teamed up with UW Transportation to spotlight the stories and strategies of five UW staff members who regularly run to or from work as part of their weekly routines. For them, running to work is more than a means to stay in shape; it’s a way of staying balanced and focused to begin and end the day. 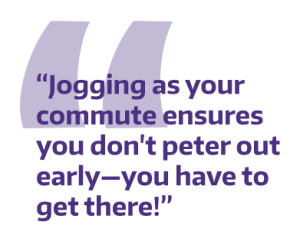 “[Running] is a great way to clear my head at the start of the day and get some extra fresh air,” says Sarah Nelson, a research scientist in the Biostatistics Dept of the School of Public Health, who has been jogging into work from Ballard along the Burke-Gilman trail at least once a week for the past two years. “Jogging as your commute also ensures that you don’t peter out early—you have to get there!”

Andy Krikawa, a web information specialist with the UW Facilities Communications Team, runs to work for similar reasons, but, above all else, he says doing so is a practical, efficient use of time.

“By combining a commute with a run, I greatly increase my chances of having multiple days during the work week where I fit exercise in,” he says.

“I know there are other folks out there who struggle with juggling priorities and exercise can fall to the bottom of the list, [but] running to work ensures that I’m able to conquer that struggle at least once in a while.”

A research strategist for prospect development with University Advancement, Lindsay Evans echoes that sentiment. She started running to work four years ago to “mix things up” from her typical 2-mile bike route when she lived close to UW’s Seattle campus. Today, she lives more than four miles away, but still makes a point of running to work at least twice a week.

“Now that I live farther away I tend to bus in the morning and run home after work,” Evans says. “If I don’t want to run the whole way, I break it up by taking the bus part of the way.”

For Evans and others, pounding the pavement provides time to organize thoughts before the workday and the chance to clear your head after it. Jonathan Kocarnik, a research scientist/engineer 4 at the School of Medicine’s Institute for Health Metrics and Evaluation downtown, says running “cuts out the stress and variability of traffic and parking and is a nice way to get up to speed in the morning and decompress on the way home.”

For the past two years, Kocarnik has broken his daily running into four, ½ mile “chunks,” running to catch the light rail at Husky Stadium and then from his light rail stop downtown to work.

“As a parent I want to make sure I’m healthy enough to be there for my kids, but it can be tough to find the time to exercise,” he says. “Running to work ensures I get in at least a little something on most days, and gives me confidence that I can run after them all day.”

One of Kocarnik’s favorite places to run in Seattle is around the “back side” of UW’s Seattle campus (where the athletics facilities are) as a way to add to his weekly mileage before or after work. “You don’t have to run or walk the entire way,” he says. “Just find a routine that works for you.” 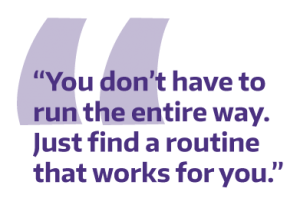 Kristen Rarich is a seasonal run commuter, logging two miles each way from Fremont on her way to work as a budget/fiscal analyst for UW Athletics. She started to run to work last spring, but took the winter off. She’s no fan of hot weather either. When days get hot, “it’s rough going on a lunchtime run,” she says. “Running in the morning or after work makes a little more sense.”

Rarich says incorporating running into a commute has “absolutely” helped her achieve several fitness and running-related goals outside of work, despite not being what she calls “a serious athlete.”

“My biggest running-related goal was to run a half marathon race and running to or from work helped me grind away at my training schedule,” she says. “Consistent running has also helped with my fitness for other activities I enjoy like cross-country skiing and biking.”

7 strategies for building your run-to-work routine:

Andy Krikawa says starting small is key to finding a routine that works for you. “Walk or run part way and take transit for the rest, only do it certain days of the week, start during the nicer months of the year, have a back up plan in case your plans change beyond your control,” he says.

Kirsten Rarich sports a small running pack for carrying things such as water, keys, her wallet, and phone, while Lindsay Evans and Sarah Nelson both port a small hydration backpack that leave only enough room for daily necessities. Nelson also carries a lightweight expandable backpack so she can carry more home than she brought in, should the need arise.

Rarich and Krikawa both advise stashing workout clothes and toiletries at your desk or workstation. Alternately, if you’re running to work, keep an organized assortment of clean work clothes at hand to change into once you arrive.

Don’t be dissuaded from running if your commute is not a straight shot to campus. Run to and from your transit stop or along a route that allows you to catch a bus if you feel your energy dropping. “Don’t run the same route every time,” advises Rarich, who advocates mixing up your path—if only by a street or two—to keep things fresh and interesting.

Be aware of your surroundings.

The Burke-Gilman Trail is great for runners, but it also used by cyclists and is intersected by streets. Routes that utilize sidewalks are best. Rarich recommends using the Strava route builder, a tool that uses other user data to help you choose the right roads and paths.

Additionally, AccessMap, an online tool developed by a team led by Anat Caspi, director of UW’s Taskar Center for Accessible Technology, allows Seattle pedestrians to customize routes according to personal preferences based on factors such as elevation change, locations of sloped curb cuts, accessible crossings, and avoidance of construction sites.

There’s no better time than the present to break out of a workout rut and start a new running routine at work. Use Global Running Day as a jumping off point and then register one or all of the following events from The Whole U for more opportunities and guidance for running to get the most out of life:

I live close to campus and would love to run or bike to work, but I don’t want to show up to the office smelling like I didn’t shower! I recall during my new-hire orientation that there are showers that the UW cycling community can use… where would we find more information about this? Also, it would be great if anyone would like to share some links for gear… like those small running backpacks I’ve seen people with. What are they and where do you get them? Thanks for the info and encouragement!

I agree Emily; yes, there are showers on campus –most of them very under-utilized– and Transportation Services treats any other info about them as a VERY closely guarded secret! Their only response is “contact your building coordinator,” and if you don’t happen to work in a building that has a shower, you’re pretty much out of luck. Which is crazy — are we only allowed to use RESTROOMS in our own building? I get that they don’t want shower facilities to be overrun by non-university users (homeless) but it’s possible to control for that; make them accessible only with a Husky Card. Vending machines all over campus take them already. If the University were serious about getting us out of our cars and walking/running/biking to campus, they would make it possible for us to use the shower facilities that ALREADY EXIST.

Ellen, we hear your concern. The availability of showers in buildings varies and that makes disseminating a one-size-fits-all answer from this platform difficult. At present, the best bet is still to contact your building coordinator about the availability of facilities in your building and/or buildings to which you have access. Faculty and staff with IMA memberships can use the shower facilities at the IMA and the Pavilion Pool (call 206-543-4590 for details). If difficulty finding shower facilities on campus feels like it is hindering that morning run to work, we hope those reading this article will take away that a run home from work is in every way as good. Moving ahead, we’ll see what we can do to investigate the campus shower situation further on behalf of all UW faculty and staff.

At present, the best bet is to contact your building coordinator about the availability of facilities in your building and/or buildings to which you have access. Faculty and staff with IMA memberships can use the shower facilities at the IMA and the Pavilion Pool (call 206-543-4590 for details). As for gear recommendations, The Whole U is not able to provide specific product endorsements, but I can ask those featured here to provide their own.

I don’t know where I’d shower and not a morning person – I run home!