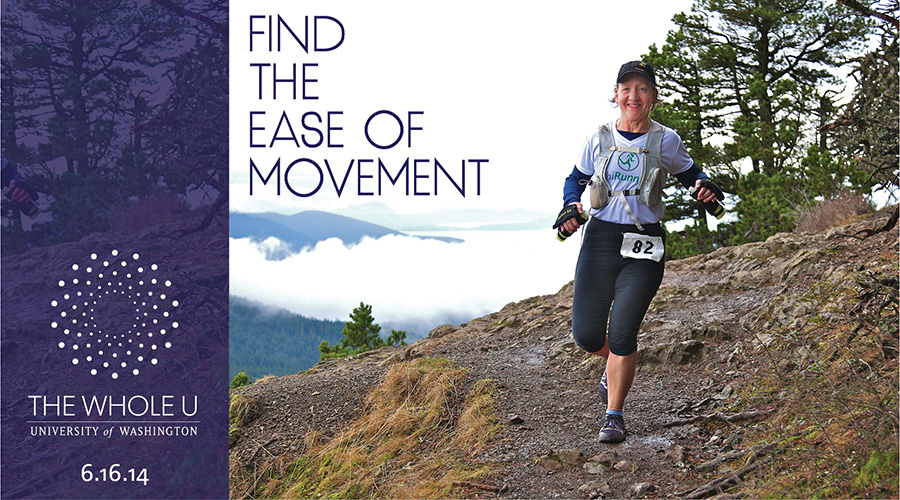 I’ve been running off and on since the 70’s (the first running boom!) and I ran my first marathon in 1985. I didn’t run another one until 2005, and even took 10 years off from running because I was a busy single mom. As my son became more independent, and I had more free time, I felt the pull to return to running. I started getting ready for that 2005 marathon, and I came across Chi Running, first on a friend’s website, and then when my training partner lent me a book on it.

What is this ‘Chi Running’, you ask? Chi Running is a technique that takes the central movement principles of tai chi and combines them with the sport of running, shifting the workload towards the core muscles and giving the legs a rest. This not only causes a significant reduction in injury rates, but also increases one’s efficiency. Ultimately, it allows you to run without pain and with less effort – which makes for a happy runner!

This technique was developed by Danny Dreyer back in the ‘90s when he blended his ultra running with his tai chi practice. His knee pain went away and he had more energy, even after a 30-mile training run! He started coaching others and laid it down in a book in 2003, starting a wave of fans that span around the world today. Here’s my own take.

About two months before that marathon in 2005, my friend lent me the Chi Running book, but I got my own within a week. I was already practicing yoga and focusing on engaging my core to protect my back, so Chi Running resonated with me. I have a bad back (scoliosis) and suffered my share of pain and injuries, but taking this into running was new to me. After reading just part of the book, I started applying the first lesson, which is postural alignment, and my endurance shot up. I felt stronger and lighter, and my form changed so much that others commented on it. Plus, my back pain left! After years of living with it! On marathon day, I had a good race and managed to qualify for the Boston marathon, but that wasn’t what totally sold me. As we were walking back to the hotel, my friends complained their feet were hurting. It had been a warm day, and having trained through the winter, we weren’t used to the heat. That was the first time I noticed mine did NOT hurt. I had just run a fast (for me) marathon and my feet didn’t hurt! I drank the Kool-Aid, as they say. I was sold.

Danny Dreyer came to town that summer and gave a two-day workshop. It was loads of fun and I soaked up all the lessons. That fall, I did another marathon–the Nike Women’s marathon–for ‘fun’ with a bunch of girl friends. The next day I did not feel like I had run a marathon. The recovery time was almost nil. I was sold again. As I prepared for Boston, some friends I met in Danny’s class and I would get together about once a month and do a ‘refresher run’, taking turns calling out focuses to each other (focuses are tips you learn for maintaining good alignment and relaxation). I blame those people for what happened next.

Instructor training was coming to Seattle in April 2006, right after the Boston marathon, and my friends thought I should become an instructor. It was a chunk of change, but I decided to go for it. So I ran Boston, studied while I rested, and was barely home before immersing myself in a four-day intensive class to learn how to teach this to others. I fulfilled all my requirements and taught my first class in the fall of 2006. Since then, I’ve taught hundreds of folks how to move more efficiently, both in walking and running. In 2013, I was awarded the level of Master Instructor, enabling me to train others how to teach Chi Running and Chi Walking.

Speaking of Chi Walking, Danny and his wife Katherine created that out of Chi Running because people would ask him at race expos if there was a program for walkers. The principles are the same with a few variations in technique that make it more appropriate to walking. And now there is the Chi Walk-Run program, focusing on good alignment during the running, walking, AND the transitions in and out of running. This was a life saver for me.

Chi Running helped me in my marathon running, as well as other race distances (from 5K to 50K), but in 2010, I hurt my knee in an accident, and thought I would not be able to run again. The Chi Walk-Run program was soon released after that, in 2011, and I started incorporating it into my walking. Chi Running and Walking follow the same laws as tai chi and one is the law of gradual progress. The Chi Walk-Run program kept me in proper alignment, and helped me regain strength in my leg gradually over time. One thing about injuries: they will let you know they are there when you move wrong, and this has taught me to view an injury as a gift. To this day, I still practice the Chi Walk-Run method on some of my runs, or when my leg lets me know it’s tired. And I continue to share and teach Chi Running, Chi Walking, and Chi Walk-Run with others. Nothing makes me happier than to see my clients experience an ah-ha moment.

Check out the REI blog for a good article on a typical Chi Running workshop. Want to know what a Chi Walking lesson is like? Read this Seattle Times article!

Laura’s June seminar filled up in record time, but keep your eyes peeled because she’s agreed to do another one in the fall! Thanks to Laura for sharing this passion with us!