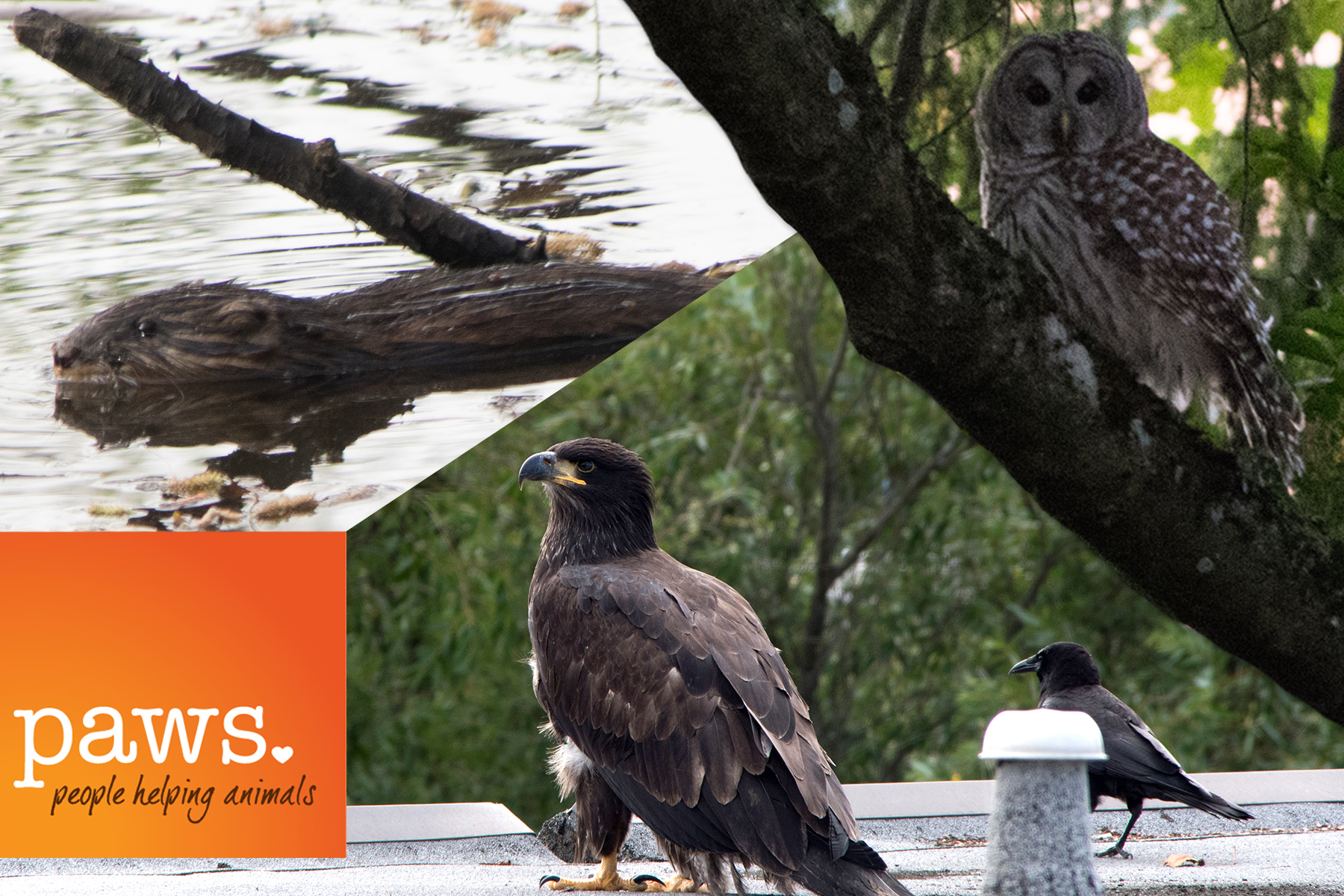 Chances are you’re not spending much, if any, time on the University of Washington’s campuses this spring due to COVID-19. That’s why, for Earth Day, we thought we’d bring you a story that recalls the life-giving richness of the spaces we normally share so that when time comes to reoccupy them, we can do so with renewed appreciation and refreshed perspective. 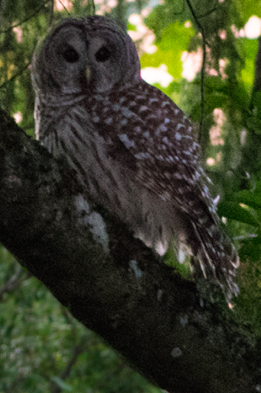 The “UW Owl” in Sylvan Grove after its release.

Once rehabilitated, some of those animals get reintroduced to the wild at the University of Washington’s main Seattle campus, whose 700+ acres offer a mix of habitats that an array of urban and not-so-urban wildlife species call home.

If you include UW-owned land around Lake Washington and the Washington Park Arboretum, the species diversity becomes even greater, making the entire area a perfect home for year-round wildlife as well as those just passing through.

Just a few months ago, a barred owl (Strix varia) affectionately dubbed the “UW Owl” by media was found having apparently collided with a window mistaken as a fly-through space outside the Allen Library.

The impact caused pelvis and scapula fractures, as well as retinal damage in one eye. After treatment for shock and diagnosis of injuries by Wildlife Veterinarian Dr. Nicki Rosenhagen at the PAWS Wildlife Center, the owl recuperated from the injuries and was released back to Sylvan Grove less than a month later. 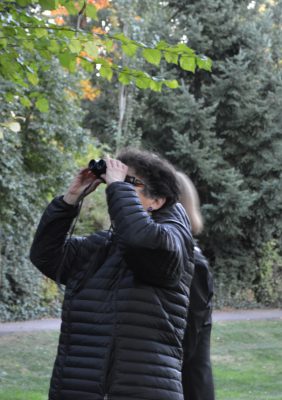 UW President Ana Mari Cauce looks on at the PAWS release of the “UW Owl” in October 2019.

UW President Ana Mari Cauce, an amateur birder, was given the honor of lifting the gate on the carrier, likening the raptor’s unfortunate accident and successful rehabilitation to the university’s Fail Forward program.

“It’s all about resilience. We teach our students that sometimes you fall just like our [owl] friend did and there’s nothing wrong with that,” Cauce said at the owl’s reintroduction to the wild. “Then what you need to do is, hopefully, with support from our wonderful UW family—and friends at PAWs—you get back up and use it as a learning experience. Often failure is the first step to success.”

It wasn’t the first and won’t be the last time PAWS and the UW interacted directly or indirectly through the wildlife inhabiting UW grounds.

In 2019, when UW staff was concerned about a bald eagle baby who had fallen from a nest along the Montlake Cut, they called PAWS Wildlife Center. PAWS Wildlife Naturalist Jeff Brown ultimately climbed atop the Conibear Shellhouse to reunite the eaglet with its family in an adjacent tree.

The most recent mammal patient from UW restored to health through medical treatment and rehabilitation at PAWS Wildlife Center, was a muskrat (Ondatra zibethicus) found injured and non-responsive on the 520 Bridge with multiple injuries and a severely damaged tail. After stabilization and treatment, including multiple surgeries, this medium-sized native rodent was restored to health and returned (rematriculated?) to UW early this spring. 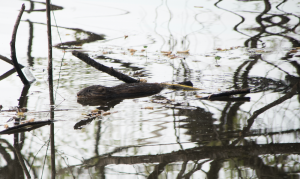 PAWS’ most recent mammal patient from UW: This muskrat was restored to health through medical treatment and rehabilitation at PAWS Wildlife Center and released to its native habitat on the UW’s Seattle campus earlier this spring after it was found on the 520 Bridge with multiple injuries. 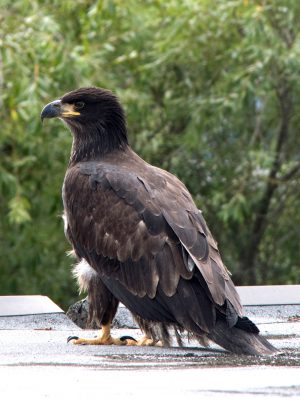 Learn more about wildlife at UW! Join Dr. Huckabee for a May 14 webinar to explore ways we can be good stewards of our shared space and how UW and PAWS have partnered to rescue, rehabilitate and release on campus injured and orphaned wild animals over the years.

These are just a few examples of the few hundred species of wild birds and mammals that occur in and around the UW main campus.

Of course, the species and populations tend to change with migration, mating and nesting seasons, and early autumn dispersal of the year’s young. You just need to look around to see numerous waterfowl species on the lake and its shores, bald eagles and osprey flying over, hummingbirds and songbirds, squirrels, and so many more.

Early morning and early evening are good times to watch along the margins of the landscapes and in the skies. Bats are a common, very misunderstood and fascinating mammal with a half dozen or so species common in our area and often visible at dusk contrasting against darkening sky while they perform their aerodynamic and effective insect control.

What you can do to help wildlife on UW campuses: 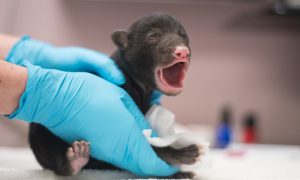 Amid the COVID-19 pandemic, PAWS is continuing to provide essential services to animals and people. The need is great, especially during the spring’s busy baby season when kittens, puppies, and orphaned wild animals require round-the-clock care.

You can be a hero to a baby animal like this orphaned American Black Bear cub, one of seven currently in care at PAWS Wildlife Center. Head to the UW Combined Fund Drive and enter PAWS charity code 0329960.

Dr. John Huckabee has been a Wildlife Veterinarian at PAWS Wildlife Center in Lynnwood since 1998. In 2017, Dr. Huckabee was appointed PAWS Veterinary Program Manager, working across the Wildlife and Companion Animal Services Departments. He has served on nonprofit boards of directors, advisory boards, steering committees, task forces and editorial boards since the late 1980s, and most recently served as a Vice President of the Washington Wildlife Rehabilitation Association through 2019. In February 2020, he received the Lifetime Achievement Award from the National Wildlife Rehabilitators Association. Dr. Huckabee holds a degree from Texas A&M University College of Veterinary Medicine.

One Thought on “Wildlife Found and Released on UW Campus”