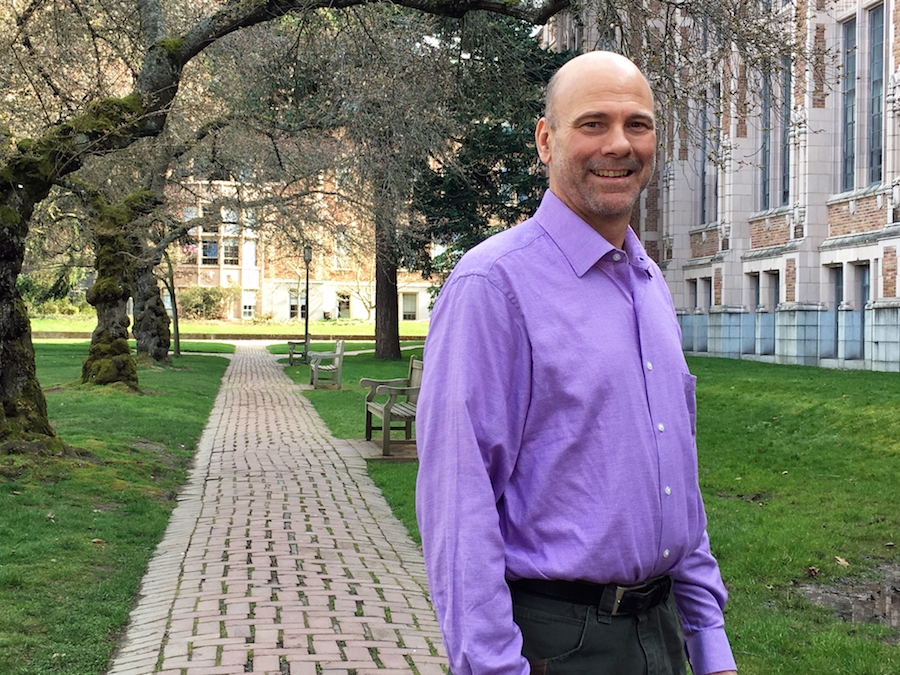 Over the course of his career, Joe Grojean has navigated some dangerous situations and extreme conditions.

There was that time as a Peace Corps volunteer in Burundi when he had to be airlifted home with a broken leg after an errant taxi swiped him off his motorcycle. Or that job at a military base on the remote Johnston Atoll in the South Pacific safely disposing of chemical weapons such as nerve agent and mustard gas. Or the six months prior that Grojean spent living and working in Antarctica as a hazardous chemicals specialist at the McMurdo research station.

Grojean’s itinerant work schedule has settled down somewhat in recent years—though he and his family recently moved back to Washington after a year living Germany. Stateside, he’s served two stints at the University of Washington, most recently as Hazard Assessment Coordinator, a job that involves identifying, evaluating, and controlling physical and chemical hazards in and around the University. 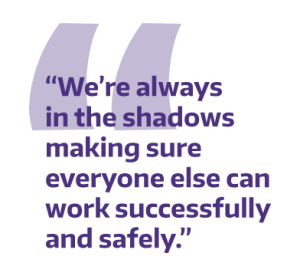 That extends to protecting workers involved with fall protection or confined space entry as well as anything involving scaffolds, excavations, noise, electrical hazards, heat and cold stress, to name just a few.

“You never hear about safety people or talk to industrial hygienists,” says Grojean, who, on any given day, might be found (though, in all likelihood, not) wedged into a crawl spaces, clamoring through rainwater collection tanks, atop the roof of Husky Stadium or behind the lath and plaster ceiling of Suzzallo Library. “We’re always in the shadows making sure everyone else can work successfully and safely.”

On Tuesday, March 19, however, Grojean was front and center as a guest speaker at The Whole U’s annual Ambassador luncheon to share the story of his most perilous workplace encounter: cancer.

Before working at the UW, Grojean served as a contractor with the EPA, working around hazardous materials as he had often done after an undergraduate degree in marine science propelled him into the field.

At an annual physical, he learned his blood counts were lower than they should have been. After shuffling through doctors, he met one who decided to perform a bone marrow draw.

“He said I had a condition and I shouldn’t be alarmed,” Grojean recalls. “But that I should go to a specialist he knew at the Fred Hutchinson Cancer Research Center. I thought they were going to track me for research.” 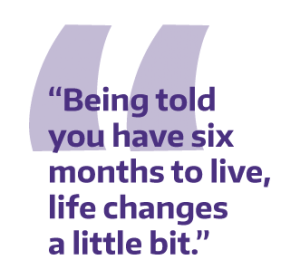 That’s when he learned he had developed myelodysplastic syndrome (MDS), a condition that can occur when the blood-forming cells in the bone marrow do not mature. In 15 minutes, the doctor laid Grojean’s life before him: if the MDS were allowed to progress, it would turn into leukemia and certain death.

“He told me there’s several treatment options, but if I didn’t get treatment I would be dead within 6-18 months,” Grojean says.

“Being told you have six months to live, life changes a little bit.”

After taking a month to spend the Christmas season celebrating life with family and friends, Joe began getting ready for chemotherapy.

He remembers his outlook at the time as happy and hopeful, even as doctors prepared to destroy his blood—one of the most aggressive cancer treatments a body can undergo. 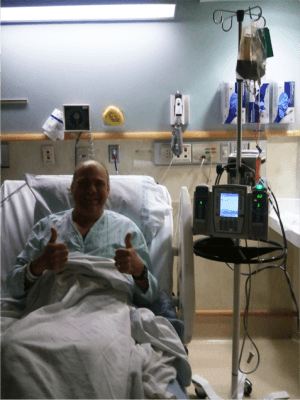 “Everyone knows someone that has cancer and has beat cancer—I did too,” Grojean says. “I didn’t think of it as the big bad C word; I thought of it like having the common cold.”

After a month of chemotherapy, he returned home tired and exhausted, his immune system depleted to the point where the tiniest scratch from his dog sent him back to UWMC with an infection that lasted two months.

After fighting numerous other infections and finally becoming stable, a genetic stem cell match was identified through the bone marrow registry.

“My brothers are a match for each other but not for me,” Grojean says, adding that the Gift of Life registry found someone whose stem cells were a match.

After a “glorified blood draw,” and Grojean received a transplant (Less than 20% of stem cells for transplant come from bone marrow extraction now.)

“I started healing from there: working out, trying to eat, trying to stay healthy,” Grojean says. But six to eight months later, he realized he wasn’t quite healthy. “So I asked my doctor to do a blood draw early. The cancer had come back.”

“The crazy thing about it was that there were hints of my blood in my system. My blood had changed itself genetically to protect itself from the new blood! It’s amazing. Unfortunately it also meant the cancer survived.”

He recalls his doctor, Dr. Bart Scott, whose specialty is MDS reoccurrence, being visibly upset. “He said, ‘You must think I’m the angel of death.’ I said, ‘No, you are my guardian angel. I should be dead right now.'” Scott told Grojean there would be fewer options the second time around.

“We couldn’t be as aggressive because there’s a 90% fatality rate with full chemo,” Grojean says. “So we did months of not as aggressive chemo and a big dose of radiation.” 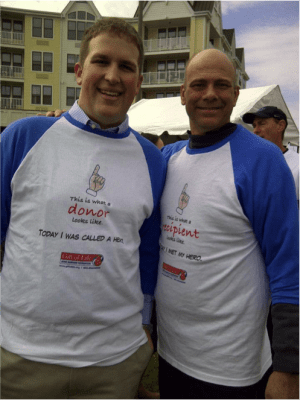 Joe with his donor.

This time, the transplant was a complete success. Stem cells introduced to the blood system find their way to the bone marrow and start growing and reproducing. Joe began his slow journey of recovery with his blood counts slowly getting back to normal.

Then, 11 months later, he received a letter from his donor: a 26-year-old from New York City who had happened to attend a walk-for-rights march decided to swab his cheek and join a registry as a possible stem cell donator. Six months later, they harvested his life-saving stem cells to be transplanted into Joe.

Reflecting back on the decision to donate, the donor told him, “I can’t believe in retrospect I even had to think about it. I will always know this meaningful experience was part of my life.”

For Grojean, the donation was not just life-saving, but also life-changing.

“I completely changed blood types and I had to get my newborn inoculations all over again; I also received his allergies. Now I’m allergic to shellfish, which the donor never knew because he’s an Orthodox Jew. It turns out I have Jewish heritage, which I never knew, so that’s possibly why we’re a match.”

In early 2013, Grojean was given a clean bill of health. He was cancer free and something of a medical miracle by surviving the odds and not being on any medications. Shortly thereafter, he joined the UW as senior industrial hygienist.

“My number one job here is to ensure that when you show up on a job site, that you go home at the end of the day just one day older. Our job sites involve risks, but I want to reduce the risks to as close to zero as possible.”

“I especially don’t want anyone on my job sites, or this campus, to go through what I went through with cancer,” he says. “We all want to go home and see our kids, grandkids, friends, or loved ones. The people I work with on campus truly care about their safety, the safety of others, and doing the right thing.”

The power of a positive outlook is no small thing for Grojean. It’s part of what helped him beat cancer. But that wasn’t all. People he hardly knew came out of the woodwork to support him and his family during his periods of treatment and recovery.

What can strangers do to play a pivotal role in helping people like Joe push through? 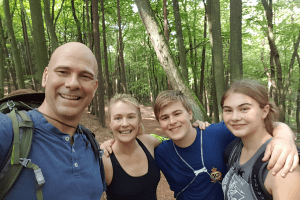 “There’s no greater feeling than to be someone who directly saves someone else’s life so that person can continue to be with their friends, family and loved ones. I know I will be forever grateful to my donor.”

People can also get their cheek swabbed as part of UW’s groundbreaking partnership with Be The Match, the nation’s largest marrow registry working to cure rare blood cancers. Hear Joe and other UW faculty, staff, and students speak from their experience on April 17 at the HUB. Register here.

“Getting your cheek swabbed is easier than brushing your teeth. A simple thing that if you are called up to be a possible donor to save someone’s life, not only will it will save someone else’s life, but it will absolutely change your life for the better.”

“There’s no greater feeling than to be someone who directly saves someone else’s life so that person can continue to be with their friends, family and loved ones. I know I will be, and my family will be, forever grateful to my donor.”

To register to potentially save a life,
visit Join.BeTheMatch.org/UW
or Text CURE16 to 61474.

Learn more about UW’s groundbreaking partnership and upcoming ways to get involved here.

Joe is the best guy around. He minimizes what he went through: I saw it first-hand and though it was brutal, Joe always had a smile on his face. Joe will forever pay it forward, it’s just in his nature. You’d be lucky to meet him and luckier still to call him friend. As family, I and the rest of our bunch, are blessed to have him in our lives:) xo Joe, Cheryl:)