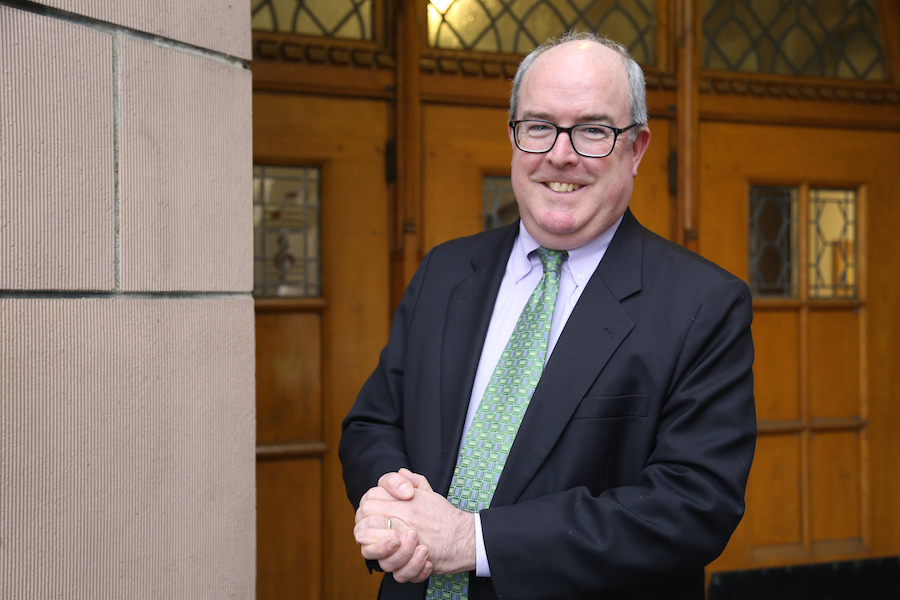 We all have that song—the piece of music that gets us moving in the morning. The one that taps a hidden reserve of energy during a workout in pursuit of a personal best or which settles the nerves at the end of a stressful day. It’s the one that really takes you back, spurs you forward, or otherwise sets the mind wandering—evoking flights of fantasy or specific memories from times bygone.

Morrison is director of the Laboratory for Music Cognition, Culture and Learning, which explores how formal and informal processes of music learning are shaped by culture, biology, and experience. Founded in the wake of the International Conference on Music Perception and Cognition held at the UW in 2009, the Lab serves as hub where people steeped in music performance and learning connect with experts in cognitive psychology, brain function, and neuroscience. It’s a confluence of disciplines that reflects music’s ubiquitous place in the human experience.

“There are a lot of paths open,” Morrison says of the possibilities of studying music cognition. Research can range from investigating music on productive, perceptual, affective, developmental levels; limitations lie at the bounds of a researcher’s own curiosity. There is a common thread, however, and that’s music’s capacity to move and improve—speaking on a universal level to listeners and performers of all ages, eras, cultures, and abilities.

“One of the primary uses of music people have identified is mood regulation,” Morrison says. “People seek music to create a certain mood or to facilitate certain activities. It seems to help us crystalize, organize, compartmentalize, or clarify ways of thinking and feeling and we can tell this because people don’t always seek music to make them feel happy.”

So what is it that makes a piece of music effective in establishing a certain mood or helping actualize an intended outcome?

“You want to identify music that is congruent to what you’re going for—or maybe incongruent to create some sort of tension or setting something in an unexpected or unfamiliar light,” Morrison says.

That’s why, when UW Athletic’s Director of Olympic Strength and Conditioning Todd Tuetken wants to lend a light mood to an otherwise heavy workout, he might spin Rose Royce’s 1976 disco classic “Car Wash.” Or, when he wants to invigorate the gym floor with instant energy, he might blast the Australian electronic dance hit “Freaks.”

“For my staff the general response is, music needs to be upbeat tempo and loud,” Tuetken says, adding that on Fridays, “it’s not uncommon to find athletes across multiple teams singing the words to the songs and it usually makes for a fun training session for whoever is in the weight room.”

Multiple studies have linked music with improved athletic performance, in part due to its simultaneously relaxing and stimulating effect on brain function, which carries over into muscle movement. But what most interests Morrison as a music scientist studying cognition is, “What about this array of sounds, put together in a particular order, deploying these particular instruments, timbres, is it that creates that?”

“Car Wash” wasn’t originally written to motivate collegiate basketball players at a 7 am workout, yet forty years after its release, it is. “That’s not in there directly, but that’s what you’re taking from it,” Morrison says. “How are you deriving that meaning from that? How is this something that seems to transfer—or is at least understandable—across people.”

It’s a concept Morrison explored in depth in a 2016 study exploring the possible influence of music preference on recognition memory performance across cultures. Listeners were randomly assigned to hear Western and Turkish music in one of three musical contexts (full, monophonic, isochronous) and subsequently tested on their recognition memory.

Another study examined how a conductor’s gestures influenced evaluations of ensemble performance, concluding that a conductor displaying more expressive movements was likely to result in a higher audience evaluation, “regardless of the ensemble’s performance quality.”

Music—and how we experience it—can then also be an embodiment of motion itself.

“It’s something that happens across time. you can’t imagine music as a singular moment; it’s is a sequence of moments much like movement is a sequence of moments,” he says. “When we interact with our environment—and music is part of our environment both internally and externally because we can imagine music and bring it into existence just in our heads—it changes us.”

The science of music

Music first changed Morrison’s life when he attended a performance by the high school band as an eighth grader living in Baltimore. He made up his mind to join the band the next year—and did, eventually mastering the trombone. As a freshman at Northwestern, he joined the marching band, but even then intended to study biology with plans of going to medical school. His sophomore year, almost on a whim, he auditioned to study music and was accepted to study in the University’s School of Music.

However, he never lost his interest in science—eventually fusing it with scholarly music research as a doctoral student after completing a Master’s track in music education.

“I had the opportunity to learn about putting music together with a scholarly, scientific approach and from there forward, I started adding that to my ways of looking at music,” he says. “Music cognition is not just about producing music; it’s about interacting with it.”

Morrison says a background in music cognition can help music teachers better understand the make up of a class and accentuate learners’ individual interactions with subject material.

“We have students going out to [teach in] schools and they step into a music classroom and here are students—a classroom of 30 different kids from 30 different backgrounds,” Morrison says. “As music teachers, we’re bringing music experiences to each of those students and it’s going to be a different experience for each of them. We can’t assume they’re going to interpret or extract meaning in the same way as any other student or as you as the teacher.”

In his capacity as chair of Music Education, Morrison says one of the biggest challenges for music educators is underscoring the importance of music in human identity and its place in the core of the educational experience of young people.

“In our society, music is often viewed as an extra—a talent bestowed—but in reality, it’s something that engages virtually everyone,” he says. “Music is a human attribute—a human way of thinking—that is available to everyone and that can be continually developed across a lifetime and used to make sense of interactions, events, and ourselves. If anyone can benefit from ways to come to know the world and to come to know themselves, it’s young people growing up.”

To realize that potential, Morrison says institutions like the School of Music must strive to serve as advanced centers of music study that “promote excellence and the highest level of thinking across music broadly.”

“You want people to look at the School of Music and say, ‘The thing I care about, they care about too; whatever I’m interested in, I can feed my interests here.’”

The most rewarding part of Morrison’s work at the School of Music is working with students he describes as “incredibly creative.” He says he’s proud to work in a place where anyone with the skill and interest can find a home in music-making activities available on campus.

“There are opportunities for everybody,” he says.

That includes faculty. In his 20 years at the UW, Morrison says he’s never felt compartmentalized.

“It’s not a sense of, ‘Here’s your task, your role, your field—now protect it with all your might,” he says. “It’s, ‘Here’s your field, now redefine it.’ And to come here among people who actually live that and support that has been terrific.”

Steven Morrison holds a B.M. from Northwestern University, an M.M. from the University of Wisconsin, and a Ph.D. from Louisiana State University.