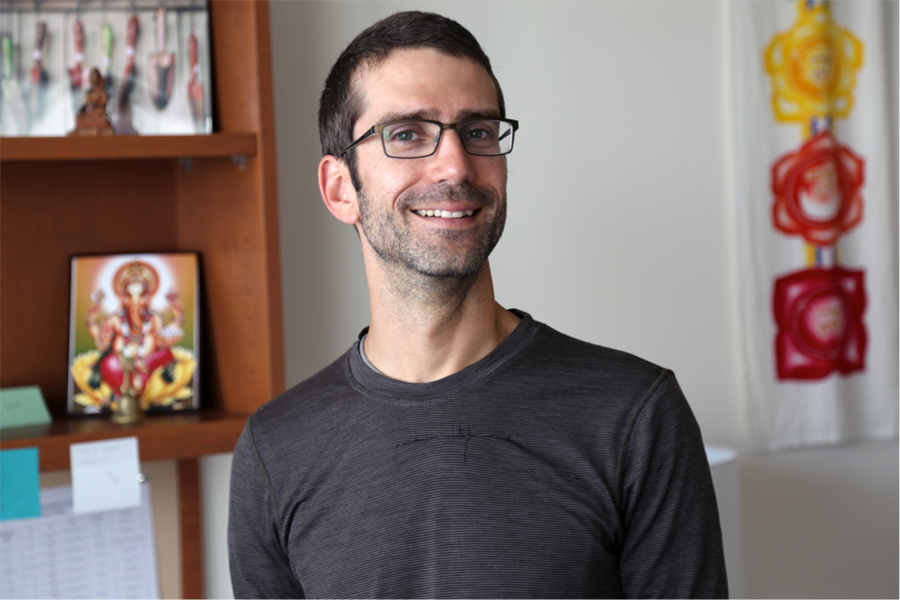 The universe is unraveling, but Danny Arguetty is hardly concerned.

To the contrary: when Arguetty is asked about strategies for overcoming challenges on the path to self-improvement in his capacity as manager of UW Recreation’s Mindfulness Program, he replies that first acknowledging, then embracing the universe’s disposition towards disarray can be a key step in centering oneself on the path to success.

“Everything is falling apart all the time—that’s how this planet was created—and we’re constantly contending with this entropic force, which is why commitment can be so challenging for people,” he says. “When I make a commitment, I need to be saying, ‘I know that’s going to want to unravel, because that’s the nature of things, but then how do I stay steady in that?’”

For Arguetty, whose work at UW Recreation involves crafting and leading programming of yoga and meditation classes and workshops, it’s a strategy of setting the terms of success, confronting the perceived bounds of one’s own potential, and tracing sensations of resistance to the root.

“When you sense you are resistant to something, it’s an opportunity to assess and ask, ‘Is it genuine? Have I tried that activity four or five times and I genuinely know that it doesn’t work for me?'” he says. “Or, is it the other side: that I’m actually resistant because this is actually good for me and it’s an activity that just requires a little boundary-setting or effort-making?’”

He says people will often resist engaging in practices they instinctively know are good for them—such as eating well, being active, or maintaining a positive mental outlook—for fear that any effort on their part will ultimately fail against the unyielding entropy of space and time; and that any sense of short-term victory—let alone lasting accomplishment—will only come from some Herculean force of will.

Not so, Arguetty says, invoking a concept called the 51% rule.

“We often think we need to do something 100% of the time to be successful at it,” he says. “But really, if you start to just edge toward a majority—if you can move your body in some way for 30 to 45 minutes, three-and-a-half to four times a week—that becomes a pretty amazing movement ritual.”

When it comes to mindfully making improvements, Arguetty is fond of the phrase “no pain, all gain” and brings the concept to the floor of the yoga classes he leads at the UW.

“It doesn’t have to be every single day; it doesn’t have to be super intense,” he says. “The basic movements you’re doing—walking up stairs, riding your bike, walking to town, walking back home, gardening, cleaning—that’s life. It’s about moving in a way that you’re living your life actively.”

It’s a lesson of a little going a long way that Arguetty learned, well, the long way—at least if you were to measure it in miles.

Born in Israel, he immigrated with his mother to Los Angeles when he was nine. In high school, he traveled to London to live with his father before returning to the U.S. to attend college at the University of Denver. Back in L.A. after graduating, he began practicing yoga for the first time. He soon moved again, this time to the East Coast, where he learned about Kripalu Center, a health and yoga retreat in Stockbridge, Massachusetts. In search of something new, he volunteered for a three-month stint.

“That was life-changing,” he says. “I really got an understanding of living yoga.”

Having grown up in cities his entire life, Arguetty says the retreat marked the first time in his life he was completely immersed in nature. On completion of his volunteer term, he traveled throughout India, exploring yoga’s roots, before returning to Kripalu to complete his teacher training. He’d continue working there for the next five years as a teacher and, eventually, workshop facilitator.

“What Kripalu was amazing at was facilitation,” he says. “It’s one thing to be a teacher; it’s another to know how to run and facilitate an experience for people that’s digestible, that’s kinesthetic, that’s interactive—I’m so happy to be able to bring that forth here as well.”

But after half a decade in the same place, Arguetty was again ready to move, heading west again to San Diego, where he started conducting teacher trainings and launched an advanced training in India. After living in rural Massachusetts, he found traveling for work—for yoga—to be invigorating. That is, until it was no longer.

“After a while, the travel became destabilizing and I wanted to be more grounded,” he says. In January 2016, he made the decision to quit everything, pack up his life, and move to Seattle.

In addition to teaching yoga elsewhere in the city, Arguetty began substituting at the UW Mindfulness Project, the original iteration of UW Recreation’s Mindfulness Program founded in 2013 by Alysha Greig ’15. Arguetty, who had served as a yoga instructor at Williams College for four years during his tenure at Kripalu, says he immediately recognized how much he loved the return to campus life. Later in the year, he began working part-time before being hired full-time to manage the program—now under the heading of UW Recreation—last March.

“It’s amazing,” he says. “I get to share with people the program, but also just spread the word on well-being.”

Last spring, he says Mindfulness Program sold more than 400 passes, which grant faculty, staff, and students unlimited access to yoga and meditation classes all around Central Campus. Set against the total population of the University, Arguetty says the number might seem “just a drop in the bucket,” but from his vantage point on the yoga mat, the level of interest was striking.

“It’s clear students are finding a benefit in it,” he says, adding that the opportunity to work alongside with the program’s student staff has proven both inspiring and energizing. “They’re still college kids, they’re still having fun, but they’re also invested in this other layer of their well-being and development and are really passionate about supporting other students to access that.”

Over the next year, Arguetty says a primary goal will be to continue to focus on teacher development, both in terms of the diversity of teachers and of teaching styles. Working with program staff, the aim is to impart a teaching methodology of accessibility that ensures the broadest cross-section of the UW community can benefit from Mindfulness Program’s offerings.

“That can be difficult,” he says of the last point. “A lot of that is knowing how to move people around a mat, being succinct and clear with body details, and making sure you convey postures in ways that people know what they are.”

In leading classes, Arguetty will sooner walk participants through a yoga pose’s component steps than introduce it upfront by its name. It’s part of the notion of moving mindfully by living the experience, rather than presenting people with movements to be memorized.

For his part, Arguetty says he’s found a comfortable pose professionally and as a practitioner. From an academic perspective, the UW couldn’t be a more natural fit: some of the earliest empirical research on mindfulness emerged from the University of Washington beginning in the 1970s. Now, several decades later, with much of the learning surrounding its practice internalized across UW campuses, Arguetty is ready to lead its next evolution—if not in theory, then certainly in practice. But with Arguetty, it often seems that the theory is practice—a weekly routine that’s well worth the effort.

“Why I love this position so much is that I do live this stuff,” he says. “Every morning, I have the opportunity to practice and, as a result, I’m pinching myself every day. I love the city I live in and the people I’m meeting and I love the impact I’m having and love that I get to do it in this context.”

The universe might be unravelling, but for Danny Arguetty, at the end of its thread, midst a sea of chaos, float islands of cosmic repose.

Join Danny and The Whole U this September as we welcome UW faculty, staff, and students to celebrate Yoga Month and push notions of wellness well beyond just physical health. Register today to attend free yoga classes throughout the month offered on all campuses as well as a celebratory class led by Danny himself. Learn more about the Mindfulness Program and purchase quarter-long passes here.