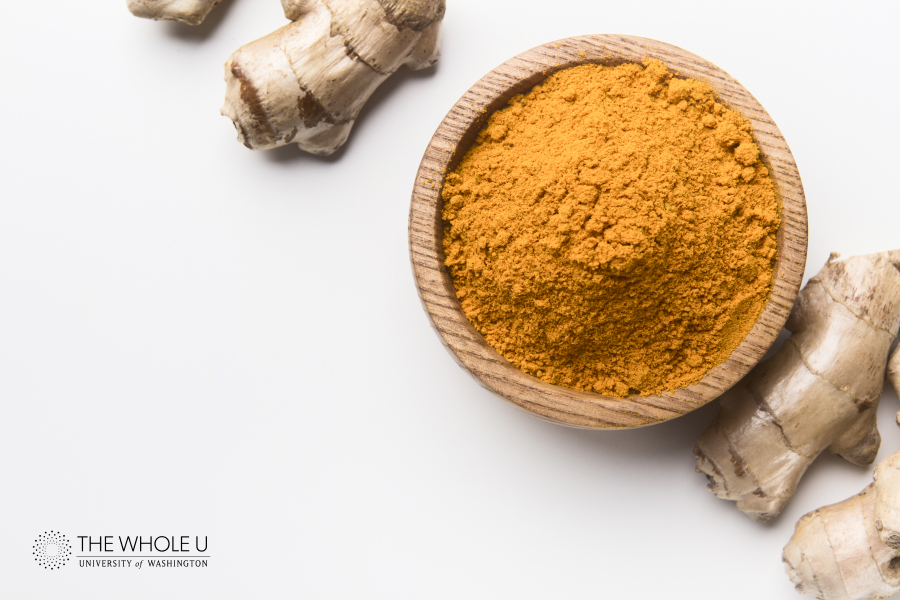 Turmeric. We see it bottled in health elixirs lining grocery store shelves and its benefits extolled on blogs around the web. But what exactly is this increasingly omnipresent orange-colored ingredient and, perhaps just as pressingly, how do you pronounce it? (It’s TER-muh-rihk, by the way.)

Turmeric is a perennial plant that comes from the ginger family. It has long been used as a spice when cooking Asian dishes and originated in Vedic culture in India. It probably reached China by 700 ad, East Africa by 800 ad, West Africa by 1200 ad, and Jamaica in the eighteenth century. Growing up, I watched my mom always adding a pinch of turmeric in almost all of her cooking. I thought it was to enhance the flavor of the dishes. It was. However, we now know that turmeric also has various health benefits.

Turmeric contains a compound called curcumin (on average, turmeric is about 3.14% curcumin) which has proven to increase cognitive function, is anti-bacterial, anti-inflammatory, and fights against multiple metabolic disorders and some cancers. It is found that curcumin contains the ability to inhibit pro-inflammatory transcription factors (NF-κB) in several types of cancer. However, studies also show that the amount of curcumin absorbed in the body is quite minimal due to its rapid metabolism and elimination from the body. Some studies conducted on rats and humans have shown that piperine, a compound in black pepper enhances absorption of curcumin by increasing the bio-availability.

Curcumin is only one of many beneficial compounds in turmeric. There are others which have not been studied as extensively as curcumin, but which are expected to also contain beneficial properties. While you can find turmeric supplements, taking high doses can be upsetting to the stomach and can also interact with various medications such as blood thinners. It is always recommended to check with you doctor when you plan to take food in drug form and it is important to note there is not one super food which can heal and nourish the body.

There are many additional benefits to a turmeric friendly diet. Including the following:

Protection against cardiovascular disease: Curcumin may help prevent clogged arteries, which are associated with blood pressure, by maintaining the health of the endothelium surrounding these arteries. Curcumin helps to protect against age-related loss of endothelial function and reduces likelihood of developing heart disease.

Diabetes: Curcumin may also help prevent diabetes through its anti-inflammatory and antioxidant properties, in addition to improving factors that contribute to diabetes, such as insulin resistance, hyperglycemia and hyperlipidemia.

Alzheimer’s Disease: Turmeric may also play a role in protecting your brain against common degenerative diseases such as Alzheimer. Turmeric may help to increase levels of brain-derived neurotropic factor (BDNF), a protein found in the brain and spinal cord that helps to keep nerve cells healthy and regulating communication between nerve cells, which is critical for learning and memory.

Depression: As with Alzheimer’s, lower levels of BDNF is also associated with depression. Due to turmeric’s ability to boost BDNF levels, the spice has shown promise as an effective anti-depressant.

Skin Health: Since turmeric has anti-inflammatory, antimicrobial and antioxidant properties, it may be an effective treatment for skin conditions including acne, eczema, photo-aging and psoriasis.

Please note that research around turmeric is still evolving and always discuss supplementation with your physician.

I’m always in favor of using turmeric as a spice and savoring the flavor. Here are a few dishes to consider preparing with turmeric and pepper:

Here is one of my favorite comforting rice dish recipes (can be substituted with quinoa): 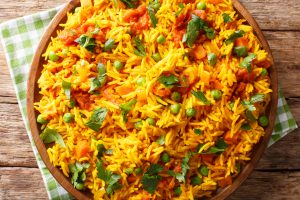 If you’re using freshly cooked rice, let it stand on the counter uncovered until it stops steaming before fluffing it. If you decide to refrigerate the rice overnight in advance of preparing this recipe, it will clump up; you can then use your hands to break up the cold rice clumps into individual grains.

Heat wok over medium heat, add the diced onion and bell pepper. Sauté for 2-3 minutes, add ginger and garlic, continue to sauté until raw smell is gone. Now add turmeric, salt to the mix and eggs. Cook until eggs are turning to golden brown (should be separated, not the scrambled egg texture.) Now add peas and stir fry continuously for another minute. Next, spread black pepper over the mix.

Finally add rice to the mix. Can be garnished with chopped cilantro.

This article was previously published by Julia Marnadi, RD, CD in 2018. It has since been updated with additional research by Kristine Carlson, RD.

Julia Marnadi, RD, CD is an inpatient dietitian for hematology oncology and bone marrow transplant population at UWMC. In her spare time, she likes cooking, spending time with her family, and running with her friends.

One Thought on “Spice of Life: Cooking with Turmeric”