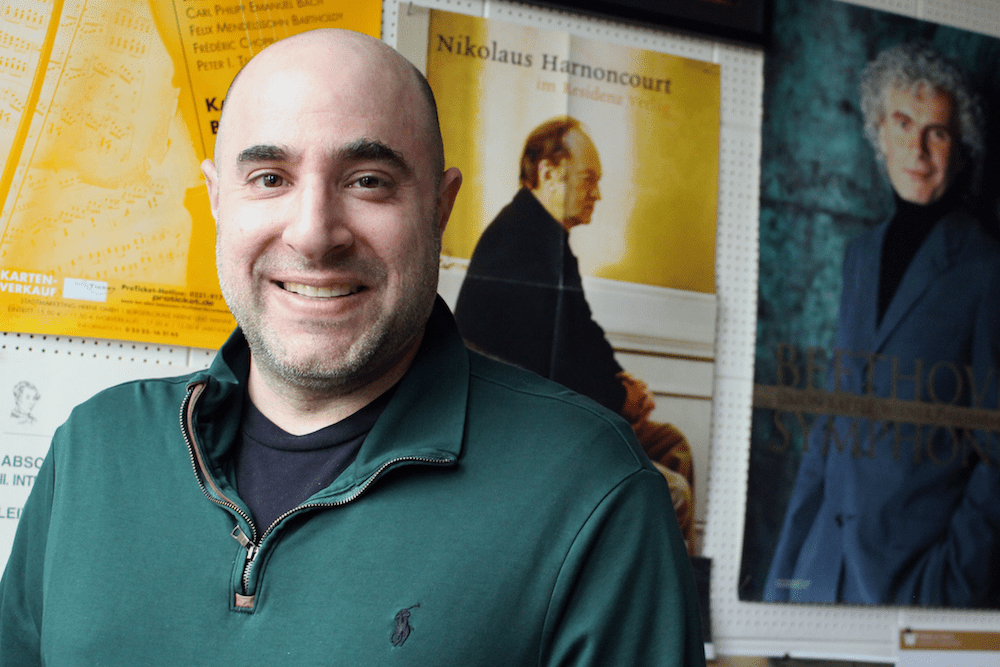 When David Rahbee began decorating his office after joining the UW School of Music as Director of Orchestral Activities and Chair of Orchestral Conducting in 2013, he immediately put up two posters. One was of Austrian conductor Nikolaus Harnoncourt. The other was of British conductor Sir Simon Rattle. Both served as influential way finders for Rahbee during the decade he spent living and working in Vienna, Austria between 2002 and 2010.

“I camped out in Vienna and learned as much as I could,” he says. “I knew that something was missing from my education and I wanted to go to one of the more important places where this genre of music came from.”

Rahbee initially only planned to stay in Vienna for a year, but a steady stream of work—including a job as an assistant at the Vienna State opera and an apprenticeship to Harnoncourt beginning in 2003—convinced him to stay on.

“Once I started, I realized how much I could get out of this; that I need to stay,” Rahbee recalls. “There’s no way I could be doing what I am doing today without that experience.” 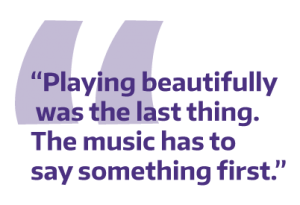 Something about how both conductors approached their music spoke deeply to him.

“They’re really creative interpreters always searching for something in the music that hadn’t been brought out yet by anyone else,” he says, explaining how playing beautifully, for them, was never enough.

“For them, playing beautifully was the last thing. The music has to say something first. What is this about? Why did the person who wrote this write this down? That should drive the tone.”

“They’re always probing and thinking about how things could be done better or differently. It was never routine. That inspired me to do the same. I heard them so often that that approach became a part of me—a part of my work.”

Rahbee says he knew he wanted to go somewhere where he could put all of that into practice. After completing his DMA in Montreal, he joined the faculty at the University of Washington. 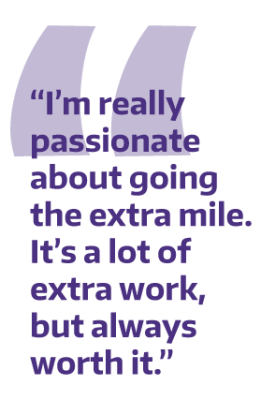 When he arrived at the UW in 2013, there was one orchestra. Today, there are three–all open to anyone regardless of major. The UW Symphony is made up of Music majors as well as students from across campus. In 2014, Rahbee founded The Campus Philharmonia, which is led by his graduate student conductors, with non-music students, staff and community members in mind.

“For a school with 40,000 students, I thought it was strange there was only one [symphony orchestra] because most of those students had some sort of music in their high school,” Rahbee says.

So why weren’t more students interested? Rahbee surmised (correctly) that it wasn’t because they weren’t interested; rather, busy schedules prevented them from making that commitment.

So he founded a second orchestra group specifically for students not pursuing music that would meet once a week for two hours. (By contrast, the UW Symphony rehearses are twice a week for a total of five hours.)

“Everyone’s learning how to prioritize the things they care about with the things they do,” Rahbee says. “I want to give them that flexibility.” The Campus Philharmonia turned out to be so popular that it has since subdivided into two orchestras; each led by one of Rahbee’s conducting students.

“I feel like the desire has been here, but the opportunity wasn’t always there for them,” he says. “I’m really passionate about going the extra mile and creating that opportunity. It’s a lot of extra work, but always worth it.”

It’s one of six concerts the UW Symphony gives each year and another demonstration of why Rahbee has placed among finalists for The American Prize National Nonprofit Competitions in the Performing Arts in the category of Orchestral Programming for four consecutive years, including 2nd place for the 2014-15 season of the UW Symphony, and 3rd place for the 2016-17 season. He also was awarded 2nd place in the category of Orchestral Conducting for the 2016-17 season.

“The conductor has a big challenge and that is to convince a room full of 70 fully educated, professional musicians to do something differently, the way you want it,” Rahbee says. “It’s hard, but that’s our job as a conductor.”

Rahbee’s approach has always been to follow his instinct.

“My instinct is to treat everyone like professionals no matter what level they’re at,” he says. “They’re all there because they care about music and they want to have a good experience. That’s how I’ve always approached it.” 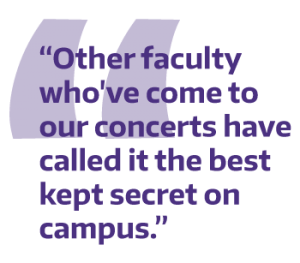 It’s an approach that has led Rahbee to lead orchestras as a guest conductor everywhere from Chattanooga to Armenia. Wherever he goes, however, there’s still a part of him that’s just a kid from Boston who grew up with music around the house.

“It was just something that was part of my upbringing,” he says, crediting his mother—a music teacher and composer—as a major influence. “It was part of a broad education, but not the only thing I was doing.”

When not out playing baseball, Rahbee played violin, piano, and composed music beginning at the age of seven. In high school, Rahbee began playing seriously and at a high level with Greater Boston Youth Symphony.

“I think that emotional maturity made something with the music resonate in me and made me want to be more serious about it and pursue a career in that direction.”

Rahbee says he hopes students experience a similar progression to self-discovery and personal growth through their involvement in the UW’s various symphony orchestras. And maybe others will discover them in turn when they attend a UW Symphony performance, including the one tonight at Meany Hall.

“Other faculty who’ve come to our concerts have called it the best kept secret on campus.”

David Alexander Rahbee holds a Bachelor of Music degree in violin and composition from Indiana University, a Master of Music degree from the New England Conservatory in orchestral conducting, and a Doctorate of Musical Arts from the University of Montreal in orchestral conducting. In addition to his work as a conductor and educator, he is co-editor of Daniels’ Orchestral Music (6thedition) and Daniels’ Orchestral Music Online (DOMO), the gold standard among conductors, orchestral administrators, orchestral librarians as well as other music professionals and students researching for orchestral programming.

Dr. Rahbee is quite possibly the best thing to have happened to the UW orchestral program in years! I worked extensively with him during my years as an undergraduate, non-music major member of the UW Symphony, Chamber, and Campus Philharmonia orchestras. His thoughtful and exciting approach to programming, commitment to artistic excellent, and general enthusiasm as a conductor cement him as one of the best parts of my college experience. He’s truly an inspiring teacher and mentor, in addition to being a wonderful conductor. As UW is a large, public research institution, most students tend to pursue studies in STEM fields instead of (or, in addition to) music/ liberal arts & humanities. For one reason or another, many students like myself who grow up playing music in school, youth orchestras, and other community groups, don’t end up pursuing music in college, but still want to remain musically active in whatever way they can. Furthermore, the School of Music, good as it is, simply is not nearly large enough to sufficiently fill ensembles. As such, the orchestras and most UW music groups are mix of performance majors, double majors, and truly students from all across the university. The Philharmonia—an orchestra initiated by David and former conducting graduate students for the purposes of getting them more podium time—has included not only students, but staff, faculty, and members community. Under Dr. Rahbee’s direction, UW orchestral activities has been a fun and meaningful experience for all capable, committed student musicians, majors and non-majors alike, who seek it out. He consistently ensures an inclusive space, while promoting and maintaining a high level of quality musicianship and professionalism.