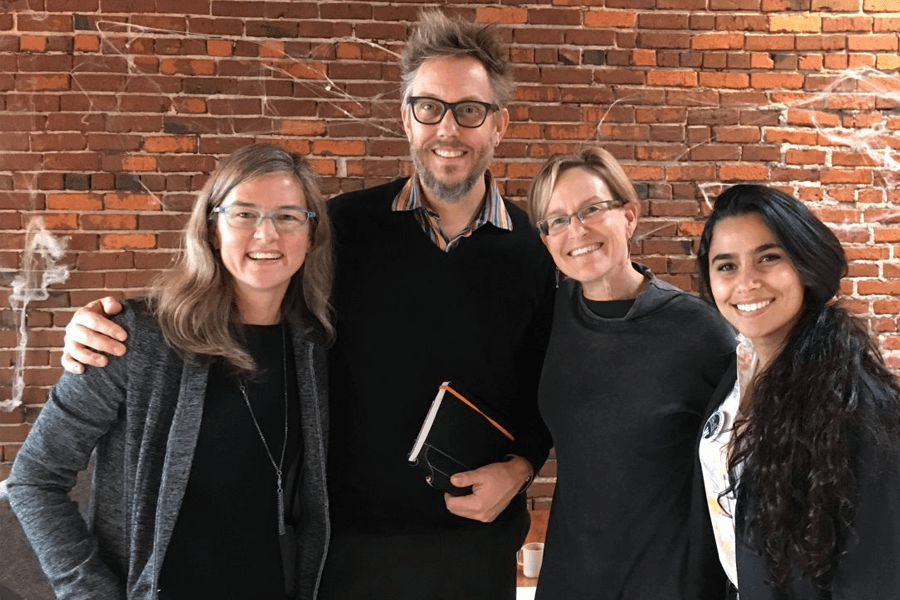 Food brings people together. In the case of the academic collaboration between Jennifer Otten and Branden Born, so did food policy. Otten, an associate professor in the Department of Environmental and Occupational Health Sciences and core faculty in the Nutritional Sciences Program within the School of Public Health (first from left above), met Born, an associate professor in Urban Design and Planning in the College of Built Environments (second from left above), at a statewide food policy council roundtable meeting in Olympia some seven years ago. 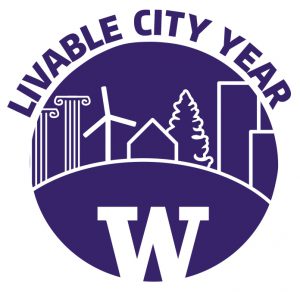 Born recalls colleagues mentioning Otten as a new member of the UW faculty with whom he really ought to connect as someone with an overlapping interest in food systems. When they finally got talking in the parking lot later that day, it was the beginning of something big.

Since 2017, they’ve served as co-directors of the University of Washington’s Livable City Year program (LCY), a cross-university collaboration with UW Sustainability and with foundational support from Urban@UW, the College of Built Environments, Undergraduate Academic Affairs and the Association of Washington Cities that connects local governments with UW classes to address community-identified areas of need.

“One of the things that I love about Livable City Year is that it can take many forms,” Otten says, adding that, at the beginning of a partnership, cities brainstorm as many as 50 projects for Livable City Year program participants to possibly work on. “We’re helping cities reach solutions around their livability through projects and goals that are set by the city. One of the things we encourage the city coordinator to do is go to all the different agencies within a city to pull projects so we can disperse those across the entire University.”

The coordinated, cross-discipline approach provides local partners with new options to enhance sustainability and livability elements within extant and future projects and programs. UW students and professors work to advance the city’s goals for livability and sustainability throughout the academic year.

This month, the city of Sultan, Washington, population 4,651, became the latest locality to partner with Livable City Year, following Auburn, Tacoma, and Bellevue in successive years since the program launched late in 2016.

“We are excited about our partnership with Sultan because it will help us understand the needs of small communities and how the university and LCY can support them,” Born says. “In addition, Sultan is not only located in a beautiful place at the foot of the Cascades, it is also a welcoming and tight-knit community with untapped potential.” 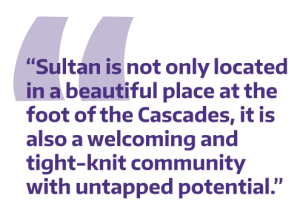 Livable City Year’s partnership with the City of Bellevue during the 2018-2019 academic year involved 300 students working on 30 projects spanning disciplines that included Urban Design and Planning, Civil and Environmental Engineering, Environmental and Forest Sciences, Communications, Public Policy, Political Science, Business, Architecture, Landscape Architecture, Law, Emergency Preparedness, Communication Leadership, IT, Nursing, and Public Health. Classes from all three UW campuses participated. That breadth of connection is one of the aspects of the program Born says he loves most.

“One of the reasons LCY has such an appeal for me is that I think it’s a terrific pedagogical model for students to apply themselves and learn in an experiential way, but it also works well for the University to be developing stronger relationships with the communities around it,” Born says. “This is an opportunity to work with other colleges across all three campuses and fold them into in a pretty neat program.”

Born acknowledges that community-engaged learning is something that is done all the time by faculty in different units across the UW, but he posits that Livable City proposes a more permanent framework for achieving higher levels of impact.

“We think of our program as under one big purple ‘W’—all campuses, all units; if you want to be a part of this and you have a class and the city has a project that you think you’d like to do, we’re delighted to have you.” 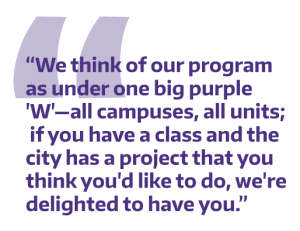 Faculty can also propose projects that get pitched to the city. Last year, Bellevue accepted about half of the proposed projects. Otten and Born also take pride in the fact that Livable City Year keeps collaboration cost-neutral for participating departments. It’s a matter of matching the energies and abilities of the University, students, and faculty with the needs of the city.

“Cities have a bunch of questions, challenges; they want the most cutting edge research, but don’t have time or the ability to get it or the resources to address all of the things they want to address, so they do the best they can,” Born says, adding, “Universities have lots of cutting edge knowledge and they have students who are interested in doing something that’s meaningful.”

Toward the end of the yearlong academic partnership, LCY hires students to write, edit, and design reports containing project findings that are then presented to cities. Otten says cities have described the results as a “force multiplier,” while Born describes the end-result as “a really nice output that has a lasting legacy.”

“It’s meaningful on both sides. The city gets a ton of work—some of it really innovative and super creative with recommendations that nobody expected because students are pretty amazing,” Born says. “It’s not always perfect, but across the board, the level of value-add that this kind of program gives to a city is so big and so much more than a one-off project ever could. The number of projects, the scale, can really add up to a meaningful impact in a community.” 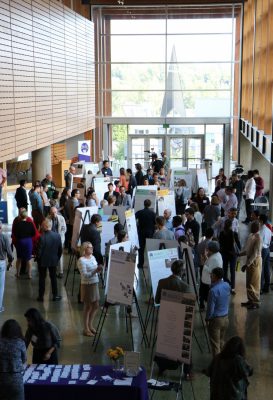 In 2016, a contingent of students from one of Otten’s undergraduate classes assessed how unused food in Auburn’s schools could be used as an additional resource for community food security. A team of nine undergraduates visited 18 of 22 schools to observe lunchrooms, tabulating cost and logistics for picking up surplus food and getting it to the food bank.

“They created a PowerPoint for every school and rolled it all into a report for the whole school district,” Otten says. “That report has been shared many times over and was the first paper an LCY student turned into a published thesis and a published manuscript.”

Another group of students studying landscape architecture embarked on a self-directed project to reimagine the function of an alley space next to Auburn’s arts center.

Faculty and students from the Evans School helped Tacoma conduct an analysis of racial bias in the prosecution of misdemeanor cases by the City Attorney’s Office in the Tacoma Municipal Court, later replicated for Bellevue. Meanwhile, industrial engineering students who styled themselves “SnowDawgz” developed optimal routes for snow plowing in Bellevue using digital mapping and cost analysis.

“They wrote the code, they trained the city transportation staff, and city staff estimate it’s going to save Bellevue 13% on their snowplowing budget,” Born says, adding that such projects not only help cities, but also open students to the possibilities of working for cities whose employees are aging rapidly toward retirement.

“Cities are really interested in getting young people onto their staff to serve in public service roles,” Born says. “Students don’t necessarily think about how they can be a city manager or comptroller.”

Otten and Born found their way to Washington from Texas and Wisconsin, respectively. A former geologist, Born refers to himself as a “reformed natural scientist” whose desire to explore “the intersection of environment, people, planning and policy” prompted him to leave a career in the private sector. 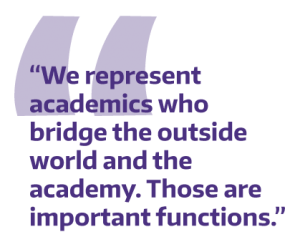 “I found that I wanted to connect the hard sciences with direct consideration of how they engage with institutions and social structures, and that led me to urban planning,” he says.

Otten became interested in food from a young age after her grandfather passed away from a heart attack and her father took it upon himself to change the family’s lifestyle in hopes of preventing one of his own.

“We were the weird family in Texas who had Kashi cereal before people had heard of it and ate eggplant instead of chicken Parmesan,” she says.

In addition to co-directorship of LCY, Otten and Born share an interest in camper vans and the outdoors. Otten recently purchased a new one and Born owned a 35-foot-long school bus named Lucinda for twelve years before it became too difficult to find parking for it in Seattle. That shared passion beyond their interest in food systems reflects an open-mindedness and eye for off-the-beaten-track opportunities that extends to their work at the UW.

“We represent academics who bridge the outside world and the academy,” Born says. “Those are important functions.”