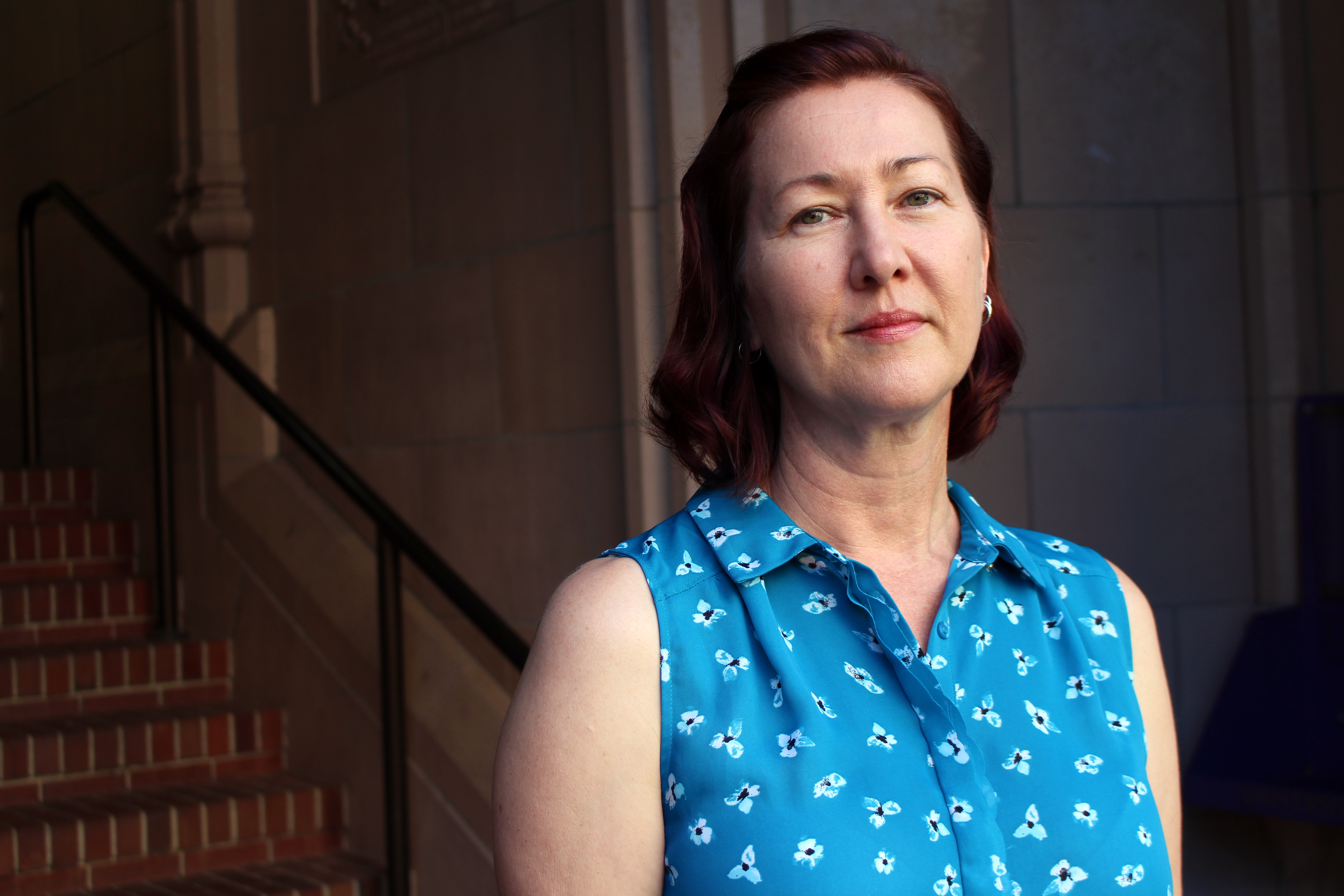 “Mostly my summer has been devoted to monsters—dragons, revenants, werewolves, that sort of thing,” says Urbanski, a senior lecturer in the University of Washington Department of History specializing in France and England in the 12th century. As she prepares to teach seminars this fall on Tudor England and on Monsters & Monstrosity in the Middle Ages, she’s hard at work on a book that has grown from the latter. 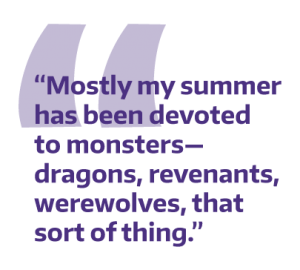 “Over the summer, I’ve been doing research on the book and updating the seminar to reflect some of the themes that are going into the book which haven’t been in previous iterations of the seminar,” she says. “I’ve been interested in monsters for a very long time and I thought why not do something that I find very interesting and that students and people in general really interested in.”

Actual monsters such as dragons and ogres comprise one component of the book, but it doesn’t stop there.

“Actually, it doesn’t even really begin there,” Urbanski says. “It examines ancient, medieval, and modern ‘monster theory’ and deals with questions like what is a monster and why should we study them and takes a position that monsters do a lot of important cultural work.”

Urbanski contends that human cultures project fears and anxieties into the monsters we create as “cultural productions,” helping us define and discern what means to be human. The book also treats with how clerical and secular authorities deployed the rhetoric of monstrosity to delegitimize and demonize various groups, such as women, Jews, and Muslims.

Devotee of the “deeply weird”

There’s something about the weird, wild nature of monsters and conceptions of the monstrous that draws students to Urbanski’s seminar, now in its eleventh year. That same element of the “deeply weird” is what drew Urbanski to the field of medieval history in the first place and what keeps her so passionate about it to this day.

As an undergraduate at the University of California, Berkeley, Urbanski was toying with the idea of being an English or Biology major until she took a class taught by medieval historian Robert Brentano—the kind of professor who’d assign students abstract, open-ended essay prompts such as “what color is the Song of Roland?” 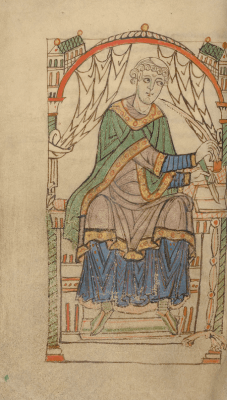 Reading an anecdote about a large trout from a contemporary biography of St. Anselm by Eadmer (above) inspired Charity Urbanski as an undergraduate to study the history and art of the Middle Ages.

One of Brentano’s assigned readings was the Eadmer of Canterbury’s contemporary hagiographical account of the life of St. Anselm.

“In writing about saints lives there were fairly rigid genre conventions,” Urbanski says. “And I get to a chapter called, ‘How a trout of unusual size was caught for his dinner as he had foretold.’ I practically dropped the book laughing out loud, like, ‘did John Cleese write this?’ The ability to predict rather large fish for dinner just got me.”

To this day, Urbanski uses humor and satire extensively in her seminars: showing clips from movies like Monty Python and the Holy Grail to illuminate concepts like chivalric poetry and literature for students’ further investigation. She also has students create their own video projects inspired by the British television series “Horrible Histories,” which spins real history into entertainment without sacrificing its educational value.

“I try to intersperse humor in my seminars,” Urbanski says. “The professors I enjoyed the most always had a sense of humor.”

The results bear out. This past year, Urbanski was recognized with an Honors Excellence in Teaching Award, a student-nominated award that recognizes professors for their inspiring courses and willingness to connect with students.

Undergraduate students who recommended Urbanski for the honor described her as a professor who “delights in helping every student find their unique voice,” and “encourages students to pursue projects that are personally meaningful to them.” 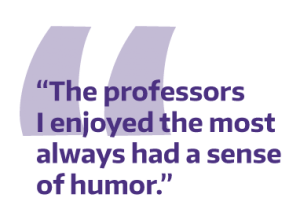 Urbanski says she appreciates the recognition—and that “it’s deeply gratifying to know that they enjoyed the experience as much as I did” But even without it, she says wouldn’t want to be doing anything else. Having the ability to help college students understand the “actual work that goes into history you often really don’t see”—from navigating the research process to developing a unique voice as a scholar—is part of why she describes the UW History Department as her “intellectual home.”

“Getting to college and taking your first college level history course was a revelation for me—and I think it is for most students,” she says of how her own learning experiences translated to her teaching today. “As a student, I initially was like, ‘History is really interesting, but it’s already done. What are you going to do?’ But in fact there’s so much of it; not that we’re just still trying to understand, but that we’re trying to refashion for present purposes.”

Depending on where we are as a culture, we tend to ask different questions, Urbanski says: “We go back to the same sources many times, but we’re coming with a different eye, looking for different things, interested in asking different questions than a historian 100 years ago was going in with.”

Urbanski says she hopes that her work as an educator and an historian can serve to help others challenge assumptions held about the past and its influence on the present.

“[The period] occupies this mythic status in our modern conceptions of the Middle Ages but most of what we think we know about it is pretty much dead wrong,” she says. “What I do in my teaching is try to break down modern misconceptions.”

Urbanski is eager to impart students with a sense of history’s narrative through its longterm currents.

“One of the things I try to do in my teaching is connect the Italian Renaissance to a lot of the intellectual and artistic currents that were already set in place—many of them in the twelfth century—and how they directly feed into later periods,” she says, adding that the twelfth century (what is often referred to as the High Middle Ages) is an “incredibly rich, dynamic period when you start to see a remarkable interest in individuals and intellectual ferment.”

She addressed that ferment in her first book, Writing History for the King: Henry II and the Politics of Vernacular Historiography (Cornell University Press, 2013), which examines the politics of vernacular history writing in England through a focus on two of the earliest vernacular histories produced in Old French: Wace’s Roman de Rou (c. 1160-1174) and Benoit de Sainte-Maure’s Chronique des ducs de Normandie (c. 1174-1189). 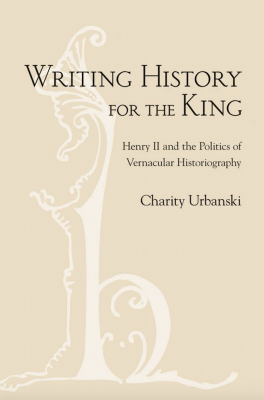 Published by Cornell University Press in 2013, “Writing History for the King” is at once a reassessment of the reign of Henry II of England (1133–1189) and an original contribution to our understanding of the rise of vernacular historiography in the high Middle Ages.

“I argue that Henry commissioned these histories of his Norman ancestors as part of a larger political program to restore royal power after two decades of civil war, that he attempted to marshal the past to enhance his authority and secure the succession of his children,” she says. “I explore how the authors entrusted with this project turned their histories into forums for debating royal policies and used history writing to endorse or undermine the king.”

Wace was effectively fired from the project 14 years in and replaced by Benoit de Sainte-Maure, who was happy to write a version of history more amenable to the tastes of the legendarily short-tempered, but energetic and effective Henry. Urbanski says the great utility for students studying historiography is that it’s a skill they can extrapolate into life and the world today.

“One of the things I’m always trying to impress upon my students is that we are still dealing with fallout from things that happened 1,000 years ago,” she says. “Cultural attitudes and institutions were forged in the Middle Ages—things that we take for granted—permeate our culture. The medieval world is what sets the stage for the world we live in today. To bring that in and get students to recognize the medieval roots of cultural attitudes and institutions—and to question them—is important.”

In other words: if students come in search of dragons, they’ll be sure to find them—along with so much more.

I KNEW dragons existed! And now there’s someone with proof. Loved this article and will actively seek to participate in her classes and seminars. I completely agree that the mindset and actions of history plays a part in our time and its important to view those with a discerning eye. Thank you for this article!

I’ve enjoyed this faculty spotlight piece immensely and look forward to Urbanski’s forthcoming book on Monsters. Reading about her passion for teaching and how she elucidates the arcana of scholarship reminded me of teachers I had in pursuit of my BA in English (1990-94) and how very much I appreciated them. Thanks for the inspiration!