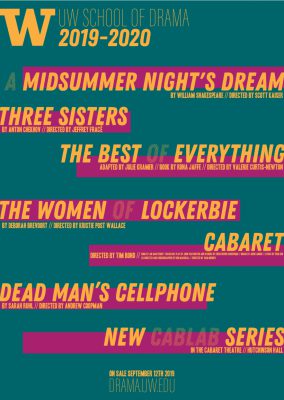 As a playwright, Holly Arsenault writes mostly comedies, but she takes her work as director of engagement for the UW School of Drama very seriously.

“For me, next season has already started,” she says, referring to all the public shows the UW School of Drama will present in the 2019 and 2020 academic year.

In addition to her responsibilities in the realms of student recruitment, branding, and purveying public information, she has a subscription season to sell.

“One of the ways that Drama and the other arts units at the UW are different from a traditional academic department is that we sell tickets to a public-facing season of work,” she says. “In some ways we function like a theatre company inside an academic department.”

After faculty determine the next season’s run of shows early spring quarter, Arsenault spends much of her time over the next several months thinking about how to ensure those productions are “as accessible as possible to as many different people as possible.”

But even with so much going on, summer is also the time of year when Arsenault says she feels she can think most “holistically” about her work supporting UW School of Drama: “How does the work of the engagement team support what I’m hearing from faculty, staff, and students as far as what they’re wanting the school to do?”

“I like thinking about mission and how we can use the tools we have to serve our mission better,” Arsenault says. “And I’ve had the opportunity to be a part of bigger conversations about what we want this school to be.” 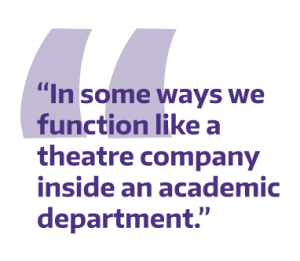 That her perspective is valued is one of the things Arsenault says likes most about working at the UW and with the UW School of Drama in particular.

“Having been a student here, then an alum, as someone with outside experiences as a playwright and a working theatre artist, I’m able to be ‘out’ as an artist in the context of the work that I do here,” she says. “All of that is part of my identity as the director of engagement for the School of Drama.”

Away from work, Arsenault is an acclaimed playwright, crafting plays hailed as “almost clinically observant” in their discussion of families—”biological, chosen, and circumstantial”—and the complicated women who hold them together. But her journey to feeling comfortable calling herself a playwright was one of self-doubt before striking success.

Born in Montréal, Quebec, Arsenault discovered her love for theatre as a child growing up in Spokane. She started appearing in plays when she was six and continued acting throughout high school, before realizing in college that she disliked auditioning. Drawn instead to producing other people’s work, she served as president of the Underground Theater Society, and credits UW for providing her “a ton of leadership and learning opportunities.”

Even so, Arsenault recalls that, upon graduating, she did not quite know where her place was.

A desire to be a professional dramaturge (a specialist tuned to the “research, history, structure, and theory of plays—essentially how plays work”) led her to accept an internship at Seattle Repertory Theatre. She thought she’d be reading plays all day, but was assigned to the casting office instead in what she calls, “a life-changing year working with amazing artists.” 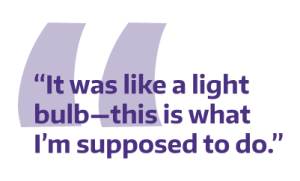 But even as she made connections throughout the greater Seattle theatre scene, Arsenault admits that she still felt “a little lost.” That was until one of those connections, Meghan Arnette, the artistic director of Live Girls! Theater, one day asked her to write a short play.

Arsenault took up the challenge, composing a short five-minute play and, later, two 10-minute productions. The second of those 10-minute plays, 24 Pictures of a Pilot, was named a finalist for the Heideman Award at the National 10-Minute Play Contest at Actors Theatre of Louisville and is published in Rain City Projects’ Manifesto v. 2, edited by Steven Dietz.

“That changed everything for me,” Arsenault says. “It was like a light bulb—this is what I’m supposed to do. I was probably 25 when that happened and, after 19 years of doing theatre and devoting my life to it and not knowing where I fit, to realize, ‘I’m a playwright and this is my way of making a contribution to this art form that I love’—was such a good feeling and from there I never stopped writing.”

In 2013, her first full-length play, Undo, was recipient of a Theatre Puget Sound Gregory Award for Outstanding New Play and a Seattle Theater Writers Gypsy Rose Lee Award for Excellence in Local Playwriting. Having begun writing it two years before, Arsenault finished writing around the time she gave birth to her son. The events are inextricably linked in how Arsenault conceives of herself as an artist. 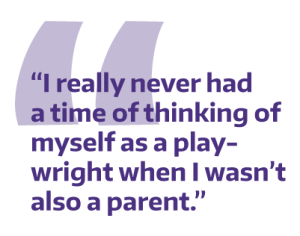 “I really never had a time of thinking of myself as a playwright when I wasn’t also a parent, which is significant for me,” she says. “I don’t think that’s a coincidence; I think that those things happened simultaneously in my life for good reason.”

She says she realized she had been holding herself back from writing because she was afraid to fail.

“It takes a lot of courage and I didn’t have it for a long time and then I had a kid and it was like, how am I going to say to him, ‘Be brave and pursue your dreams and go boldly in that direction.’ I realized that if I expected him to do that, I had to do it, so that was ultimately what pushed me over that cliff to put my work out there.”

Arsenault sees other parallels between being a playwright and a parent: you can’t half-commit to anything and you come to know the how much use can be made of short periods of time.

“I write under pressure really well—that’s part of being a writer and a parent,” she says. “I can get a lot done in 45 minutes, because that might be all the time that I have. I think about my work a lot during the day, but when I sit down to write, I don’t spend a lot of time staring at a blank screen. It has to come out.”

Arsenault says the most difficult part of balancing a career as a theatre artist and arts administrator is finding “mental and emotional space to make your art” while also giving her all to a job she loves.

“The way that I make sure that my playwriting life isn’t subsumed by the other parts of my life is by committing myself to projects so that I have no choice but to write,” she says, adding that she needs the pressure of collaboration in order to produce and that she counts herself lucky in that regard. 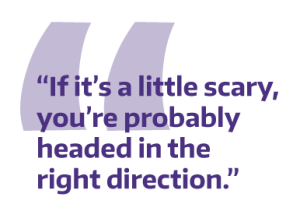 “For the last ten years—really ever since I started identifying as a playwright primarily—there’s never been a time when I wasn’t writing toward a specific project, working with a company that was either going to produce the play or a reading—something at the end of the line.”

Ask Arsenault for one piece of advice for breaking out as an artist and she’ll tell you, “If it’s a little scary, you’re probably headed in the right direction.”

Ask for another, and Arsenault levels: “You’re either doing the work or you’re not. We give ourselves a lot of excuses for why we’re not doing the work, but at the end of the day, a writer writes, an artist makes art. A lot of people have good ideas, but you have to do the work.”

The same applies to her duties at the UW School of Drama—filling seats and student rolls while fostering enduring connections and learning experiences. When Arsenault really needs to get some writing done, she’s not averse to using time off. When she does, she says she feels supported by the School of Drama all the way.

“They want me to continue my life as an artist.”

Holly holds a BA from the University of Washington School of Drama. She is a member of the Dramatists Guild of America, an alumna of the Seattle Rep Writers Group, and a current member of the Northwest Playwrights Alliance writers group. Catch her latest work this fall: Expand Upon: Homelessness with Mirror Stage, Oct 5-13 | Overcoming: Six Sage Stories of Strength with Mampsh Productions at 18th & Union Oct 10-20.