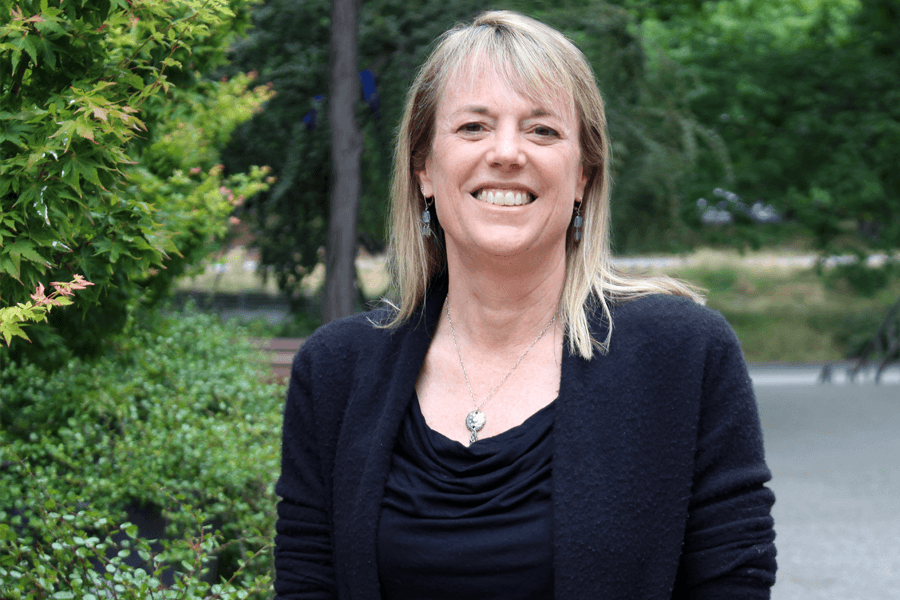 What will UW Medicine look like in 2025? How can the health system expand and expedite access for patients? What more can be done to help the Northwest’s largest network of hospitals and clinics find firmer financial footing in order to better serve the region?

Those are a few of the big-picture questions Lisa Brandenburg mulls over mornings on her bike commute to UW Medical Center. As chief health system officer for UW Medicine, it’s her job to lead the team to answer those questions—and then develop and execute a plan that transforms those answers into actualities. Arriving to work, her focus is fixed on the future, but for finding the daily drive in a career as complex as leading a major healthcare system, she looks to her past.

“The biggest reason I got into doing this kind of work is because, as a kid growing up in a small town in central California, my father had a lot of complex health problems,” she says. “He had polio as a child and then as an adult had post polio syndrome as well as heart disease and eventually he went blind.” 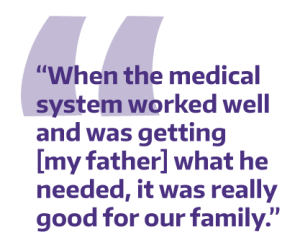 Growing up in Los Banos, then a town of 10,000 people, Brandenburg recalls how difficult it was for her father to get consistent, well-coordinated specialty care.

“What I saw in that experience is that when the medical system worked well and was supporting him getting what he needed, it was really good for our family,” she says. “When it wasn’t working well, it had a big impact on our family [for the negative].”

Brandenburg first realized she could take steps to improve the systems that had given her family such a difficult time while working in a medical office as part of a work-study job as an undergraduate studying physiology at UC Davis. It was there she developed what she calls her “drive for daily improvement.”

“What I realized was I really enjoyed working to make the process work better for patients,” she says. When staff at the medical office asked if she could be office manager full-time, she had to turn them down as she still had to finish her studies, but the experience encouraged her to believe she was capable of making positive, lasting change in healthcare.

“It’s exactly that experience that drives me to do this work,” she says. “There’s room for improvement in healthcare—here and everywhere—and being able to feel that I am part of making that impact is really important to me.”

After graduating from UC Davis, she earned an MBA and Master’s in Public Health from UC Berkeley and moved to Phoenix, Arizona to work in a small hospital system. Three years after that, she relocated to Washington for a job as manager of the outpatient cancer center at UW Medical Center. Seventeen years on, Brandenburg was serving as UW Medical Center’s acting executive director when she accepted an offer to join Seattle Children’s Hospital as president.

Since rejoining UW Medicine late in 2017 in her current role as chief health system officer, Brandenburg says her drive to make daily improvements remains as strong as ever.

“We’ve really needed to pull together as a system and say, ‘How are we going to be everything that we can be?'” she says, adding that her threefold focus has been on system-wide finances, access, and clinical growth. “We are making progress; we have incredible potential and have the best people working here.” 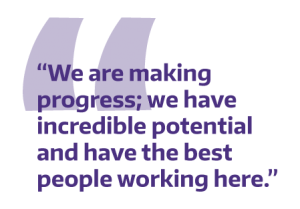 In her first six months, Brandenburg embarked on a listening tour, getting out to speak with as many of the more than 25,000 people working within the UW Medicine health system as possible. One of her main takeaways from those conversations was about ease of access.

“We have a major system initiative to make our access a lot better with the goal that any new patient can be seen within seven to 15 days, with a shorter waiting period for areas such as primary care and cancer patients.”

As part of that effort, Brandenburg established a priority access line for faculty and staff at (206) 520-5050.

“As staff or faculty of the University of Washington devoting so much of your time, energy, and life to this place, you should be able to get your healthcare here if you want to,” she says.

The access line is just one short-term step in the direction of improving access for patients system wide. For Brandenburg, that must begin by ensuring the people who work at the UW are well taken care of so that they can provide the best possible care for everyone else.

“The secret weapon in healthcare,” she says, “is recruiting and retaining really good people.”

Under Brandenburg’s tenure as president of Seattle Children’s Hospital, it was ranked among the 100 best places to work in the United States. So what is the formula for making someplace a great place to work?

“You hire great people, keep developing them, and keep them supported,” Brandenburg says. “Places people want to work do a really good job connecting people to why they’re there, what they’re doing, what success looks like, and how we’re working together toward that. People want to be recognized, supported, and they want to be part of something bigger.”

And when it comes to a health system like the UW’s, Brandenburg believes bigger can be better.

“We’re the place that can take care of you soup to nuts,” Brandenburg says. “Hopefully you never need the kind of comprehensive, complex care that we offer in this system, but one thing that sets us apart is that, if you do, we can take care of it.”

Brandenburg says one of her favorite aspects of working within UW Medicine is that it’s “full of the smartest people around.”

“We are the innovators. It’s the smartest people interacting with each other to drive even more creativity,” she says. “We are the place that can fix some of these problems we struggle with in healthcare. If I can be part of making that happen, that’s my dream.”