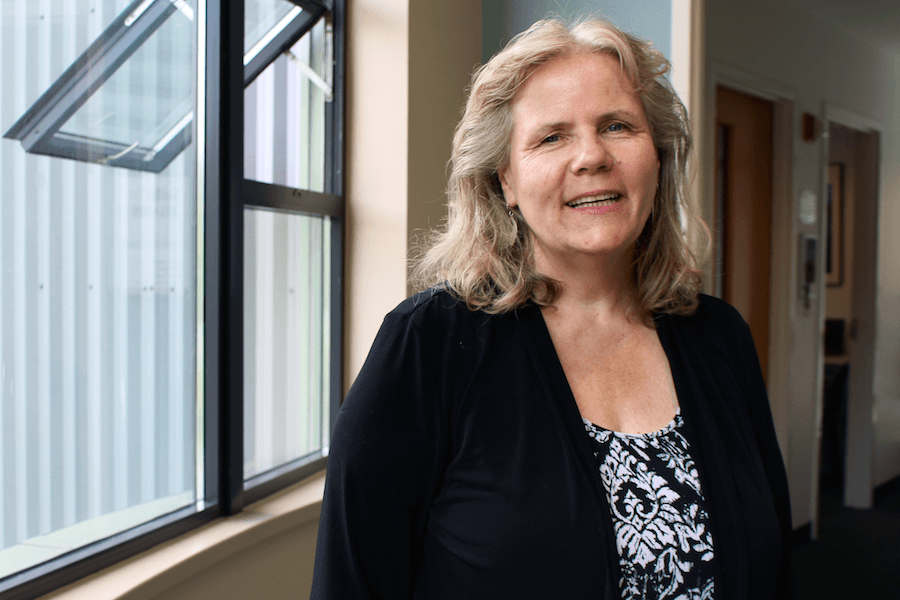 For social work professor Karen Fredriksen Goldsen, the celebration of LGBTQ Pride is a matter of public health.

“Invisibility creates vulnerability and tends to lead to very poor health outcomes,” says Fredriksen Goldsen, professor and director of Healthy Generations Hartford Center of Excellence at the University of Washington.

She’d know, having served as lead on the landmark study Aging with Pride: National Health, Aging, and Sexuality/Gender Study. The first federally funded longitudinal national project of its kind, it examines how various life experiences are related to changes in aging, health and wellbeing over time among midlife and older LGBTQ adults. For the past decade, the study has followed 2,450 LGBTQ individuals ranging in age from 50 to 102. 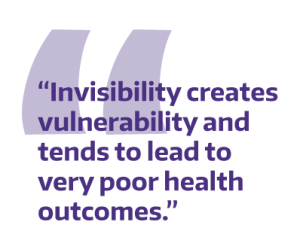 “Experiences of lifetime victimization, discrimination, and social isolation are really significant predictors of negative health outcomes,” Fredriksen Goldsen says, adding that, by contrast, opportunities that connect people and elevate them to visible status within society—such as the Pride movement—often serve as catalysts for healthier individuals.

“It’s exciting to link this [research] with Pride and the Stonewall Riots of 50 years ago. We have found that LGBTQ elders built their communities and laid the foundation for much of the progress that’s enjoyed today. LGBTQ elders have a lot of strengths, resilience, and fortitude against all kinds of odds.”

But, much like in the fight for LGBTQ rights and equality writ large, the path to “legitimizing” academic inquiry into issues surrounding LGBTQ health has been hard won—something Fredriksen Goldsen knows first-hand.

Working on a doctoral dissertation examining concepts of caring across all generations, she wanted to include as demographically diverse a sample as possible in her survey, so she added a question on sexual orientation.

“I then received a call from Human Subjects and it was said I could not include sexual orientation and sexual identity or any question to get at sexual or gender minorities or LGBTQ people. They said it was too private and that people would likely never participate or self-identify. That was in about 1992.”

In completing her dissertation—The provision of informal adult care: The impact of family and employment responsibilities—she found she could work around the imposed stricture by asking subjects about their partner status instead, which allowed her to begin looking at caregiving through the perspective of same-sex couples.

Even so, the experience made her realize just how invisible LGBTQ groups were. She determined to continue exploring that line of inquiry—in spite of naysayers who claimed such research would at once prove next to impossible to conduct and, even if study participants could be found, would only make LGBTQ populations more vulnerable and stigmatized.

But Fredriksen Goldsen never accepted that premise. In continuing her research at the University of Washington after receiving her doctorate from the University of California – Berkeley, she was able to demonstrate through pilot studies that researchers could reach LGBTQ adults. Contrary to prevailing academic opinion, they were more than willing to participate—indeed, she found aging LGBTQ adults made some of the best research participants.

Within two months, she’d gathered a sample of 2,450 individuals. Over the last ten years, the Aging with Pride study has maintained a 94% retention rate and just received funding for its next five-year period. 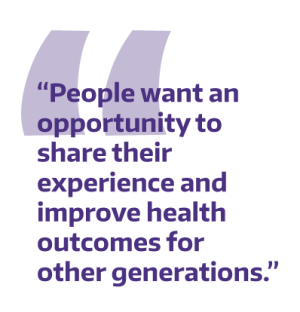 “People want an opportunity to share their experience and to improve health outcomes for other generations,” she says. “LGBTQ people do experience very significant health disparities, especially due to environmental obstacles.”

At early ages, for example, they are more likely to having higher disability rates, psychological and mental health disparities, and recent analysis based on national data indicates that they’re more likely to have nine of twelve chronic conditions.

The study tracks the factors influencing or associated with those disparities—the social determinants of health, wellbeing, and aging—as well as what is working. 60% of the LGBTQ older adult population are aging well.

“Why are people aging well given what they’ve encountered in life?” is one question Fredriksen Golden asks, especially when considering 66% of those surveyed had experienced instances of victimization or discrimination three or more times in their lifetime.

She found that aging well is often linked to LGBTQ older adults’ resilience and in building communities among their peers. However, as is true for many people, those communities of support often thin with age, causing many to lose their only safety net in the absence of children or others they can look to for support.

“What was important for us was to use the information gained from the longitudinal study and being able to understand trajectories and how people age to develop interventions,” Fredriksen Goldsen says.

Creating opportunities for visibility as well as culturally responsive environments is one of the most important factors in caring for aging LGBTQ adults.

“That essentially tells people it’s okay to be their true selves—just to be themselves,” she says. “LGBTQ elders are everywhere and you may or may not know you’re talking to an LGBTQ elder and you may never know unless you’re creating a really open and supportive environment.”

Fredriksen Goldsen has been able to develop interventions and other initiatives aimed at reconnecting aging LGBTQ adults to a community.

Co-led by UW Nursing professor Linda Teri and taking place in the Seattle, San Francisco, and Los Angeles metropolitan areas, Aging with Pride: IDEA (Innovations in Dementia Empowerment and Action) is the first federally-funded project testing a program designed to improve quality of life for LGBTQ people who experience memory loss or who help those experiencing memory loss.

Older adults with memory loss participate with an informal care partner (either person must be LGBTQ), meeting with a coach to learn exercises and strategies related to memory loss across nine in-person sessions over six weeks as well as follow-up phone calls. 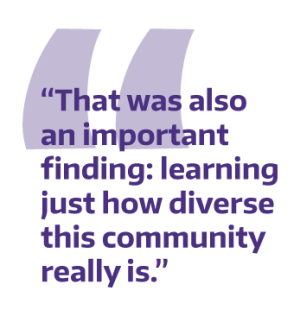 Fredriksen Goldsen is also spearheading a comprehensive investigation of health, economic and social inequities with Washington LGBTQ communities for people of all ages, Washington State Equity and Diversity Project, while also working on a study focused on Socially Isolated Older Adults Living with Dementia.

Despite prevailing views that extreme discrimination and victimization as well as everyday insults—such as jokes and microaggressions—have reduced with time, her findings show that even younger LGBTQ-identifying people are not necessarily experiencing improvement in their own health outcomes.

“Between those 50 to 64 compared to those 65 and older, there isn’t that much an improvement in health,” Fredriksen Goldsen says.

“Still, people are encountering adverse kinds of experiences that bring them back to earlier experiences or that compound into an everyday wear-and-tear that leads to poor health outcomes overtime.”

Fredriksen Goldsen says it’s also important to not think of LGBTQ as a monolithic group. Lesbian and bisexual women, for example, have higher rates of disability than gay and bisexual men. Transgender older adults are more likely to have experienced higher rates of victimization and discrimination.

Bisexuals are also an at-risk group. Her study found they tend to have larger social networks, but don’t rely on them as much for social support, which in turn makes them less visible as the group least likely to disclose their sexual orientation.

“That was also an important finding: learning just how diverse this community really is,” she says.

The community is also evolving. A growing number of people today identify as queer rather than as lesbian, gay, bisexual, or transgender, which presents an interesting challenge in this type of research, Fredriksen Goldsen explains. In the longitudinal study, she found creative ways “to maintain the scope and parameters of the project while being responsive to the cultural changes in the world.” 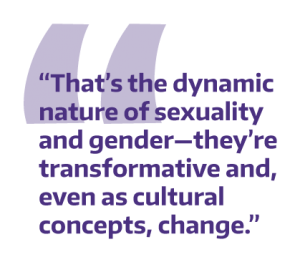 “That’s the dynamic nature of sexuality and gender,” she says. “They’re transformative and, even as cultural concepts, they change.”

A more informed view onto successful systems LGBTQ adults devised and applied to live and thrive can tell us much about how we can approach solutions for widespread societal problems such as social isolation. Studying LGBTQ health outcomes as a determinant factor in making progress for all in 2019 is a far cry from the prohibitive academic and social environment Fredriksen Goldsen encountered in the 80s and early 90s.

As a young adult who lost a partner to an aneurysm, Fredriksen Goldsen says “there was no discussion on dying or grief in the community and no support in the community. This was pre-HIV/AIDS.” Visible LGBTQ elders were next to nonexistent.

“Obviously people had died through time, but I wasn’t aware of people having similar experiences in terms of ensuring there was support,” she says. “I also didn’t see the visibility of any older adults or ensuring they could access services.”

That lack of visibility, she says, was one of the reasons she became interested in populations that have been marginalized or disenfranchised or are otherwise vulnerable and lack access” and why, as a sixth-generation resident of the Pacific Northwest, she takes pride in being able to give back to the region and LGBTQ communities through her work at the UW.

“I’m from a pioneer family. I’m really interested in the history of this area, because my family experienced and lived it, but I’m also very much interested in working to help and improve the community,” she says. “Watching this area evolve and change and thinking about how we can maintain community is really important.”

She says she loves working with students to create “linkages” between what happens at the UW and the wider world. 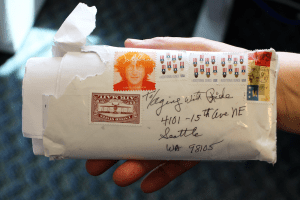 A letter received from an Aging with Pride study participant.

“The School of Social Work itself really supports being able to work within historically disadvantaged populations.”

“It’s part of our mission and they were willing to support it really early on—even when people thought this work couldn’t or shouldn’t be done.”

A testament to that: the Aging with Pride study frequently receives something akin to “fan mail” from its longtime participants. Fredriksen Goldsen produces an envelope stuffed with poetry—just one of many missives her office has received.

“People really share a lot with us,” she says. “They have written in and said, ‘I don’t know why there’s not a place for me to put my name of this survey because I really want to be visible.”

Hello Karen,
It was great to read about you and your research! It’s such important work. I live in Salt Lake City now. Am still connected with the SSW as a “senior paper grader,” for the 571 that Kendra Roberson teaches.