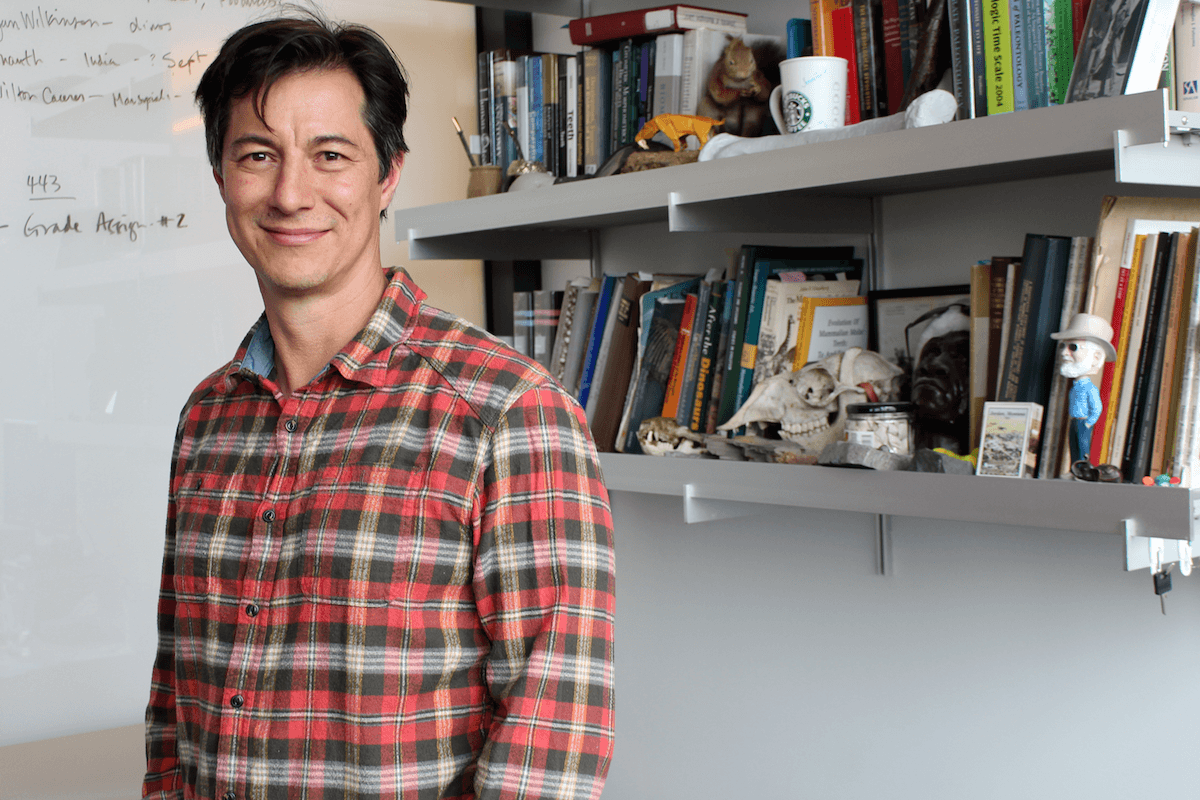 If UW biology professor Greg Wilson had a time machine, he’d dial it back 66 million years to the last days of the late Cretaceous—a period when Tyrannosaurus rex and Triceratops still thundered across the Montana badlands and small mammals—none larger than a modern raccoon—scurried along the ground. The area he’d visit is known as the Hell Creek Formation and is one of the richest and most intensely studied fossil sites in the world.

“I’d go and see what it was like in those last days before the world changed completely,” says Wilson, an associate professor of Biology at the University of Washington. “It’s a pivotal moment—just before things go to hell.” 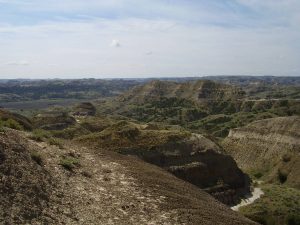 Stretching over parts of Montana, North Dakota, South Dakota, and Wyoming, the Hell Creek Formation is one of the richest and most studied fossil sites in the world. (Photo: Vladimír Socha)

But Wilson doesn’t have a time machine, so he must travel via a different mode of transport—a thin band of rock known as the Cretaceous–Paleogene (K–Pg) boundary. This geological signature, he says, indicates the point at which worlds diverged.

“You can put your finger on where debris fell from the asteroid impact that hit southern Mexico 66 million years ago,” he says, referring to the visible layer of rock deposit that resulted from the cataclysmic event widely believed to have wiped out the dinosaurs and 75% of mammals on earth.

As a paleo-biologist, Wilson is especially interested in this interval of time when all dinosaurs (save for birds) went extinct and the period that followed that witnessed new and different mammals emerging as biology’s heirs to the planet.

“There’s a window of about 3 million years that stretches across the K-Pg boundary between the age of dinosaurs and the age of mammals,” Wilson says. “What we see [during this time] are vertebrate communities—lizards, salamanders, frogs, mammals, fish, dinosaurs—changing.”

Hastening that biological change in the 500,000 years leading up to the asteroid impact event were volcanic eruptions in what is now India. Wilson describes those functioning alongside the impact event as a sort of “one-two punch” in which atmospheric changes occasioned by eruptions caused communities to change in response. 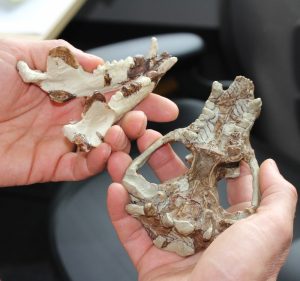 Wilson holds the skull of a Didelphodon. About the size of an opossum, it was the largest mammal that lived in the late Cretaceous. “The teeth are bulbous, meaning it probably was crunching down on hard objects like shells or bones. This guy had a huge bite force for its size.”

“We’re trying to monitor that [change] by looking at different horizons through this 180-meter section of rock,” he says, referring to the total exposed area available to be studied at Hell Creek. “Each horizon at which we find fossils, we can use it as a snapshot to see how the communities are doing.”

In his work, Wilson is especially attuned to mammal tooth shape, from which he and other researchers can deduce things like body size, taxonomic information, and likely diet. He contends that mammals that ate insects fared far better in the fallout from the asteroid impact, because insects could feed on dead plant material remained largely unaffected.

“Low and rounded cusps on teeth indicate a diet of fruit, whereas sharper cusps would indicate a likely need to puncture carapaces of insects,” he says. “Those animals linked to detritus-based food webs, not living plant-based food webs, are buffered from the mass extinction.”

But teeth can tell us even more about mammals—including that it was likely not just the extinction of dinosaurs that sped the way to their rise to dominance.

A new study published in the journal Proceedings of the National Academy of Sciences identified three factors critical in the rise of mammal communities since they first emerged during the Age of Dinosaurs: the evolution of tribosphenic molars (complex multi-functional cheek teeth) in mammals; the rise of flowering plants (angiosperms); and the extinction of non-avian dinosaurs, which reduced competition between mammals and other vertebrates in terrestrial ecosystems. 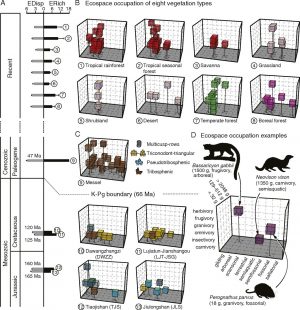 “The old theory that early mammals were held in check by dinosaurs has some truth to it,” Wilson said in an April interview with the Burke Museum. “But our study also shows that the rise of modern mammal communities was multifaceted and depended on dental evolution and the rise of flowering plants.”

The 240 eco-cells covered a broad range of body size, dietary preferences, and ways of moving (locomotion) of small-bodied mammals. When a given mammal filled a certain type of role or eco-cell, it filled a spot in the ‘Rubik’s Cube’.

The method provides the first comprehensive analysis of evolutionary and ecological changes of fossil mammal communities before and after K-Pg mass extinction.

“I try to follow what questions I have and then learn the techniques I need to answer them,” Wilson says. “Paleontology is cool in that there are a lot of different sciences that intersect it in ways that are really taking paleo into a new dimension.” 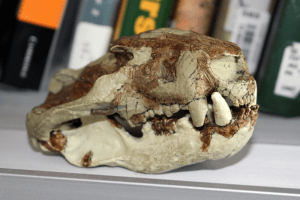 That Wilson found his way to paleo-biology in the first place was something of an accident. A captain of the Stanford men’s soccer team, he was on a pre-med track before his brother— a paleontologist at the University of Michigan studying dinosaurs—got him interested in the field.

“I was always into anatomy and, as a kid, I was into mysteries, so toward the end of my time at Stanford, I really kind of stumbled into being interested in what kind of cool questions I could answer with biology, including these questions around the extinction of dinosaurs and the rise of mammals,” Wilson says.

After his first taste of field work spending four months in Niger’s Sahara Desert with a team from the University of Chicago, Wilson applied to graduate school at UC Berkeley.

Once there, his advisor, Bill Clemens, only furthered his budding sense of inquiry (Wilson has a custom-designed bobble-head figure depicting Clemens on a shelf in his office).

After receiving his PhD in Integrative Biology in 2004, Wilson spent seven months of an NSF Postdoctoral Fellowship in Helsinki, Finland before taking a curatorship at the Denver Museum of Nature & Science. In 2007, he moved to Seattle to start in the Biology Department and also serve as Adjunct Curator of Vertebrate Paleontology at the Burke Museum.

This quarter, Wilson is teaching a course on the evolutionary history of mammals and their ancestors that draws on the Burke’s collection and co-leading a seminar exploring overlap between ecology and paleontology. 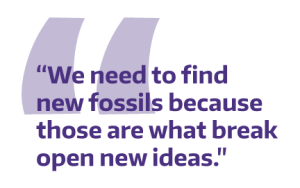 Looking ahead to summer, he’s preparing for the field season—his favorite time of year.

“I love to go in the field to places like Montana and India to discover new fossils, because new fossils are the life-blood of what we do—they are the data,” Wilson says.

“If we keep looking at the same data from fossils that are in museum collections over and over again, we won’t be able to expand our view on things. We need to find new fossils because those are what break open new ideas.”

Wilson says that while he also loves getting behind a microscope to make observations and working with students and colleagues on projects in labs, but feels that getting out into the field is what imbues students with “an instantaneous understanding of what paleontology is about in a way that I can’t do in the classroom.”

Each summer, Wilson will take 10-12 students into the field for three weeks to “get the real experience of paleontology” with a week of lab work on either end.

“It’s giving them some sense of the life that lived before them—the landscapes, the climates, the plants and the animals—this pageantry of different segments of our evolutionary history,” he says. “That, to me, is best told in those rocks and letting students see the landscape and understand the clues that are in the rocks and experience that process of discovery.” 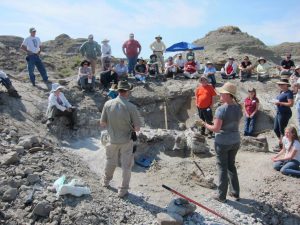 Wilson also brings K-12 teachers into the field via the Burke Museum’s Discoveries in Geosciences (DIG) Field School—a four-day experience that each summer that provides opportunities for teachers to participate in paleontology fieldwork, collaborate with paleontologists, and develop resources, curricula, and knowledge to apply in the K-12 classroom. Since 2010, nearly 200 classroom educators and 16,000 students from throughout the United States have participated.

“We teach teachers how to lead what we’re doing as researchers and, on the last day, we talk to them about how to translate the experience into the classroom,” Wilson says, adding that he and his team then send teachers’ schools sediment samples for students to sift through. 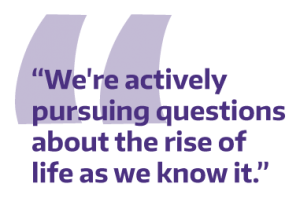 “These are real bags of dirt we’ve collected that produce small fossils. They sort through it under magnification and pull out fish scales and dinosaur teeth, mammal jaws, and so on,” he says.

“They get a sense for what a particular locality had and they record the information and send it to us and then we incorporate that into the Burke Museum’s catalog.”

In addition to the thrill of finding and identifying fossils, Wilson says he hopes the exercise leads students to experience “that Eureka moment.” It’s the same feeling he hopes visitors have when they visit the New Burke museum.

He’s excited about the museum’s new exhibits, especially the ones he and three other UW Paleontology curators created with the goal of showing the public that paleontology is not a static study.

“It’s a science of dead things, but it’s a dynamic, living science in that we’re actively pursuing questions about the extinction of dinosaurs and the rise of life as we know it today,” Wilson says.

“Our work is featured in a way that will communicate to the public and the broader university that the UW has a really prominent paleontology group doing a lot of cutting edge things.”

The New Burke, in the end, may prove time machine enough. 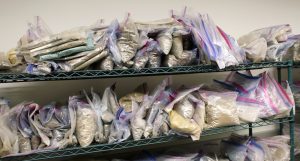 On October 12, the Raymond M. Alf Museum of Paleontology recognized Wilson with the Alf Award for Excellence in Paleontological Research and Education at the annual Peccary Society dinner.

The award honors a paleontologist who demonstrates exceptional achievement both in original scientific research, as well as in education and outreach at the primary and secondary school (K-12) levels.