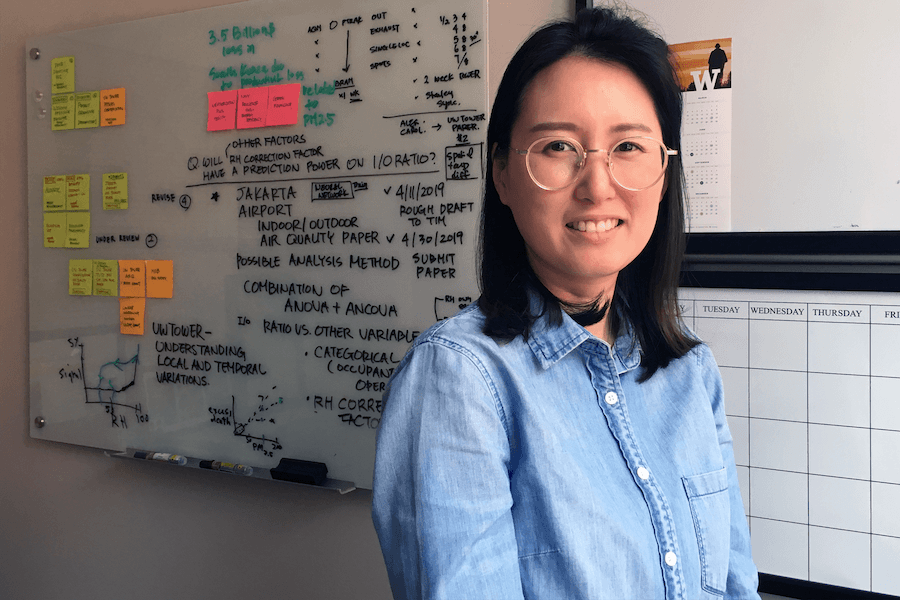 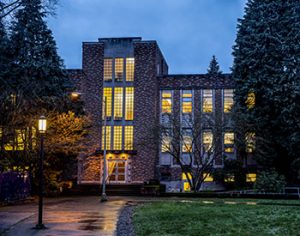 More Hall, home of UW’s Civil Engineering Department, was built in 1946 before its infrastructure was remodeled from 1993-96.

When More Hall was built in 1946 as the new home for UW’s Civil Engineering Department, architects Bebb & Jones emphasized function over form.

The building’s art deco design incorporated lighting from large windows to convey the feeling of spaciousness, while the buildings location adjacent to the Northern Pacific Railroad allowed for a spur track capable of carrying materials directly into labs.

But what was considered cutting-edge in 1946, could today feel a bit retro—especially to anyone whose work centers on the interactions between healthy building design, occupants, and building operations.

So as I approached the building to interview assistant professor Amy Kim about just such topics, I knew I had to ask her: what does it feel like working in a comparatively older building when her work is so focused on optimizing workplaces for the future? Her answer surprised me.

“Working with older buildings has been more rewarding—it’s not the easiest—but solving these small challenges in existing buildings is really complex and the complexity adds a bit of fun—at least to me,” she relates. “With preexisting buildings, there are so many things you need to work through and you have to realize people have already been accustomed or conditioned to the space and how things are operated.”

This April, Kim is being recognized for her work towards meeting those challenges with one of UW Sustainability’s annual Husky Green Awards for leading the research on human-centric lighting. (Read more about all award-recipients here.) 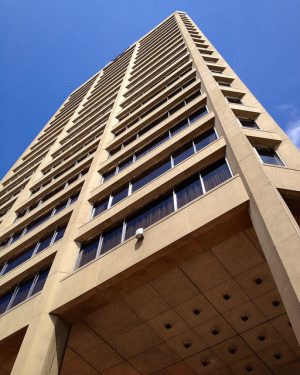 “If you’re working on a new building, it’s nice because you have the complete blank slate that allows you to do early planning and engage multiple stakeholders to get feedback,” she says. “If you do it right, it might become a really nice building.”

Kim continues to lead efforts assessing the impact of energy efficient and sustainable measures on the indoor environment, and in turn, on occupants’ job performance and wellbeing on the newly retrofitted UW-IT floor in the UW Tower.

“How do you make people more happy and productive inside buildings because that’s ultimately what helps organizations?” is the question Kim says she always asks herself.

“Buildings can be designed to nudge you to do things and to act differently in a space,” she says. “Given that we spend 90% of our time indoors in developed countries, why are we not connecting building environments—not just to being happy—but all the way down to the profit of the organization and its ability to thrive.”

In working with the Tower for the last five years, Kim says she’s found it to be like “a living lab”—one that has allowed her to develop better understandings of what operational strategies work best in safeguarding the health of the occupants. She credits UW Tower Facility Manager Troy Swanson and his team for having helped make her research possible.

“For the projects conducted in the UW Tower, she has held numerous informal meetings (including poster sessions, cupcake meetings, etc.) with occupants to promote the sustainable and healthy building concept and raise their awareness on the subject,” Dr. Wang again wrote of Kim’s efforts. “These outreach activities have helped the occupants better understand the purpose of her research and build support over time.”

Kim also got students involved. Her “Healthy Building” class worked in groups and helped with the preparation of Fitwel Certification of the UW-IT floor in the UW Tower building.

“These outreach activities in research and teaching have shown her dedication in building community support and providing education of sustainable practices,” Wang said.

In addition to her work on improving environments in the UW Tower, Kim is also studying how fine and ultra-fine particles infiltrate work environments during wildfires as well as how to improve community resilience through conventional and renewable energy systems in buildings.

“We’re advised to go inside during wildfire season, but then we don’t really know what’s going on in these buildings,” she says, crediting collaboration with colleague Tim Larson, an expert in outdoor air pollution. ‘At the minimum, a good shelter should have good mechanical systems to protect them—that’s how we should be looking at community resilience.”

Additionally, she is currently working to build relationships with universities in Indonesia to exchange knowledge and conduct research in the global context—specifically studying the air quality at Jakarta’s international airport, which in the next decade, will become busier than ever. 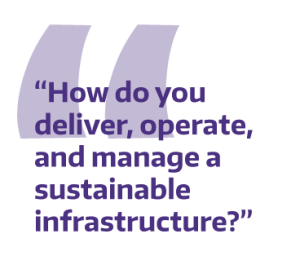 After growing up between Korea, Louisiana for elementary school, Oregon for high school, she graduated from the University of Illinois and spent close to a decade working on public infrastructure in Chicago.

On the way to earning a PhD at Texas A&M University, she began to hone in on two topics: building energy efficiency and management of infrastructure.

“How do you deliver, operate, and manage a sustainable infrastructure and how teams manage decisions?” she asks, rhetorically, adding that she tries to motivate her students by emphasizing the “soft skills” that bridge sound ideas in engineering with impactful action.

“I try to motivate my students by telling them they’re already smart—that engineering is good, but that you also need to start to understand the business and people perspective of how things occur in order to to make great projects.” Ultimately, she says, a well-engineered workspace has to be “good for people, good for environments, but also benefit the bottom line.”

Factors to consider include: access to lighting (including circadian lighting that changes with the daylight), thermal comfort (and the ability to regulate temperate), good acoustics, air quality (as CO2 levels rise, workers tend to feel more sleepy) and having access to healthy food (which often takes the form of ditching the vending machine in favor of something more plant-based). When it comes to making preexisting workplaces more conducive to being active and personal fitness, Kim encourages people to look to campus as a building environment unto itself. 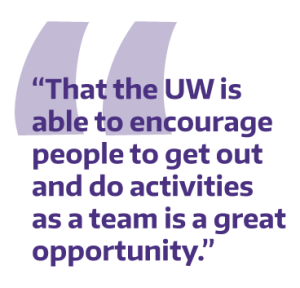 “That the University is able to promote and encourage people to get out and do activities as a team is a great opportunity,” she says. “If we can’t put down a gym in your office basement, then, as a minimum, as a University, suggesting activities like walks and yoga and making time for that can be huge. Activities programs like The Whole U are leading have a lot of meaning.”

Looking around campus—especially at all the nearby trails and pathways—Kim says she doesn’t think Huskies always take full advantage of it.

“People don’t like change. Period. I’m guilty of it too: saying, ‘Let me just finish this and then I’ll start doing something,’” Kim says. “But you just have to slowly inch the little things.”

For her part, Kim has made subtle updates to her office space in More Hall. In addition to a standing desk, she’s added cork floors, whose natural springiness makes standing easier. She also has a step machine she can use while standing and LED lights with day/night functionality.

“A little change can be good,” she says. “Because, before long, it becomes a habit.”

Amy Kim served as a contributing member on the UW Green Building Committee for developing the next generation of UW’s Green Building Design Guideline for the UW Capital Project Office from 2016 to 2018.

She was invited to be a member of the US Green Building Committee LEED Pilot Credit Committee, the Human Centric Lighting Society, and the Health in Buildings Roundtable by National Institute of Health.

Nice feature, thank you. Amy reminds us about the Three Ps of sustainability (people, planet, profit); and I especially like that she highlighted the role of soft skills, namely because tech alone will not solve all our challenges. But you knew that 🙂 Now everyone please take a walk — on campus, or off — or both!