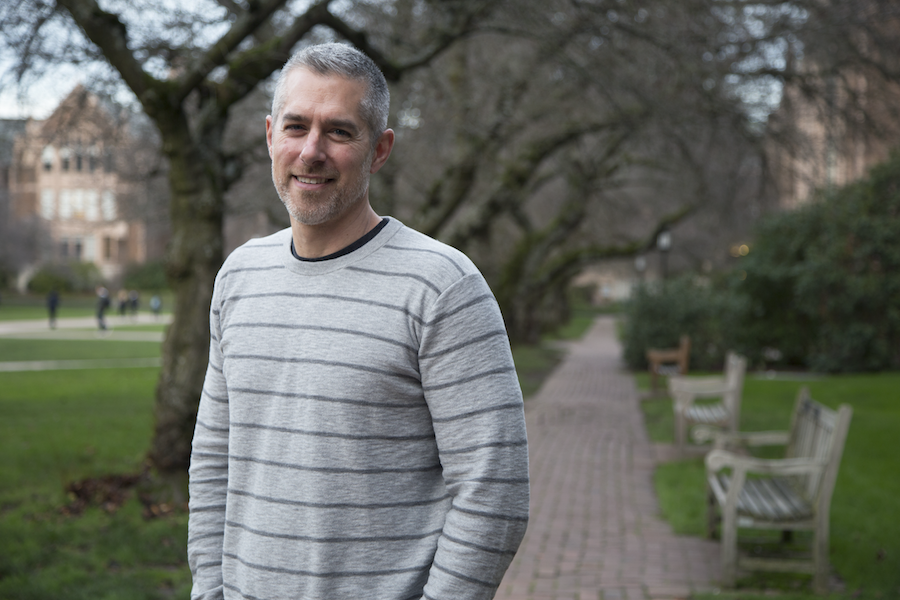 If Adam Warren could time travel, he might head to Mexico City in the 1920s—the period immediately following a decade of revolutionary war that was, in his view, “a moment of radical new ideas and imagining how Mexican society might be transformed.” Then again, Warren says he’d have to consider other areas of his research when choosing a destination.

An associate professor of Latin American history at the University of Washington with a special focus in science, medicine, and the study of indigenous peoples in Peru, he might instead travel to Peru’s Spanish colonial period—specifically to the second half of the 18th century when policies known as the Bourbon Reforms sought to redefine colonies’ relationships with the Spanish government in Madrid on matters ranging from taxes to medical practices. 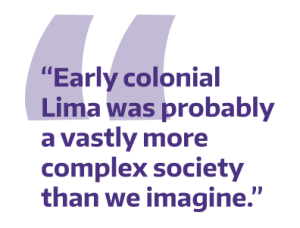 But why stop there when he could be tempted to travel all the way back to Lima in the 1530s. The city was founded in 1535, just three years after a group of Spanish conquistadors led by Francisco Pizarro infiltrated and ultimately overthrew the Inca Empire. Established near the coast in a difficult-to-attack location, Lima would serve as Spain’s new colonial capital.

“In terms of early colonial Lima, one of the things that we’ve learned is that it was probably a vastly more complex society than we imagine,” Warren says. “In the first decades following its foundation, it quickly became a crossroads and space of encounter for Spanish settlers, people of African descent, and indigenous peoples not just from the Peruvian coast and Andes, but also from places as far afield as Central America.”

Warren admits there would be elements of that world that would be “absolutely horrifying, especially the conditions under which people were forced to travel and work,” but from an historian’s perspective, it would still be fascinating.

“To see Lima as the center of an empire really far from Spain’s centers of power would be interesting and to imagine the people in this world whose experience was never narrated.”

As an historian, it’s the voices that don’t carry down to the present that interest Warren most—and which present the greatest professional challenge. Voices like those of 22 orphan boys who voyaged from A Coruña, Spain in 1803 as part of a royally chartered expedition to bring the smallpox vaccine to the Americas in what Warren and others call, “the first modern global health intervention.”

In that instance, the boys served as carriers of the small pox vaccine and were accompanied by a coterie of nurses and doctors who kept the vaccine alive on the trans-Atlantic—and later trans-Pacific—passage by transferring it from boy to boy.

Or the voices of family members in places like Mexico and Guatemala who, when their loved ones died during complicated births, struggled with whether or not to comply with a mandate from Spanish authorities and the Catholic Church that priests, surgeons, and midwives perform the cesarian section to ensure the fetus wouldn’t perish unbaptized. Warren is currently at work with two colleagues at NYU and Penn State on several publications related to that campaign, including a monograph that offers an historical reconstruction of the campaign behind this effort.

Or, yet still, those voices of the indigenous Peruvians who accompanied the Yale Peruvian Expedition in 1911—who in fact showed expedition leader Hiram Bingham III the location of Machu Picchu—but who were also the subject of side-studies that involved measuring and photographing their bodies. 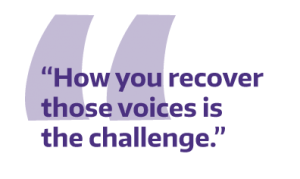 Warren says that pseudo-scientific practice, known as anthropometry, was “a key form of research in racial science that took place in the US and elsewhere in the first decades of the 20th century.

“How you recover those voices is the challenge.

“What’s been interesting for me, jumping back and forth between the 18th and 20th century in my research is to think about how the questions I ask and methods I employ for reconstructing human experience in the 18th century differ from those I use when analyzing materials from the 20th century.”

For Warren, inhabiting the mind of an historical author is one of the aspects of his work he enjoys most. “To interpret historical documents, you have to learn how they were organized, how they were meant to circulate, and tease out what the person who made the document sought to accomplish,” he says. “That can be really fun, but it can also take time.”

This winter and spring, Warren is embarking on an American Council of Learned Societies Collaborative Research Fellowship during which time he’ll work on finishing the monograph on the 18th century spread of knowledge about how to perform the Caesarian operation as well as travel to Guatemala, Colombia, Chile and Argentina to conduct more research. He says probing 18th and 19th-century medical records and legal documents for cases of the cesarean operation can be like looking for a needle in a haystack.

“Often the archives you want to look at are not well catalogued and reading through and figuring out what an 18th century document is about presents challenges,” he says. “The handwriting is different. There’s often shorthand terminology to puzzle through. Sometimes the ink is burnt through the paper due to its acidity. And in terms of the Caesarean operation, the actual cases are few and far between and scattered across different kinds of records.”

But again, that’s all part of the challenge.

“You have to put yourself in the mindset of the person compiling this material to understand the logic that has shaped the structure of a document,” Warren says. “How did the person making it imagine it and how did it correspond to what was actually taking place that he or she was witnessing?”

Home away from home

The first thing Warren talks about when asked how he came to be interested in the history of science and medicine in early modern and modern day Peru is that he’s not from there.

“I think I’m of a generation of scholars who in many cases were drawn to studying someplace very different from the place they came from,” he says, adding that his parents are British—both Shakespeare scholars who held positions at universities near Santa Cruz, California, where Warren was born and grew up.

“I grew up going to a lot of Shakespeare plays and while that was certainly enriching, I came out of it interested in studying a part of the world other than England,” Warren says. “Surrounded by university life, it wasn’t a stretch to imagine going into an academic career.”

After studying Spanish in junior high and high school, Warren attended UC Davis where he majored in anthropology and Spanish and minored in history.

“Far and away the best teachers I had in anthropology and history courses were faculty who did research in Latin America,” he recalls. Warren would spend a year studying abroad in Granada, Spain, before one of his professors from UC Davis, an historian of Peru and the Andes named Charles Walker, took Warren along as a research assistant to Cuzco, the old Inca capital 11,000 feet above sea level that later became a Spanish colonial city.

“Through that, I realized I wanted a career where I would get to travel, speak Spanish, and explore ideas,” Warren says. His next stop was UC San Diego for graduate school, where he received what he calls “a crash course in how historians do work.” After a first-year graduate seminar included a raft of readings on the history of medicine, Warren knew he’d found a topic he wanted to pursue further.

“I’d never read work on that before and really enjoyed it,” he recalls. “As I did my dissertation research, it was clear that that was what I was interested in.”

His dissertation became his first book, Medicine and Politics in Colonial Peru: Population Growth and the Bourbon Reforms, which examined the introduction of medical reforms as an instrument of colonial power designed to increase population size and labor productivity in eighteenth and nineteenth-century Peru. In it, he demonstrated how, by appropriating and critiquing the political rhetoric of the Spanish Crown, local doctors and officials in Lima developed a medical reform movement they could consciously claim as their own, while still engaging the broader goals of the state as it sought to reverse a perceived “population crisis” in the Spanish Empire.

“Part of what my work shows is that there was a tension between religious and non-religious explanations of health and disease in the 18th and early 19th centuries, even while much of the way that illness and healing were imagined [at this time] was through a religious lens,” Warren says, noting that, if you were to enter into a hospital in Lima in the 18th century, you’d see members of the church involved in the administration of care.

Warren says that while the history of medicine can be written as a history of institutions or of doctors, “more contemporary forms of research contend with beliefs, politics, and ideas about health, which demonstrate how diseases are constructed in society.”

Looking ahead, he hopes for more scholarship that examines “the way larger cultural beliefs and practices shape behavior around health and wellness.” In speaking about his research on the history of racial science and medical experimentation, Warren invokes indigenous scholar Eve Tuck’s framing that it’s important for research to “move beyond what is considered a damage narrative about one group inflicting harm on another and begin thinking about the ways in which indigenous people pushed back, undermined these efforts, showed their own resilience and imagined their futures.”

“With the work on racial science, one of the things that has interested me is thinking through how historians write about what we now see as the unethical work of scientists and other historical actors in the past,” Warren says, admitting that how one writes about the history of scientific research involving indigenous peoples is always a “very complicated endeavor” that constantly begs the question of “How do you historicize the kind of thinking that went into that work?”

“I’m in the position of being a scholar who writes histories of people and communities that are different from my own, so for me it’s important to think through the responsibility of doing that sort of work in an ethical sense,” he says. “When I went into graduate school I didn’t think about that in the way I do now.” 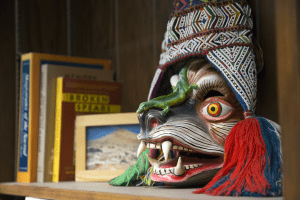 Since joining the UW, Warren has taught everything from a seminar on Aztec history and historiography to a course on the larger global health movement worldwide. He recently concluded a “micro” seminar at the Simpson Center on the history of the human sciences and the question of ethics, which allowed him to connect with students in Health Sciences.

He says what he loves most about the UW is that he feels he is given broad parameters to teach what interests him—and what often appeals to undergraduates as well.

“I get to teach on a wide range of topics that are of great interest to me and I get to teach smart, engaged students who are often keenly interested in those topics as well.”