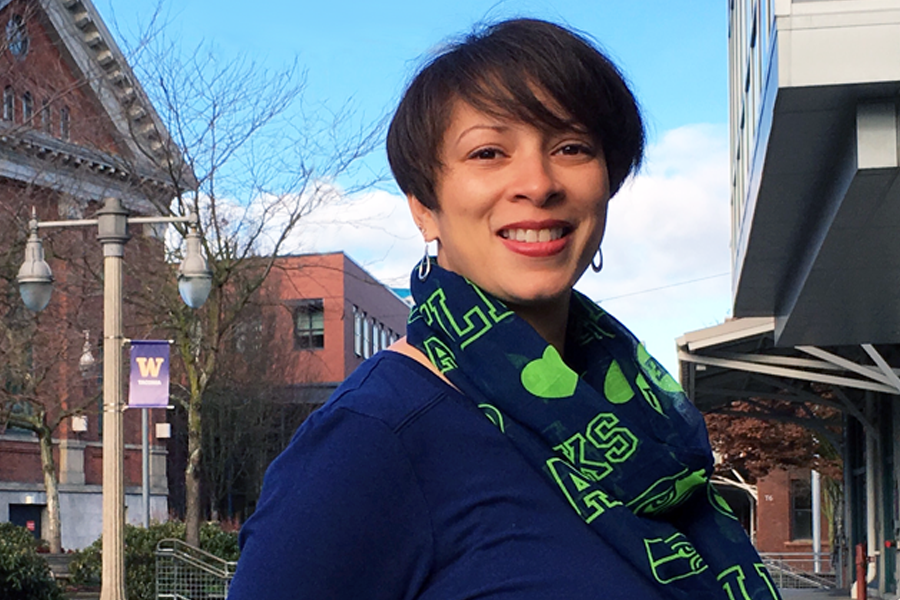 As assistant director of UW Tacoma’s Institute for Global Engagement and the Global Honors Program, she says she often thinks of herself as a “GPS for students in higher education,” helping students—many of whom are first-generation college-goers like herself—find success on their own terms.

But there’s one title Hermanson never imagined she’d one day wear: self-starting soap-maker. She was first inspired to learn how to make soap four years ago after purchasing some handmade soap at a farmer’s market. 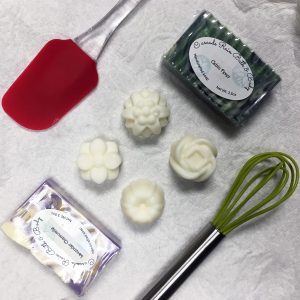 Determined to see if she could whip up some on her own as a gift for family and friends, Hermanson acquired some key ingredients—oil, water, lye, and scented oils—and set to work.

“If I’m inspired by something, I can figure out how to do it,” Hermanson says. “I just fully fixed in on that.”

It started as an experiment—something less than a hobby—but after several years honing her craft, Hermanson admits soap making has become as much and more.

Now, she sees it as a way to relax and tap into a creative side she never knew she had.

“I’m not an artsy person, but it feels like art to me,” Hermanson says. “It’s my escape sometimes: ‘Hey, I need an hour to create something.’”

She calls her creations “consumable art.” As is the case for most soap-buyers, one of the most enjoyable elements of the soap making process as creator, Hermanson says, is olfactory.

“I always smell with my eyes closed, because then I start thinking about what design I can see in my head with a particular scent: what colors do I think match this scent?”

A year after distributing the soaps that resulted of her first forays into the craft as gifts during the holidays, she found herself selling more bars on the side: first from her driveway ‘open-houses’ and, later on, at multiple craft fairs.

“It was successful, so soon after that I opened an Etsy site.” 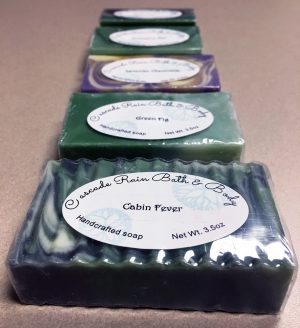 Soap making can be “exhilarating because you can envision what design you’ve poured out, but you never know what you’re going to get until you slice it,” Hermanson says.

To make her soaps, Hermanson uses a cold process. After mixing her basic ingredients with her chosen colors and scented oils, she pours everything into a mold. Even the height from which you pour the “batter” can affect the design of the soap, she says.

After letting the mold sit for several days, Hermanson then slices each bar, another one of her favorite steps because it’s at that point in the process that the soap’s unique color and design becomes clear.

After they’ve been cut, the soaps settle for another four weeks to “cure” before they are ready to be packaged and sold.

“It’s exhilarating because you can envision what design you’ve poured out, but you never know what you’re going to get until you slice it,” she says.

As in education, ultimate outcomes can be difficult to predict, but as long as the outcome is a positive one, count Hermanson happy.

A calling to connect

When Hermanson first joined UW Tacoma in 2012 as the graduate advisor, recruiter, and academic specialist for the Social Work and Criminal Justice Program, it was a logical next step on a career path she had set out upon years before.

“My passion is student success and their experience in higher education,” Hermanson says.

Growing up in Seattle, Hermanson attended Franklin High School. Her father worked for Seattle City Light; her mother, for Boeing. It was a different era—one in which long-term job prospects were stable and a college degree wasn’t a necessity.

“They were supportive of whatever I wanted to do, but back then, you didn’t have to have a college degree, so I had to learn about applying for college on my own,” Hermanson recalls. She knew she wanted to go to college, but wasn’t entirely sure what to do once she got there.

After two quarters at South Seattle Community College, she decided to pause and formulate a better idea of what she might want to do with her life. After two years in the workforce, she returned to complete her Associate of Arts degree before transferring to Washington State University (WSU). While serving as a mentor for fellow transfer students, she first discovered a passion for helping others find their own way.

“I loved helping my peers because, a year before, I was in their same shoes and that resonated with me,” Hermanson says. “The theme that I recognized when I was trying to figure out what to do next was I always enjoyed helping others overcome that fear or lack of knowledge.”

Hermanson says the knowledge it takes to navigate college can’t be learned unless you go through it yourself or have people who have been through it who can serve as a guide and resource.

Two years after graduating with her bachelor’s, Hermanson returned to WSU for a Master of Education in Higher Education and Student Affairs, during which time she also served as a graduate assistant in the Office of Student Financial Aid. On completing her degree, she was hired as an advisor for WSU’s Global Campus working in Western Washington.

“Most of that job was helping working adults fit fragmented pieces of an education together so they could earn a bachelor’s degree,” she says, adding that most of the students had stopped and started school multiple times before finding a reputable online program that would help them achieve their goals.

A Seahawks-themed iteration of handmade soap.

Hermanson’s own route through college might be classed as “non-traditional,” but today, such “non-traditional” paths are more common than ever. Desirous of a position that would allow her to work on campus as part of a team after years of working remotely for WSU throughout Western Washington, Hermanson caught on at UW Tacoma with the Social Work and Criminal Justice Program.

“The values and principles social workers abide by just resonate with me personally—they care about people and care about helping people—that’s at the core of what I do in higher education,” she says. “It was neat to be part of a program being a resource for people who wanted to go on and help others.”

Even while working behind the scenes, Hermanson says it’s still incredibly rewarding to know that she has had an impact on peoples’ lives. When she left that position to join the Global Honors Program this past July, she filled a box with small gifts and mementos she’d received from students as “thanks for being there.”

The Global Honors Program functions as a university in miniature—an interdisciplinary program serving high achieving, highly motivated students who want to “take an extra step” and stretch themselves beyond the basic requirements for a bachelors degree. Students from all majors and academic backgrounds work in close collaboration over the length of the two-year program, whose curriculum includes a culminating capstone project, as well as, student engagement opportunities that feature site visits to businesses and research centers throughout the South Puget Sound region and networking events with local community leaders.

“To see the interdependencies between our communities and the rest of the world is really what it’s all about,” Hermanson says. “We really emphasize critical thinking, collaboration, leadership, and strive to bring our classrooms to the world and vice versa.”

For her part, Hermanson says she’s spent most of the past quarter learning the new role and responsibilities, but has focused on getting to know the Program’s 80+ students, their goals, and perspectives on their educational experience. 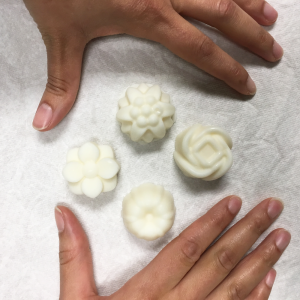 During the final year of the program, students present their solution-oriented capstone project at the Global Engagement Conference at the end of spring quarter. Oftentimes projects are in response to questions posed by community partners.

Hermanson says she believes the program is “a springboard” for students from college into life, while a developing a deeper understanding of their place in the world.

“If I could wave a wand, it would be that after graduating from high school, kids are allowed to take a year or two to explore the world and themselves to really figure out what their interests are and what makes them happy,” she says.

“It would be fascinating to see what would happen if we allowed more time to learn about ourselves as individuals and not what other people believe we should be.”

Sometimes that process uncovers the most surprising success stories.