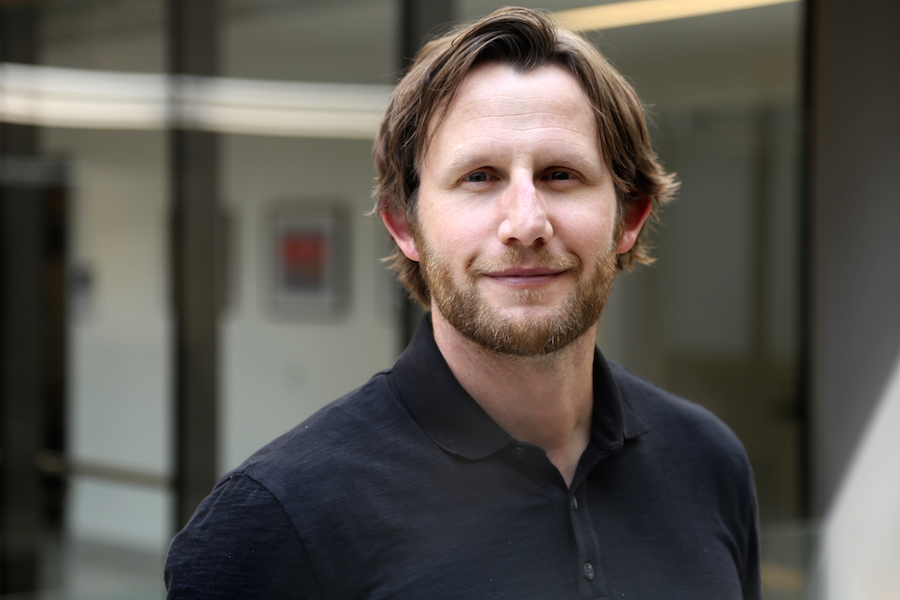 As University Ombud, Chuck Sloane does a lot of listening. One thing he hears most often is, “What’s an Ombud?”

The term, he explains, finds its origins in early 19th century Sweden, where growth of the government put it at an increasing distance from local concerns. In an effort to preserve its connections to individuals, the state created the role of Ombudsman, defined as the people’s advocate.

Universities began adopting the office in the middle of the 20th century. The UW was just the sixth university in the country to create an Ombud’s office—doing so in 1968 in response to a raft of social changes on campus.

“We’re probably responsive to 100,000 people, so the challenge with a small team is to try to make sure people are aware of us and that we’re creating accessibility,” he says. The Ombud office devotes “about a quarter” of its time to outreach and relationship building across the UW, Sloane says, but otherwise allocates energies to conferences conducted both on a one-to-one basis and in group mediation sessions.

“We don’t do investigations. We don’t tell the university what to do. I don’t make any formal decisions about the University,” Sloane says. “What we do is sit down with folks and help them navigate really challenging situations in their work life or student life—anything they have going on: challenges with colleagues, challenges with supervisors, challenges with people they’re trying to supervise.”

“We provide a space for people to sit down and get really clear on what their situation is, what their goals are, and what they’d like to see moving forward,” Sloane says. “In coming to us, you have to essentially explain your situation to a stranger. That first steps means that you are forced to think of it anew.” 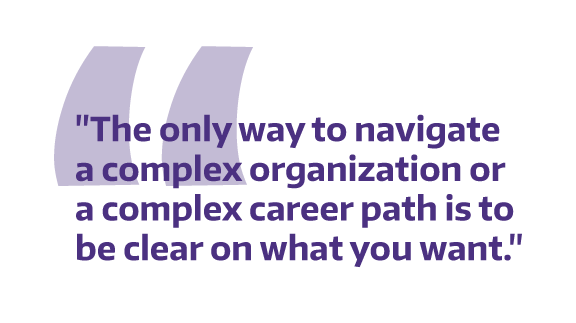 Over the course of each 90-minute meeting, Sloane helps clients devise options or next-steps to consider—ensuring they stay focused on a future in which they’re taking active steps to resolve an issue rather than just dwelling on a problem from the past.

“It’s not the Ombuds’ job to fix situations, but we do everything we can to support people as they’re moving through these spaces in their life and their career,” he says, terming the Ombud’s role as that of a “thought partner.”

“We are not advocates and are not intended to be aligned with the client, but we are fully attuned to them and we’re trying to assist and empower them,” Sloane says. “We have time to go through, get the whole story and not draw any assumptions.”

Once Sloane helps a client develop a list of things they’d like to see happen regarding an issue or situation, the next step is to determine specific goals and means of reaching them. Meeting with the Ombud, Sloane says, serves as a way for individuals to realign their outlook around a complex problem they might be facing and address it with a sense of completeness and clarity.

Sloane cautions solutions are not always possible, but coming to that point of realization is sometimes a solution unto itself.

“If it is possible, let’s figure out who you need to win over? What funding do you need? What opportunities do you need to make this happen? Let’s talk about how you find mentorship and new opportunities within and outside the University? How do you create a work and life that’s challenging and rewarding?”

When neglected, problems at work can become “emotional quicksand,” Sloane says. To avoid the pitfalls of problems left unaddressed, he and clients work together to answer the question: “What is the fear here?”

“As adults, we can get afraid of things and then we don’t want to think about them,” Sloane says, drawing a comparison to fears children have of not wanting to look at what might lurk in their darkened closets. “The fear may be appropriate at a certain level, but we also need to figure out a path through.”

That can mean connecting individuals to other University services as well. For Sloane, the role of Ombud is so interesting because it gives him the chance to “go deep.” 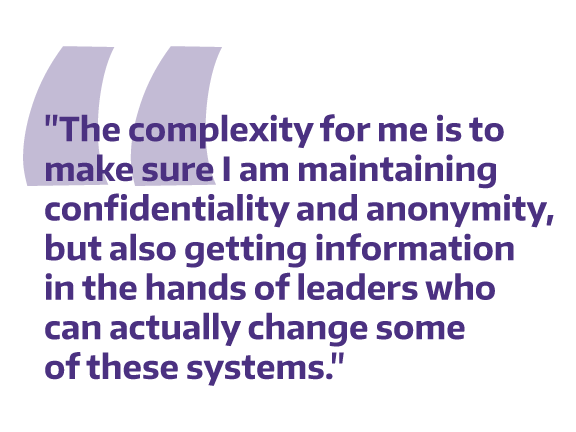 “We go there—wherever that is—and we’ll ask the questions that friends or family or coworkers might not feel comfortable asking sometimes,” he says. “We want to go there and help figure out the whole situation.”

Beyond working with individuals, the Ombud also serves a systemic purpose. Staying attuned to trends and themes he observes University-wide, Sloane and the Ombud office can identify “systemic areas where the University can be improving.”

“I’m fortunate to have productive relationships where I can reach out to leaders across the University and bring them up to speed on challenges or concerns that I’m seeing in their area,” Sloane says.

“The complexity for me is to make sure I am maintaining confidentiality and anonymity, but also getting information in the hands of leaders who can actually change some of these systems.”

Reporting to President Ana Mari Cauce, the Ombud office is intended to be neutral and impartial.

“You’re hearing one perspective, but you also have to keep in mind there are multiple perspectives on a situation,” Sloane says. “You’re proactively moving folks forward in their situation but also not taking their word as Gospel. No one has the ultimate truth in a lot of these situations.”

What is universal, however, is the Ombud’s commitment to helping individuals “recalibrate around how you are taking care of yourself in the midst of a problem or a challenge to give yourself the best chance of success.”

Ultimately, the office of Ombud is only as effective as people are willing to use it.

“We’re entirely reliant on people being willing to invest their time and energy in looking at a situation in a new way and trying to come up with a solution,” Sloane says. “One of the great things about this job is we get to focus on solutions. We get to hear the story and then we get to pivot to, ‘Okay, what now? What next? How do we help bring a person to a place where they’re going to be happy in six months or six years.’”

Growing up in Seattle, a career in mediation wasn’t immediately on his radar. He attended O’Dae High School in Capital Hill before enrolling as an undergraduate at the UW. After graduating, he moved to Baton Rouge, Louisiana to participate in Americorps, working with the National Alliance for the Mentally Ill. Part of the work involved brokering peaceful solutions to problems of violent conflict between police and mentally ill citizens throughout the state.

“Sheriffs offices were trying to figure out how to respond better and deescalate these situations,” Sloane says. “It was really interesting because I got to drive all around Louisiana and meet with sheriffs and sheriffs deputies and work with the mental health community—all really interesting folks.” 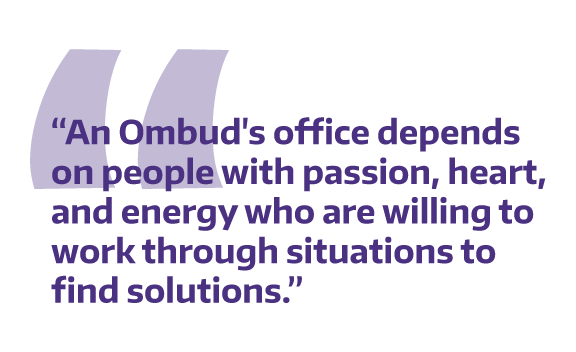 “I began thinking, maybe I don’t need my doctorate to pursue clinical psych—maybe I could do what I like to do through mediation—so I was able to talk myself into a job in Portland doing mediation for the Multnomah County executive.”

From Oregon, Sloane would move to Washington, eventually serving as a Deputy Ombudsman for King County. Five years ago, he joined the UW and found his perspective on mediation and conflict resolution newly refreshed.

“The coolest thing about working for the University is that people are so passionate about this place,” he says. “It’s true of researchers, faculty, students, and of staff—working at the UW is a point of pride and the work done he is often one of the biggest things in peoples’ lives. An Ombud’s office depends on people with passion, heart, and energy who are willing to work through situations to find solutions.”

Sloane considers himself an optimist with a “somewhat bizarre—what some might call freakish” memory for peoples’ situations.

“I’ve always been very curious about what makes people tick,” he says. “It’s a huge blessing to be able to have people come in and ask for some support—to ask for a different perspective—and to be vulnerable, thoughtful, and passionate enough to take that time to sit down and consider their situation and how they could productively work to improve it.”

Join Chuck Sloane and a panel of other UW experts on September 17 from 12:00 – 12:50 PM in the HUB room 214 for advice, tips and techniques on managing workplace stress.

Panel members will each provide a 10-minute presentation on their unique approach to stress management followed by an open discussion and audience Q&A. Learn more and register.