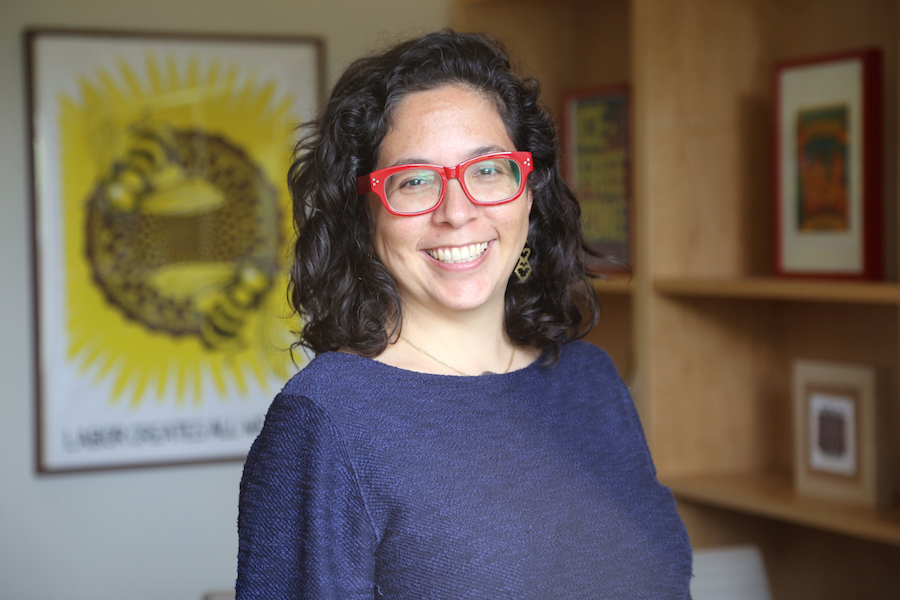 For Angélica Cházaro, great tumult comes with even greater opportunity. An assistant professor at the University of Washington School of Law, Cházaro specializes in immigration and refugee law. Over the past two years, her expertise has been called on more than ever as US immigration policy dominates the national political conversation.

“Teaching immigration law has been challenging in these times because the ground is shifting so quickly and so much,” Cházaro says, referencing recent actions by the federal government to enforce immigration law along U.S. borders. “Even though the immigration code hasn’t changed, the way that people are experiencing immigration enforcement is changing all the time.”

With immigrant communities facing increasing challenges, Cházaro says her work as an educator and advocate can feel at once exhilarating and exhausting.

“It’s exhilarating because of the opportunities it is opening up for people to question the way the U.S. does immigration enforcement in a way they haven’t before,” she says. It’s exhausting, she adds, because she must balance her teaching and legal advocacy work with an ever-evolving cycle of news updates about immigration policy.

“I’m always reading the news with an eye towards how I can digest this for the broader public, for the advocacy organizations I support, and for students to help them understand what it is to practice law in this moment,” Cházaro says. “The reason I came to teach law is that I care about having students who are going to become lawyers who are engaged with these really pressing issues.”

In the first weeks after the presidential inauguration in 2017, the UW School of Law held a town hall on presidential power where Cházaro spoke on immigration. Then, last November, after UW student Bangally Fatty was detained at the Northwest Detention Center, Cházaro and Jackson School professor Angelina Godoy organized a teach-in, chartering a bus to help bring more than 200 students to the detention center in Tacoma. Faculty joined from across the University to share knowledge and perspective from their respective areas of expertise.

“There is so much knowledge here at the University and I think me and a lot of my fellow faculty members want to share it with both students and with the broader community,” Cházaro says of the November 29 event.

“For a lot of people in Washington state and Seattle particularly, we’re used to thinking of ourselves as this progressive bastion,” Cházaro says. “Discovering we have one of the largest immigrant detention centers on the West coast 45 minutes south of campus is a huge revelation for many who begin to understand the interaction between federal immigration enforcement and state enforcement.”

Cházaro says one of the best things about legal education at the UW is that students have the chance “to do a lot of experiential learning.” She cites how Bangally Fatty’s case was, at the same time as the teach-in, taken up by the UW Immigration Law Clinic, composed of students from Cházaro’s class on immigration law who represented their detained fellow student at a bond hearing. (Fatty was later denied bond.)

“I see folks realizing that you cannot just understand these systems, but have a way to impact them—that they are decipherable and moveable,” Cházaro says.

Cházaro’s understanding of immigration law dates to her early childhood. After emigrating to the U.S. with her parents from Mexico City at the age of four, she spent most of her childhood living on both sides of the US-Mexico border. The issue of the border and immigration enforcement remained “a daily part” of her childhood experience—Cházaro recalls how, for three years, she lived on the Mexico side of the border, crossing everyday with tourist visas to go to school on the U.S. side.

“For second, third, and fourth grade, my daily experience was waking up three hours before school to drive to the border, sit there in line for hours sometimes, have a border patrol officer look at my documents and those of the kids my mom would drive to school and then do the whole thing in reverse on the way back,” she says. “Growing up, I always knew where my passport was.”

When she was 16, she moved back to Mexico, but returned to the U.S. two years later to attend college as an international student at Harvard, where she majored in Women’s Studies and wrote her senior thesis on the depiction of the experience of immigrant refugee women in fiction.

Her first job after graduating was as a case manager at a domestic violence shelter in New York City, running support groups for immigrant women who were victims of domestic violence while simultaneously supporting their quest to get legal status. The lawyers on the project encouraged her to go to law school to further her effectiveness as an advocate on their behalf.

In her third-year as a law student at Columbia, she heard about the Northwest Immigrant Rights Project.

“Everyone I was speaking to was telling me, if you want to learn immigration law, go work for the NWIRP,” she says. So she did—serving as an attorney providing direct legal services to low-income immigrants applying for benefits under the Immigration and Nationality Act from 2006 to 2013, when she joined the UW faculty as a visiting assistant professor.

“The visiting assistant professorship allowed me the luxury and the space to teach a reduced load so I could develop my academic writing and go on to the academic job market,” she says. The move to legal academia also freed her to do more advocacy and policy analysis support for grassroots organizations working to address crises on the ground. After three years as a visiting assistant professor, she landed a tenure-track position at UW.

While Cházaro says it’s satisfying to be able to help people and support movements to reduce immigrant vulnerability, she adds it can also be difficult for the very same reasons.

“It feels great to be able to assist people, because I see myself in their stories and struggles, but it’s also devastating to see the ways in which undocumented people continue to be criminalized and attacked. The experience of being an undocumented immigrant is living with the fear of deportation.”

What troubles Cházaro most about the most recent wave of deportations is not just the numbers of people deported, but also the ways in which ICE agents’ targeting efforts “affect the life of everyone who could face deportation.”

“It’s a privilege to be able to teach immigration law here as an immigrant myself because I think I’m able to bring a perspective to the teaching of that subject that I otherwise wouldn’t have,” she says.

What can people do to support the rights of undocumented immigrants?

“A lot of people right now are tempted to head straight for the border,” Cházaro says. “And while there is a definite need for support if you have language skills, legal training, or can offer expert affidavits for asylum cases, I would encourage our faculty and staff to look internally—into our own backyard—and ask what are ways we can think of to support and facilitate the safety and success of UW faculty, staff, or students who might not have secure immigration status?”

“They are the ones who are interacting daily with the students who are living with the trauma of knowing they are deportable,” she says. In addition to being a reactive resource to help bring clarity to what is happening on issues of immigration, Cházaro hopes she can work to engender new ways of thinking around U.S. immigrant enforcement policy.

“Broader change may not feel politically viable right now, but because of all of the pushback to Trump’s policies, there is an opening,” she says. “I wish people knew that nothing about how we organize immigration enforcement is inevitable—these are all policy choices that are being made every day and just as they’re being made, they can be unmade.”

“These are structures that we can both study and impact. I want my students to always know and remember that as they move through the world.”

Angélica Cházaro holds a M.A. in Women’s Studies from Harvard College and a J.D. from Columbia University School of Law.

What are you actually advocating for? Open borders? Not enforcing the law? I’m confused. While I sympathize with the plight of illegal aliens, dont they have some responsibility themselves?