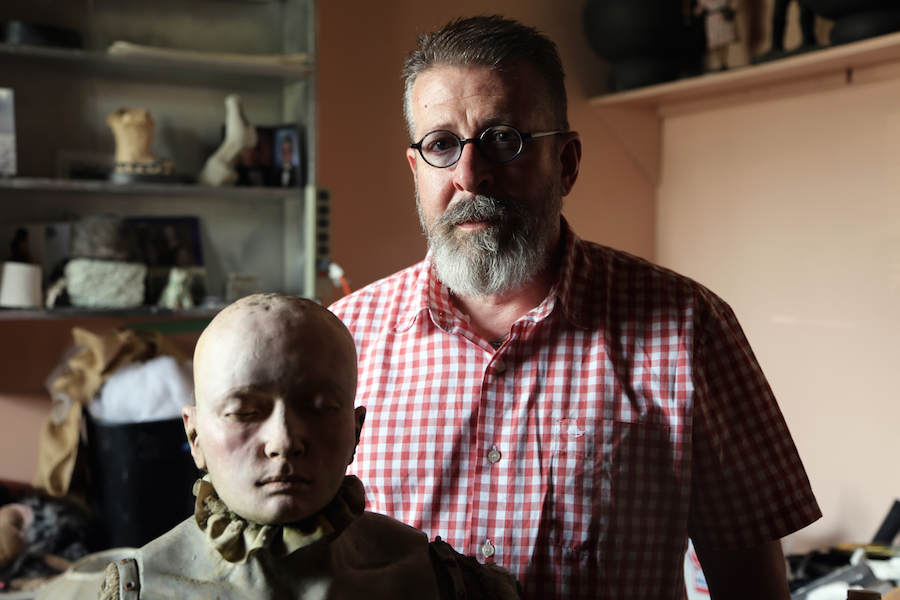 Doug Jeck teaches students to think on their feet—by asking them to painstakingly create life-size human forms that can stand on theirs.

The associate professor of 3D4M: ceramics + glass + sculpture meets me in the Ceramics Building right before his ART 353: Intermediate Ceramic Art final. Arrayed about one of the building’s studios spaces are 14 clay creations—some perched on chairs, others standing alone—as well as several students putting eleventh-hour touches on pieces several months in the making.

“It’s a really, really challenging class,” Jeck says. “What’s difficult is, from the first day of class until now, they’ve had one thing to do and that is to get something that’s more or less life-size to make it through a kiln firing and get it to stand up. Outside of sport, it’s a process of sustained labor and vision you don’t see much of these days.”

A nationally renowned sculptor of clay and the human form whose work bridges ceramics, photography, and performance art, Jeck is best known for his figurative sculpture, but eschews use of the term in favor of “human object.”

‘Figurative’ implies the removal of that which is directly human into a symbolic representation,” Jeck says in his artist’s statement. “‘Human Object’ not only describes the uncanny presence of the thing I make, but also refers to the focus of its content.”

That “content” could mean any number of thoughts and encounters Jeck has as he attends to a given piece, slowly building a hollow human body and day by day adding thin strips of clay on top of another inches at a time until features begin to emerge. He encourages students to think of their sculpture space as the reverse of an archaeological site: instead of stripping away layers, they are accumulating those thoughts and experiences around the work at hand until the end-result is greater than the sum of its parts.

“It’s your narrative that gets embedded in the thing just by osmosis. At the end, all they can do is look at these things in an exercise of gestalt—aesthetic arrest,” he says, referencing a way of seeing in which one can’t dismiss something as quickly as you would viewing it analytically or through the lens of the “pornographic,” a term Jeck uses to denote a way of viewing based on consumption, understanding, and rapid disposal. “All you can do is stand before it and behold it.” 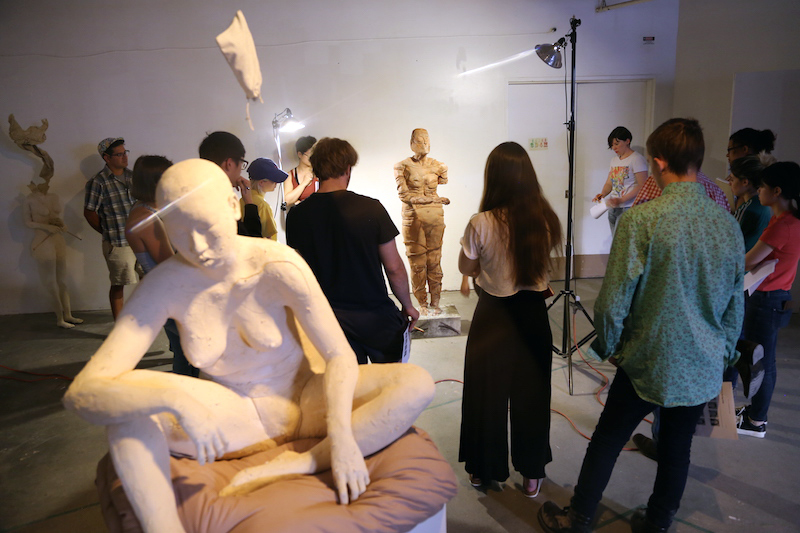 To the extent that Jeck’s and his students’ ceramic sculptures are a reflection of their accumulated selves as opposed to individual “people” with projectable personas, there will also be cracks and catastrophes along the way. But that too is part of the process.

“That’s not something that is broken or incomplete because it is missing things,” Jeck says. “It can be something fragmented that asks the future to complete itself.”

Jeck cites a fragment of a statue of Apollo he saw recently on his first trip to Italy. Pried loose from a long-forgotten temple, the fractured effigy was liberated from its original context and free to embody whatever new form he wished. Seeing those “archaic fragments” first-hand served as a culminating experience in his three decade-long journey as an artist—one he never intended to embark upon in the first place.

“Clay is my instrument.”

Jeck went to college to be a trumpet major.

“I had talent,” he recalls, “but was a technician, not a musician.”

After studying it for two years at Tennessee Tech, one day, he visited the university’s Appalachian Center for Craft, where he spied a trumpet in the office of ceramics teacher Tom Rippon. They got talking and Jeck learned Rippon was trying to learn to play. Rippon convinced Jeck to help teach him and Jeck, in turn, decided to try his hand at ceramics.

“I’m a spiritual man and I think there was just something that moved me into making stuff out of clay,” he says.

He would go on to earn his BFA from the Appalachian Center for Craft (he recalls the “unspeakable” size of his studio space as a walk-in undergraduate) before obtaining his MFA from The School of the Art Institute of Chicago.

Jeck says Chicago was a challenging change of pace for one with little to no grounding in art history, but he relied on his Rippon’s mentoring words to spur him forward.

“Start making your art,” he recalls being told. “I just had to be in the studio and drive it and extract my own kind of meaning.”

Five years after obtaining his MFA in Chicago, Jeck left to teach ceramic sculpture at the New York State College of Ceramics at Alfred University. Then, in 1996, he accepted a teaching position at the University of Washington, home to what he calls “a storied ceramics department.”

“We’re not an orthodox clay program here and are sort of known for that.” 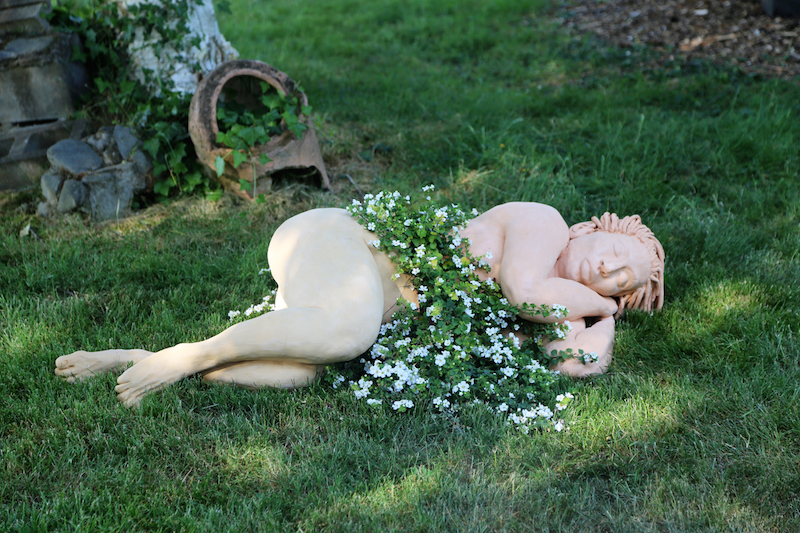 Ask Jeck about his philosophy as an artist and instructor and he’ll reach back past his formal arts education experiences and that initial encounter with Rippon. Growing up in south Florida, he recalls how he, his brother, and father would play with clay for fun.

“We used to stay up for hours and make these little clay guys and have wars with corkscrews and cocktail swords and garlic presses,” he says. “It was a really formative thing if you think about it.”

Years later, when Jeck was considering pursuing a career as an artist, his father, “a gifted teacher,” asked him what he thought an artist did.

“He said, ‘Do you know what an artist really does?’ And I gave him an answer like, ‘design things.’ And he said, ‘An artist has his or her eye, finger, and soul wired into society and his job is to either instinctually or conceptually comment on the state of affairs of being human.'”

The words stuck. Jeck echoes them when speaking about the role of ceramics—and art writ large—in education today.

“At the high level of academia, ceramics still matters, because it’s an aspect of being human; it’s not only the production of things here, but also the way it helps students register something about their behavior.”

One of the first things Jeck does when teaching Introduction to Ceramics courses is have students tape down their thumbs, dip their hands in wet clay, wait for it to dry, and then attempt to make something. Jeck says it allows them to work in an “archaic way” and “to fathom what it is to create things in real space which don’t exist prior to your making them.”

It’s that process of creating something of tangible substance from nothing that, for Jeck, undergirds higher education as a whole.

“An undergraduate education is not just an acquisition of a quiver of skill sets,” he says. “The University is a place where thought has its foundation; where the blocks are laid for someone’s being and character and way they fill out their world in thinking. With art education, if that person’s foundation for the way they understand themselves has creative thinking at its core, those are good people to have around.”

For Jeck, that’s not a high-minded way of thinking—just pragmatic.

“That’s what makes the world good: having people who have a different idea about what it is to be in it. That’s the job I feel like I have here: to make sure there are people like that in the world.” 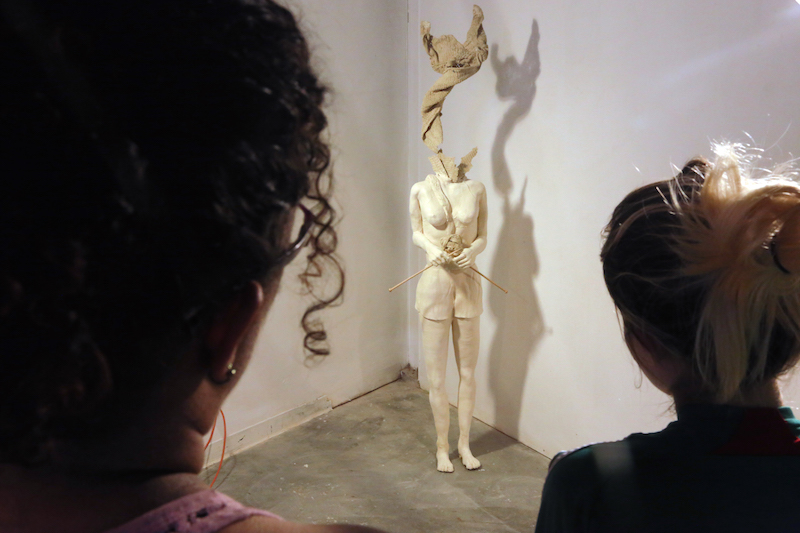 Doug Jeck holds a BFA from the Appalachian Center for Arts and Crafts and an MFA from The School of the Art Institute of Chicago. His work is in numerous private and public collections, including the Johnson Wax Collection, the Los Angeles County Museum, the Smithsonian’s Renwick Gallery, the Mint Museum, the Tacoma Art Museum, the Seattle Art Museum, and the Gardiner Museum of Art. He has upcoming shows at SOFA (Chicago, Nov. 1-4) and the Holter Museum in Helena, Montana.

Catch the 2018 MFA + MDes Thesis Exhibition at the Henry through June 24. The Henry Art Gallery is open 11 a.m. to 4 p.m. Wednesday, Friday, Saturday and Sunday. Admission is free to UW students, staff and faculty ($10 general, $6 for seniors; free to all on Sundays).