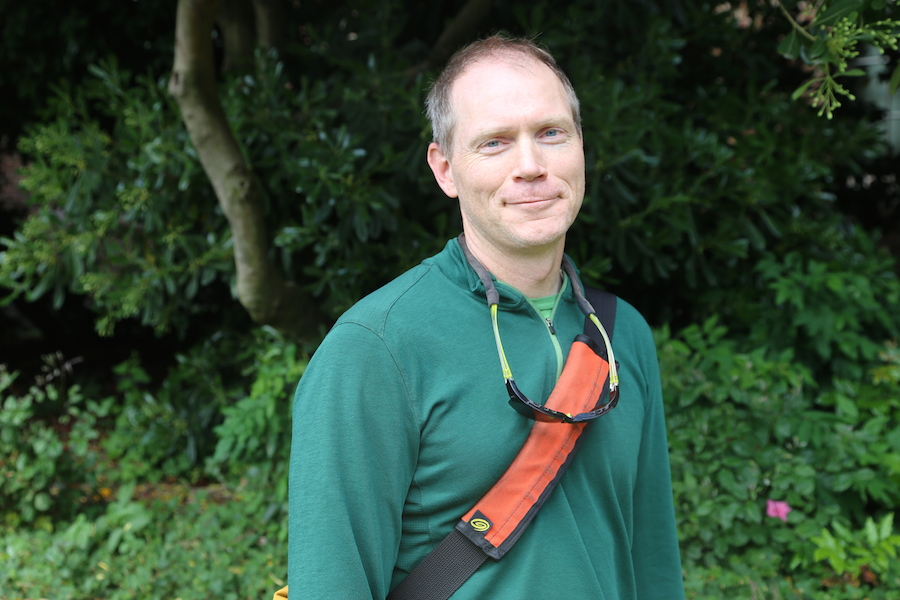 When Jim Gawel looks at a lake, he sees an opportunity to learn—not just for the students he instructs as an associate professor of environmental chemistry and engineering in UW Tacoma’s School of Interdisciplinary Arts & Sciences, but for entire populations who rely on and reside by those water bodies.

“Especially in urban areas, lakes are a valuable source of recreation, food, and everything else,” he says. “Spending time out on lakes, you recognize people need those things.”

This past April, UW Sustainability recognized Gawel for his work at UW Tacoma and throughout the region with a Husky Green Award, citing his deep engagement with the fields of limnology (study of lakes) and pollution and public policy as well as his presence as the “humble hand” behind a range of projects and initiatives, including serving as recent chair of the UW Tacoma Chancellor’s Advisory Committee on Sustainability, leading the tri-campus Cupanion project to reduce the waste from single-use water bottles on campus, as advisor for Project Earth, and as the “cohesive thread” holding the Giving Garden together as it transitions through student involvement.

When he first moved to Tacoma to take a faculty position in 1999, Gawel admits he was afraid he might not find enough to study, having previously worked on numerous Superfund sites as a graduate student throughout the Northeast. 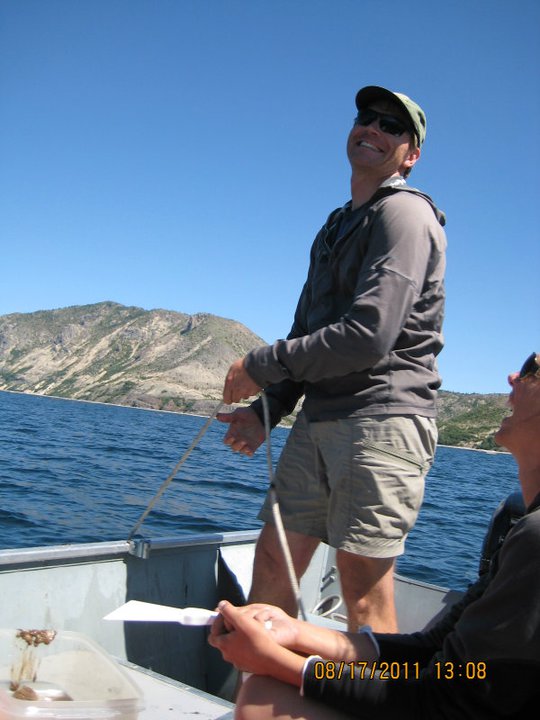 “When I got here, I was like, ‘this is the pristine Northwest! What am I going to study? Then, I learned very quickly that my own backyard in Tacoma was contaminated by a smelter that used to exist only a mile or two away,” he says. “Suddenly I was set.”

For Gawel, studying how lakes and other waterbodies function also means educating people who live in the vicinity in order to create a more equitable and accessible environment for how people approach and make use of the land.

“When a body of water gets contaminated, people will say, ‘oh, we won’t eat fish from there or we won’t swim there,’ but a lot of people don’t have that choice—that is their local place to go recreate,” Gawel says.

“I like doing applied research with purpose behind it: I want to figure out what’s gone wrong, how to fix it, how to improve a lake, so people can do more on it.”

Growing up in Kentucky, Gawel first became interested in scientific fieldwork as a Boy Scout when he helped a leader who was pursuing a Masters in Fish Studies count fish in a creek by wearing waders and a car battery that delivered a harmless electroshock to passing fish.

“That outdoor adventure science is what got me hooked, I think,” he says. That first experience is not dissimilar from what he does today on lake and streams. It’s that kind of work, he says, that gets students interested in science in the first place.

“Something that really gets students hands-on engaged is how you get them jazzed about doing science,” he says. “Then they understand how the work they’re doing in the lab connects to what’s going on in the real world.”

Before joining the UW Tacoma faculty, Gawel’s own real-world experience involved a stint in the Peace Corps as a water supply engineer in Kenya.

“Getting away from this country and getting embedded in a way that you learn the language and culture and you’re actual working with people as opposed to being a tourist spoils you for traveling any other way,” he says.

Returning to the US, Gawel attended grad school with the set intention of doing environmental work that involved fieldwork. He got his start as a graduate researcher working in Appalachian forests measuring metal impacts in trees related to acid rain. Every two weeks, he’d drive to the Adirondacks in upstate New York to get samples at ten mountains over the course of four days—all at 1,000 meters.

“I’d hit the trail head, go up, down, hit the next mountain, go up, down, then I’d come back, try and recoup for the next week and a half, then head out and do it again.”

In his studies at Superfund sites near Boston what he observed in trees wasn’t due to atmospheric deposition from rains, he recalls, but from groundwater transport. So he followed the tree roots down, leading to his interest in metals in aquatic systems (the pollution of those water bodies formed the basis for the 1998 legal drama A Civil Action starring John Travolta).

He next worked on lakes and ponds near Boston that had been dosed with arsenic as a means of killing off algae to enable cutting of “clean” ice. Soon after, he accepted a teaching job at UW Tacoma as it offered him “a rare chance” to help grow a program as a junior faculty member all while allowing ample opportunity to conduct research and teach.

“I very much believe in combining your research and teaching in the same space,” Gawel says. “Part of that is that students learn better if they’re doing something that is meaningful. In sciences, I can have them work on projects that collect data on lakes in the process of learning how lakes function. But then it turns out that nobody [besides those students] is collecting that data. It’s a valuable set of data because a lot of these lakes aren’t monitored and yet people want that information, but don’t have it.” 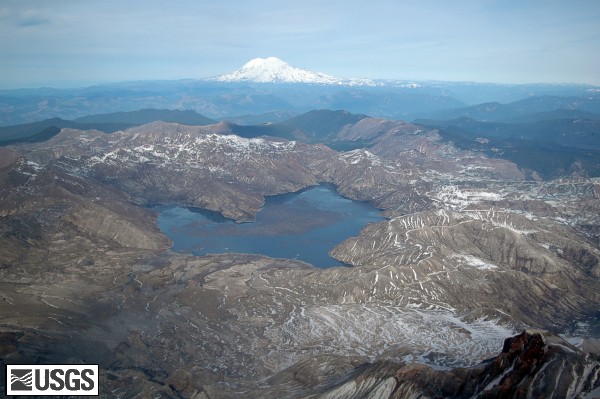 The 1980 eruption of Mt. St. Helens  tore thousands of trees from the surrounding hillsides and swept them into Spirit Lake, whose surface area increased from 1,300 acres to about 2,200 acres. Gawel studies increased productivity in new shallow areas of the lake that were created after the eruption.

Gawel views fieldwork as a great way to get students involved in something that simultaneously improves their learning and allows them to give back to the community by collecting information the community wants.

“By getting them to do real work and connected to a place that’s nearby, they then start to see that what they did is science. At that point, they care more about it,” he says.

Besides conducting fieldwork on lakes throughout the region—including at Spirit Lake at the base of Mt. St. Helens—Gawel says one of the most rewarding aspects of teaching at UW Tacoma for the past 19 years has been encountering former students at meetings in communities around the South Sound region.

“I’m working with my former students now in roles with natural resource agencies or consulting companies as professional collaborators on things,” he says.

“I’m a teacher first and I love seeing my students show off what they’ve done and knowing they’re taking pride in their work and are invested in this stuff.”

Gawel commends UW Tacoma’s “strong focus on community engagement and an urban-serving mission,” calling it, “a really good place to do this work because it feels valued.”

Beyond his duties as professor and researcher, Gawel also serves on the steering committee of the Puyallup Watershed Initiative’s environmental education community of interest and, for several years in a row, has organized a documentary film competition on the subject of the Puyallup watershed as a means of broadening awareness of the watershed as an entity, a resource and an asset worth protecting.

“Most of the things we’re worried about that are interesting to study now are not obvious unless you look for them,” he says of his work on pollution in lakes and watersheds. “People tend to have a perception that if it looks green, it’s fine.”

As part of his efforts to raise awareness around the state of the water bodies that sustain us, Gawel has produced two documentaries about “invisible” watershed problems. The first compared aspects of water quality and habitat-loss in Tokyo, Switzerland, and Boston; the second focused on the similar themes involving the Puyallup River watershed.

“I was trying to create something for the public,” Gawel says. “Public education and outreach is something I value very much.” Gawel prizes getting out into the communities that make use of lakes and water bodies in the Puget Sound region—efforts that include presentations to local agencies and talks to retirement communities and other associations.

“I do as much as I can to get the word out about what’s going on,” he says. “Then the public becomes the people who are actually teaching others.”

Jim Gawel holds a B.S. in Civil Engineering with Emphasis on Environmental Problems and Planning from Brown University and a Ph.D. in Environmental and Aquatic Chemistry, Civil and Environmental Engineering from the Massachusetts Institute of Technology. He is President of the Washington Lake Protection Association (WALPA), and has been working with WALPA to develop a state-wide volunteer lake monitoring program. In his spare time he teaches rock climbing for the Tacoma Mountaineers.