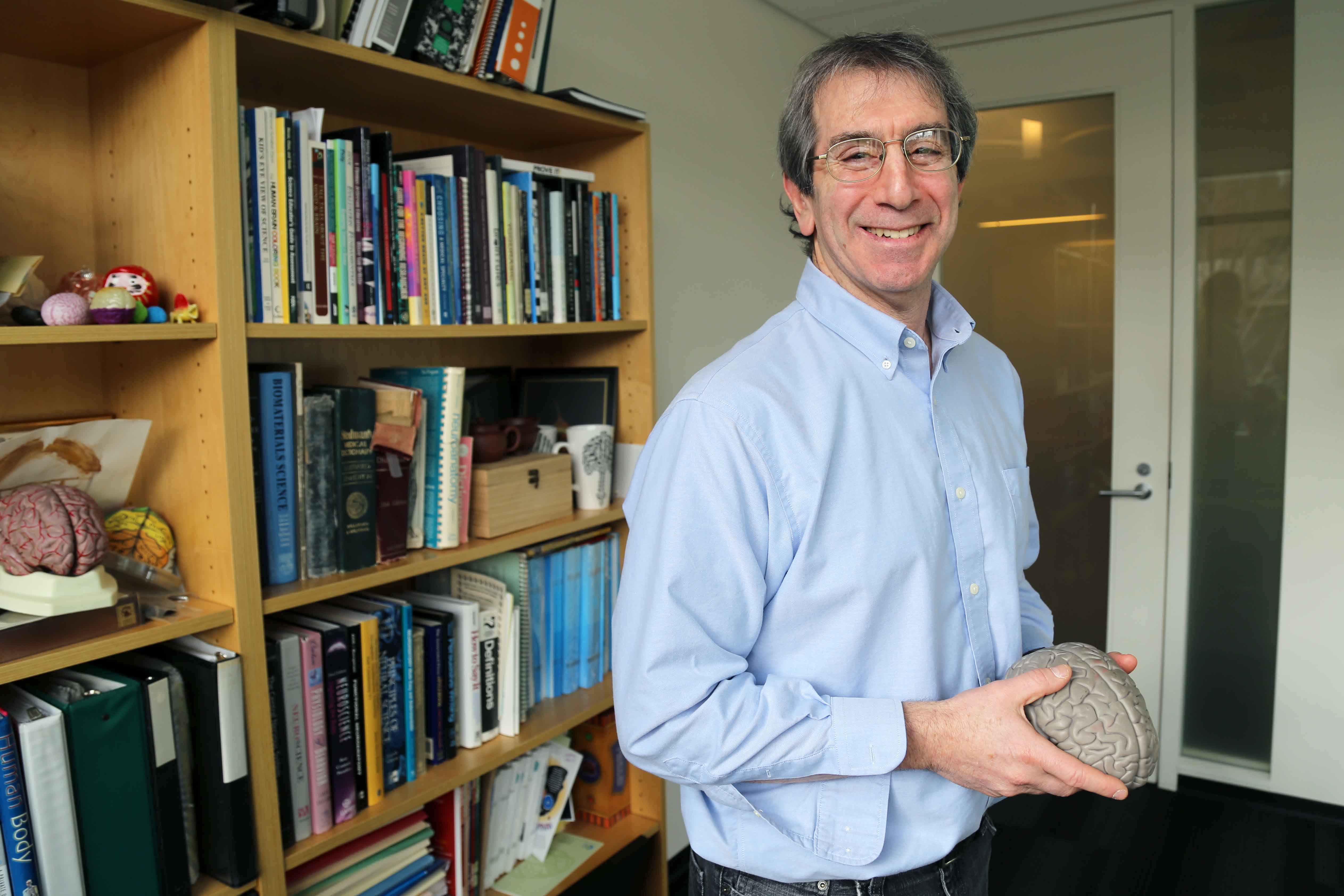 If Eric Chudler could design the perfect children’s television show, he would fuse three elements: dinosaurs, outer space, and the brain: “Those are three things almost every kid can get into.”

But budgets being what they are—and technology to clone dinosaurs or launch rockets into deep space lagging behind recent advances in the field of brain science—Chudler, an Emmy-winning educator who serves as executive director of the Center of Sensorimotor Neural Engineering (CSNE), is fine forgoing perfection in favor of a more proven formula. After all, if there’s one thing scientists and television producers share in common, it’s the knowledge that if a formula works, don’t change it.

Chudler found his formula as both producer and educator in 2008 when he conceived of BrainWorks, a children’s television show that explores the world of brain science. Combining quick cuts and cool facts, the show cuts no corners following a group of young people from research labs to playing fields as they learn about the brain via hands-on experiments, field trips, and interviews with brain experts.

“I couldn’t think of any TV shows that focused on the brain,” says Chudler, who at the time was two years into a research associate professorship in the UW Department of Bioengineering. “I saw television as another avenue I could use to try to educate the public and one more place where kids could find science.”

To date, Chudler has produced three full-length episodes of BrainWorks in partnership with UWTV. The series’ third and most recent episode on “Exercise and the Brain” won a Northwest Regional Emmy Award in 2017.

In the wake its success, Chudler is now fundraising to produce a fourth episode exploring the promises and challenges of Brain-Computer Interface (BCI) technology, which aims to build a connection between the nervous system and a machine to restore sensorimotor function. The goal is to reach $27,000 in funding by March 16, which will allow for production in time to air on TV and the web next summer.

Chudler envisions this episode taking place largely in labs and research space associated with the Center for Sensorimotor Neural Engineering.Over the course of twenty-two and a half minutes, the cast will participate in demonstrations of how brain activity is recorded, how electrical activity from the body can be used to control machines, and learn how neurosurgeons stimulate the brain. They’ll also engage in discussion of some of the ethical issues involved with Brain-Computer Interface technology.

“I’m opening up the front door to kids and letting them literally walk through this space and then the people watching can tag along,” Chudler says. But as much as each episode is a chance for students to step into the world of the brain, it’s also a chance for them to step onto the campus of a leading research university.

“It allows kids watching to see the University—and because there are kids the same age at the University [in the show], they can see themselves as University students in the future,” he says.

BrainWorks has filmed everywhere at the UW from research labs to sports facilities, intercutting sit-down discussions and demonstrations with physicians and researchers with trivia segments and informative footnotes that scuttle across the bottom of the screen.

“It will really expose kids—and anyone else—to things that are going on at the UW at the cutting edge of science,” Chudler says. “The other purpose of the program is to show that this type of work requires people with all different kinds of expertise: engineers, neuroscientists, computer programmers, and—if a technology is going to be implanted into the body—physicians.”

The need certainly is there: more than a billion people around the world suffer from neurological disorders and injuries, many with sensory and movement problems caused by neurodegenerative disorders such as stroke, spinal cord injury, or Parkinson’s disease.

“All of us know someone who has problems with their nervous system—Alzheimer’s, Parkinson’s, ALS, stroke, schizophrenia, depression, sleep disorders,” Chudler says. “We’re getting close to solutions to some of these neurological problems that are so prevalent in today’s society, yet there are still so many open questions.”

This preponderance of questions—and possibility of answers—is one of the reasons he believes in familiarizing students with the brain and the basics of neuroscience from a young age.

Conveying the burgeoning promise Brain-Computer Interface technology in a format that resonates with a wider public is also part of  Chudler’s broader sense of giving back to the community in his capacity as a public educator—something he says he first learned from his parents who served as teachers and school administrators in the Los Angeles city school system.

“They had always thought that education was important and watching them allowed me to see how important it was to give back,” Chudler says. “As University faculty, we’re part of a community, so I think it’s an obligation to give back.”

It’s something he witnessed firsthand in L.A., then at intervals around the globe. In the late 1960s, his father left the L.A. city school district and, working through the Office of Overseas Schools, obtained the headmaster post at the International School of Kuala Lumpur in Malaysia. The family tagged along.

“I went to Malaysia for fifth and sixth grade and Japan for eighth, ninth, and tenth grade,” Chudler says of his family’s time living along Asia’s Pacific Rim (his high school language was Japanese). When he returned to the U.S. to attend UCLA as an undergraduate to study Psychobiology, his father went on to live and teach Italy, India, Sri Lanka, Romania, and Chile.

“After I graduated high school, he always had it written into his contract that wherever he was, I would get to visit during break,” Chudler says. “So I’d spend my Christmastime in India or visiting Italy and Romania.”

Shortly before his father’s death seven years ago, Chudler collaborated with him on a series of interviews that came together in the form of a book: Educating Albert: Scenes of An Overseas School Administrator, a thoughtful and at times riotous autobiographical testament of his father’s more than two decades abroad.

“I’d write the story down over the phone and check the details with him later,” says Chudler, who has followed in his family’s globetrotting footsteps. Several times over the past decade, he’s traveled to the foothills of the Himalayas to participate in “Science for Monks,” a project initiated with the approval of the Dalai Lama in which neuroscience educators share their research into how the mind and brain works with Tibetan Buddhist monastics.

“They have an idea of how these things work and they’re trying to figure out how that aligns with Western science,” Chudler says, adding that delineated lines of philosophical difference do exist.

The interchanges impart a certain dimensionality to his own thinking as a scientist and educator as well.

“In Western science, we study other people and take a very reductionist approach, but maybe that’s not how you get to consciousness,” he says. “Maybe you need to study yourself.”

Help make the next BrainWorks episode a reality here!

I am looking for information on a Dr. Gasper, who I heard speak on NPR in regard to Alzeimers research and Ageing with Dignity. I am seeking more information.