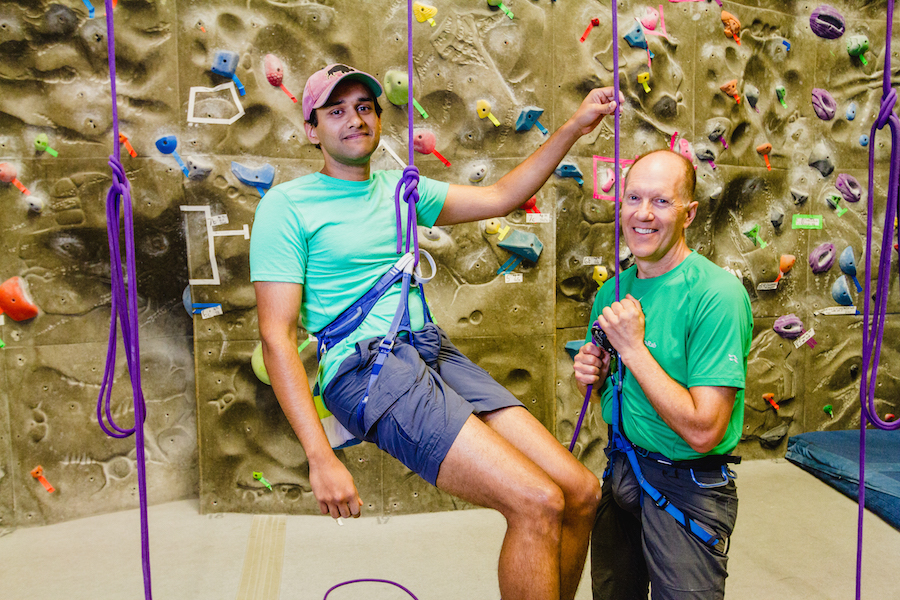 A little time, a little effort, and a dash of concentration. It’s a simple recipe for what might seem a complicated endeavor: climbing rock walls. But in the case of two new would-be rock climbers at The Crags, the University of Washington’s climbing center, another element would prove a key ingredient on their path to mastering the climb: friendship.

Were it not for a chance encounter at the climbing wall, Owen Lawrence and Sri Vardaraj might never have met. Lawrence, ’85, works as a researcher in the Department of Biological Structure studying neurodegenerative diseases, while Vardaraj occupies a separate space on the scientific spectrum, studying physics as a graduate student.

When both men walked into UW Recreation’s UWild Adventures Basic Climbing class, neither realized he would be meeting his future climbing partner and friend. Entirely new to the activity, they both recall sharing the “scary” feeling of embarking on their first climb.

“You don’t want to be hanging by a thin rope,” Vardaraj says. He adds that climbing at first felt like he was going against natural instincts. Lawrence agrees, but cautions there’s only one way to counter self-doubt.

“You have to give it a try and see what happens,” he says.

After their first class, the two started chatting and agreed to meet up the following week to climb. They did, and soon, a friendship blossomed.

“If I fall down, somebody has to catch me,” Lawrence says. “I think that’s what makes our relationship really great – we’re both sort of equally afraid of killing the other person.”

Having someone to learn with and lean on has pushed Owen and Sri to their limits—in a good way. Together, they say they hold each other accountable, relying on the other to show up when they agree to climb together. Once they gear up, their convivial collaboration involves sharing strategies and techniques for the climb and providing support on the ground when the other climber is on the wall. 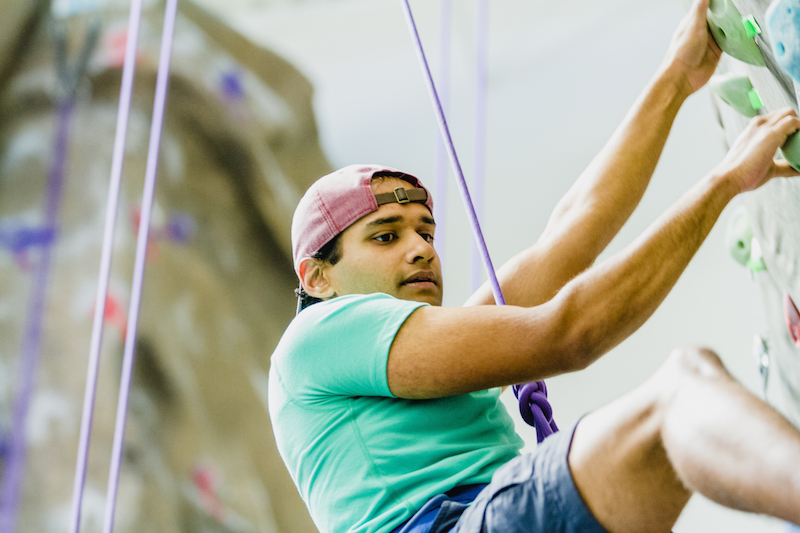 They agree that it’s this dual challenge of mental and physical exertion that keeps them coming back for more. Far from experiencing feelings of trepidation, Vardaraj now describes climbing as a “Zen state”—both a relaxing and challenging experience—and welcomes the opportunities to get out of his basement lab and into the Crags Climbing Center.

Lawrence, too, found climbing to be a new outlet for his energies after his children went away for college. He’d been going to the IMA to lift weights since he was an undergraduate, but when he signed up for UW Recreation’s UWild Adventures Basic Climbing class, he admits he was treading into unknown territory.

“I remember when they were building the addition to the IMA,” he says. “I knew the Crags Climbing Center existed. I would come here and lift weights but I never put [climbing] in that box of things I did. Learning to climb at the Crags was a totally different experience than I expected.”

Both Lawrence and Vardaraj speak about how hard—and how rewarding—it is to “reach up and grab” the next hold. They say overcoming that mental barrier can be extremely challenging, but is also entirely worth it, remarking that the process builds in small steps. As you learn one climb, you then move to the next, until suddenly, you reach for the hold and “it is just there!”

They say moving beyond the mental barrier to convince yourself to hang on for just a little bit longer can be one of the most difficult parts of climbing, but once you do so, you only become a better climber. They’ve even learned some life lessons along the way.

“You might be thinking, ‘I cannot reach that hold and even if I reach it, I can’t hold on to it.’ There’s so much self-doubt,” Vardaraj says. “But in reality, if you just reach for it, you can finish the route.”

Vardaraj says it’s a mindset he’s been adopting into his daily life away from the climbing wall.

“I think I can’t do something, but in reality, it’s easily possible,” he says. “I think that’s the biggest thing I’ve learned about myself through climbing.”

Looking for their next challenge, Vardaraj and Lawrence signed up for UWild Adventures’ Real Rock Climbing class, traveling to Exit 38 to test their skills outside of the Crags Climbing Center on slabs of rock, which, unlike an indoor climbing gym, don’t offer the obvious route choices of where to place your hands and feet. The thrill of making those free form, independent choices was an eye-opening experience for both of them.

But the best choice of all was to show up in the first place.

Contrary to what many might think, climbing is accessible for all levels and abilities. Lawrence says staff and faculty sometimes might be intimidated to come to the IMA because it’s filled with young, fit people, but that that shouldn’t stop them.

“If you can get past that, you’re just dealing with people and nobody is pre-judging you because of your age difference,” he says.

Lawrence credits UW Recreation staff for the help and support he’s received along the way in his journey as a climber.

“They’re very accommodating,” he says, adding that learning from a student is “really a different kind of relationship, but really, it’s just person to person.”

Vardaraj agrees, adding that he believes visibility is a key factor in getting people to try something they may not realize exists on our campus. Once they do, the avenues and outlets are endless.

In addition to their weekly climbs, Lawrence and Vardaraj have continued to take UWild Adventures’ climbing classes together, including technique and footwork workshops. 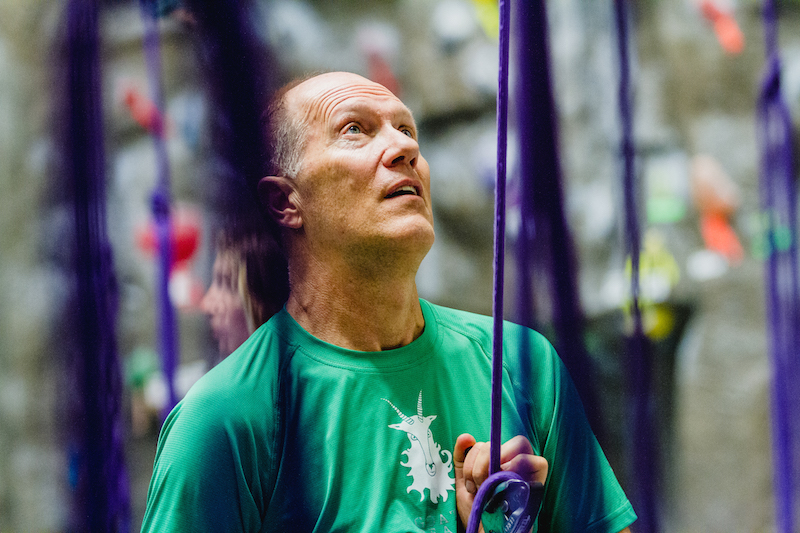 They are currently signed up to take the lead climbing class—what Vardaraj describes, “a whole ’nother scary factor.”

Watching the two climb together, it’s clear they’re as comfortable in each other’s company as they are working to reach for the next hold. Climbing—and the connective, collegial qualities it carries—now comes easily.

“The thing about climbing,” Vardaraj says, “is that you’re actually much stronger than you think.”

UW Recreation provides safe, accessible, and dynamic recreation experiences to engage the UW community in growth and well-being. Whether you’re a first-time climber or a returning pro, UW Recreation’s UWild Adventures is here to help you achieve your climbing goals. From classes to open climbing, gear rental, and outdoor trips, our staff is passionate about making you the best climber you can be. Learn more at here.