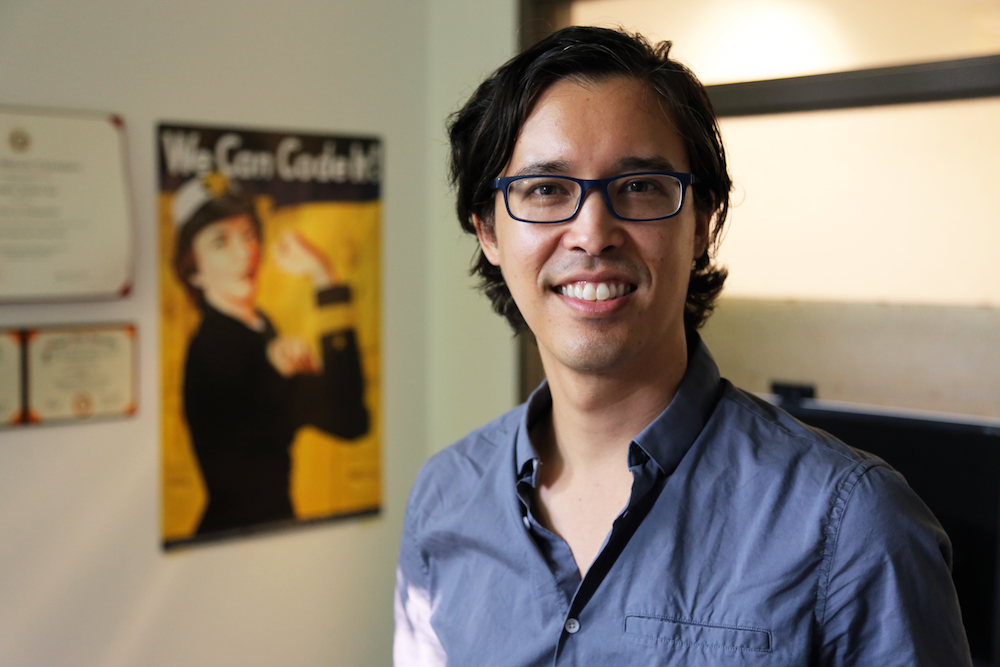 Growing up in the Portland suburb of West Linn, Oregon, Ko would set her alarm in order to make a 7 a.m. computer science class offered at her high school during “zero period.” While most of her crack-of-dawn classmates used the hour to tinker with multi-user dungeon games popular in the late 70s and early 80s, Ko saw the class as a serious opportunity to advance programming skills she’d begun honing on a TI-85 graphing calculator since middle school.

Ko sought out feedback on the programs she was in the process of writing from the class’s teacher—a student from a nearby community college only three or four years her senior—and in return received in-class assignments she remembers being as informal as they were influential.

“This guy would bring in his homework from community college classes and give them to me to try to do,” Ko recalls, adding with a laugh, “I don’t know if he had already completed them himself.”

It was a free-wheeling, do-what-you-like environment that stands in stark contrast to the more studied approach of the Code & Cognition Lab Ko runs today as an Associate Professor and Chair of the University of Washington Information School’s Informatics program and the University’s interdisciplinary Human-Computer Interaction and Design program. But Ko posits that the “informal learning context” provided during “zero period” was directly responsible for influencing her own development and interest in the field that later became her profession.

“Learning about computing happens in many contexts,” Ko says. “It’s not just about universities and schools; a lot of informal learning happens on the web, in libraries, between friends. I guarantee you if you ask any student or faculty member in Informatics or Computer Science, they’ll have one of those informal mentoring relationships.”

At the University of Washington, there is no shortage of people you could ask.

The study of how to apply data, information and technology to solve problems in a given field, Informatics is the second most popular major at the UW. As recently appointed Informatics Program Chair, Ko fielded more than 800 applicants for this year’s incoming class, which will ultimately total about 210 students.

When the program launched in 2000, it numbered 35 students. Senior Lecturer and Director of IT Scott Baker, who served as program chair since 2007 before recently turning the position over to Ko, described its growth over the past decade and half as “astounding.” It’s been so popular that the iSchool recently launched a minor.

Inclusive of students who are admitted directly as freshman, between 450 and 500 undergraduates major in Informatics at a given time. Yes, they learn to code, but they also learn to harness elements of computer science, information science, design, and ethics to solve problems and empower people.

“I think the iSchool is the nexus of where all the abstract knowledge in academia meets the world in a valuable way,” Ko says. “The world doesn’t care about disciplines; it cares about problems and solutions. Every single piece of progress I make on my research is because I’m synthesizing perspectives from other disciplines and using that to drive discovery at the boundaries of things.”

Ko conducts two types of research in her Code & Cognition Lab. At one end is social science and education research about any kind of learning phenomenon in computing.

“We might be running a class where people are learning something, but at the same time that class is also an experiment in itself,” Ko says. “We’re trying to understand that interaction between people and material for learning.”

By gaining a greater understanding of how people learn from computers—and each other—about computing, Ko and her team can subsequently turn their attention to the lab’s other objective: developing new learning technologies to both speed and smooth learning processes—not just in universities, but at all learning levels and in all learning contexts.

“We tackle those learning problems by creating new learning technologies,” Ko says, adding that some of her PhD students have recently been focusing on rapid program language learning—in other words, how can popular programming languages be taught most effectively within the space of a few days?

The question extends to an examination of learning strategies employed by coding bootcamps and similarly intensive short-spurt initiatives. Ko contends that gaining a greater understanding of what’s effective when it comes to informal, non-traditional learning will aid in developing better approaches to learning—and teaching—across the board.

“How is it that someone in a class is learning; how do I create empowering and supportive environments and learning technologies to help them learn about computing effectively?” she asks.

The questions Ko asks are as much concerned with teaching and learning as they are with equity and economics.

“Being able to learn informally on your own time, having the intrinsic motivation and resources to do that, that’s a position of privilege,” she says. “If you look at research on who engages in informal learning and what they need to be successful at it, it’s generally people who have encouragement from parents, siblings, mentors, and teachers, resources to access high-quality materials, and time and persistence to learn.”

She points to the fact that the skills gap is one of the primary contributors to income inequality.

“The biggest challenge in the future is, if you want to get that next job or make that career pivot, somehow you have to subsidize your learning,” Ko says. “Employers aren’t doing it anymore and the government is doing it far less, so where do you do that learning? How do you find the time for it? The only way to do that is to somehow support more efficient and effective informal learning in smaller amounts of time.”

Another key factor in the learning process—whatever the skill or technology? Belief.

Once a positive learning mindset is in place, Ko says, a lot of skills start coming for free. Spurred on by a consistent flow of motivation, students seek out and establish their own informal learning contexts, supporting their own growth in the process. But that support needs to start somewhere. Ko says she believes that of the 50-some information schools around the world, the UW’s iSchool will bear the standard in leading the field forward.

“There’s so much interesting research and teaching here partly because we’re so radically interdisciplinary and connected to the other parts of campus,” she says. “This is going to be the place in the world that other information schools look to as far as how to teach, how to do research, how to structure learning, and faculty life. We’re going to define the future of what an undergraduate education in information looks like—that’s our ambition.”

Ko stakes her claim on the fact that, in so far as the lineage of disciplines, information science is a field that stretches back decades before computer science first emerged.

“We’re bringing this back to the future and saying, this is what information means now.”

Amy Ko holds a B.S. in Computer Science and Psychology from Oregon State University and a Ph.D. in Human-Computer Interaction from Carnegie Mellon University. For more insight into the work of the Code & Cognition Lab, follow along with her blog, Bits and Behavior.