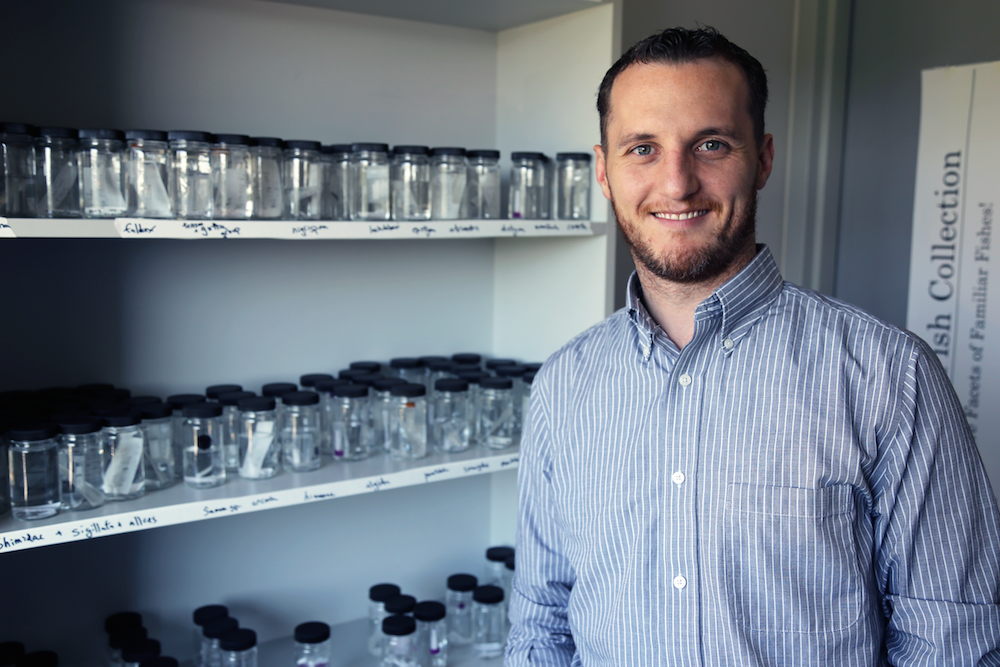 Luke Tornabene hovers above the abyss, suspended somewhere between fathomless darkness and daylight 800 feet above. A thin layer of condensation has formed on the interior of the five-person submersible—the product of warm air within the cockpit reacting to increasingly cold water without as the research vessel slips ever deeper into the dusk-colored Caribbean waters somewhere off the coast of Curacao.

On Tornabene’s first dive, a droplet from above almost sent him into a panic, but the ichthyologist now knew to expect the occasional splash of condensation as a part of the four to seven hour-long submersions. It perhaps stood to reason that, even from within the humming confines of a state-of-the-art research sub, one couldn’t explore the biodiversity of as yet unstudied stretches of sloping seabed without at least getting a little wet. 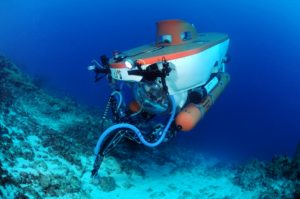 After a 20-minute descent, the vessel draws alongside a steep reef, cruising well below its maximum speed of four knots. Coming to a complete stop, it trains bright LED panels on the reef’s intricately varied surface, illuminating teeming swirls of small, colorful fish.

Revealed is as diverse a collection of marine life as could be found on earth. About one in every three fish Tornabene spies through the sub’s 40-inch forward viewing dome is new to science.

“You don’t get to see that very often in the world—above water or below water,” says Tornabene, an assistant professor at the University of Washington’s School of Aquatic and Fishery Sciences studying the evolutionary relationships and biodiversity of fishes.

Such biodiversity is one of the distinguishing features of the “Twilight Zone”—a largely unexplored band of ocean between 100 and 1000 feet deep.

“We like to think of it as the area of the ocean that scientists forgot about,” Tornabene says of these mesophotic (middle-light) ecosystems. “That’s largely because it lies below the depths reachable by SCUBA divers and above the depths typically studied by deep-sea biologists.”

When deep-sea biologists wish to sample the diversity of life dwelling at or near the bottom of a given stretch of ocean, they will often trawl a net along the flat, sandy sea floor. But getting sense of what life exists in the area between the sea floor and 150 feet beneath the ocean’s surface can be markedly more difficult.

“Much of the habitat between the abyssal zone and the scuba-accessible zones is a vertical slope,” Tornabene says. “You can’t drag a net over these vertical slopes because you’d rip the biodiversity apart.”

Proliferating throughout these mesophotic reef zones are thumbnail-sized gobies, the most taxonomically and ecologically diverse family of marine fishes in the world. Studying them—and their changing interactions with the ecosystem as a whole—calls for a degree of delicacy and nuance delivered in the unlikely form of a six-ton submersible (the technical difference between a submersible and a submarine is that submersibles are not fully autonomous, relying on a support facility or vessel for replenishment of power and breathing gases). 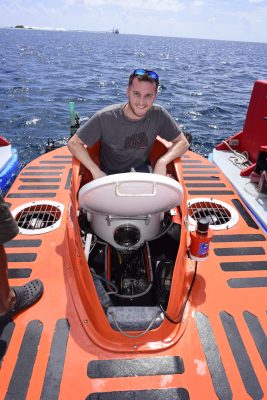 Tornabene prepares for a submersible dive off the coast of Curacao with the team at the Smithsonian.

“When I give presentations about this stuff, I show a picture of Bambi’s mom and an M1-Abrams tank,” Tornabene says. “You’d think it would be overkill, but it [the submersible] is actually extremely effective.”

Tornabene and his fellow researchers capture fish and other marine samples using specialized suction tubes and a basket fixed to the sub’s front, while HD video and still cameras record all the scientists see. It’s all part of the process of identifying and classifying what presently exists to better understand broader trends of movement in the ocean during a time of potentially drastic change.

“Understanding how species change their vertical distribution in response to climate change is incredibly important, but there’s no way you can even begin to understand how species move in the ocean if you don’t know where they live in the ocean.”

As climate change continues to warm oceans, shallow-water species begin swimming deeper in search of cooler waters. Tornabene says these mesophotic reefs can potentially serve as a refuge for shallow-water species, but there are some species living on these reefs that might not be so easily displaced. Invasive species such as lionfish have already entered these deeper, cooler zones as outside predators.

“When climate change forces species to go deeper, it’s forcing them out of their home,” he says. “The first thing to see when we go down there is understanding the diversity that’s there, their range of temperature, and if there are limits to their distribution.”

Tornabene says a driving question of his research is, “when a species are given a completely clean slate to change their behavior, what happens?” adding that we are only just beginning to understand how species are responding when taken out of their native environment.

His next dive is planned for later this summer off the coast of Honduras in a submersible capable of diving as deep as 2700 feet. The more he learns about the ocean’s Twilight Zone, even more layers of ocean open beneath it, awaiting exploration and analysis. He describes the ongoing research process as “taking a series of slices out of the ocean from what we don’t know.”

To date, less than five percent of earth’s oceans have been explored.

“We’ve sent more people to the moon than we have to the bottom of the ocean,” Tornabene says, adding that the equivalent cost of a single day of moon or Mars exploration would fund hundreds of years of ocean exploration and sample collection using submersible technology.

And while Tornabene says he’s the first to cry foul whenever funding for space exploration is cut, he says the biodiversity of life beneath the waves speaks for itself when it comes to articulating a vision for the future of scientific exploration.

“Nobody’s found a new species on Mars yet.”

An aquarium photo of the Ember goby, a new species of fish discovered off Curacao by Tornabene and his former colleagues at the Smithsonian.

Growing up on Long Island’s Great South Bay, Luke Tornabene always felt a deep connection to the ocean. But beyond excursions on a 17-foot Boston whaler to go fishing, clamming, and crabbing, he never harbored aspirations of being a marine scientist or researcher.

“I wanted to teach 10th and 11th grade biology and be a wrestling coach,” he says.

Then, as part of a senior research project, he volunteered at the American Museum of Natural History in New York, working with James Van Tassel, a retired high school teacher who’d earned his Ph.D. in ichthyology only after retiring from the classroom. Tornabene recalls “working mostly with dead fish in jars,” but that Van Tassel told him if he got good at that, it would eventually lead to working with live fish.

The research finally came alive later that year when Tornabene traveled with his mentor and the Smithsonian to conduct research in waters off Panama.

“That really fostered this idea that I didn’t just want to be a researcher, but an educator and mentor as well,” he says. “I realized you could actually study evolution, fishes, and ecology for a living and that it was more than just being in a room full of jars.”

But even so, specimens in jars still account for a significant portion of his work. After completing post-doctoral work at The Smithsonian in Washington, D.C., Tornabene joined the UW in January to serve as curator of fishes for the Burke Museum, where he presides over a catalogued collection of 450,000 fish specimens preserved in ethanol in the basement of the Fishery Sciences Research building. He also oversees the storage of 2.5 million otoliths: bones from the head of fishes which preserve in layers of calcium carbonate an annual account all the chemical properties of a fish’s environment.

By Tornabene’s estimate, the Burke’s is the largest collection of its kind in North America. Some specimens are more than 150 years old.

“It’s more than just a fish in a jar. It’s a catalog of life and a snapshot of time,” he says. “We have 11 million records of the lives of organisms dating back to the 1860s.” 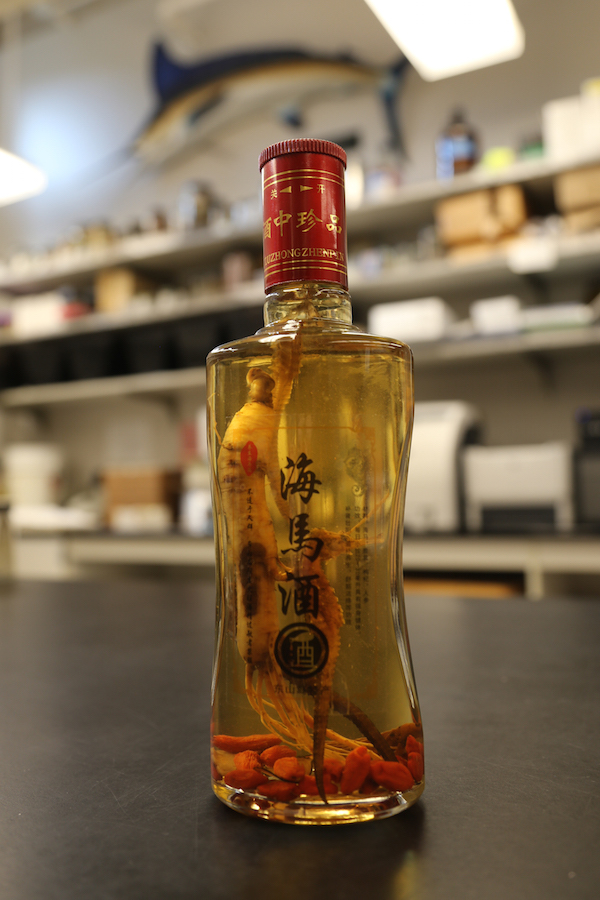 Strange Brew: A variety of wine infused with seahorse from southeast Asia is just one of many items that find their way to Tornabene in his role as Curator of Fishes at The Burke Museum of Natural History and Culture.

The collection’s size only keeps compounding. In addition to more academic specimens, Tornabene will occasionally be shipped items confiscated by customs agents, who, likely perplexed as to where to send something as strange as seahorse wine from southeast Asia, bring them to the attention of Fisheries Sciences.

Beyond the odd bottle of exotic spirits, the collection as a whole is extremely flammable due to the high quantity of ethanol used to preserve each specimen.

“We’re one of the only buildings on campus that is allowed to have that much alcohol in one spot, so, unfortunately, we will not be going with them to the new Burke,” he says.

Even so, the construction of the new museum space finds Tornabene as excited as anyone.

“Being able to put the research that we do on public display is going to be amazing,” he says. “I’m really fortunate that I get to step in as new curator. I get to be involved with exhibit design and placement of specimens and where we want to take the audience. To me that’s super exciting.”

He says he perceives a growing disconnect between regional and state museums and the universities that support them, but that that’s not the case at the UW.

“The UW maintains a super strong relationship with the Burke and that’s something that should be acknowledged,” he says. “We should be proud of it.”

Another thing he’s observed in his first half-year at the UW is the level of engagement from students in the Fishery Sciences program.

“This is not a knock on students that I’ve worked with in the past, but this is the number one Fisheries program in the world,” he says, adding that in his fish biology class last quarter he had 100 students, whereas elsewhere a professor might only expect 15 to 20.

“Across the board, the students in my class were absolutely brilliant and incredibly passionate and all-hands-on-deck all the time,” he says. “For me to experience that in my first quarter here, it’s a fire.”

Just keep it away from all that ethanol.

Luke Tornabene received his B.S. from Hofstra University and his M.S. and Ph.D. from Texas A&M University-Corpus Christi.