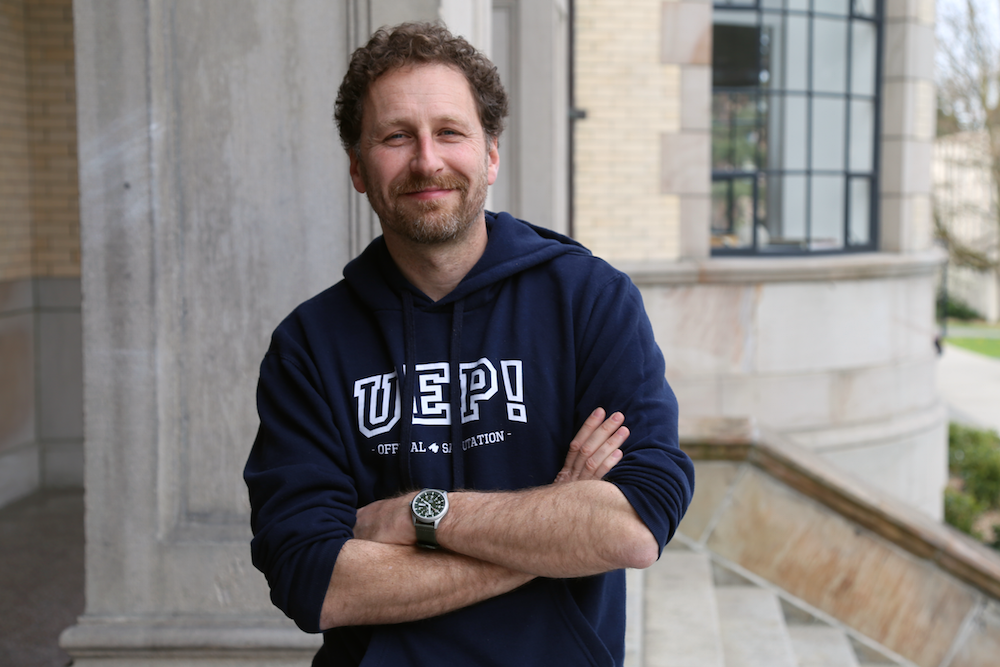 Much as museums might make it seem, the past is not static. Its inhabitants no less frozen in amber or suspended in action poses as part of some done-up diorama than the scene outside your window at this very moment. Indeed, if there is one constant throughout history, it’s that humans move. In the process, we scatter our path with stones, shards, and shattered monuments that not only mark the way we’ve come, but also point the way we’re going.

But how is it possible to follow in the footsteps of a Neolithic hunter? Or edge a toe into the sandal of a Bronze Age priestess? For Marcos Llobera, associate professor in the University of Washington’s Department of Anthropology, the surest step to discovering the ways we move through and make sense of the world is to look at the landscape.

“Even as you move through our campus, everything is changing around you,” Llobera says. “The configuration is changing; you’re moving at a certain rate; that all contributes to the human experience and that’s what, as an archaeologist, you can explore.”

As head of the UW’s Digital Archaeology (DigAR) Lab, Llobera is something of a hybrid. Equal parts computer programmer, archaeologist, and anthropologist, he employs computational methods to analyze the landscapes human cultures have shaped over time. In the process, he is able to determine how those landscapes, in turn, shape cultures. Llobera describes himself as the reverse of a landscape architect: instead of engineering a space to influence human experience, he looks at how spaces engineer humans and their societies.

“What I want to do is ask, ‘What are the properties of a landscape as we encounter it, as we move through it? What comes into view and at what speed? How are these properties appropriated by a society in order to generate or reinforce certain experiences that were related to that society?’” he says.

As an example, Llobera recently worked studying Neolithic burial sites (barrows) on a peninsula in the northwest of his native Spain. Using a Geographic Information System (GIS), a type of computer system for capturing, storing, checking, and displaying data related to positions on Earth’s surface, Llobera located random points on the peninsula and then, for a range of three distances, ran a simulation 50,000 times to generate an image of the peninsular landscape’s most likely corridors of travel. By identifying the area’s main corridors, Llobera was able to derive specific insights about the burial mounds and the people who built them.

“The simulation showed that the monuments were located in main, high-traffic corridors,” he says, adding that the data simulation allowed him and his colleagues to deduce that the barrows were located there after the fact, and not as sign-posts or way-markers as initially was surmised. “These people didn’t need the monuments to tell them where they were. If you’re someone who lives in this landscape, you don’t need to be told how to get home. The monuments were a product of the people’s movement.”

This process of using computational methods to identify how humans were most likely to move through a landscape enables Llobera to ask more informed questions about the meanings of specific locations, providing insights onto how ancient cultures lived and moved which, until only recently, would not have been possible to obtain.

“Up till now, it’s been very difficult to think about the meaning of landscape properties, because, until recently, all we had were flat maps,” Llobera says. “What I started doing was seeing if we could approach this study by using a computer. Let me start developing methods to begin to understand some properties of the landscape that we gather within the landscape as we start moving.”

Since joining the UW twelve years ago, Lloberas’ research has focused mainly on developing new computational methods for landscape analysis and surveying different parts of the Mediterranean. For the past four years, he’s returned to Mallorca, the island of his birth,  to survey and document a series of multi-period sites spanning the Bronze Age, Iron Age, Roman, and Islamic periods with groups of UW students. Rather than conducting extensive excavations, their focus is on intense surface collection

“We line people up 10 meters apart and each of them have a GPS. Every 10 meters, they stop and collect a point. Then, within a certain radius, we collect anything that is on the surface that is prehistoric, historic, pottery, whatever,” Llobera says. 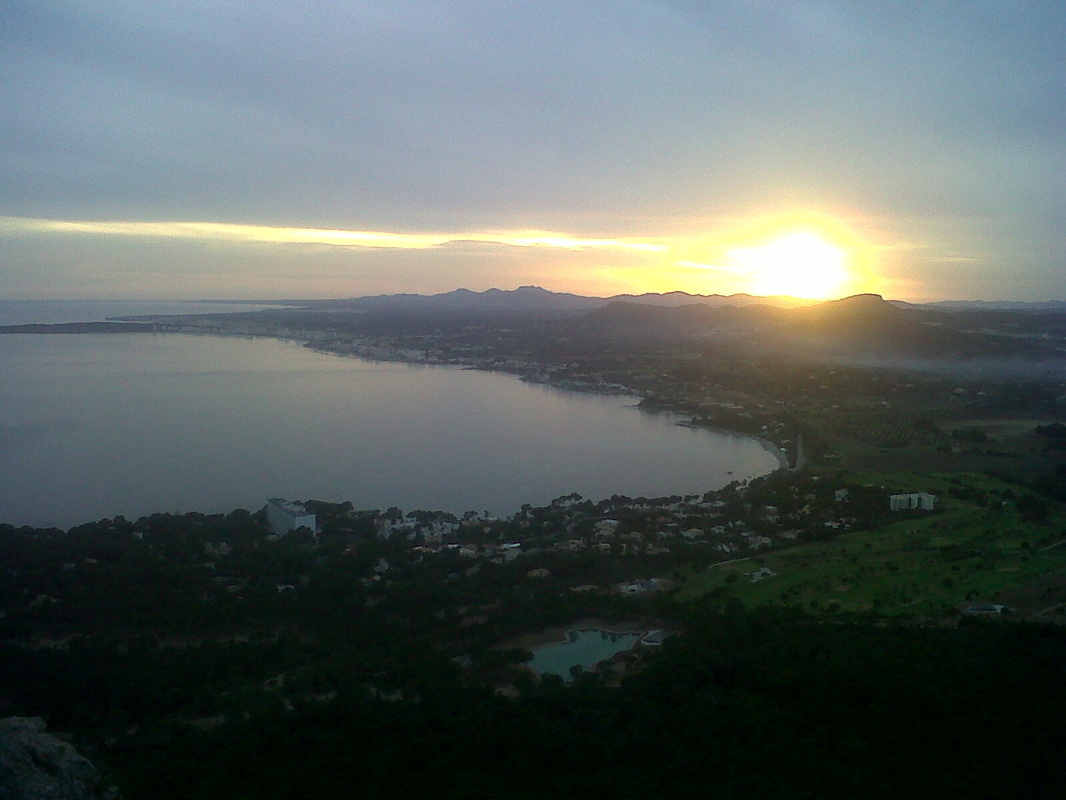 The Mallorcan landscape is home to many layers of human culture, dating to prehistoric times.

“By collecting information this way, we’re able to determine what happened across the landscape through time. We’re also able to provide meta-information regarding our survey, such as how much time we have spent searching certain parts of the landscape and how efficient was our recovery of material.”

Thus far, a combined team of students from both the UW and Spain have collected more than 18,000 points of landscape data.

“A lot of the stuff we’re doing isn’t cutting edge from a computer science point of view,” Llobera says, “but bringing that technology into archaeology can potentially make a huge difference.”

Llobera believes the possibilities of fusing computer science with archaeology are boundless, technological and computational advances having only just begun to bring the true possibilities of its promise to bear. While the rise of the Age of the Computer hardly registers on the scale of prehistory, for Llobera, it’s a development that has run parallel to his entire life.

Back to the Lab Again

“I wasn’t always an archaeologist,” Llobera says over a coffee in PACCAR Hall. “But I was always someone who was interested in everything.”

Growing up in Palma de Mallorca, the largest city of Mallorca and capital of Spain’s Balearic Islands, Llobera had completed three years of calculus and two years of physics and chemistry, before he’d finished high school. He’d often arranged to stay after school in a small computer lab to teach himself about the machines and what they were capable of. By age 14, he’d taught himself to program in BASIC. This strong grounding in math and science would lead Llobera to pursue an undergraduate degree in aeronautical engineering in the US.

“I ended up doing a lot of math,” he says, “I realized, ‘I’d like to do some more math,’ so I switched and got my degree in math.”

The move from an engineering degree to a science degree opened up new academic avenues and the chance to take new courses. Foremost among them was archaeology, which Llobera says he’d read about with much interest while growing up, but which until then had always seemed “just a romantic idea.” He credits a series of enthusiastic professors with igniting his nascent interest into something more. Soon, he was using his natural affinity for programming to teach his archaeology professors about computing. The student was fast becoming a teacher in his own right.

After completing a master’s in Information Technology and Archaeology from Leicester University in England, Llobera received a scholarship from Oxford University to pursue a doctoral degree, for which he began designing computational methods for analyzing landscapes and representing them digitally.

“There was this realization that we need to pay attention to how people experience landscapes,” he says. “Rather than looking at it as though you were in an airplane—an odd experience to some extent—people were interested in what happens when you move around and things come into view. That’s how we all experience landscape.”

At Oxford, he found himself back in the computer lab once more, using digital terrain models to derive new ways of analyzing landscapes, such as estimating the volume of visible space for an individual at a given point in a landscape or calculating and index of topographic prominence. It was slow going, so to speed up the work, Llobera employed stealth tactics.

“I remember coming to use some labs at night, distributing my jobs throughout a bunch of computers, then coming in in the morning to get the results,” he says. “If you repeat the same operation for every location , you end up with a new image—an image no one has seen before.”

Llobera says he views his work as both a complement to and extension of traditional archaeology.

“I wouldn’t want to get rid of actually going into the field,” he says. “It’s good practice to go into a landscape. It gives you a grounding and understanding of things and, from that, you gain insight, but it’s difficult to go from the insight to creating an argument. Here is where computers come in very handy.’”

From his own experience, Llobera knows other archaeologists can benefit greatly from improved facility with such things as simulations, visualizations, and data mining.

“It would be incredible,” he says of a future in which the fields of computer science and digital archaeology could collaborate more closely. “It would precipitate new possibilities, new lines of research.”

The challenge, Llobera says, is attracting, providing training for, and retaining students who might be interesting in doing both computer modeling and archaeology.

“We need hybrid archeologists who can do modeling, who can do programming,” Llobera says, quick to laugh off the notion that it’s the type of person with a profile as unique as the professor himself. “We cannot expect people to come with that computational ability. We need to provide this training—and that’s the challenge.”

He says the UW is the “ideal” place to take that on.

“In theory, we have all the expertise we need to train these types of people,” he says. “Everything we want is here. We just need to put it together.”

Llobera says he enjoys the philosophy and fieldwork of archaeology in equal measure, but it will always be the computational programming side that yields the most creative satisfaction.

When Llobera needs to step away from a particularly frustrating programming problem in the DigAR lab, he practices Shorinji Kempo, a Japanese martial art considered a modified version of Shaolin Kung Fu. But the lab, with its banks of computers, always calls him back in the end. Most of the software he uses is open-source and freely available.

Marcos Llobera holds a B.A. in Mathematics from Southern Illinois University, an MSc. in Information Technology and Archaeology from Leicester University, and a D.Phil. from the University of Oxford. Learn more about Llobera’s work to understand landscape transformation and cultural encounters in the ancient Mediterranean and pre- and proto-historic Mallorca here.