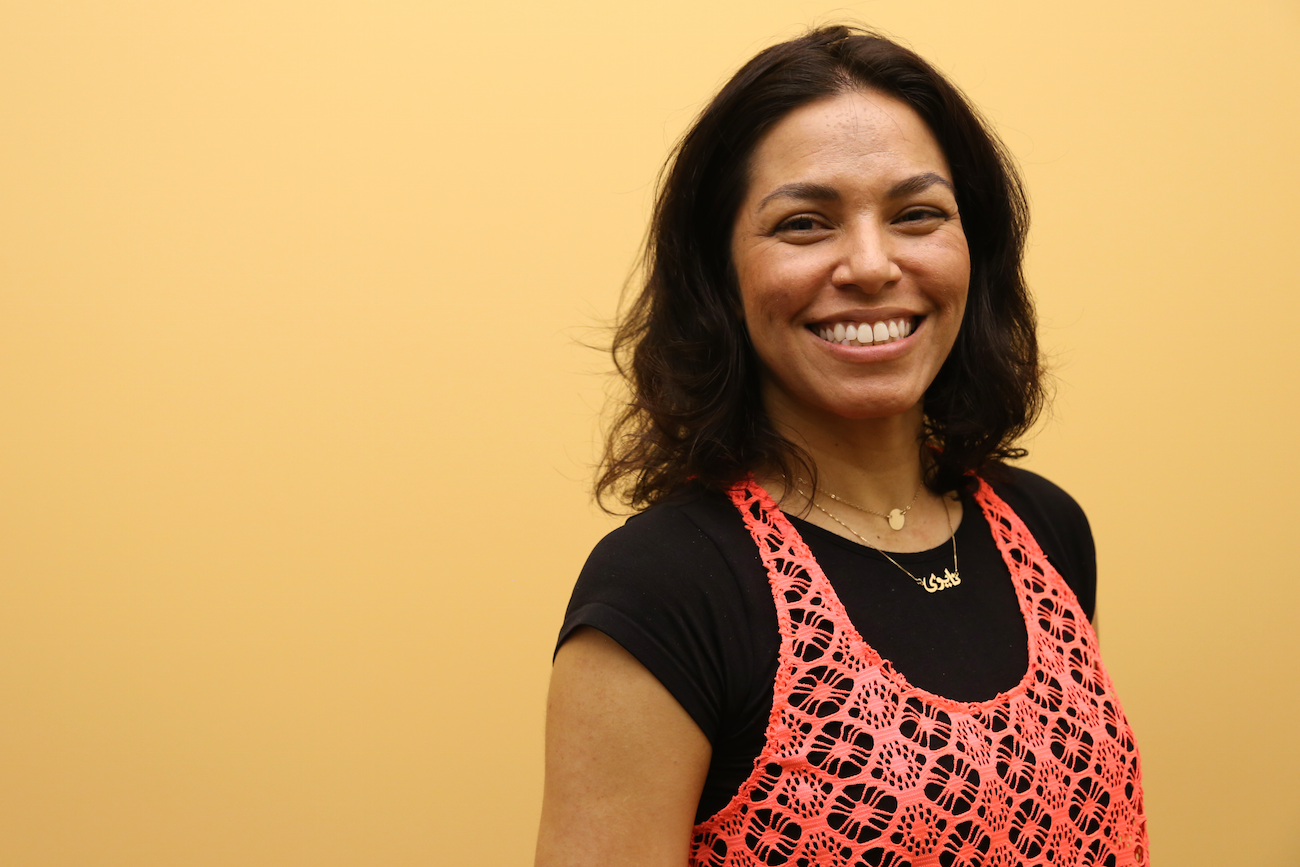 Naomi Macalalad Bragin teaches dance. But you won’t find her teaching only steps. She’s more interested in what’s happening off-stage—underground and in the street.

The assistant professor in the School of Interdisciplinary Arts and Sciences at the University of Washington Bothell is a performance ethnographer whose work places her at the convergence of dance, pop culture, media, and black political theory. Hers is a language of movement—and of a movement.

“Street dance is outsider dance,” she says. “It’s about connecting and communicating with people on a non-verbal level.”

This quarter at UW Bothell she is teaching Street and Club Style Workshop, which examines the foundations of hip-hop and street dance styles from the point of view of black aesthetics. But isn’t there an inherent contradiction to teaching tenets of street dance in the studio? Yes. But, then again, that’s the point.

“Because hip-hop is now widely taught in the studio and that’s what people learn, the idea of the street is more ideological,” Bragin says. “What I try to teach people is that this dance form was never accepted in the studio—it was originally banned and prohibited because it was practiced by black and brown kids usually from the working class. It wasn’t seen as dance.”

The term Bragin uses to describe the intersection of her particular areas of interest is “kinesthetic politics.” In other words, how a body’s movement can serve as a mechanism for senses and sensations that go beyond the visual.

“To talk about kinesthetic politics is not to say that movement sensation always takes precedence,” she says. “It’s just to say, movement is an occasion to explore beyond the boundaries of self.”

Bragin is keen on taking the concept of kinesthetic awareness and applying it other realms—a process she cleverly dubs “kin-ethics” (“kin,” as in kinship).

“What are the ethical ways we engage in our social relationships and how might we actually act in an ethical way to change those relationships?” she asks. “Street dance is a key place to study that. When we dance together, we’re often tuning in to other senses, not even just singular senses, but a blending of senses.”

It gives rise to another apparent contradiction: how can you study outsider movements from inside an institution—in this case a university? Bragin engages the question head-on with students in the dance studio.

In Street and Club Style Workshop, students research hip-hop as a global phenomenon through a critical new media lens, considering everything from underground competitions and reality dance shows to how it circulates in and is filtered through cyberspace. When dances like the Nae Nae or Juju on That Beat go viral and begin circulating in mass culture, people across the globe replicate the phenomena by learning the steps. What’s left unlearned, however, are these dances’ original contexts and rich cultural meanings. Somewhere along the way in the transition to global consciousness, the improvised, communicative, connective currents of hip-hop dance—and black culture at large—are sometimes lost.

“I encourage my students to think more critically about the distinction between very highly choreographed dances and the improvisational aspects of hip-hop culture, the value that is given to something that can easily be marketed as a product versus something that comes from the life, sociality, and interrelationships of folks,” Bragin says. “There’s an improvisational drive to all the dances we do, whether it’s the Nae Nae or the Soulja Boy or line dances like The Cupid Shuffle or The Wobble—they are choreographic building blocks that allow the dancer to go improvise and innovate.”

It’s something perhaps best understood in terms of language. When you learn the steps, you’ve learned the vocabulary, but Bragin asks, “can you speak the language with the flow and the grammar and the different ways we put words together coded with multiple meanings? That whole aspect is not something you can learn watching a video on YouTube. It’s a much richer phenomenon that’s happening.”

Bragin in no way casts herself as the sage on the stage—or in this case, the street. Rather, she describes her process as an investigation and conversation conducted with and by students.

“My goal is to open students’ minds, but also be able to question my own assumptions about what I know and what I don’t.”

In a dance class, that means giving students the background to think about the histories and communities who have been instrumental in dance’s evolution and then asking them to question their own practices in the context of a larger conversation on how race and power influence different social configurations.

So what is the difference between appropriation and innovation? Creative theft (or “biting” as Bragin and other dancers refer to it) is one of the biggest issues in hip-hop writ large.

“I try to break open that notion that this is owned,” she says of class efforts to critically examine mass culture’s commodifying tendency in an age of shared media. “If we just focus on theft and credit, property and possession, we’re still staying within that economy. I try to make folks aware that even as we do have to give credit where credit is due, we do have to think critically about how when I do this movement, this means something different for me than a young black kid from the hood who’s coming from a very different place.”

Bragin says it’s part of an ongoing process of being present and aware of the underpinnings of cultural traditions other than one’s own.

“There is a lot of important history and culture that should be respected and learned,” Bragin says. “There’s not any easy way to do the work. It’s really messy.”

Anything experimental usually is.

Bragin grew up in Los Angeles, spending her formative years—12 of them to be exact—as a competitive classical violinist.

“It was a high-pressure environment steeped in a particular form of performance tradition,” she says. “I never learned improvisation in music.”

When she got to Wesleyan as an undergraduate, she still played violin and planned to major in English, but instead found herself drawn to a dance program that embraced experimentation. She switched her major to dance and began studying improvisational expression, while also exploring the club and rave dance scenes in New York and the northeast on weekends.

“I’m used to the dirty, nitty-gritty clubs in New York and L.A. where it’s funky and sweat’s dripping down the walls,” she says. “You’d see all types of people from all walks of life.”

From there, Bragin’s education swiftly became one of dueling dualism born of the structured improvisation of the postmodern dance studio and the thrumming, vibrant dance club scenes of 1990s New York and Los Angeles. She was trying to find ways to form a bridge for those dance forms and bring them into the context of the stage and the studio at the university.

Her unique participation in both led her to a Ph.D. in Dance and Performance Studies at UC Berkeley, prior to which she had been teaching in schools, community centers and transitional facilities in the Bay Area. From 2002 to 2008, she served as founding artistic director for DREAM, an Oakland street dance company that toured schools and universities locally and nationally.

“We created pieces and staged them,” she says. “But I like that—I can think through the contradictions of what I’m saying.”

So where does Naomi Bragin the performer leave off and Naomi the researcher begin? For her part, she likes to keep it fluid. The truth is they inform each other.

“Essentially, I’m teaching what I do, which is using performance as a lens to ask questions about your research,” she says. “Performance becomes a method through which you develop your questions and you can actually test some of your ideas out through an embodied practice. It might look like dance, theater, or performance poetry.”

Right now she’s working on her manuscript, Black Power of Hip-Hop Dance: On Kinesthetic Politics. It’s an activity she describes as more “withdrawn” compared to the outreach and events she’s usually accustomed to as a researcher, such as The Soul Train Ball and Battle, a dance memorial she helped organize in Oakland in 2012 after the passing of Don Cornelius, the host and creator of the groundbreaking musical variety show, Soul Train, which Bragin calls, “one of the most important vehicles for the worldwide dissemination and circulation of street dance.”

“It was a chance to think through those connections as part of a community event where everyone came together and created these collective structures in the moment,” she says.

Still in her first year at UW Bothell, Bragin says she looks forward to hosting more events and engaging in similar forms of outreach, specifically gathering students on campus and engaging the University in exploring its role in the wider Seattle area.

“I really want to create a sense of community around these dance forms in a new place on campus. I want folks to know that there are classes where they can do this for credit.”

Next quarter, she’ll be teaching Theorizing Black Performance, which considers both popular and avant garde culture from the stage to the street and the relationship between black aesthetics and politics, as well as an interdisciplinary performance workshop, Doing Performance Research.

For Bragin, a central question is where is studying actually happening and how can “study” evolve beyond the sheer disciplining of knowledge to a place of more equitable distribution thereof. Which is why she says she’s thrilled and thankful to be at the School of Interdisciplinary Arts and Sciences, which she feels is “committed to changing and transforming institutional politics” through creative ideas and conversations.

“The art scene in Seattle is extremely rich and there’s a lot of room for experimentation,” she says. “It’s less industry-oriented—that can be an asset for artists because they have more freedom to experiment.”

What about the club life? It’s just not the same as it used to be anywhere anymore, Bragin says with some sense of nostalgia, but without any great sense of longing. She ascribes the change to the regulation of nightlife and the movement of wealth into cities—a world of dancing outcasts becoming classed out.

“I’m not somehow going to save the past and bring it back. I don’t really believe in that. I believe that hip-hop is going to continue and change and take different shapes and that’s what I want to explore with students.”

Whether in dance forms or in how we see, treat, and connect with one another, Bragin says that change happens everyday on a micro level.

“I don’t feel like revolution is something we’re waiting for; I think it’s something we can slip into and experience moments of all the time. We have to stop waiting for it and recognize how we can create that change in our lives.”

Naomi Macalalad Bragin holds a B.A. in Dance Choreography and Performance from Wesleyan University and an M.A. in Folklore and a Ph.D. in Performance Studies from the University of California, Berkeley.

Love to hear a lecture by you- do you ever speak for faculty or community? Thanks for all the interesting insights