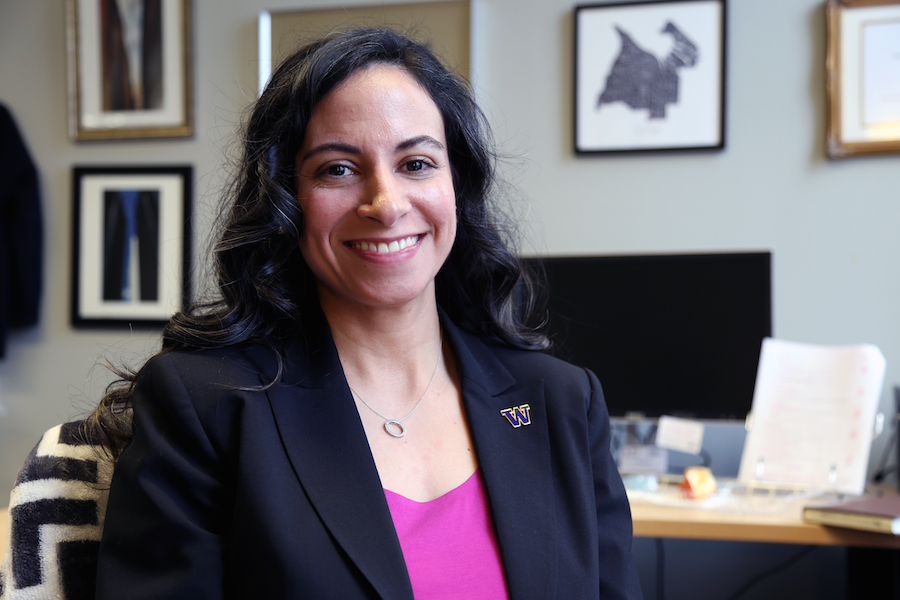 Anaid Yerena’s textbook is out of date. But the assistant professor at University of Washington Tacoma’s School of Urban Studies wouldn’t have it otherwise. Yerena teaches the course “Housing in America” and the text in question, Introduction to Housing, was last published in 2006.

“I need you to be reading this book within the context of the fact it was published prior to 2008,” she says. “Which, in housing, is an important moment.”

The out-of-print edition is intended to provide students a historiographical context for the period leading up to the 2008 housing crisis and is complemented by readings from an up-to-date course book on US housing policy.

“Look—this is what we thought,” Yerena says of how she helps students approach the text. “We made many mistakes and were moving confidently forward. Looking back at something and realizing you were doing it wrong is easy. Figuring out that you’re doing something wrong while you’re doing it is a lot harder.”

By introducing undergraduates to essential terminology and the basic tenets of US housing policy, Yerena’s course aims to inform students’ own notions of home ownership—empowering them with practical knowledge to be better advocates for themselves and others.

“This is knowledge that students might want to discuss with their friends or their parents,” Yerena says. “I wanted this course to be a gateway for any of our students who have never thought about what it means to own or rent to learn about it in a low-stakes context.”

She starts each quarter by asking students their reasons and motivations the last time they moved.

“Sometimes when you’re thinking in broader terms of housing policy, you start thinking about numbers,” she says. “I make a point in the course to show that everybody has a story.”

THE ARCHITECT AND A MASTER PLAN

Yerena’s own story began in Mexico. Born in Mexico City, she lived there for only a couple of years before the deadly 1985 earthquake prompted her family to relocate to Chihuahua. Just as she’d learned to read and write in Spanish, her family moved once again—this time to California, where her father joined a brother working in construction.

She says her parents’ frequent moves were dictated by “where they thought they could have a better quality of life.” In raising Yerena and her younger brother, they made a living working an assortment of jobs: managing companies, owning a cafeteria, teaching high school.

After just a few years in the US, her parents traveled to Great Britain as students enrolled in a community college exchange program—part of a joint effort to improve their English. There, children in tow, they were “required to log museum hours, go to the theatre, and attend concerts,” so naturally Yerena, then in second grade, would tag along.

The experience provided her a broader context through which to view the world.

“My cognitive map of the world was huge because I crossed borders so often,” she says.

The next year, Yerena and her family moved back to Mexico, where they stayed for the rest of her childhood. Yerena studied architecture as an undergraduate and for her final project worked on a comprehensive plan for the city of Montemorelos, Mexico. Tasked with making projections and proposing solutions for the city’s development over the next few decades, she conducted a survey of every parcel of land at the city’s core.

“It was nice to see how a project has repercussions in the lives of many, beyond one site,” she says. “And to understand the repercussions are not bounded, for better or worse.”

Upon graduating, she moved back to California, where she began work as an architectural designer at a firm that specialized in commercial projects—specifically, “working on twenty to thirty Starbucks a month on tenant improvements.”

The work was, in so many ways, indicative of a carefree era of commercial development. Yerena, for her part, was looking for ways to develop professionally beyond her role, participating in every project management training and career development opportunity offered at the company where she worked. As she did, she began to muse on a master plan for her career.

One day at her drafting table, she was struck by what would prove to be an instance of ominous foresight. She says she remembers thinking, “If this job were to end, what would happen to me? What would I get to keep? What could I get that nobody could take away from me?”

She determined the answer was an education, and—still living with her parents— began paying her own way through the master’s program in Urban and Regional Planning at UC Irvine.

Then, after a year balancing work and school, the other shoe finally dropped—the housing market collapsed and her company with it. 250 of its employees around the country were let go—Yerena among them. Now jobless, living with her family, and without a viable source of income, she was faced with another decision: whether or not to continue her education.

She decided to do so with the help of student loans. The decision to continue the degree gave her purpose, she says, and when the job market showed no signs of improving, she took the advice of a professor and embarked on a track for her Ph.D.

But even with stability and certainty, she was still living on an income that placed her, along with many young academics, below the poverty line. After her parents moved back to Mexico once again in 2013, Yerena—now in her third year as a Ph.D. candidate—started living in campus housing. The experience in part mirrored her research into the role community advocates play in creating more affordable housing policy.

For her thesis, she used quantitative analysis to conduct a survey of 272 cities with populations greater than 100,000 people aimed at understanding the efficacy of advocacy groups on the national level. She concluded that, at the city level, where community advocates were present, there was a statistically significant increase in affordable housing spending per capita. However, on a broader scale, advocates’ efficacy was muted when there was a lack of any cohesive regional approach.

When time came to pursue an assistant professorship, she was drawn to UW Tacoma for just such a sense of regional connectivity and dynamism.

“I felt it was a healthy region—one with potential for growth and one where this profession was going to leave me well-positioned to enter the community,” she says. However habitable Tacoma is in the short term, she still harbors some concern for its development in years ahead.

“It worries me that in Tacoma, we’re going to follow the examples of Seattle, Irvine, Boston, where what you end up doing is hollowing out your cities,” she says, referencing the fact that rents in Seattle are rising at some of the fastest rates in the nation. “The decisions that we make end up kicking people out, literally, because they can’t afford to live there. I think everybody deserves some choice to live where they want.”

While she acknowledges that everybody’s choice is limited by funds and other factors, Yerena contends that, “we are, little by little, limiting the number of choices people have and leaving them—especially the disadvantaged—with poor choices: unhealthy living conditions or semi-permanent living arrangements.”

It’s a trend that’s led her to probe an area many housing scholars let alone: homelessness.

With more than 4,000 homeless people in the city, Seattle recently announced it would issue $29 million in bonds to pay for public housing to produce and preserve over 500 affordable homes.

“The problem is here, now. It’s knocking on our doors,” Yerena says. “If we don’t do something, homelessness is going to get worse.”

Yerena’s research argues that if cities want to stem homelessness and create affordable neighborhoods, they are best off working from the ground up.

“We better realize that the people in charge are not going to be fighting for our rights or our benefits or our needs anytime soon. We have to advocate for ourselves and build a voice. That might involve you and me, but it might also involve a ton of people who don’t have time to do this or are in a much more needy situation.”

Yerena recognizes efforts to address homelessness exist in a broader context that must also involve social work and psychology, but she says, “What ultimately makes you homeless is the fact that you didn’t have a house. So, as housing experts, we all have a role.”

For her part, she’s starting with her students and currently preparing to teach a master’s course on movements and organizing that will work in connection with a homeless services provider in the community. Students will be able to get first-hand experience creating process evaluations that will one day help them run their own advocacy organizations or work as community planners who provide analysis to such groups.

For Yerena, it’s a question of, “How can we position our students to have an influential role in shaping their communities?”

She contends sitting next to a service provider who is a caseworker at a homeless shelter informs students’ perceptions of the issue of homelessness in ways simply reading media coverage cannot and hopes to publish on the effects of this type of experience on students’ development as advocates in their own right.

“These are the future residents, employers, employees, and leaders that are going to have to develop an opinion on the issue and play a role in shaping how our region responds,” she says. “I want their actions to be influenced by a strong level of familiarity and empathy.”

She argues adequate housing allows communities to thrive, enabling residents to become a stronger economic force in regions on the whole.

“Caring about housing for the disadvantaged or low-income populations is what makes our society sustainable.”

For someone who has known many homes, Yerena is now hoping to help make Tacoma and the surrounding corridor a more permanent one for all residents—herself included.

“My work is challenging in that the stakes are high, but that’s also what makes it good. If I thought it didn’t matter, it would be much harder to be motivated to do it.”

Anaid Yerena holds a B.Arch. from the Universidad de Monterrey and an M.U.R.P. and Ph.D. from University of California, Irvine. She also teaches Introduction to Urban Planning, Statistics for Urban Analysis, and Research Design.