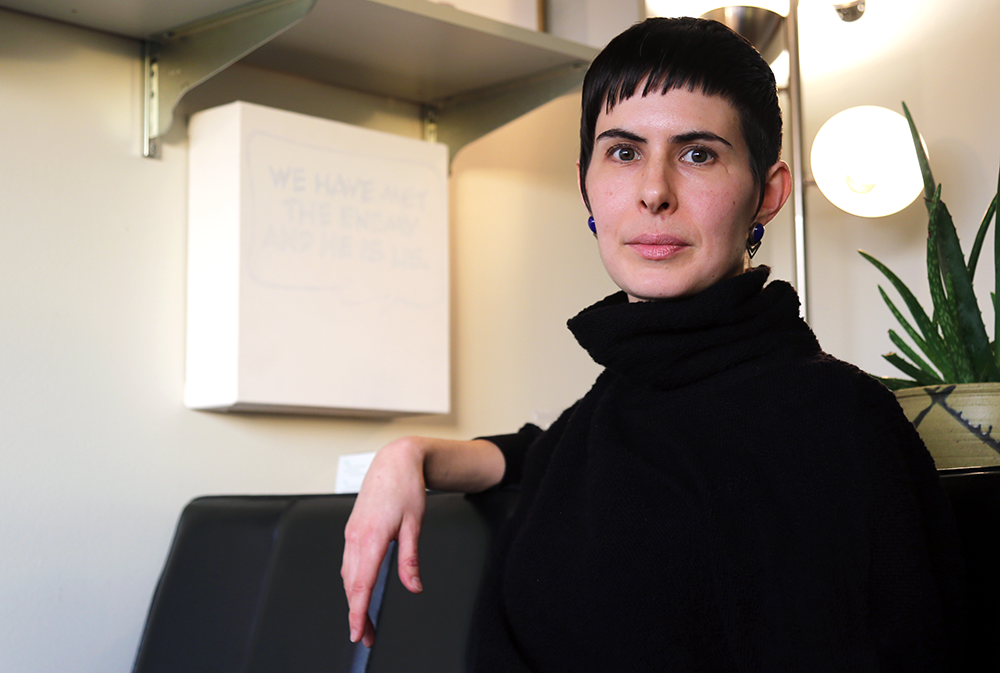 It’s a simple question with a complicated response.

The search for an answer is at the core of Clara Berridge’s research at the University of Washington’s School of Social Work. The assistant professor explores the social and ethical aspects of how healthcare technologies challenge, change, and enhance care relationships—especially for older adults.

“There are a lot of issues related to aging in a society where we don’t give people enough time to do family caregiving,” Berridge says. “We’re inevitably moving toward more technology use in care for people with disabilities and older adults.”

Increasingly, technology has aimed to fill, if not close, the care-giving gap in the form of a bevy of cameras, robots, and other monitoring equipment—even pills with sensors that can track when they are metabolized.

“The theory is that if we can track people’s behaviors and movements, then we can prevent problems and help people live at home longer,” Berridge says. She says she sees the motive as a noble one, but cautions that the introduction of new forms of monitoring and surveillance into care relationships raises ethical dilemmas and essential questions about how humans view and care for one another.

“It impacts everyone, no matter our age,” she says. “It’s important to look at who’s getting the monitoring technology, under what circumstances, and what the implications and motivations are for each of those specific technologies.”

She says there is a lot of hope placed in technology, but adds, “Technology is just a concept. We need to focus on specific technologies because they range so greatly.”

Berridge studies technologies that “differ dramatically in purpose and place of use.” Most of her work focuses on remote monitoring technologies such as GPS that track one’s location and in-home sensors intended to ease caregiving by tracking things like deviations from typical bathroom use, wake up time, and other activities in the home.

She also examines the phenomenon of families installing cameras in older adults’ rooms in care facilities as a means to identify and deter elder abuse. Berridge is the first to have conducted a survey of cameras in nursing home and assisted living resident rooms aimed at monitoring staff.

This month she received a grant in conjunction with a colleague at Cornell University’s School of Information to do a socio-legal policy analysis of laws in six states where nursing homes are prohibited from preventing a family member from placing a camera in a relation’s room. Their aim is to examine the bills, public comments, and records to see the degree to which different stakeholders—family members, visitors, staff, and resident older adults—are protected in law, with an eye to the question of how privacy rights are considered for each of these groups and their unique vulnerabilities.

“Understandably, the emphasis is on protecting the older adult from abuse,” Berridge says. “When I look at the records for these laws, I look for what research they are citing that shows this is effective or that this is desirable for the older adult and for the workers.”

The catch? There is little to no research.

“That’s why we’re digging into this,” she says. “Researchers of science, technology and society have challenged the notion that technology is value-neutral and separate from our social world. They argue that we are wrong to assume that technology designed by humans for human purposes could enter a social relationship without influencing the nature of that relationship and the people involved.”

These laws are passing, Berridge says, “Because of the advocacy work of organizations made up of family members of older adults who have experienced atrocious things in nursing homes. They’ve hidden a camera and caught abuse. They describe this in emotional testimony, and state legislators pass these laws.”

“We think there should be more research on this to really understand the issues and implications more broadly.”

OF AUTOMATA AND AUTONOMY

She sees it as a first step in exploring what is, ironically, a relatively young field at the intersection of critical gerontology, bioethics, and healthcare technology. The example of the surveillance camera placed at the foot of the bed clearly packs a Pandora’s box of ethical and social implications, but so do other technologies she studies.

“I’m doing a lot of work with social workers and older adults who’ve used remote monitoring technologies such as activity sensors in practice,” she says, adding that a social work approach’s strength is understanding problems in a whole context—the social context, the policy context, the service context.

“Our field engages people’s daily realities, their pain and struggles, and how they interact with systems,” she says. “It’s from that grounded knowledge that we can ask the most creative and often critical questions about interventions.”

Berridge argues that ethical use of these technologies requires that we take seriously the ways in which older adults choose to use, reject, resist or reshape them. This study of the use and “misuse” of such technology, she is finding, can often help identify broader systemic problems that otherwise go unnoticed.

“Oftentimes we look to technology to address problems we don’t understand or aren’t able to easily invest resources in,” she says. “The idea that more monitoring technology is the solution when it is often a Band-Aid on underlying problems means that it may distract from alternative approaches”

Her critique isn’t focused on technologies but rather, reductionist representations of older adults, their needs, and aspirations.

Back to the example of family members mounting cameras in nursing home beds. A primary motive for doing so is a suspicion of abuse or neglect—which is a problem, in part, Berridge argues, because, “people are paid very poorly for elder care.”

“It’s not considered a desirable job. It’s socially devalued. Usually it’s immigrant women of color who are doing this work, trying to raise families on this salary and not necessarily getting a lot of training,” she says. “It’s hard work, and the staffing levels are low, so they’re being stretched and often working multiple jobs.”

Keeping the care worker in focus, as well as the older adult, is at the heart of Berridge’s work.

“Their futures, well-being, and social status are intertwined,” she says. “We set up long-term care for failure, because we don’t compensate people well for care work and we don’t organize work places to accommodate family care responsibilities.”

“Something has to give.”

US Bureau of Labor Statistics projects that over the next decade, personal care aides, registered nurses, home health aides, and nursing assistants will be among the most in-demand jobs. But as emotional labor is increasingly given over to devices and technology, the effect is potentially twofold.

On a micro level, labor risks being compartmentalized to a point that there’s a loss of holistic awareness on the part of caregivers, risking the alienation or mismanagement of older adults. On a macro level, as technology outstrips the need for workers, emotional labor is devalued to an even greater degree, which only risks compounding existing social problems within caregiving networks, such as abuse, neglect, and high turnover and attrition.

Left unchecked and unexamined, concepts of care get corroded. And without sound assessment and inquiry of those changes, social norms and networks risk warping along with it.

“How do we shape that so we’re not decreasing human interaction? I think that that’s a huge challenge,” Berridge says. “The interaction has the potential to be powerful and beautiful and enhance your quality of life—and if it’s not there, things could go very poorly.”

“In the end,” she says, “Who cares for you may be all that’s left of your social world.”

It’s an essential question: how do we value care? And are those values changing? The answer, Berridge posits, can be found in who provides it and how.

With an aging population, care-workers should be valued, but market conditions—hastened on by technology—would have it otherwise.

“The problem is often framed as one of resource restriction,” Berridge says. “We don’t have enough people; we don’t have enough money. But many of these problems that I study could be addressed if we had the political and economic will to invest in long-term care—actually adequately training, valuing and paying people who provide care.”

“Then people could have viable careers in this critical line of work.”

Berridge says people are often shocked when social workers explain the temporal and financial sacrifice that goes into elder care.

“If they truly understood how little is actually provided for and how much is going to come out of pocket and what it requires, I think we would have more support for a public long-term care system.”

With the symbiotic relationship between caregivers and care-seekers so evident, solutions might emerge if only more cared to take up the cause. But more don’t, which is part of the reason why Berridge decided to get involved.

“I’ve always been interested in the sticky, complex issues—the tensions between care and control and issues of autonomy and privacy,” she says.

EVERYTHING OLD IS NEW AGAIN

Born in a small village in Alaska, Berridge later moved to the Midwest, where her parents had grown up. She says she was first inspired to begin investigating aging at the age of eight, when her father took her to visit an octogenarian neighbor who’d run the store in his Michigan hometown.

“My dad would take me to visit this woman who lived on this property in the middle of nowhere,” Berridge says. “We would drive out there, pull up, and the woman would come out with a bat, swinging. I would be really scared.”

She says her father would get out of the car, greet the neighbor by name (she was legally blind). Upon recognizing his voice, she would drop the bat and give him a hug. Then they’d all get out of the van and her step-mother would distract her with a game while her father, who worked his way through college as an orderly in a nursing home, helped clean her dirt-floor house.

“They would just take care of her,” Berridge says. “He would talk to me about her history, resilience, and difficult things that shaped who she was today. Through my dad’s eyes I was able to see her humanity and her story and she was no longer a scary old person.”

She says all of those strong experiences imprinted her with an interest in social justice issues surround the status of people in old age that she carried with her to the UW, first to obtain her master’s in Social Work in 2006, and now, returning this past September as an assistant professor. For one who studies privacy and isolation in old age, Berridge says she could not feel more connected at the UW.

“It’s fun as a new faculty member to work with doctoral students and find that mutually beneficial relationship,” she says of her two research assistants. “The interdisciplinary collaboration at UW is stimulating.”

Berridge credits Nancy Hooyman, Professor and Dean Emeritus at the School of Social Work, as a mentor and one of the reasons she was initially drawn to the UW.

Berridge says the most challenging part of her work is the nascent state of data collection and the need to make connections where none otherwise exist.

“I interview state Medicaid waiver directors,” she says, “I’m asking them, ‘Are you tracking who is using GPS, sensors and cameras as a covered service? How is this overseen?’” Eventually she will be able to link Medicaid records to older adults who are interacting with technologies.

It’s sure to take time and hard work, but luckily for Berridge and the untold older adults who stand to benefit from a closer analysis of their rights and preferences, she’s only just arrived.