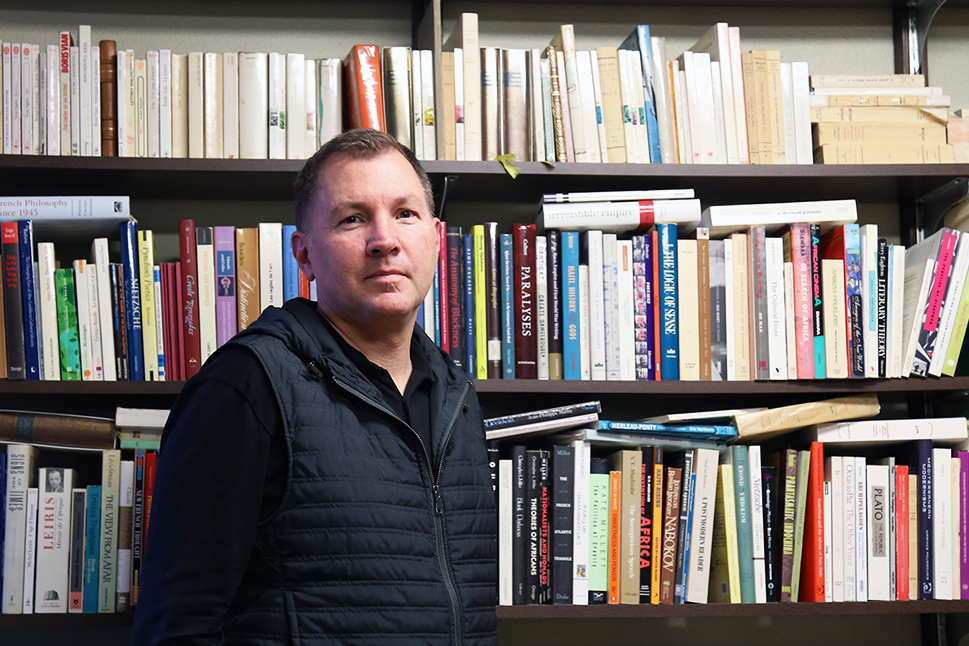 The study of literature can be wet work. Richard Watts teaches the course that proves it.

In Water Crisis in Literature & Cinema, Watts, who serves as associate professor and chair of French and Italian Studies, addresses the cultural significance of water and its changing meaning as societies grow more conscious of risks posed by pollution, scarcity, overabundance, and infrastructure. In a year that has witnessed crises of lead-poisoned water in Flint, Michigan and protests over water rights in Standing Rock, North Dakota, it’s no wonder students from all disciplines flocked to register under the 200-level course’s dual French and Comparative History of Ideas prefix this fall.

“We are deeply troubled by these stories of the diversion of water from one population to another in the name of making money,” Watts says. Because water sources are often hidden out of sight, people often form contentious, even conspiratorial narratives around water problems, he says, before adding that, “There are conspiracies in certain cases.”

The course maps water’s changing cultural meanings from its mythological roots (the ancient Greeks viewed water as the spring of memory) to its context in the modern world (the UN estimates that by 2025, as many as 1.8 billion people will be living in regions with absolute water scarcity). Ranging from the Book of Exodus and passages in the Qu’ran to contemporary Chinese cinema and Roman Polanski’s Chinatown, the syllabus spans oceans—and eons.

Watts grew up in Los Angeles in the 1970s. His father was a French teacher. His mother was French. He recalls learning the language “a very traditional way” — by reading the classics of the French canon.

At Watts’ Padelford Hall office, books line opposing walls on shelves that reach from floor to ceiling. Editions that belonged to his father occupy a shelf second from the top, just above eye level.

“The material culture of books was very much a part of growing up,” Watts says. “At the same time, so was an anxiety about water.”

During Watts’ childhood in California, the state experienced some of the driest years on record, including an historic drought in 1976 and 1977 that saw his family and others implementing drastic water-saving measures as part of everyday life.

“We took timed showers,” Watts says. “You got three minutes. We had a bucket in the shower so you could use whatever water that ran off to water plants.”

Extended stays in France to visit his mother’s family and for his father’s sabbaticals offered Watts some respite from the parched West, as well as time for further literary study, which he continued as an undergraduate at UC Santa Barbara and later at Yale, where he received his Ph.D.

During this time, he traveled throughout North Africa and the Caribbean, working on what would become his first book, Packaging Post/Coloniality, an in-depth study of how 20th century colonial and post-colonial Francophone literature crossed borders, with a particular focus on how those texts were framed, packaged, and presented to a largely French reading public. It was near the end of an intensive 15-month stint along the left bank of the Seine analyzing works at the National Library of France that water came rushing back into his world.

In the works he was examining, Watts began noticing competing discourses on the idea of water—both its cultural meaning and how it should be used.

“This conflict of symbol and meaning aligned with a conflict regarding who controls the water,” he says. “What I began to realize was that—as with every other aspect of the colonial enterprise—the French were very good at transmitting their notions [of water] and erasing other notions as they encountered them.”

Just as the publishing houses of Paris sought to influence the dialogue surrounding colonial and post-colonial works of literature from places like the Maghreb, West Africa, and the Caribbean, the country’s colonial administration acted out a similar tendency toward control in their approach to water and the environment in territories and former territories abroad.

“In France, there’s a long history of the commodification and private control of water,” Watts says. “This butts up against the importance of water in certain spiritual traditions in the places France colonized and a desire for a sense of ownership over one’s own resources.”

A pioneer in the global bottled water trade, France has been a leader in what Watts calls “water delivery services” ever since Napoleon III founded the Compagnie générale des eaux in the mid-19th century.

“The two largest water privatization firms in the world are French,” Watts says. “This is not coincidental.”

To this day, problems surrounding the use of water, its pollution, water shortages, or external control are often viewed in former French colonies as a legacy of French colonialism or as a result of continuing French neocolonial activity—“a sort of extension,” Watts says, “of what one saw early in the colonial period with the naked control of natural resources.”

“There’s a lingering sense in many former colonies that they are still dispossessed of this substance essential to life and, by extension, of a great variety of cultural practices connected to it.”

Even before his book was complete, Watts began compiling water-related case studies drawn from literature spanning the former French colonial world. Throughout his later years at Tulane University in New Orleans, where, he jibes, “the problem of water is too much, not too little,” a central question lingered in his mind: “To what extent does this cultural clash around water connect to forces of water privatization in the world today?”

In 2009, Watts arrived at the University of Washington in search of the answer.

Watts immediately saw the University of Washington as a place where the environmental humanities could thrive.

“I knew there were already a number of people working on environmental issues through the lenses of the arts, the humanities, the humanistic social sciences,” he says, adding that the Comparative History of Ideas program and Simpson Center for the Humanities were instrumental in facilitating dialogues. He calls them “important nodes for those of us who may have been trained in a specific discipline, but whose research has evolved to cross disciplinary boundaries.”

Cross disciplines he did.

Next summer, alongside urban landscape historian Thalsa Way and urban ecologist Ken Yocom, Watts will spearhead City/Nature: Urban Environmental Humanities, a new summer institute made possible by a grant from The National Endowment for the Humanities. The institute plans to welcome a cohort of 25 faculty from colleges and universities nationwide with the aim of using Seattle’s complex environmental history as a backdrop to address questions about the environment in the broader context of urban development and social justice.

“We have to stop thinking about nature as this space outside; that nature is somehow what lies beyond the edges of the city behind the gates of a national park,” Watts says.

As part of this effort “to rethink the interface of nature in the city,” Watts and his colleagues will lead a field excursion to Brightwater Sewage Treatment Plant—a fixture of his Water Crisis course.

Sewage might not seem the stuff of which myths are made, but Brightwater is unique. The Woodinville wastewater treatment facility features $1.3 million dollars of installed art—a result of King County’s stipulation that any large structural project must devote 1% of its budget to the arts.

“One of the objectives of the course is to think about how all aspects of the water cycle have an aesthetic dimension,” Watts says. “The water coming into Brightwater has been fouled. There may come a time when, in some form or another, water coming out of the treatment plant will be drinking water.”

Watts views the artwork at Brightwater as part of a broader move by public utilities in Washington to attract and educate the public; a means to re-enchant people with something that’s often taken for granted and which, if global trends persist, will keep growing increasingly scarce. For Watts, the environmental humanities’ role in mediating the world’s ongoing water crises future boils down to one question.

“How do you make water palpable—and potable?”

Richard Watts has a B.A. in French and Economics from UC Santa Barbara and an M.A., M.Phil, and Ph.D. in French from Yale University. He followed his first book, Packaging Post/Coloniality: The Manufacture of Literary Identity in the Francophone World, with the book-length project, Water Narratives: Imagining Global Environmental Change in the Francophone Post/Colonial World. The City/Nature: Urban Environmental Humanities institute will run from June 26 to July 14, 2017.