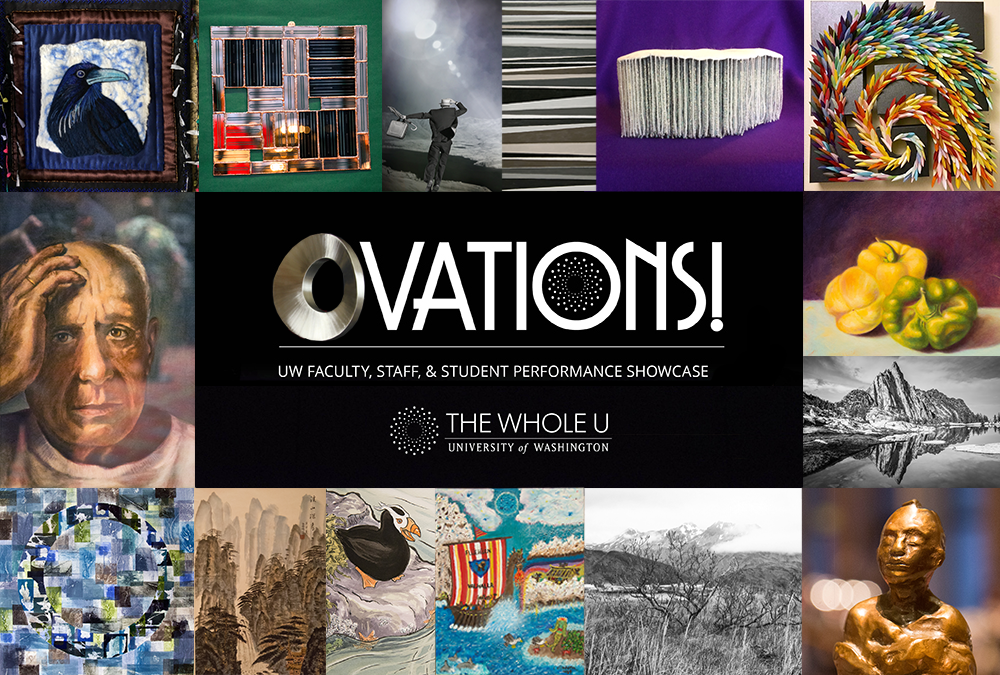 Last week, we recapped the diverse talents who performed on-stage November 20 at Ovations. But just a few feet beyond the doors to Meany Theater, an equally impressive exhibition was underway. Displayed in the lobby of Meany Hall were works by 16 faculty and staff artists, ranging from carefully-crafted wool paintings to dreamscape photographs and everything in between. Holiday lights and the hubbub of the over 800 in attendance were reflected in mirrored glasswork, while transcendent sculptures and traditional paintings held viewers rapt with intricate detail. But don’t take our word for it. See for yourself in this photo gallery of the afternoon’s festivities. 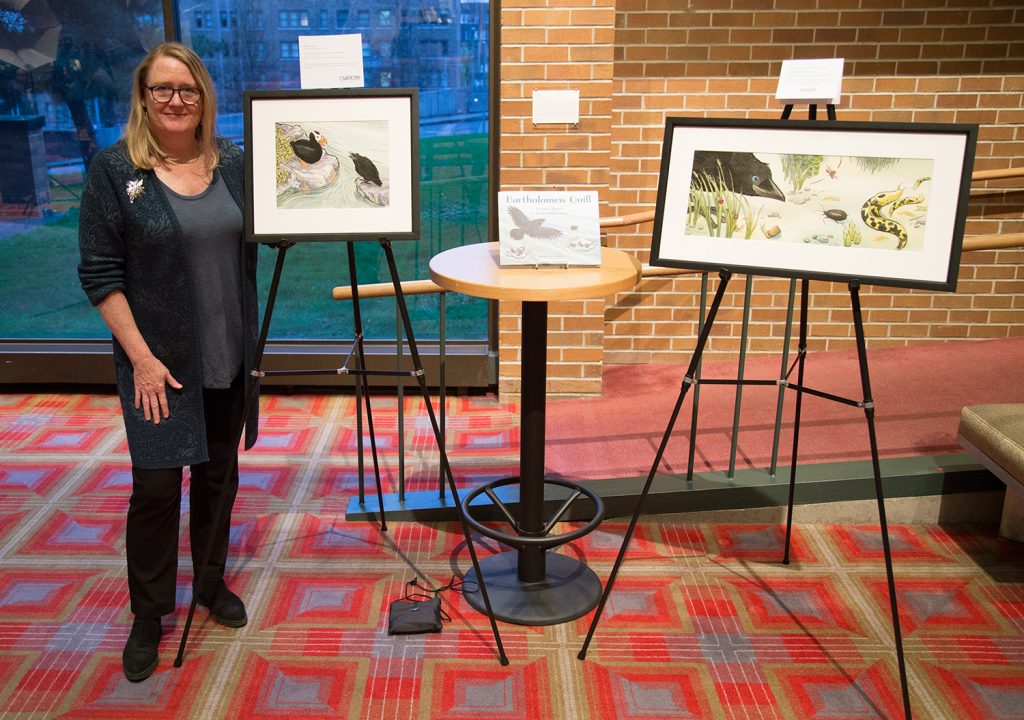 Dana Arnim poses beside illustrations she created for the children’s book, “Bartholomew Quill: A Crow’s Quest to Know Who’s Who,” published this past April. A program coordinator in the Department of Psychology, Arnim is involved in the Seattle chapter of the Society of Children’s Book Writers and Illustrators, the international professional organization for writers and illustrators of children’s literature.

This 14” x 27” image extends across two pages of the book and is made using watercolor and black ink. 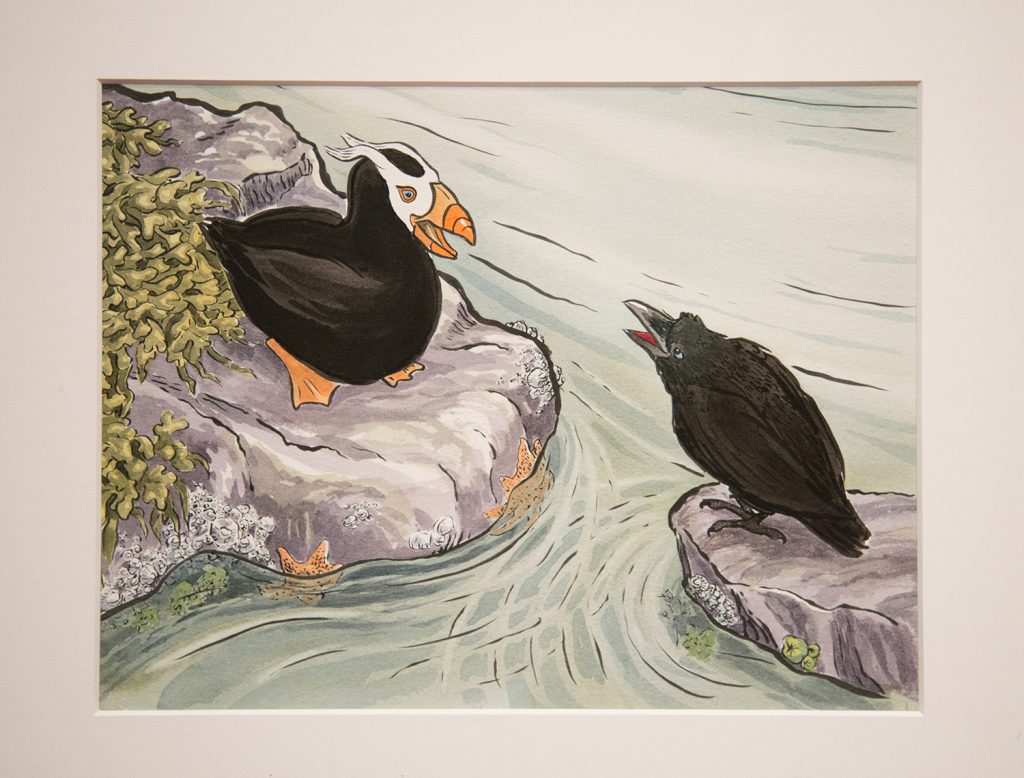 Her illustrations, including this 14″ x 17″ vignette, have drawn praise from within the UW scientific community for their accuracy, which lends the book—and the animals within it—a naturalistic depth of character.

An employee in Mental Health & Addictions at Harborview Medical Center, CAT says she paints when she finds the time. But what she finds when she paints? Fantastic, imaginative worlds lit up in bright color. Left: “Fluehuen Valhalla” (20″ x 16″), oil on canvas; right: “The Island of Ratillia and Furbone Island” (16″ x 20″), acrylic and pen. 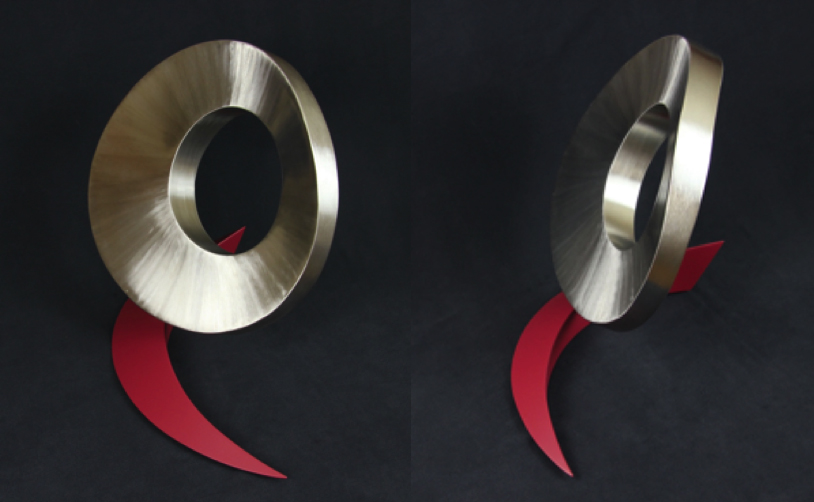 The artistic possibilities of metal intrigued Dale Durran ever since he took a welding class as an undergraduate. Now a professor of Atmospheric Sciences, Durran pursues metalwork and sculpture in his free time. This piece, Nova Red, is roughly 17” x 10” x 17” and made from stainless and painted mild-steel, which he calls “that luminous backbone of modern civilization.” 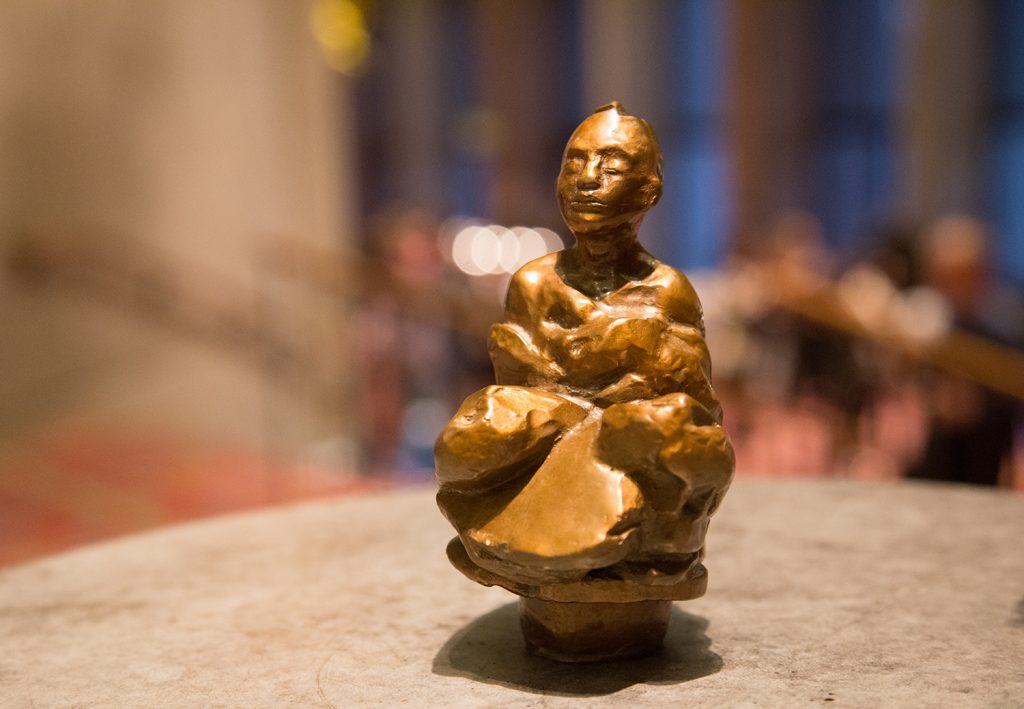 Jan Kinney thinks out of the box to create these “goddess boxes,” dedicated to the divine feminine. Kinney recently took a new job as a Curriculum Design Specialist after over 20 years as an instructional designer at UWEO (now UW Continuum College), but she’s been making art since childhood. She says these pieces are intended to “sacralize and mythologize my own experiences or those of others.” Left: “Why Did the Cailleach Cross the Road?” made using white and gray silk, beads, quilting (8″ long, 4-1/2″ wide, 3.25″ high); Center and right: “Hecate’s Day Spa” made using black and red silk, black beads, crow feathers, balsa wood (7-1/4″ long, 12″ wide, 9.75″ high). 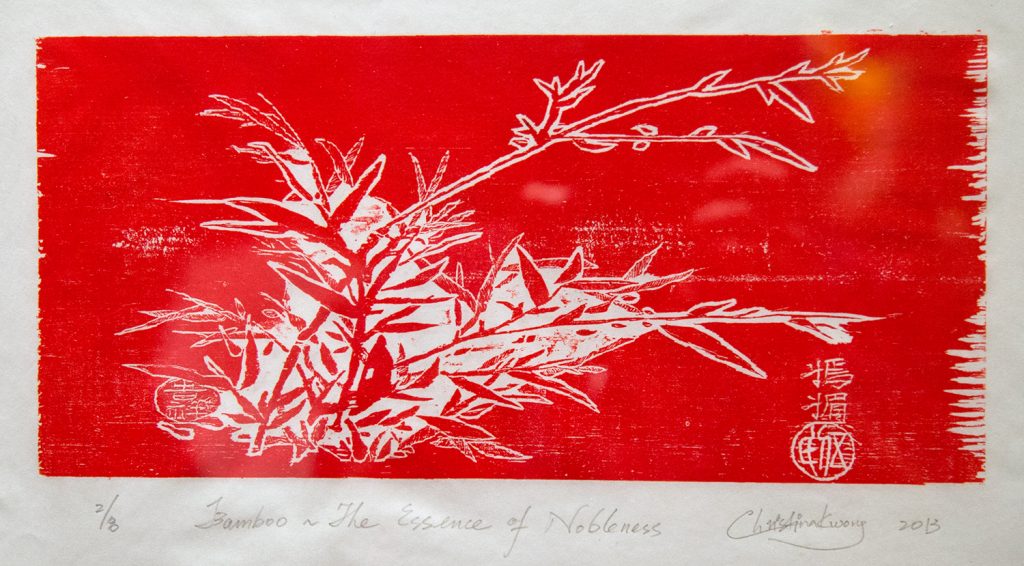 Chris Kwong, the program coordinator for the Office of Admissions at the Bothell campus, works in many mediums, as evidenced by this dashing 16″ x 20″ wood carving print, “Essence of Nobleness.” 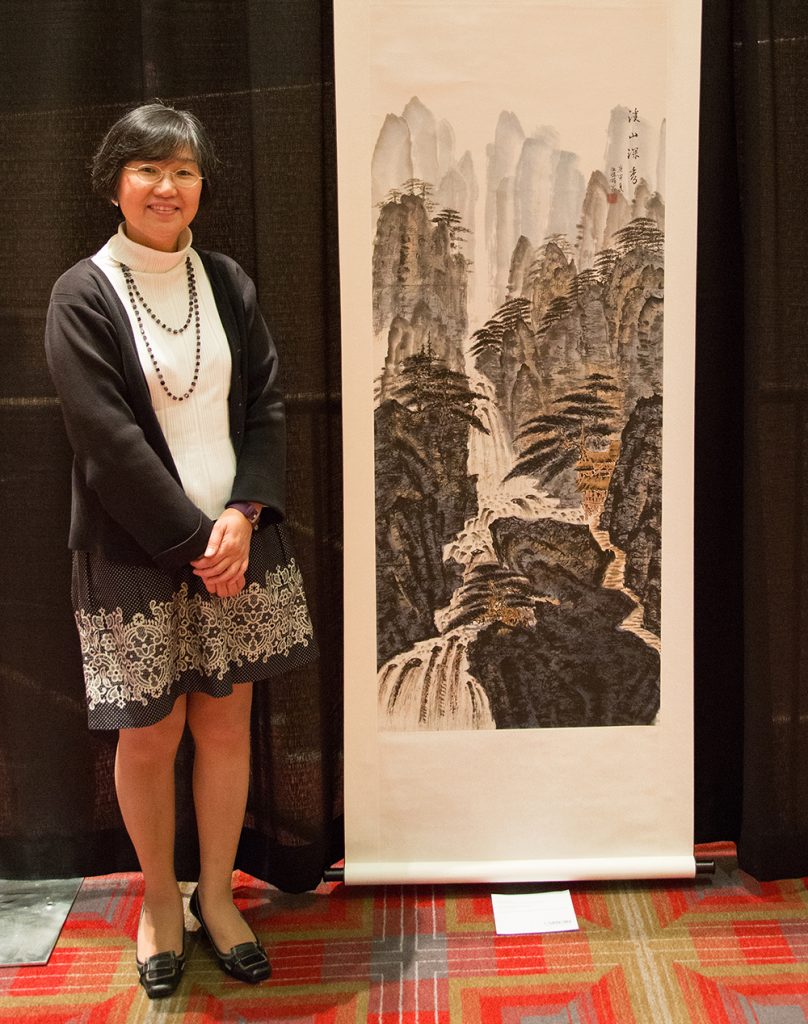 Here, Chris Kwong stands beside her 90″ high x 29″ wide landscape, created using the sumi-e technique—a style of painting that employs washes of black ink and which dates back centuries. Kwong calls the number of possibilities that result from mixing water and color “miraculous.”

During the day, Grace Lee provides fiscal and administrative support to a group of research scientists in the Department of Pharmaceutics, but in the evening and on weekends, she creates vibrant oil still lifes. From left to right: “Summer” (12″ x 16″), oil on canvas; “Peppers” (16″ x 20″), oil on canvas. 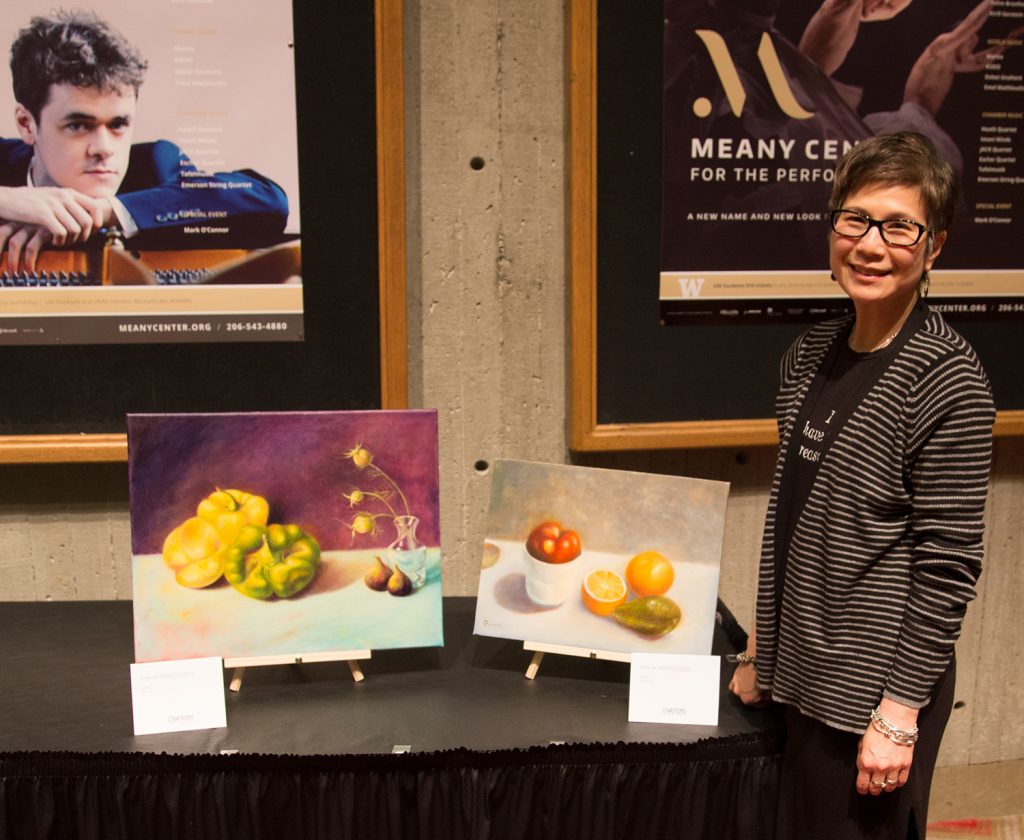 Grace Lee stands beside her colorful creations, which have attracted the gaze of a curious onlooker in the form of a poster for an upcoming performance. We love it when artists take an interest in each other’s work! 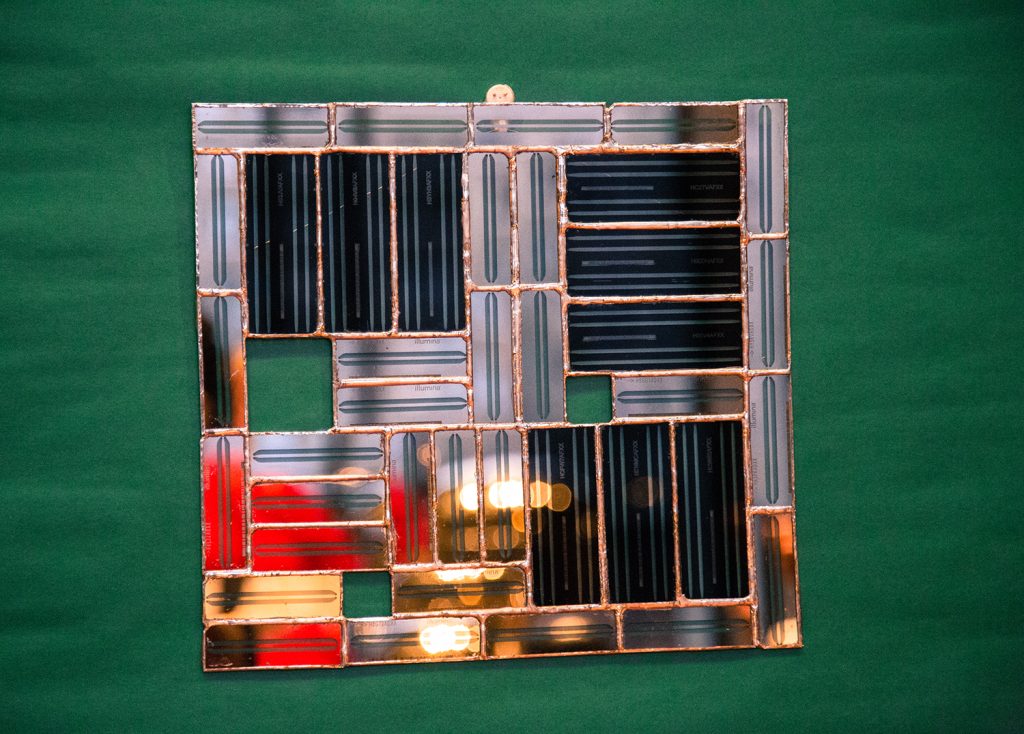 Science meets art as one of Robert Livingston’s glass panels reflects the lights of the season. Formed in patterns “to variously reflect ambient light and mirror a constantly changing perspective,” each panel is made of spent DNA sequencing “flow cells,” which were previously used to identify cancer mutations.

A clinical laboratory supervisor for the Genetics and Solid Tumors lab in the Department of Laboratory Medicine at the UW Medical Center, Livingston and his coworkers use Next Generation DNA Sequencing to identify mutations in cancer genes. Livingston’s work in the lab inspired him to create “Tree of Life,” this series of three panels. Made in the style of Frank Lloyd Wright’s art glass, the panels currently can be found on display in the Lab Medicine Genetics suite in the Health Sciences Building, Room RR851.

A medical coder in the Radiology department, Connie Lobo creates art that reflects her background knitting, crocheting, embroidering, as well as making baskets and beaded jewelry. But it’s through a process called 2-D needle felting that she weaves all those skills together. This piece, “Prayer Flags – Back to the Garden,” features a set of 9.5” x 8” flags strung on piece of garden twine. She says “the flags represent Transformation, Rejuvenation, Discovery, Nurture and Inner Peace.” 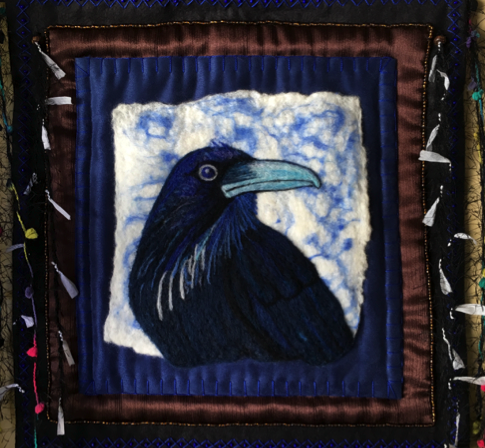 Another fine example of what is possible in the realm of fibre art, Lobo’s “The Raven” (8.5″ wide by 17.5″ long) was created as an “art quilt” or wall hanging and is framed on fabric embellished with beads and embroidery and yarn.

Mark Morgan isn’t a magician, but take one look at his photographs and you would be forgiven for thinking he is. From left to right, “Late For The Rapture” (23” wide x 31” tall), “I Keep Waiting For The Wrong Things” (23” wide x 31” tall), and “Every Morning It’s Just The Same Damn Commute” (29” wide x 40” tall) were produced through a wholly original process using cameras affixed to kites, digital manipulation, watercolor painting, and infrared imagery. A research engineer working at the Washington Nanofabrication Facility, Morgan calls his style “Unexpected Photography.” We don’t know what to expect from him next, but are sure it won’t fail to ignite the imagination. 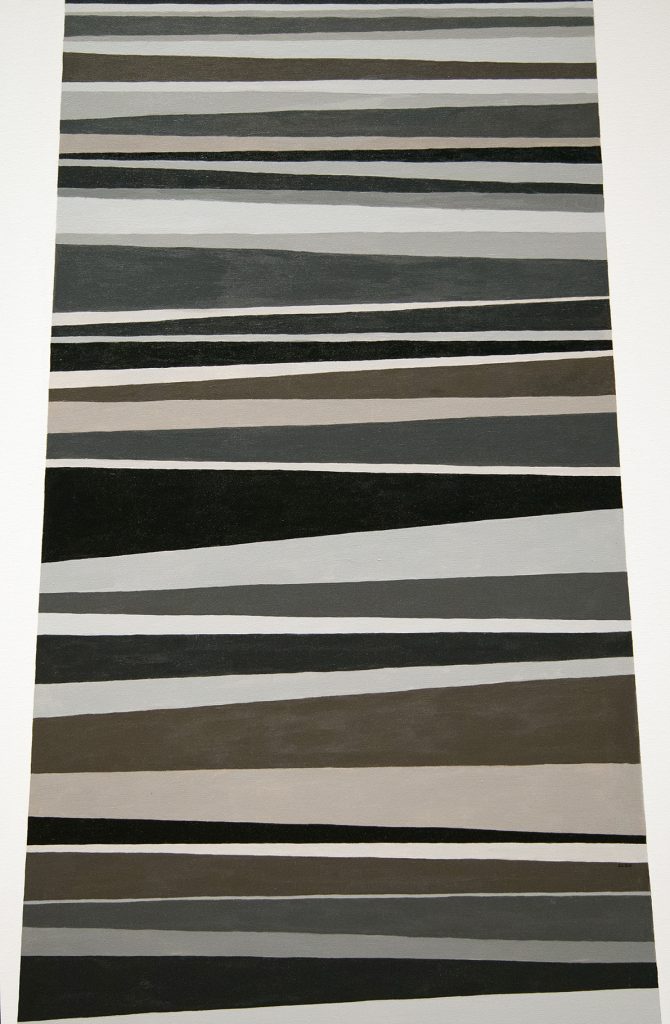 Sarah Guthrie’s “The Burke” (24” wide x 36″ tall) is proof that art can be found in our everyday surroundings. Part of her series, “Seattle: A Love Story,” the piece was inspired from a scene she saw on her bicycle commute to the UW in early spring along the Burke Gilman Trail. “It was at the time of year when the trees are still bare and the light was at such an angle as to cause sharp shadows and contrasts across the Burke Gilman trail, right near the IMA,” says Guthrie, who serves as director of communications for the UW School of Pharmacy. “It was so stunning a scene, I stopped my bike and took a reference photo right away. Later that day, I sketched the piece in my art notebook that I carry with me everywhere I go and then went to the canvas.”

It has been said, as mere metaphor, that the most dedicated artists will travel to the ends of the earth for their craft. But Eva Hansen literally did. Hansen, the evening lead for Client Support Services in the lab at the UW Medical Center, shot these works on Ilford black and white film with a Nikon FE camera on a recent trip to Dutch Harbor on Amaknak Island in Alaska’s Aleutians. Hansen says she took the trip “with the express purpose of being a tourist in a place people rarely go for the sake of tourism.” She calls the series of 11″ x 14″ photographic prints, “God Forsaken: Finding Myself at the Edge of the World.” 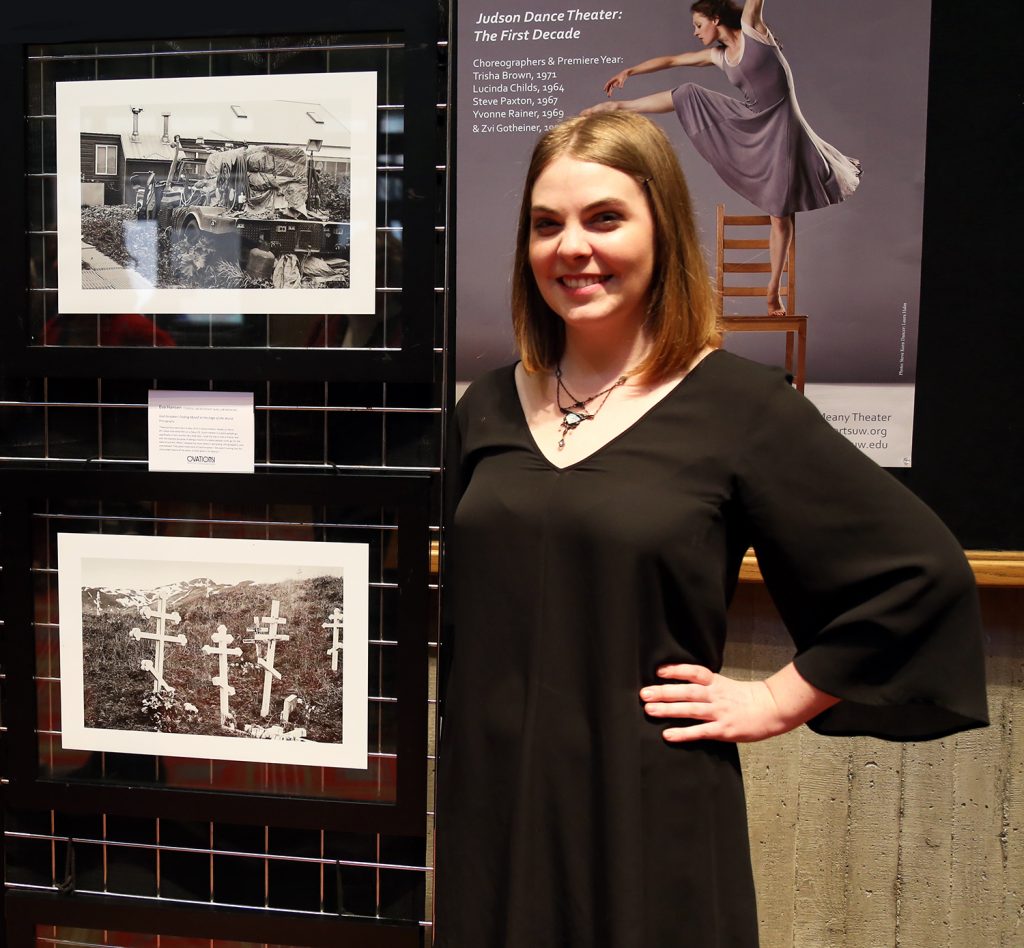 Photographer Eva Hansen stands beside two of her photographs from the series, “God Forsaken: Finding Myself at the Edge of the World.” 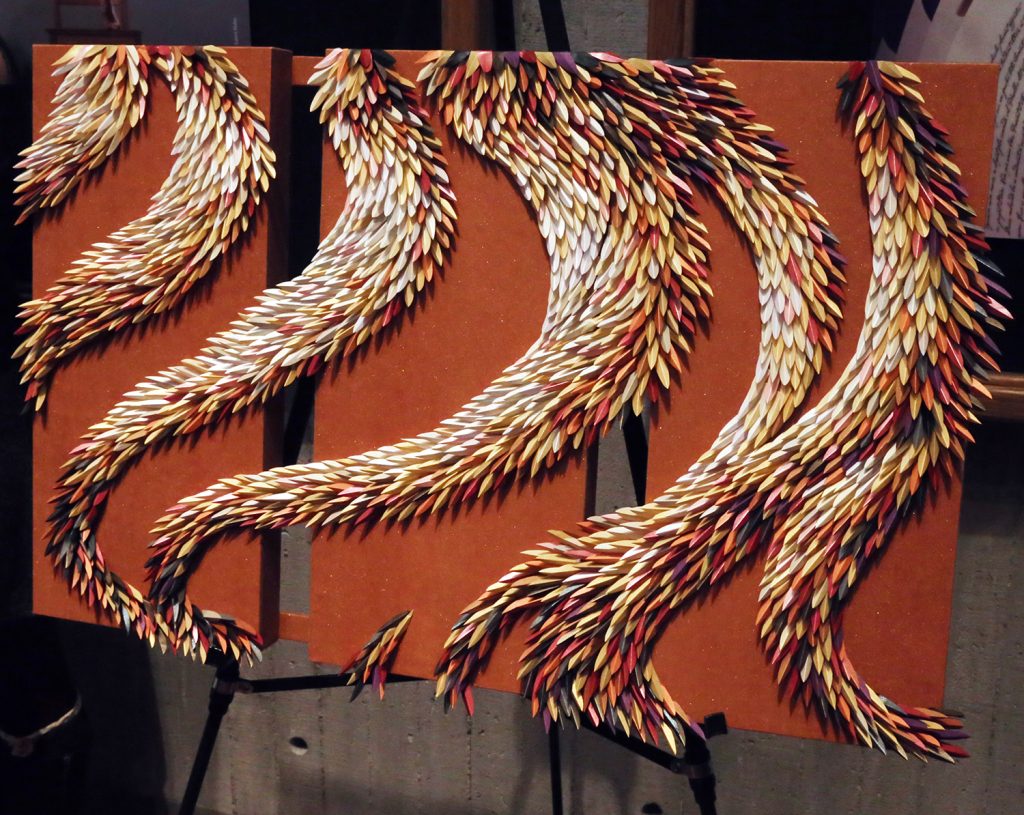 This paper sculpture constructed on three wooden panels comes at the viewer in a bold flourish of color. “Typically I hang it at an angle which increases the size,” says its creator, Melissa Pritchard, an academic adviser in the Civil and Environmental Engineering program. The piece captures movement, but is also moving. Each of Pritchard’s pieces are inspired by real people whom she knows who has had or has cancer. “I myself am a survivor and I use this medium to commemorate the struggles those in my community have gone through,” she says. “I try to capture the spirit of my friends in some way within the colors, patterns, and textures.” 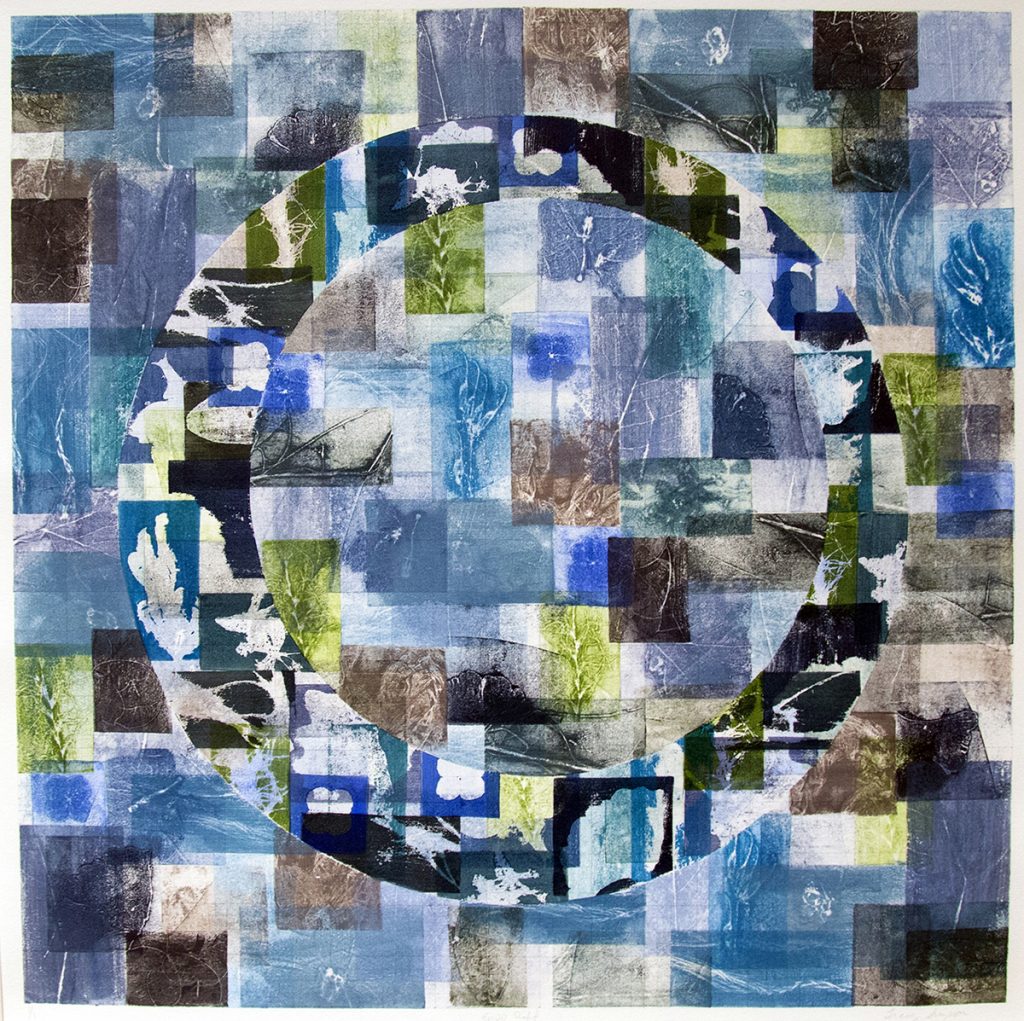 This 19″ x 19″ monotype print is titled “Enso Riff” and was created by Tracy Simpson, an associate professor in the Psychiatry and Behavioral Sciences Department. Simpson says the work is her attempt to couple ensō practice with a “slow, painstaking manual off-set printing process, also known as potato printing.” Drawing ensō (or circles) is a discipline of Japanese ink painting with roots in Buddhist practice. With its many textured layers, the work is at once peaceful and sweeping in such a way as to echo the Pacific Northwest itself. 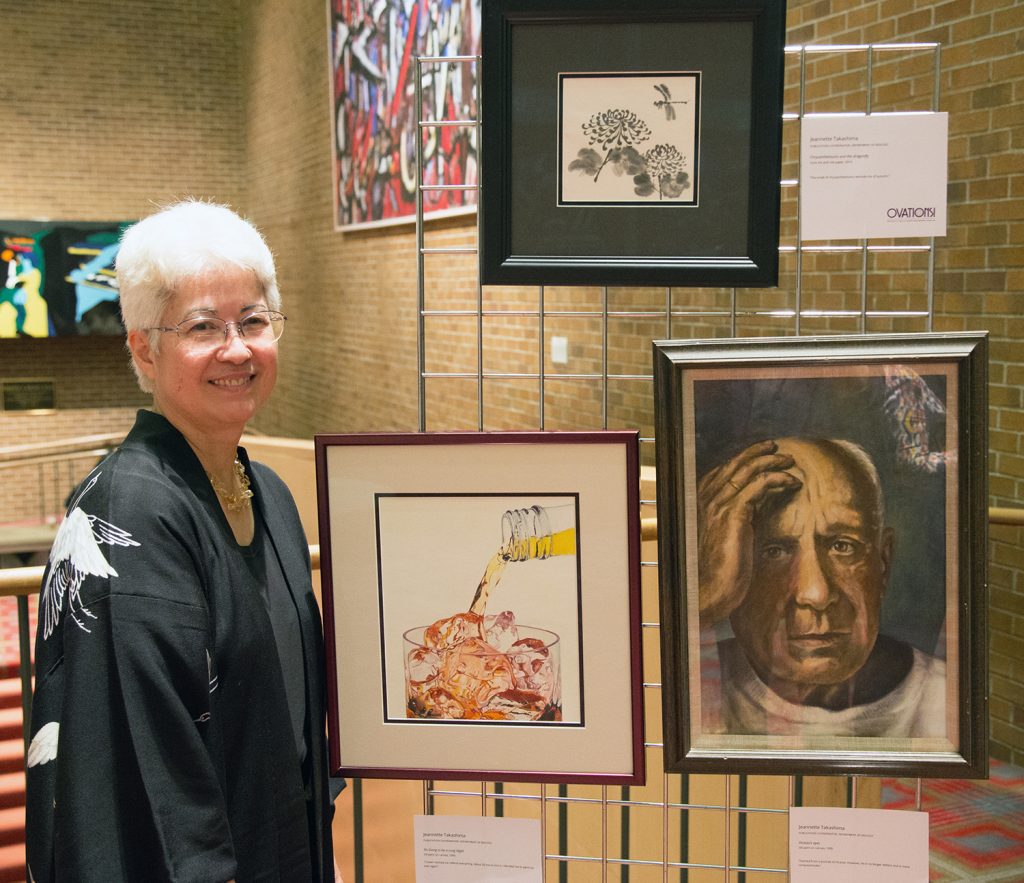 A remarkably versatile artist working in multiple mediums, Jeannette Takashima, publication coordinator for the Department of Biology, poses with three pieces of her artwork in the lobby of Meany Hall. 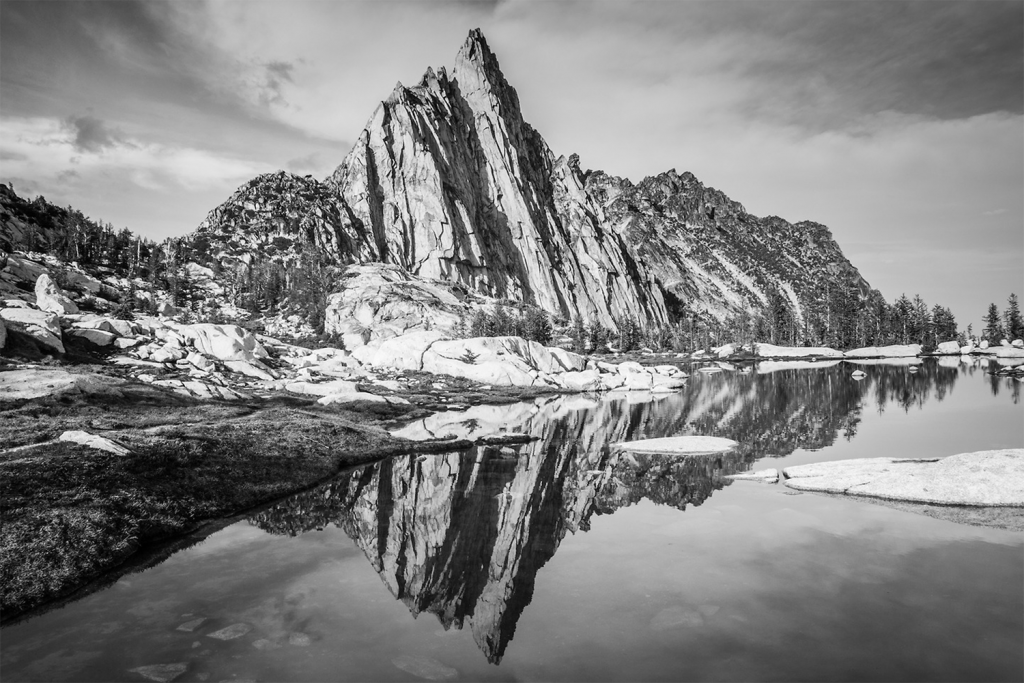 Soaring from the Alpine Lakes Wilderness within Washington’s Wenatchee National Forest, Prusik Peak draws hikers and shutterbugs from near and far. But we think Erik Turner’s photograph of the peak and its reflection in nearby Gnome Tarn offers double the usual thrills. It’s no wonder Turner and his photography recently received recognition from National Geographic. The energy engineer with Facility Services says he hopes his photography will “inspire others to work hard to seek out the stillness and power of the natural world.” We’d argue that if you can’t make it to the Enchantments region of the Cascades to see Prusik’s jagged pinnacle yourself, Turner’s work is definitely the next best thing.

In all, it was an inspiring afternoon. To learn more about the artists and the process behind their work, check out our “Meet the Artists” profiles here and here. Have an artistic talent you’d like to share? Ovations 2017 will be here before you know it, featuring all-new work from our talented community. Until then, keep creating!