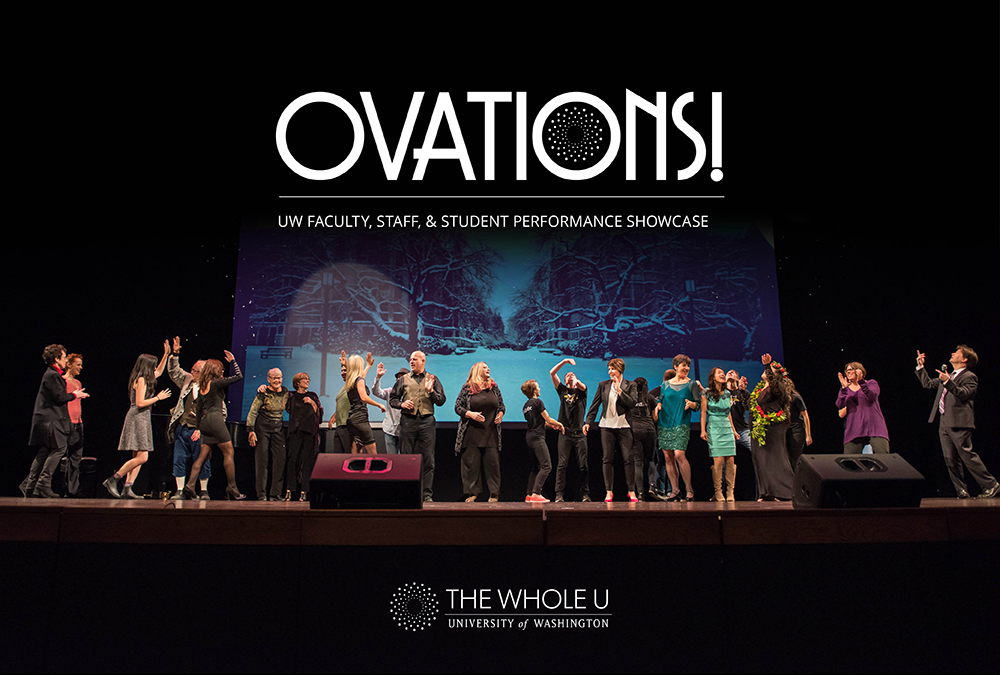 A late autumn rain did little to dampen spirits of the more than 800 who gathered at Meany Theater, Sunday, November 20, to take in a pop-up art gallery before the curtain went up on a show featuring 15 acts. Among the performers: sensational singers, self-directed students, and deft dancers; educators of all stripes and disciples of all disciplines. Now in its third year, Ovations! is where the manifold interests and artistic pursuits of the UW community converge for one afternoon in a show featuring artwork and performances by staff, students, and faculty.

Shortly after 1 pm, the theater doors opened, guests filed into their seats and, with a ruffle of red velvet, the show got underway. By the time it was all over, the artists succeeded in bringing down the house—brightening a drizzly dusk with an illuminating display of the talent on call—sometimes quite literally—across the University of Washington.

Check out the photos and links below for a complete act-by-act recap of an unforgettable afternoon and stay tuned for a gallery of artwork from the show along with full-length video of performances. 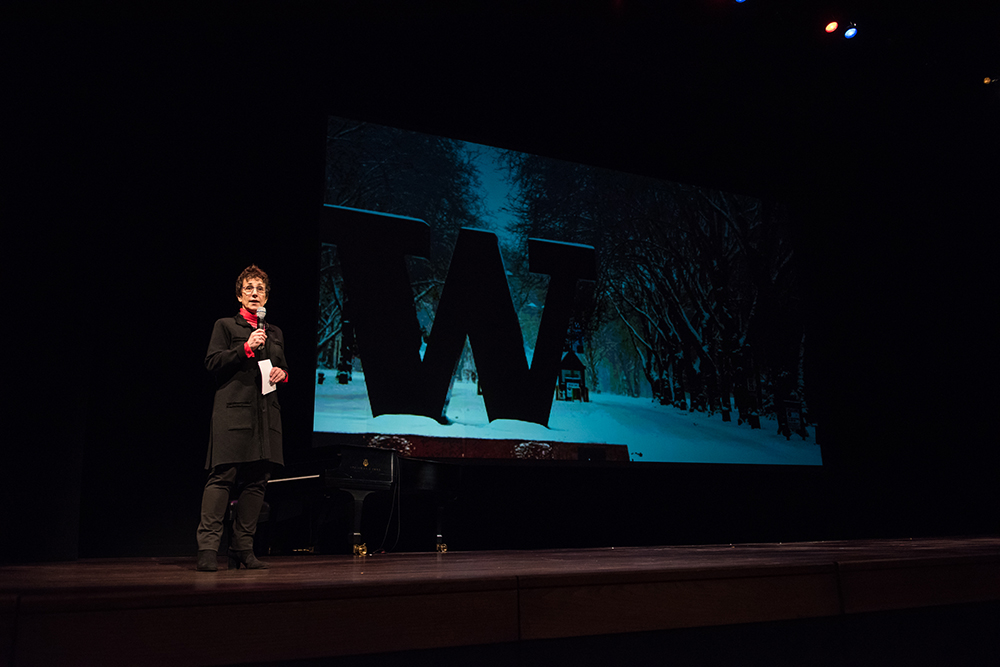 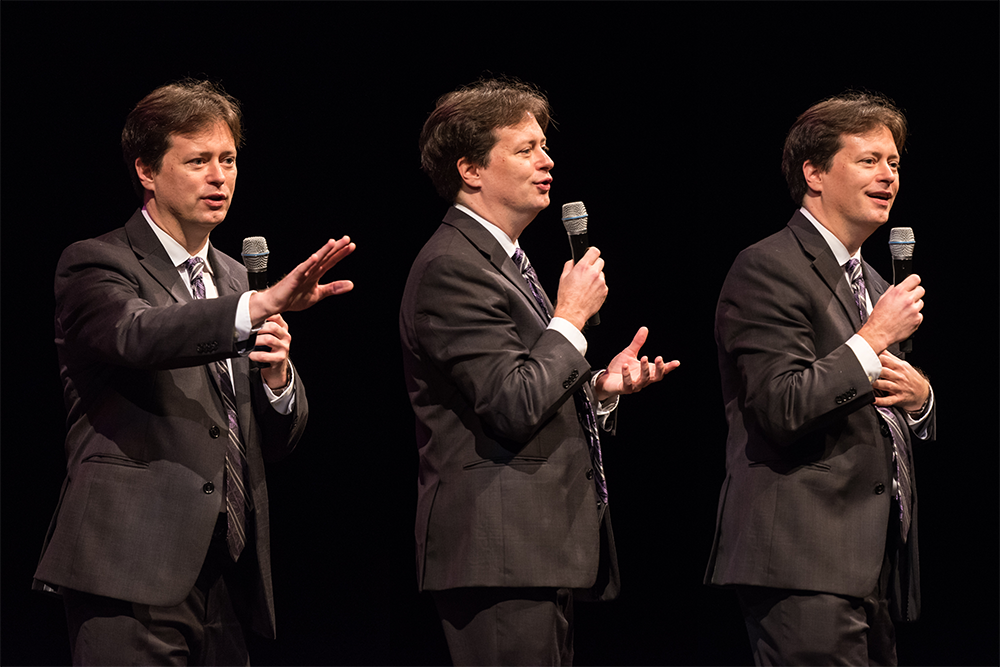 The show got off to a hot start. As part of his first magic trick, Host Jim Earnshaw explained he’d recently been dreaming about cards trapped in a burning hotel. Flipping an sealed pack of cards to the audience, he asked them at random to help him finish the dream and determine which card escaped the conflagration first. Once the card was determined, Earnshaw asked an audience member to hand him back the loose deck, which, upon receiving it, he instantly transformed to burnt bits. Then, before the charred cards even floated to the floor, he produced, with a flick of the fingers, the Queen of Hearts—the very card the audience had collectively chosen just moments before. (Photo: Tara Brown) 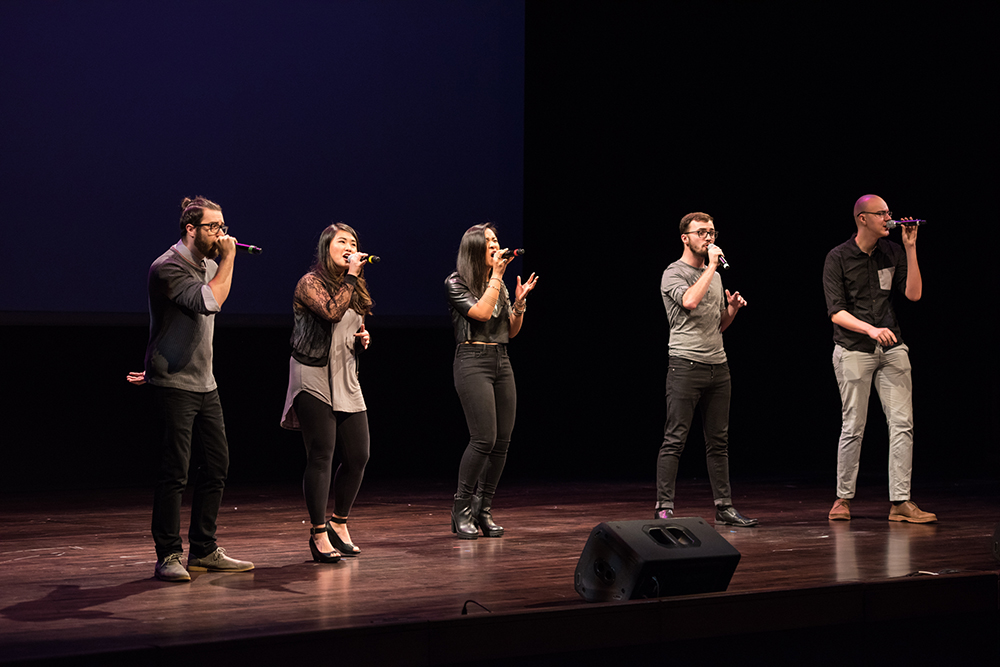 Formed while all its members were students in various a cappella groups at UW, SeaNote continued meeting and practicing as a group even after all had graduated. Their dedication to the craft showed Sunday when they kicked off the show with an original performance of Fallout Boy’s “Centuries,” arranged by group member Isaiah Lin. (Photo: Tara Brown) 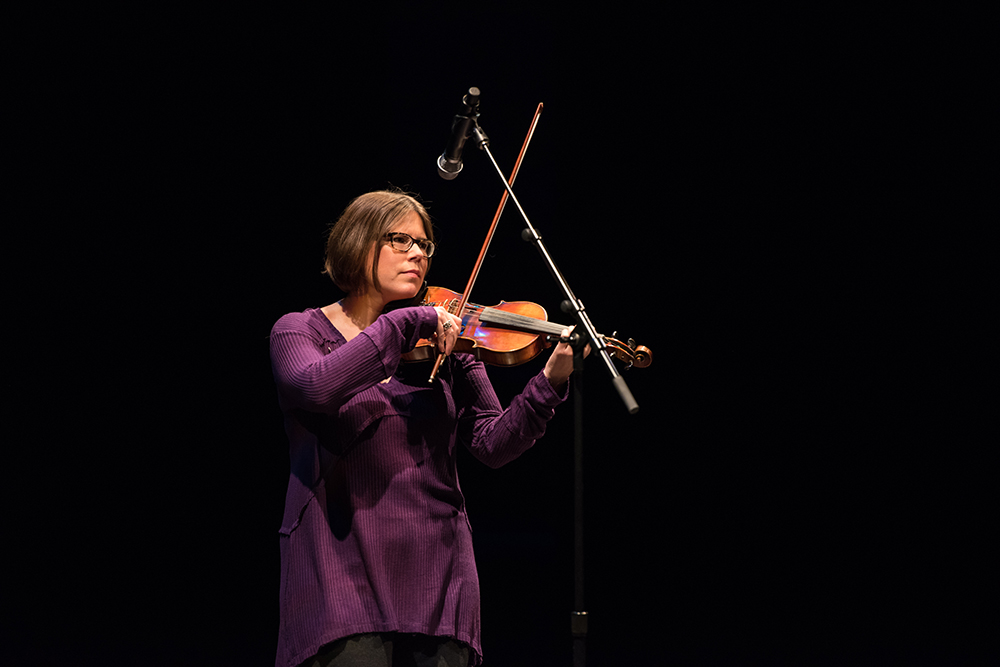 Next, it was Chris McEwan’s turn in the spotlight. The Director of Data Management and Advancement Training & Support for University Advancement rattled off three transporting tunes on the Celtic fiddle. (Photo: Tara Brown) 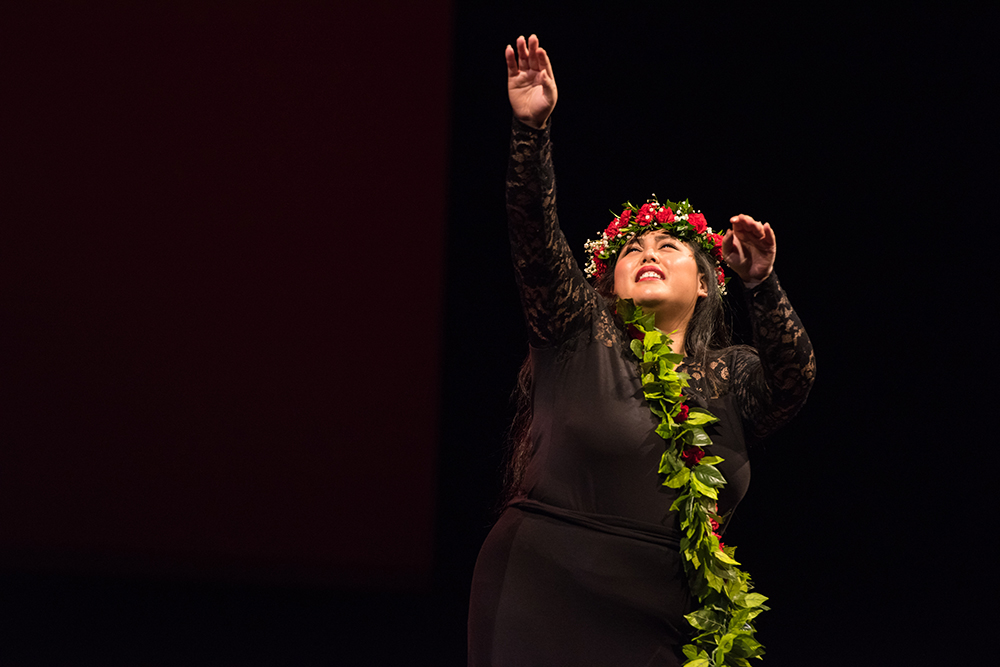 This operations manager for Conference Services knows a thing or two about putting on an event. Returning to the Meany stage after an Ovations 2015 performance, Christine Sismaet danced hula and once again had audiences raining down cheers. (Photo: Tara Brown) 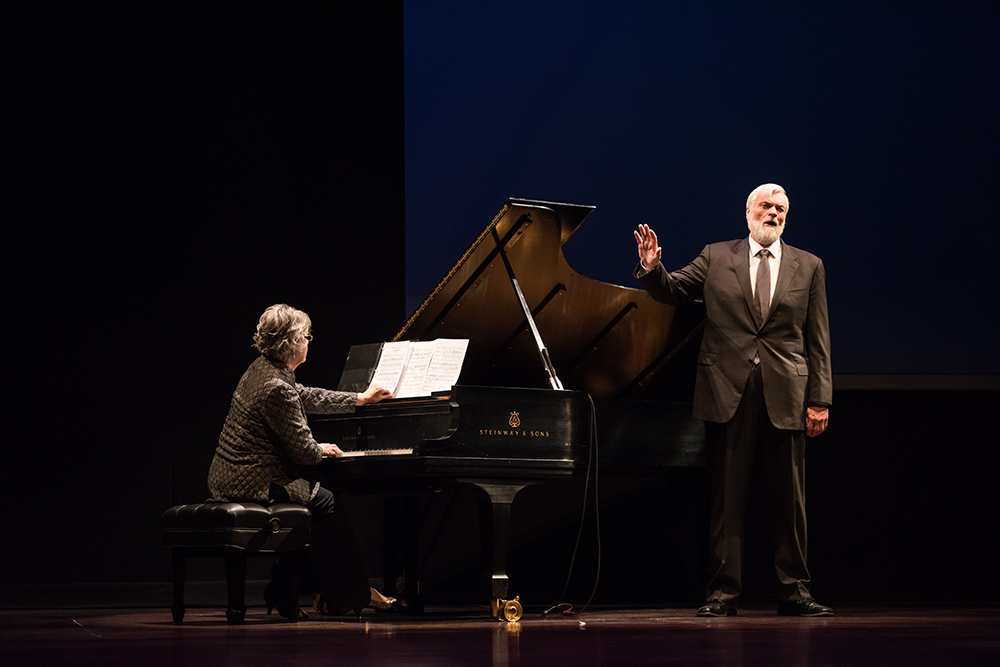 Accompanied by artist-in-residence Rhonda Kline, Clayton Brainerd delivered an impassioned performance of Rachmaninoff’s “Do not sing to me, fair maiden.” Performed in its original Russian, the song resonated through every corner of the theater in Brainerd’s rich, resounding baritone. (Photo: Tara Brown) 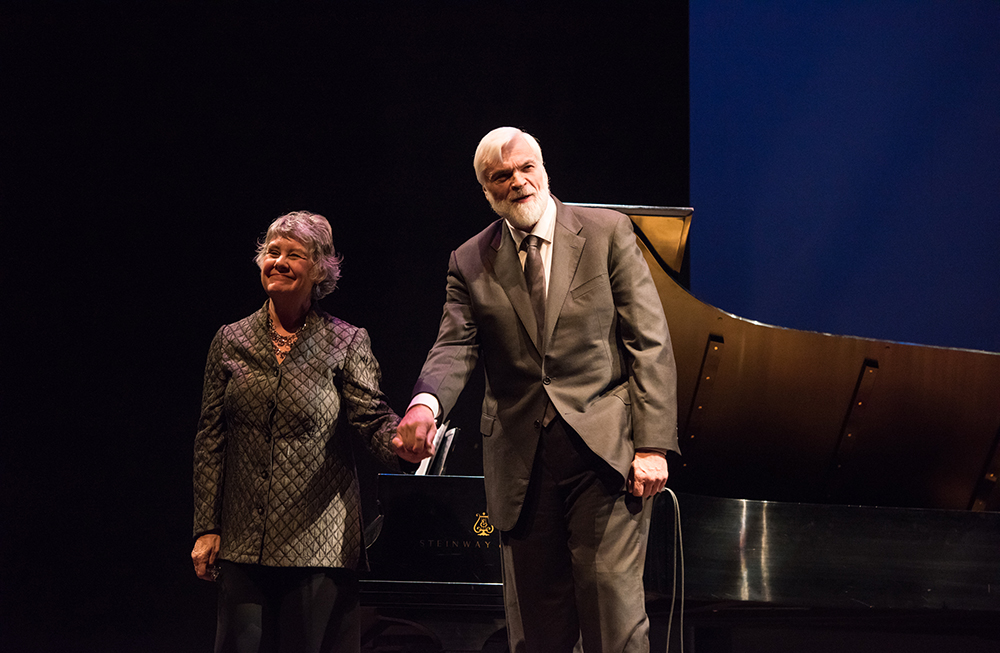 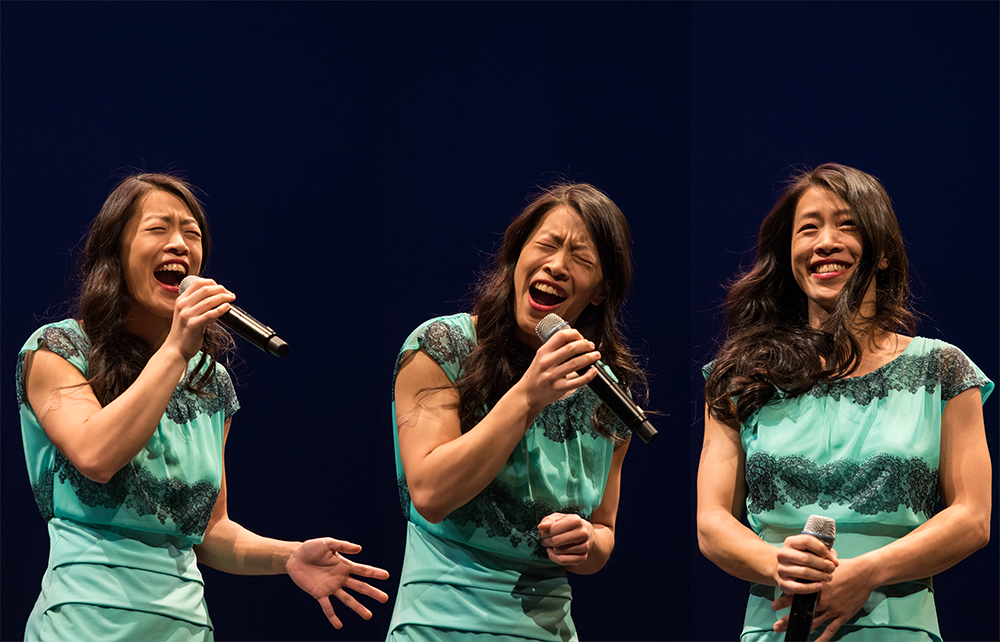 Watch out, Adele—Haeda Yasui is hard on your heels. The counseling services coordinator returned to the Ovations stage to floor audiences with a soaring, heartfelt rendition of the British songstress’ “One and Only.” (Photo: Tara Brown) 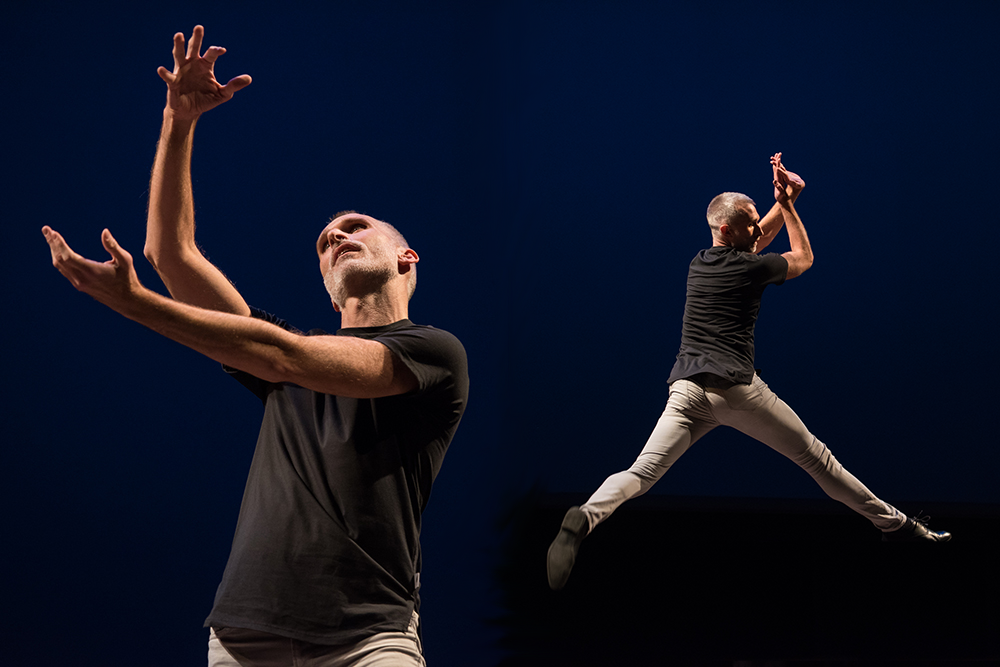 Bruce McCormick took to the air, then brought down the house, with “Stripes,” a self-choreographed dance solo set to Roo Pane’s “Tiger Striped Sky.” A professor of dance and UW alumnus, McCormick emoted joy, determination, and a deep commitment to the art form. (Photo: Tara Brown) 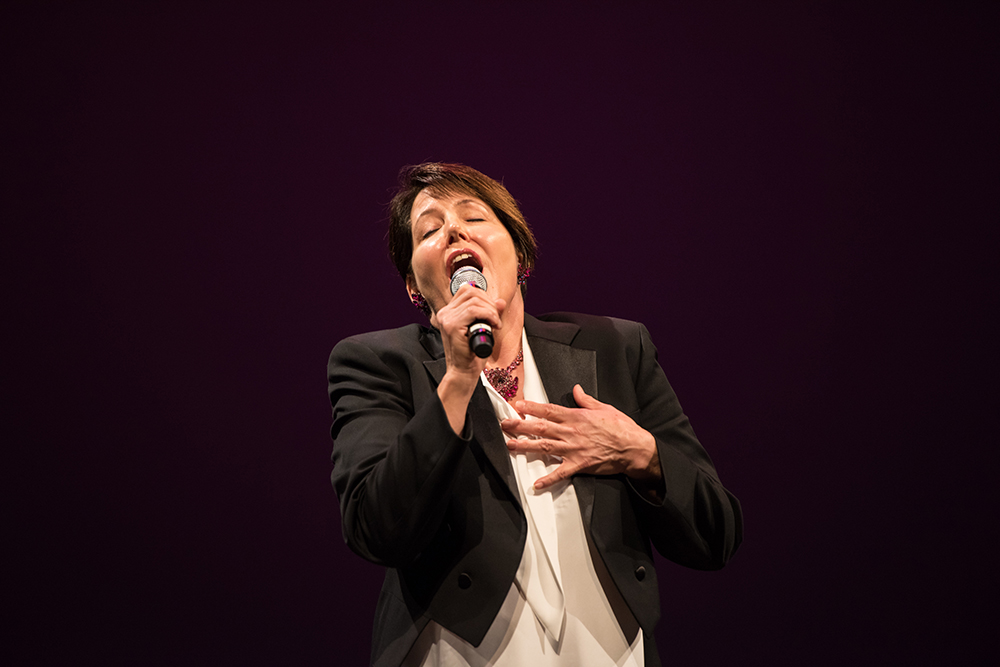 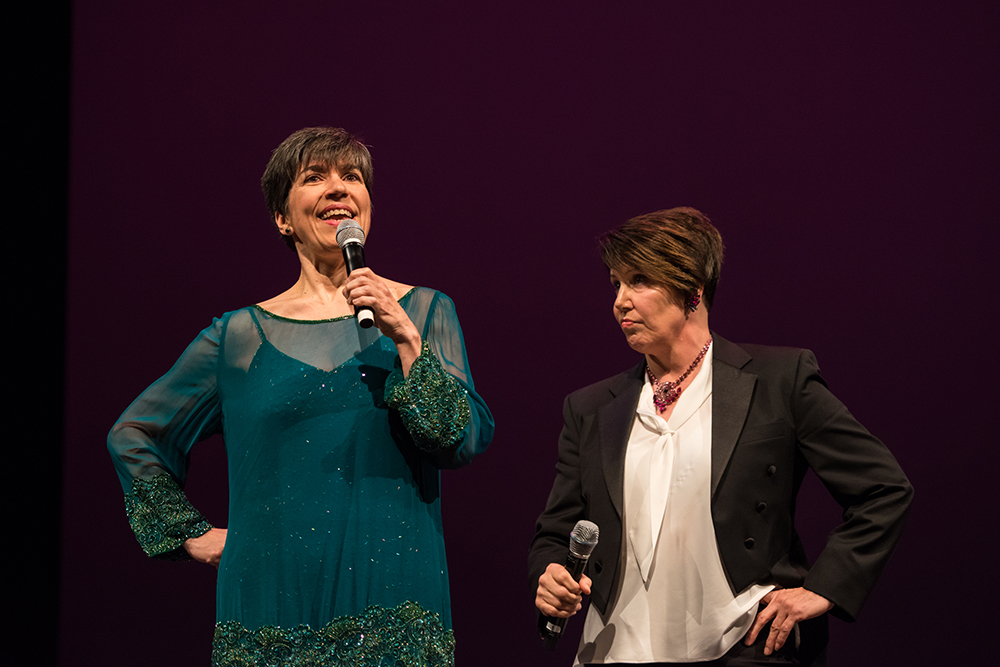 The popular piece of comic opera has been keeping hearts light for close to two centuries. Sung in duet with Virginia Daugherty (left), program operations specialist in the School of Dentistry, the piece took confidence and comic timing to pull off—something Warren and Daugherty have in spades from many years performing together throughout the Seattle area. Or maybe it’s just that cats always land on their feet. (Photo: Tara Brown) 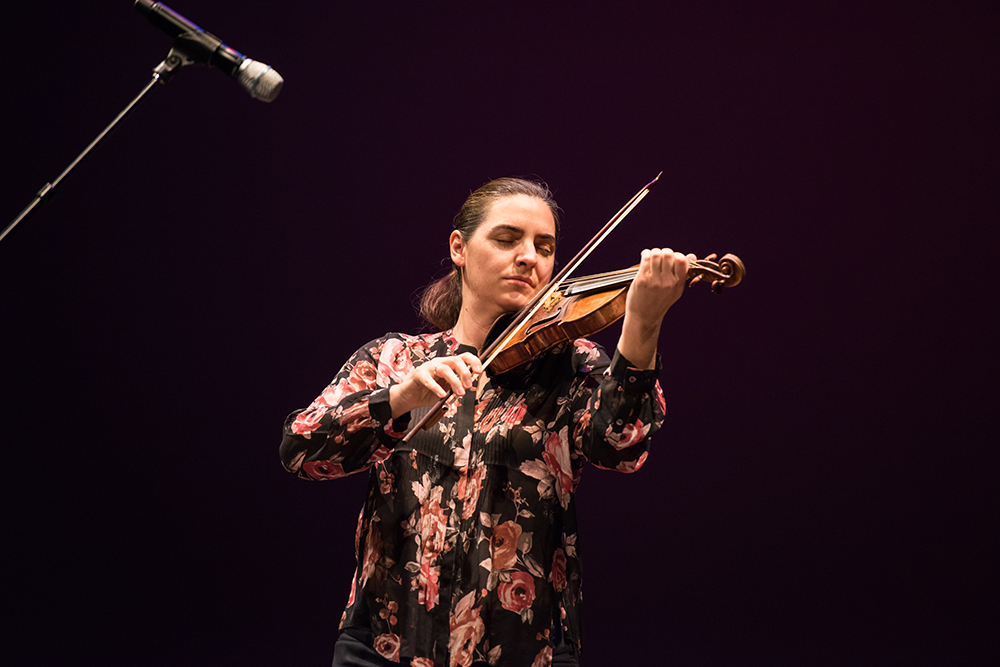 A strings faculty member with the School of Music, Tekla Cunningham was the picture of poise as she unleashed bow upon string to wall-to-wall applause. (Photo: Tara Brown) 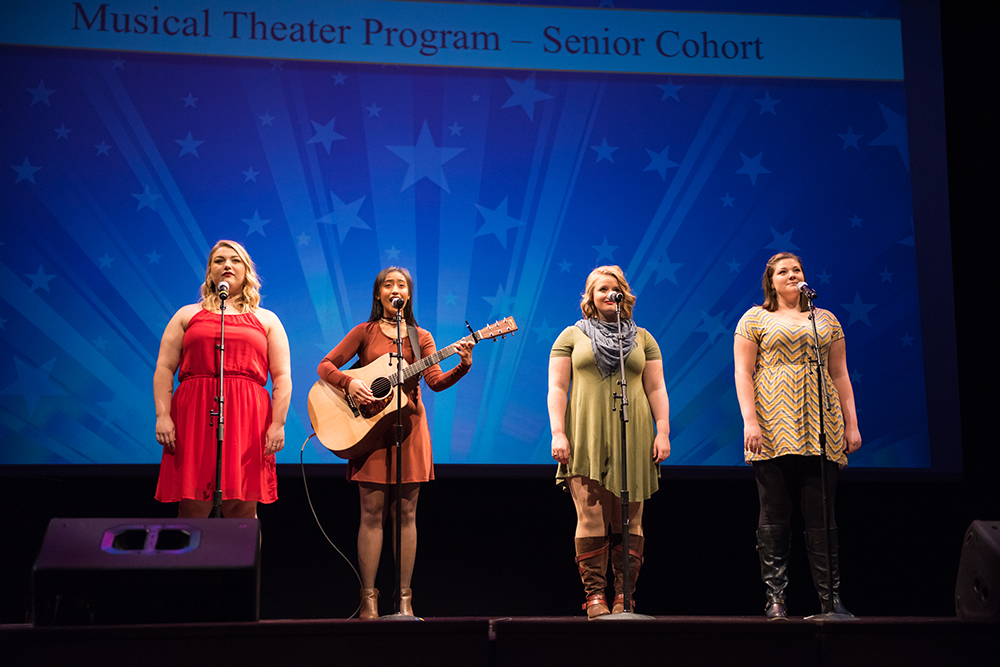 To open the second act, the senior cohort of Musical Theater students gave audiences a peek into the tumultuously fickle dating life of junior high schoolers with a performance of the opening number from “Breakup Bench,” an original musical written by Rheanna Atendido (Center with guitar). (Photo: Tara Brown) 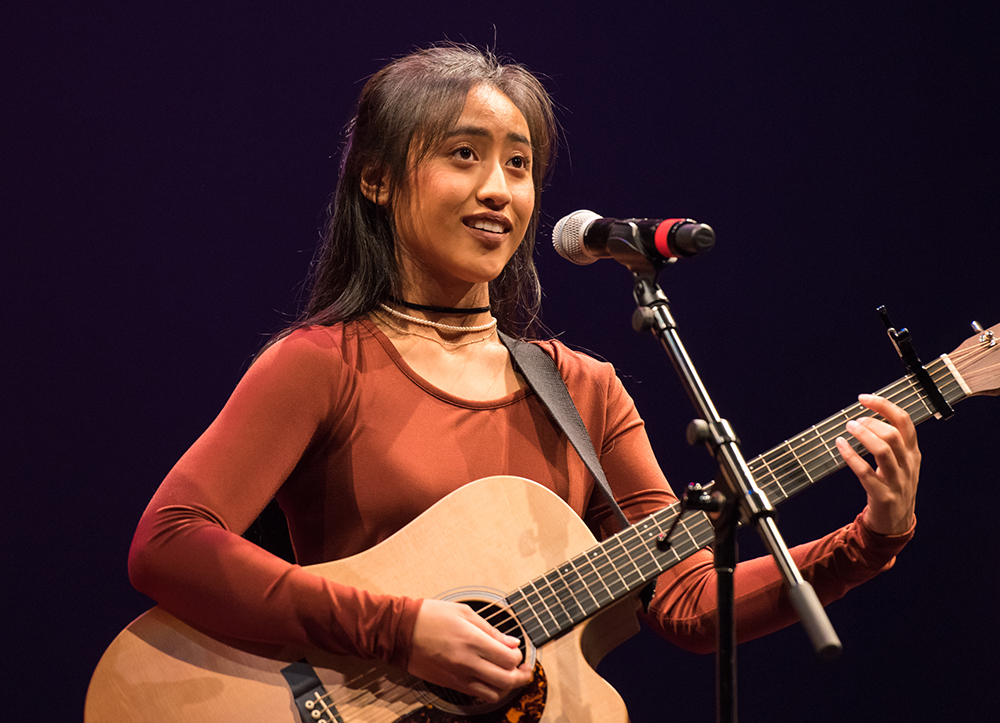 Atendido and her musical theater peers plan to hold a staged reading of the full musical this spring. (Photo: Tara Brown) 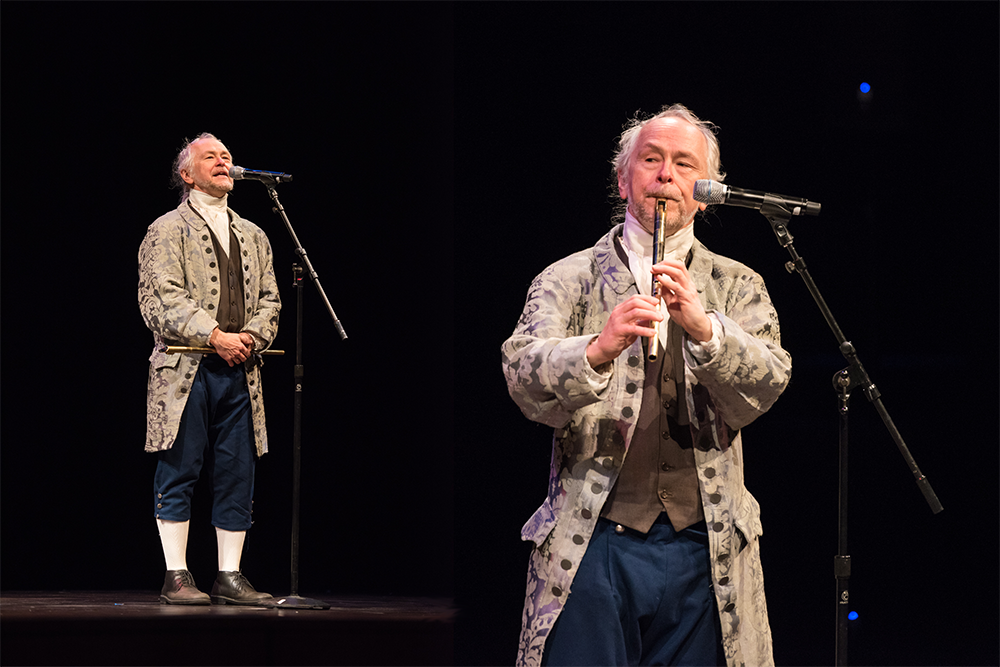 For someone who performs all over the country as Benjamin Franklin, GregRobin Smith was right at home on the Ovations Stage. The UW Shuttles truck driver delivered big on the penny whistle with the colonial-era deep cut, “To Take Part in Beauty.” The message in the tune’s title, he said, was essential to the Enlightenment ideals Franklin held so dear. Smith played the penny whistle timed to a slideshow of meditative images evoking nature’s beauty and timelessness. (Photo: Tara Brown)

We won’t say dance professor Juliet McMains and her tango partner Carlos Moreno made tango look easy (it never looks easy), but their slick-footed stylings without a doubt made it look effortless. The pair moved gracefully through a performance dubbed Argentine Tango in the Pacific Northwest, but weren’t shy about injecting their routine with its share of humor. Moreno played bashful for laughs before sweeping McMains through the air, across the stage, and into audiences’ memories for all time. (Photo: Tara Brown) 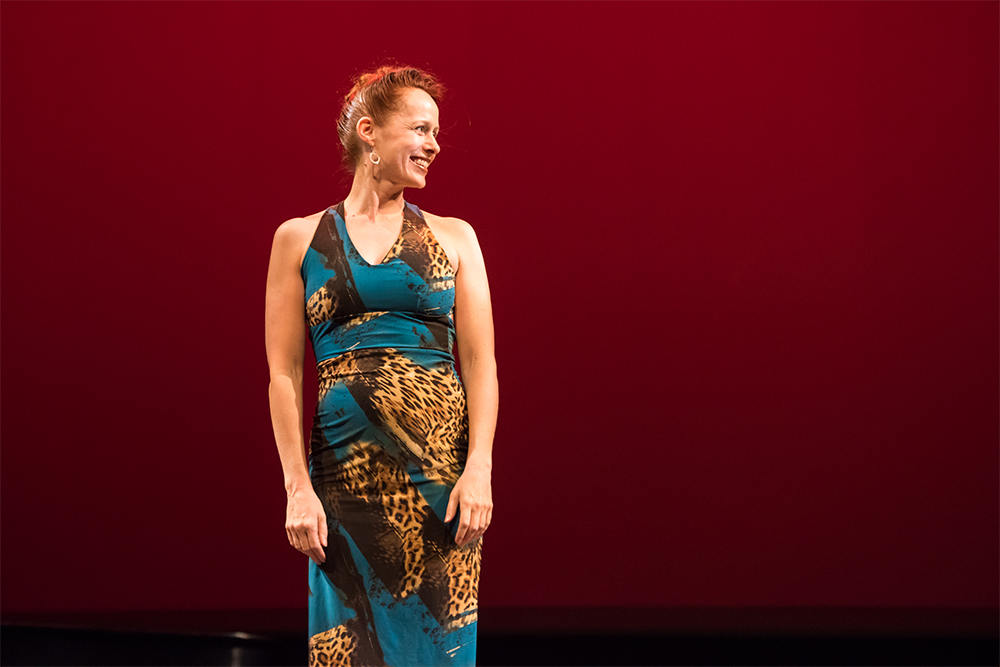 Juliet McMains started dancing Argentine tango in 2006 when she became an associate professor in the dance program at UW. Prior to that she had only danced tango in its ballroom form. (Photo: Tara Brown) 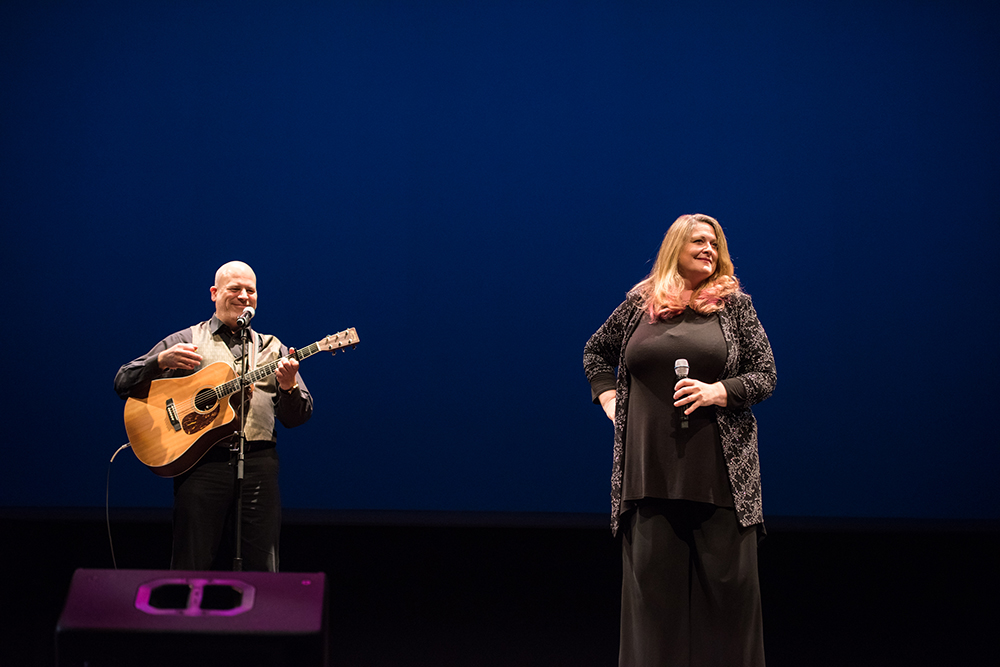 By day, Lisa Craze reads the news on KUOW as Lisa Brooks. By night, she’s a crooner of songs she also writes herself. That oeuvre would include “Homewrecker Flu,” which she performed Sunday accompanied on guitar and vocals by fellow KUOW announcer Guy Nelson. (Photo: Tara Brown) 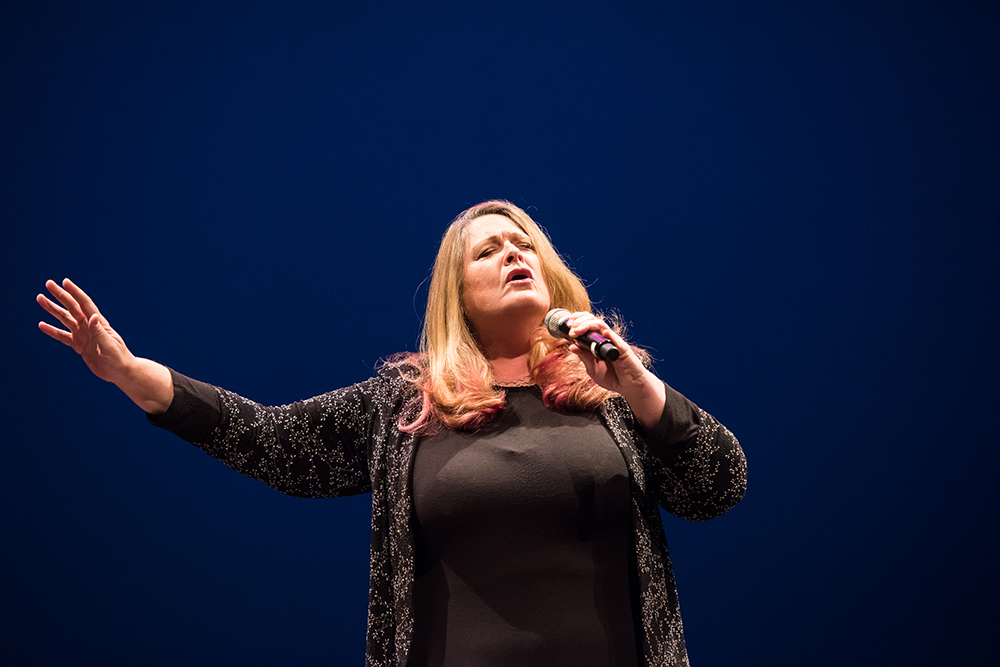 For her bluesy ballad, Brooks inhabited the persona of a jilted paramour bent on revenge. (Photo: Tara Brown) 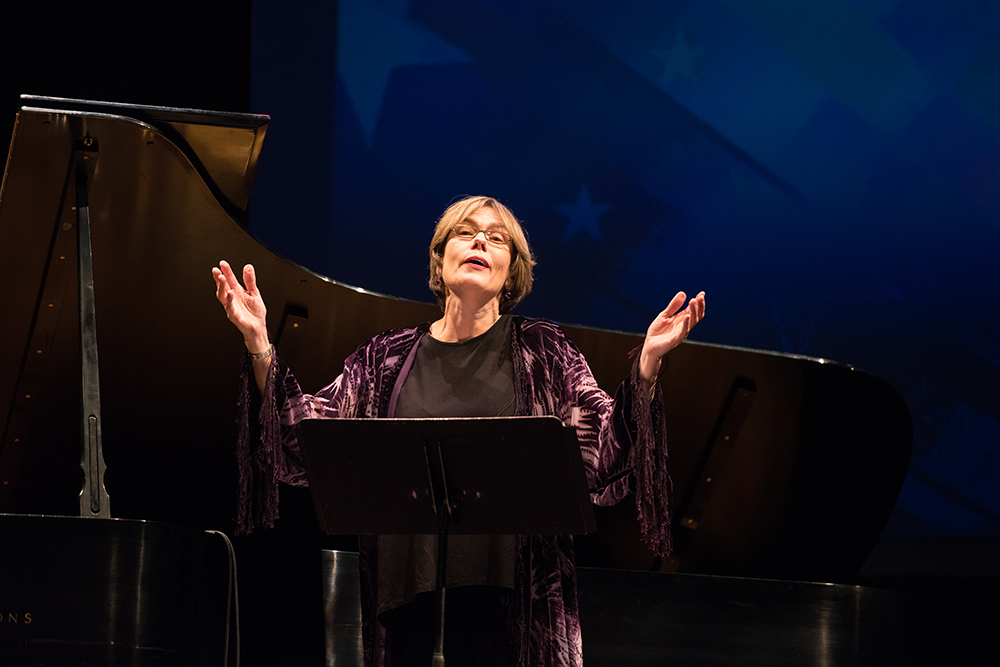 Mezzosoprano Kathryn Vinson transported audiences to springtime in another age with her performance of “Die Mainacht (The May Night)” by Johannes Brahms. Accompanied by Nola Allen on piano, the fiscal specialist in the MBA Program at the Foster School of Business succeeded in rekindling the magic and sweeping majesty of Romantic era vocal works. (Photo: Tara Brown) 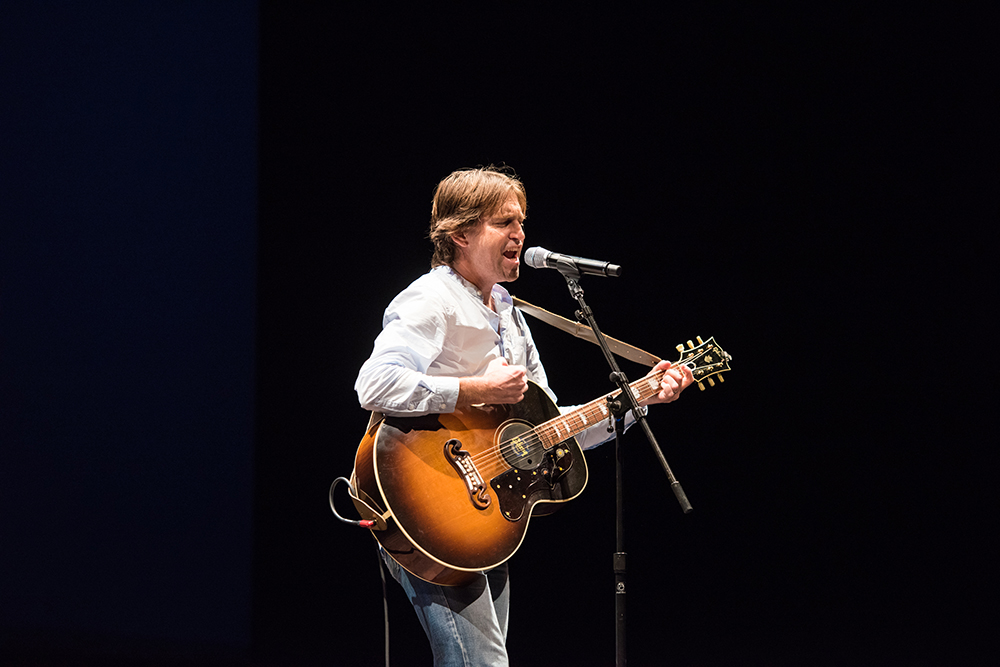 Resident rocking radiologist Jalal Andre plays together with two bandmates as Echo Texture. When one of them got married the day before Ovations, band frontman Andre was naturally a part of the celebration. But that didn’t stop him from grabbing his axe the next day to take the stage for a solo rendition of “The Architect,” a track from the band’s forthcoming album. (Photo: Tara Brown) 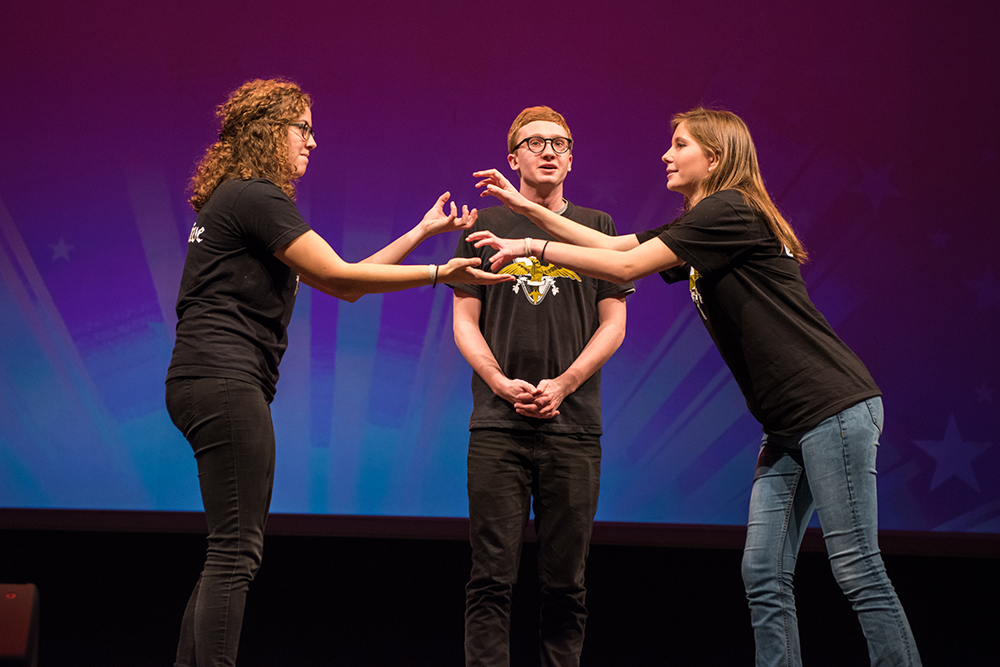 Members of The Collective, UW’s first—and only—improv troupe—have object work down to a science. An improvised science. (Photo: Tara Brown) 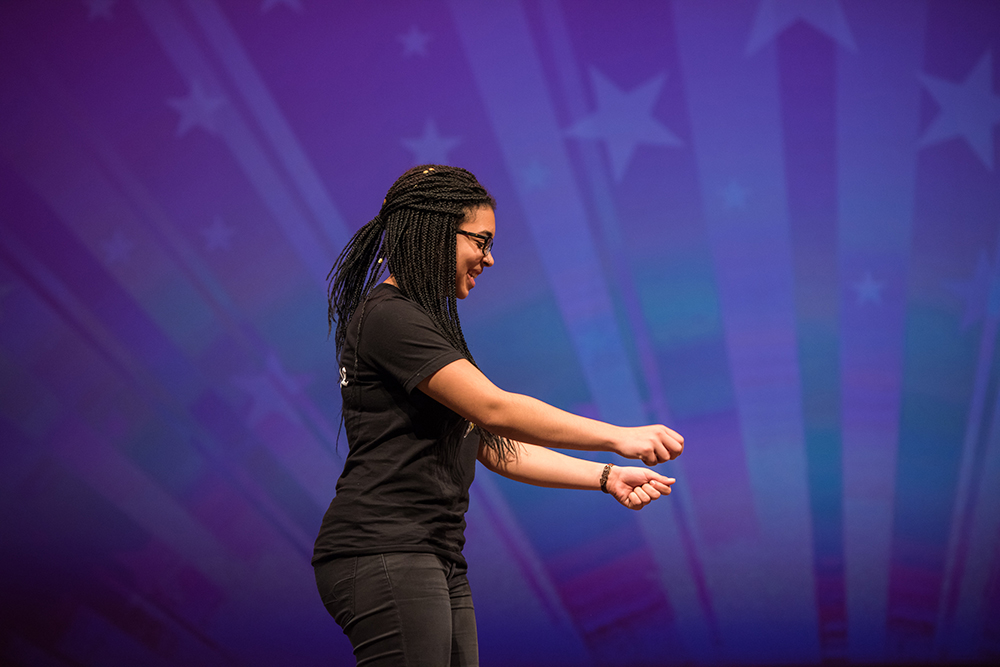 Improv comedy is all about giving—which is exactly what The Collective did when they rolled out a barrel of laughs and proceeded to smash it all over the stage as Ovations’ fifteenth and final act. (Photo: Tara Brown) 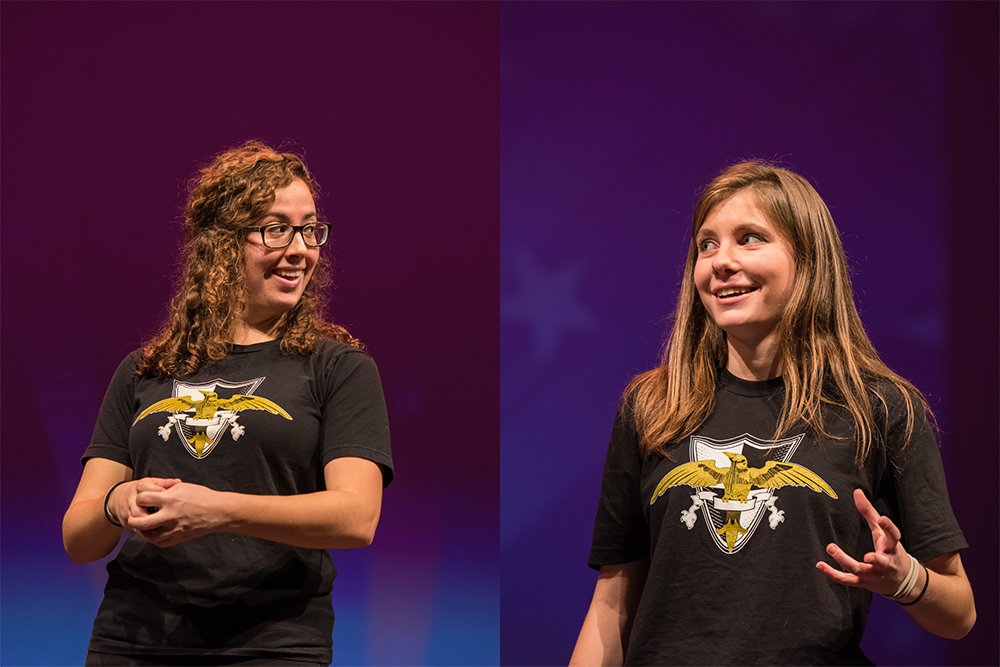 The Collective’s free-wheeling comedy may have looked effortless, but it was steeped in sound comedic basics, not least of which is eye contact, a key tenet of successful improv. (Photo: Tara Brown) 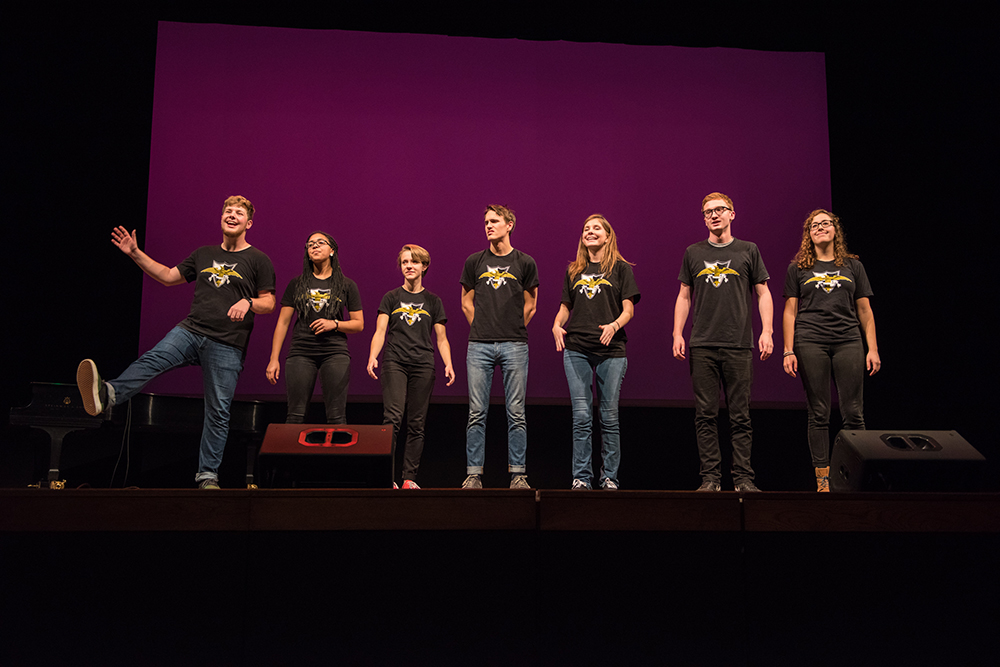 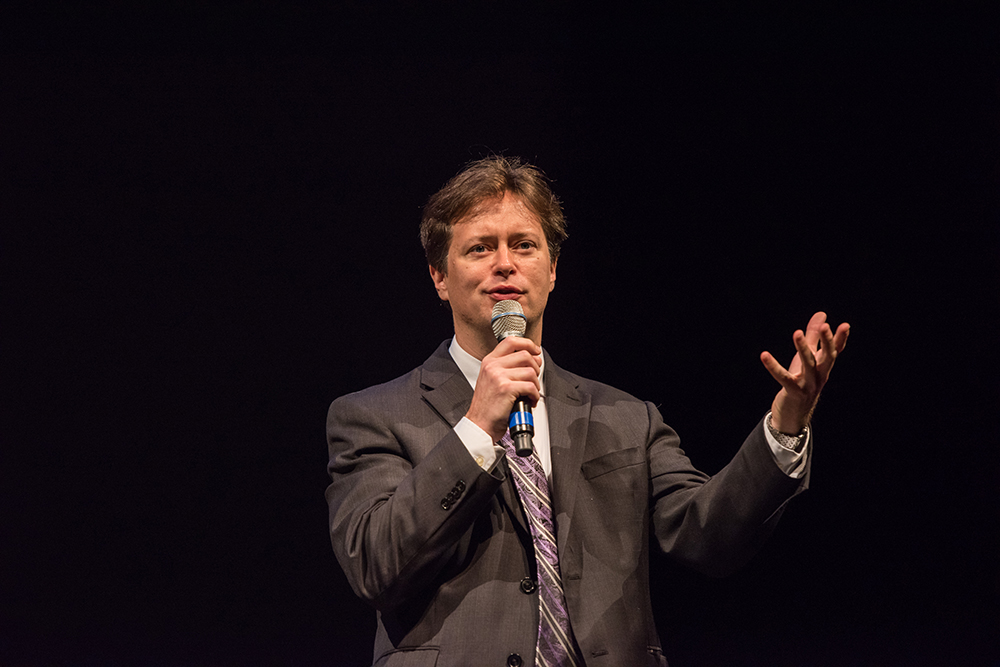 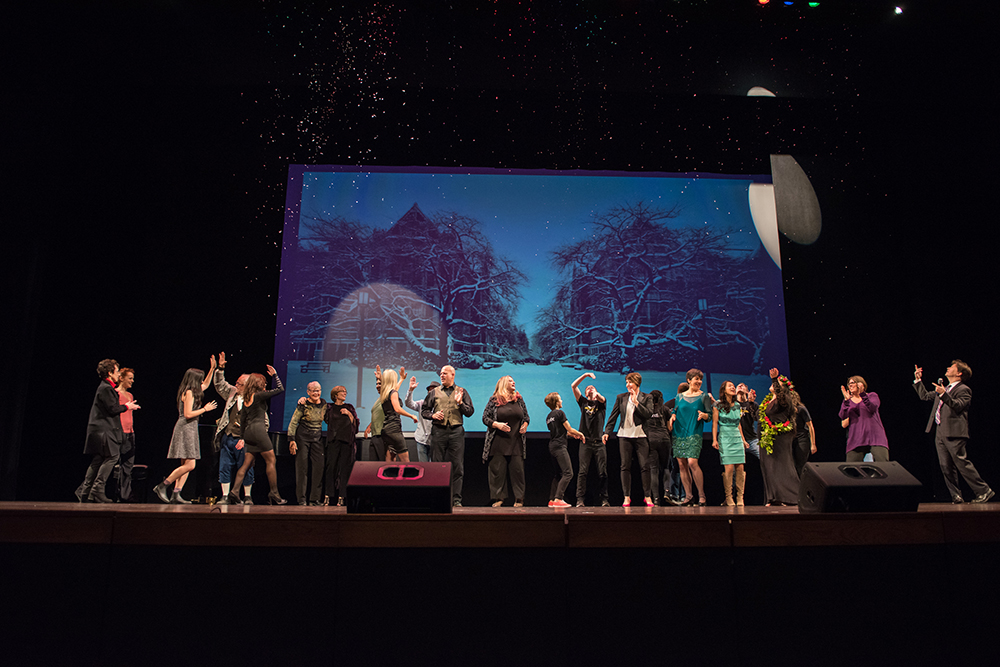 Snow fell overhead and “We Are Family” played as all performers took the stage to celebrate. (Photo: Tara Brown) 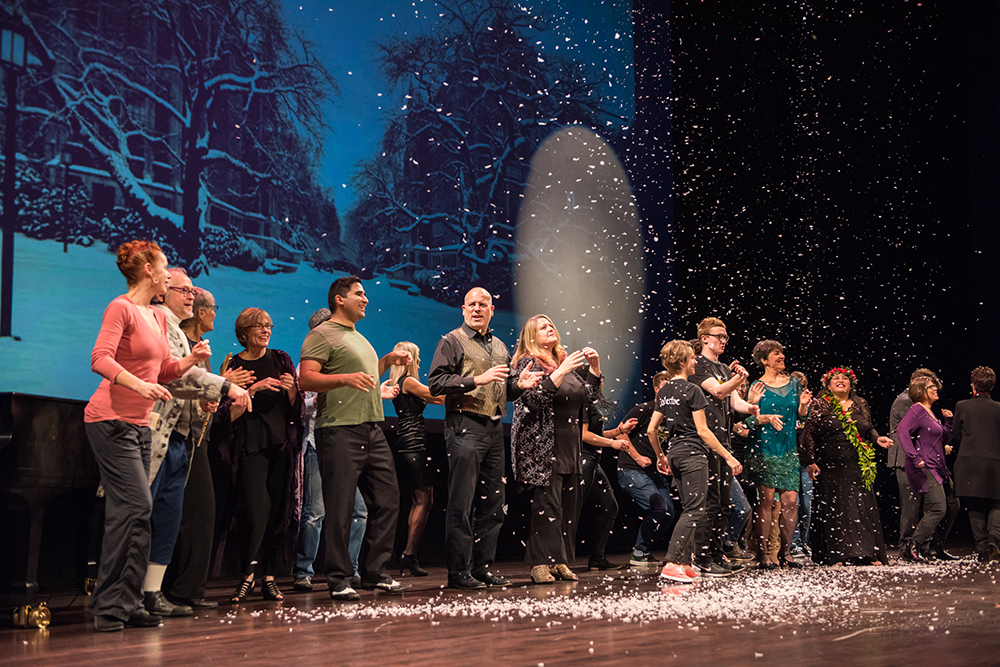 A big thank you to our performers, artists, and all in attendance. We hope you had as much fun as we did! There’s certainly more in store for next year. Check our video page soon for links to individual performances and follow us on Facebook, Twitter, and Instagram for more Ovations! content and photos.