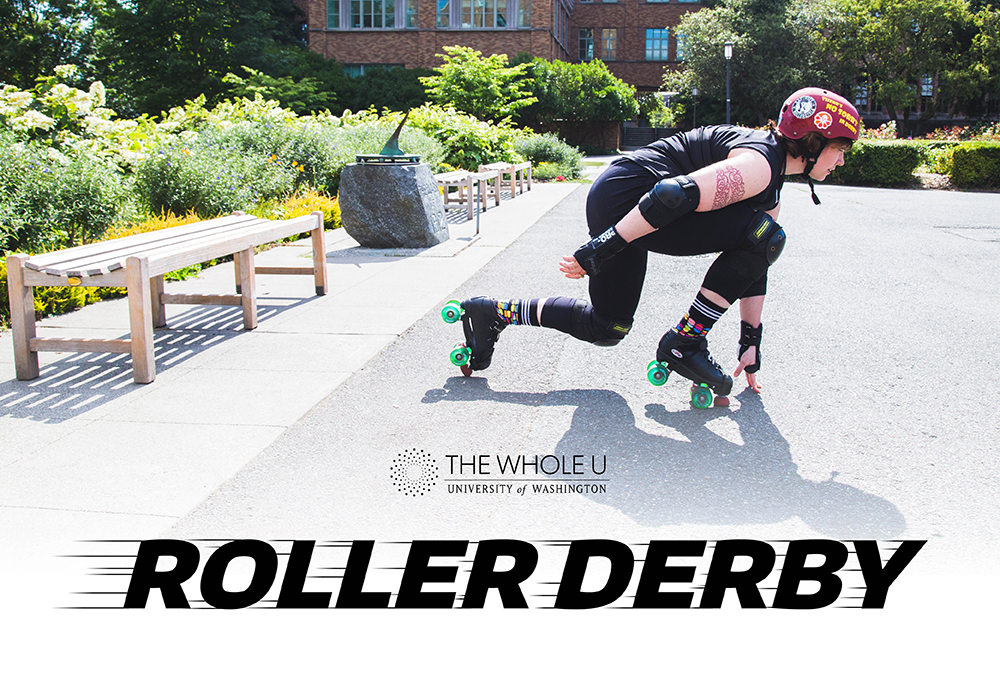 When the weather is dry, we see athletes of all kinds out and around town, some with their wheeled gear and elbow pads shredding sidewalks and roads alike. After catching wind of a pretty intense roller sport called roller derby, I thought I would take some time to dig a little deeper into what it takes to get involved or master the skills of derby skating – hoping that maybe someday I could shred sidewalks in a sweet pair of skates too.

What is roller derby?

One of the things I immediately learned about roller derby is that it has a somewhat brief, though very interesting, history. I was surprised to learn that the basic idea of roller derby – to help your team’s jammer skate past the rival team while simultaneously blocking the other team’s jammer from passing you – has been around since about the 1930s, and that at first the sport was largely designed around its entertainment value, similar to WWE.

But all of that changed with the millennium. In the early 2000s, roller derby underwent a drastic makeover that began with the creation of the Women’s Flat Track Derby Association, which began excluding flying straddle blocks and leveling the tracks skaters competed on. Rat City Roller Girls, a local league now based in Shoreline, was one of the many leagues around the country that resulted from this retransformation of the sport. It’s also why an administrative coordinator for UW’s Department of Health Services, Ann Warner Smith (Annie Warhead), first entered the roller derby realm.

Originally from Havre, Montana, Warhead told me when she first learned to skate it was on a tiny slab of cement outside her house – one she skated on every day. When she moved to Seattle in 2002, roller derby wasn’t really on her radar and she hadn’t skated for nearly a decade. But after hearing about Rat City from a friend, Warhead knew she had to check it out.

“I went to a work party at the Information School and a friend of my coworker had a Rat City shirt on, and I grilled him,” Warhead recalled. “I was like ‘what is that, what is that, how do you do it, and where do you go?’”

After studying the game and practicing her derby skills, Warhead found herself at tryouts. Despite the fact she tried out with roller girls nearly ten years younger than she was at the time, Warhead made the team. Her sparked interest in the sport immediately grew into a fierce dedication, and the rhythm of training and competition soon took over her everyday life.

Learning and living the game

After a surprising result in her tryouts, Warhead was nervous for the beginning of what would be the most skating-intensive years of her life. Not only did she end up making the team, but Warhead’s daughter ended up on a squad too – choosing her own derby name as “Baby Warhead” – which resulted in an unforeseen coaching opportunity.

Warhead started coaching for the Tootsy Rollers, a squad made for girls ages 8 – 12. She eventually evolved into coaching older kids and even adults as she followed Baby Warhead through the junior ranks, but Warhead assured me that it never meant special treatment for her own roller derby progeny.

“It was awesome, and we never had any problems being coach and daughter,” Warhead said. “She learned how to skate with the all-stars of the Derby Brats even though she was a Tootsy Roller, but the only times I ever was like, ‘oh, that’s my kid’ is when she got hurt – which wasn’t very often.”

Luckily, injuries among the younger roller derby skaters aren’t too common, Warhead continued, since the local junior leagues start by only learning to block. But some of the first steps every skater needs to take, is finding the proper safety gear, no matter what age they are.

“NEVER buy cheap knee pads. Always get the better ones, especially when you’re new,” Warhead said. “It’s worth it; your body cannot be replaced.”

One local derby equipment expert, Jenny Savaglio (also known as La Petite Mort, or Morty) echoed similar thoughts on the importance for protecting your body. In fact, she mentioned it’s one of the biggest challenges newcomers have when they enter the sport, though the physical demands aren’t always the toughest part – committing to such an intense sport can be intimidating at first.

Skating in derby can cost you an arm and a leg in another sense too; dues are often required for league skaters, and the initial cost of equipment can run pretty high. But Warhead and Morty mentioned that you should never underestimate the value of used gear if you’re on a tighter budget, because buying some second-hand is a common strategy for even the most experienced derby rollers.

“You’re going to have to have some income to do derby, but you don’t have to get fancy stuff,” Warhead said. “You don’t need pro-stuff unless you’re a pro, and you can always get consigned equipment.”

Starting your roll
Although she’s no longer involved in a derby league, Warhead says she grew more confident from her experiences, and met people she now sees like family. Her health, self-esteem, and sense of self all changed because of derby, and Warhead recognizes how essential it’s been.

“I needed to learn the lessons about myself that I learned: that I can do anything if I set my mind to it. I thought, ‘with this if I’m afraid, I’m going to be first in line, I’m going to do it again, and I’m going to get right back up and make myself do it,’” Warhead said. “And I did exactly that. I also learned I’m really good with kids.”

Regardless of whether she’s in derby or not, Warhead still finds time to skate. Sometimes she skates out at Green Lake, or with her daughter on campus – right here at the IMA’s Friday Night Skate sessions. She says it’s a great family activity, but it’s also great to practice her best form while still having a really good time.

Evan Apolis, a roller skating alumnus from UW, agrees that Friday skate nights are fun too – just one of the reasons he’s been coming back to the IMA to help organize them since he graduated in 2008. At first he was just a participant, but they asked him to stay on after he kept coming back. His regular commitment to skating didn’t hurt, but there’s one thing particularly exciting for Apolis: dancing.

“8 years ago, I was very shy, but now I feel comfortable dancing around like a crazy person,” Apolis wrote to me in an email. “Through skating I’ve learned to be more outgoing both socially and physically, and that is actually something I really try to encourage in other skaters – feeling comfortable enough to wave your arms about and actually try dance moves in public.”

The IMA Friday Night Skates are great for everyone, even if you don’t have a pair of skates. Rentals are available for skaters who might just be starting out and have yet to buy a pair, and is free to anyone who works at or attends UW. If you want to bring a friend, renting skates and buying a guest pass will cost a total of $11.

Whether it’s empowering young girls to be tough and take on the derby floor, or encouraging young men to dance around in public, skating might be your next favorite sport, so get rolling! For more information on Roller Derby leagues both local and around the world, check out the Women’s Flat Track Derby Association or Rat City’s website. You can also find the WFTBA’s Youtube channel to watch a bout or two and get an even better sense of the game.

One Thought on “Rollin’ around UW: A Derby Story”