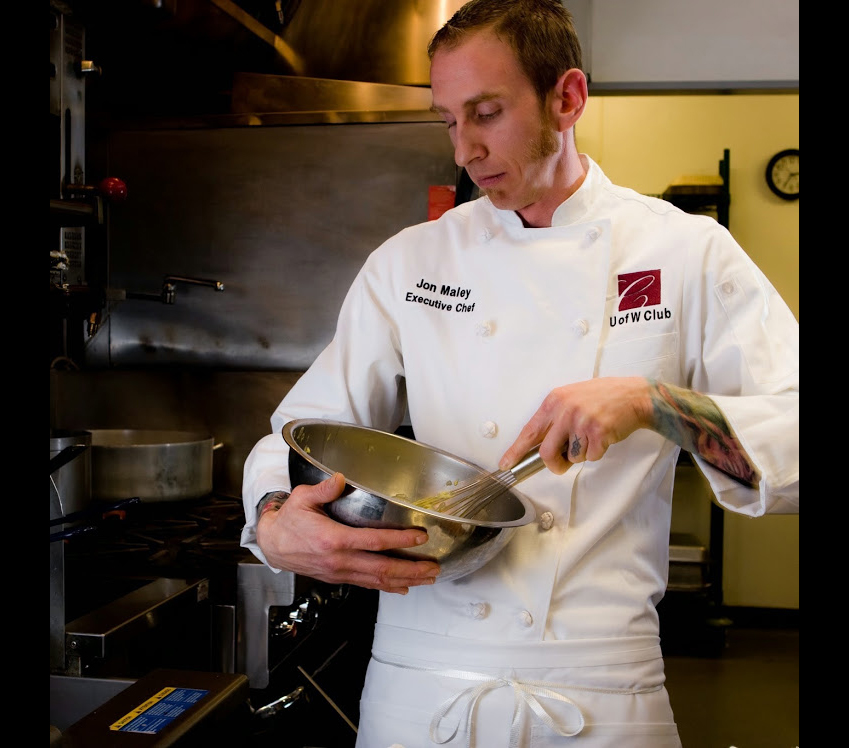 For the second week of the March Culinary Countdown, we asked UW Club’s Executive Chef Jon Maley to share some of his delicious recipes with us. We also asked him a few questions to keep us inspired throughout the rem­­aining 14 days of our homemade meals challenge.

Tell us a little bit about yourself. How did your love for the food industry start?

I was born in a small farm town in New Jersey. Growing up next to a farm and having goats of our own, I learned what it meant to put in a hard day’s work. At age 10, I moved with my family to California where I was able to experience the West Coast food scene to its fullest. I started working at 14 in a cake shop washing dishes. From that point on, I knew my future was in the food and beverage business. After working through high school at some casual restaurants, I hit the road and traveled the United States for a few years working in kitchens throughout the nation. In 2004, I realized that food was my obsession, and went to Le Cordon Bleu in San Francisco.

You worked at some really impressive restaurants.

I started my career at the Five Diamond-awarded Lafayette Park Hotel. I later went to work under Michelin Starred Chef Roland Passot as a sous chef of Left Bank Brasserie in the East Bay. In 2008, I decided to move to Washington and enjoy the fruits and labor of the Northwest. I took the job of executive chef of The Local Vine, which was started by James Beard Award recipient Chef Jason Wilson. After the closure of the restaurant due to hard times, I was extended the opportunity to open Book Bindery, under Chef Shaun McCrain as his sous chef. In 2011, I joined the team at The University of Washington Club as a sous chef, and two months later I was promoted to executive chef.

What is your favorite dish to cook?

I think my favorite food to cook would either be butter basted scallops or sweetbreads. It’s a hard question because some foods could take three days to prepare, like pâté or rillettes.

What is your favorite dish to eat?

Lamb has always been my go-to food to eat. I just love all cuts and preparations.

What’s never missing in your fridge and pantry?

I can’t go without real butter and a good Sherry vinegar.

A lot of people feel like they don’t have the time to cook. What advice would you give them to speed things up in the kitchen?

Treat your kitchen like a restaurant. Make a prep list and shopping list on the weekend, and try to utilize ingredients along the week. Keep it simple, but have fun. Roast a chicken for dinner one night, and use the leftovers for a wrap or salad the next day or night.

In my kitchen, there are no funny accidents, but it is funny to watch us all bump into each other in the morning as we’re running around, getting set up for lunch.

What do you love about your job?

I love almost everything about what I do– the smell, the heat, the time it takes to put a great product on a plate, the adrenaline rush of service.

Your dishes are like pieces of art. How do you get your inspiration?

I dream about food every night. It’s an obsession. I wake up rushing to work to try something out. I watch other chefs from all over the world, see what they are doing, and maybe incorporate it into what I’m doing. I love everything about food and I don’t want it to just taste good. Some people say it’s pretentious, but I enjoy making food look good also. But flavor is most important. I never forget that.

Thank you, Chef Jon for sharing your thoughts and amazing recipes with us. And thank you, Ben Atkinson (Harborview Nutrition Manager) for sharing some nutritional insight on each recipe.

Try out Chef Jon’s recipes this week and take pictures of your rendition. Post them on our Eating Well Facebook Group or email them to wholeu@uw.edu. We’ll choose the best picture for each dish to add to the article! 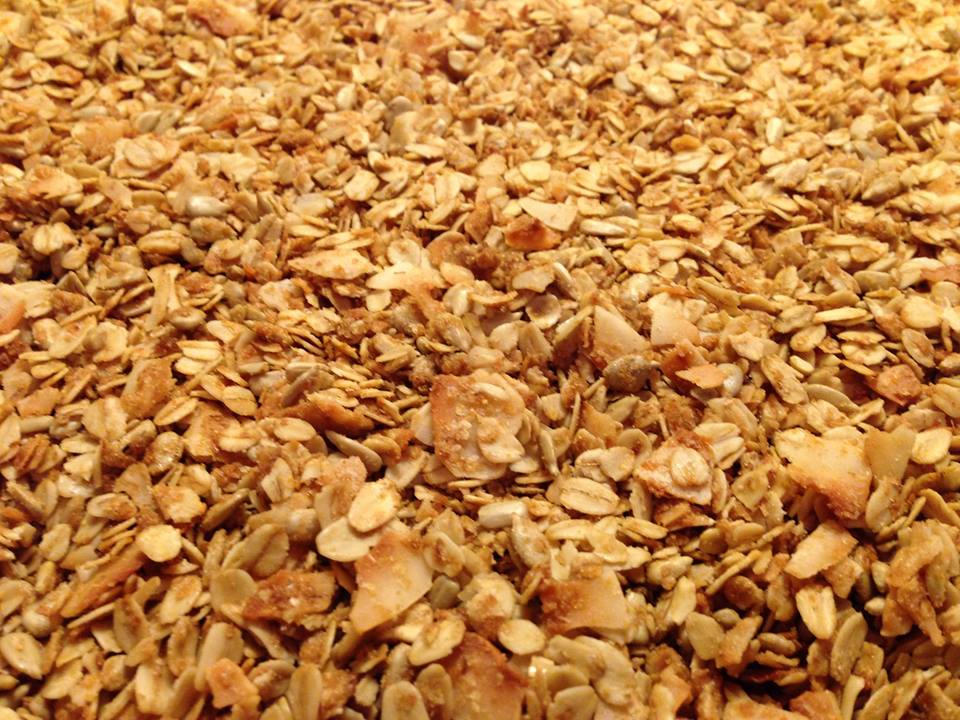 Ben’s advice: “Once you make this recipe, you’ll wonder why you ever bought granola in the cereal aisle. It is really fun trying out different sweeteners, fruits, seeds, or nuts in granola recipes. Come up with your own signature blend!”

Helpful Hint: Can be added to yogurt, milk or milk substitute, or eaten as-is for a quick boost of healthy energy.

Ben’s advice: “Meals like this are great for busy, working people. At my house, we make about three meals like this on Sunday to have ready to reheat during the week. This meal is flexible enough to eat at breakfast, lunch, or dinner. The inclusion of milk and eggs means that you do not need to bug your kids or significant other to have a glass of milk with their meal!”

Helpful Hint: Frittatas are a wonderful way to make the most of your leftovers!  Serve your favorite vegetables for dinner, then use the leftovers in your frittata the next day. Roasted potatoes from the night before make a great addition to your frittata as well.

Ben’s advice: “Looking for ways to get more vegetables into your diet? Bruschetta might be your ticket. It’s loaded with tomatoes, garlic, shallots, and basil. This recipe is like a cute, little healthful pizza. You can even make extra of the topping, so you’ve got enough to snack on all week.”

Ben’s advice: “Bringing this wrap to work will make your co-workers jealous, guaranteed. The mix of flavors is really fresh and reminiscent of spring. If you’re frustrated taking the big rib out of the kale, try holding it in one hand; then using your pointer finger and thumb, run down the rib while you peel back the leaves on each side. Kale is really gaining popularity, and is grown almost year-round in the Northwest. You can even use the slaw from this recipe as a delicious and healthful salad.”

Helpful Hint: If you do not have an electric mixer with a paddle attachment, you can buy pre-whipped cream cheese or whip by hand.

Ben’s advice: “The thing that is great about chicken salad is that it is able to be used on cold salad greens, as well as on sandwiches. Pair the chicken and cauliflower mixture with some fresh spinach and dried fruit, and you have a salad worth bragging about for lunch on Monday. Spread the mixture on two slices of whole grain bread or a bagel, and you have another fantastic lunch for Tuesday. Chicken salad is here to save your week!”

Optional: If making this recipe often or in large batches, the milk mixture used to boil the cauliflower in can saved and used again up to three times.

Helpful Hint: Blended oil is a blend of 75% canola oil and 25% vegetable oil.

Ben’s advice: “Adventurous cooks try substituting mashed cauliflower for mashed potatoes, and this recipe shows why. It is quite similar, but the beauty is that it’s much lower in carbs than potatoes. It’s a nice way to lower the calories in a potato-based recipe, while still getting much of the same flavor and texture. Combined with the fresh snapper and fingerling potatoes, this recipe is a complete meal that will please any chef or nutrition enthusiast.”

Helpful Hint: Blended oil is a blend of 75% canola oil and 25% vegetable oil.

Ben’s advice: “Here in the Northwest, we may not get enough Vitamin D. Mushrooms are here to help. Exposing mushrooms to ultraviolet light or sunlight makes them produce extra Vitamin D. Look at labels for mushrooms harvested in the wild or treated with ultraviolet light. You can even set them outside in the sun prior to cooking them.”

Optional: For a better presentation, you can press the top of the bread pudding with an equal-sized pan once it comes out of the oven. This allows you to cut more precise pavé or rectangle shapes.

Share pictures of these meals or your own recipes in the private Eating Well group or email them to wholeu@uw.edu for a chance to win a Whole U apron!

When you share your own original recipe, you’ll be entered into an additional contest. At the end of the Countdown, Chef Jon will select the winning recipe, which will be featured at the UW Club as a weekly special April 13 – April 17. The UW Club is awarding the winner with a complimentary lunch for 2 during that week. Our winner will have a chance to savor Chef Jon’s and his team’s rendition of his/her recipe! 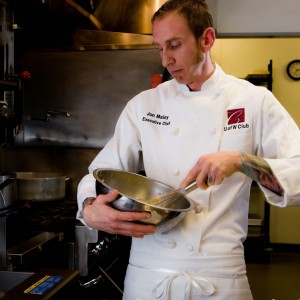 Jon Maley is the executive chef of The University of Washington Club. After working at many highly acclaimed restaurants, in 2011 he joined the team at The UW Club as a sous chef, and 2 months later he was promoted to executive chef. In 2013 he won the “Club Chef of the Year” award. Chef Jon’s mantra is “Make food fun. So many people are in a rush to eat and go, but I think it is time to slow down and enjoy what’s on the table. Food should be filled with friends, family, and conversation.” When Chef Jon is not at work, he enjoys spending time with his lovely wife Rebecca, son Conner, and daughter Tesla. Doing anything outside, including yard work, is a day well spent in his book. He hopes to open his own restaurant in the next year or two. 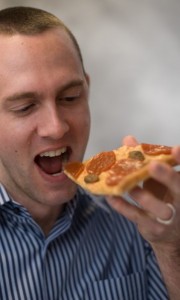 Ben Atkinson is a dietitian at Harborview Medical Center, where he manages the outpatient nutrition, informatics, and wellness programs in the Nutrition and Foodservices department. He enjoys riding his bike with his family, learning New Jack Swing dance with his kids, and polishing his dress shoes.

One Thought on “Recipes for Week 2 of March Culinary Countdown”

Don’t toss those chicken bones and scraps after making the chicken salad! Make some chicken broth or put ’em in the freezer to do so at a later time. 🙂