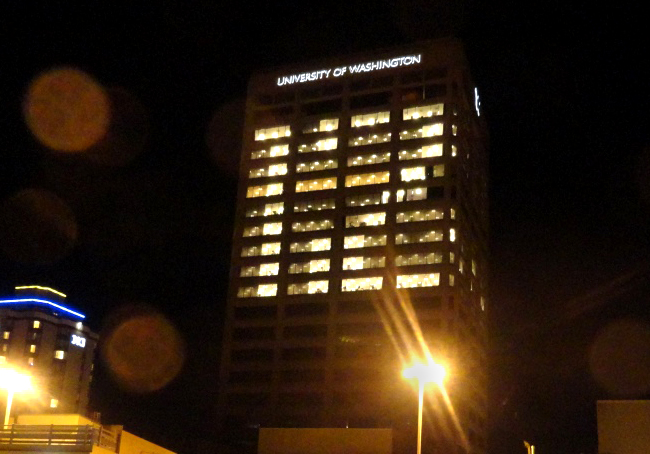 I got to spend a lot of time with UW Police Commander Steve Rittereiser as he and I joined a handful of other Whole U volunteers in placing 1,200 kettlebells across Dempsey Field. As we walked the field, I mentioned that I wanted to write a blog post on how staff and faculty were showing their Seahawk pride as the Super Bowl neared. A smile crossed his face.

“Well we do that in UWPD with Seahawk Fridays. Everyone who is not in uniform is encouraged to wear their Seahawk gear to work,” he said. “But I think we all have a deeper connection to the Seahawks. Let me show you a picture.” 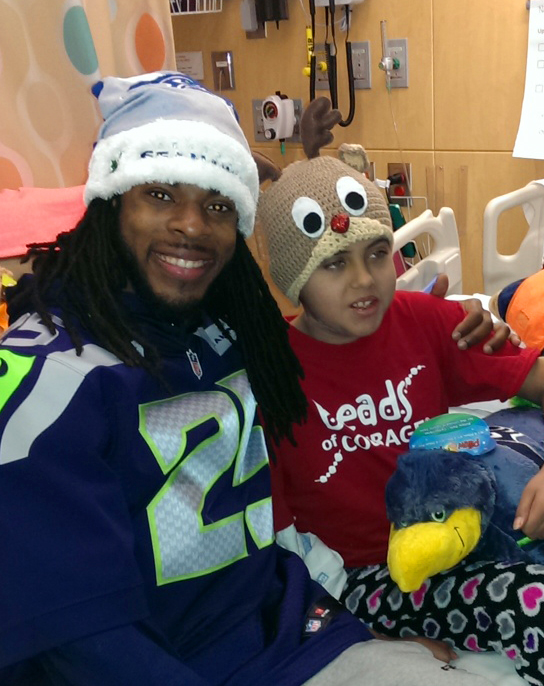 As Steve took out his phone, he started telling me about one of his colleagues. UW Police Officer Stefan Pentcholov and his daughter Athena have spent way too long at Seattle Children’s Hospital for a condition called severe aplastic anemia. It is with Officer Pentcholov’s permission that I share the photo above and the story of how a few special Seahawks helped during a very harrowing time for his brave 12-year old.

Aplastic anemia is a blood disorder in which the body’s bone marrow doesn’t make enough new blood cells. It is a serious condition. Athena’s best hope for recovery was through a bone marrow transplant, but the search for the right donor and certain other physical conditions had to be met prior to surgery. During her stay at Children’s, she was visited by Russell Wilson and his wife Ashton. While Athena had liked football before their visit, that special time with Russell and Ashton transformed her into a huge Seahawks fan.

With a bone marrow match found, and Athena’s physical condition stable, the operation took place on December 10, 2013. As she recovered over the holidays, she was also visited by Richard Sherman! He brought her a lucky Seahawk pillow and other team gear and cheered her up considerably. Richard also promised that her favorite team was going to make it to the Super Bowl.

Athena’s recovery progressed rapidly.  She was released from Children’s Hospital on Tuesday, January 21after a departing hug from nurses, doctors, and Ashton Wilson. Thankfully, Athena will be watching the Super Bowl at home and cheering on her favorite quarterback, cornerback, and team.

You can follow Athena and her journey on Instagram at President_ Athena. I am sure there will be new pics posted when Athena serves as the UW Police Department’s representative for the 2014 “Chief for a Day” event this coming August, and at a statewide law enforcement program celebrating the lives of children who have been diagnosed with a chronic or life-threatening illness.

Athena dubbed the date of her surgery December 10 as her “new birthday.” Happy belated birthday Athena and Go Hawks!

2 Thoughts on “Stumbling upon a Seahawk Inspiration Story”

Athena, great news that you are now home after your transplant. I too had Severe Aplastic Anemia and just celebrated my one year transplant anniversary January 29. I’m now healthy and it sounds like you’re doing really well also.

I’m just a “bit” older than you as I graduated from the UW in 1981, so my transplant was at UW Medical Center. You and I are incredibly lucky that Children’s, UW and Fred Hutch are so close by, because they really are the best qualified for doing bone marrow transplants & treating Aplastic Anemia.

As your transplant was more than 30 days ago, you will continue feeling better & better each week. I wish you all the best as you continue recovering from SAA.

For my daughter Athena- Thanking ALL for this incredible well written story of survival, strength and courage, thanking the Seahawks for making it happen and UWPD Command for doing their best for my family and my girl!