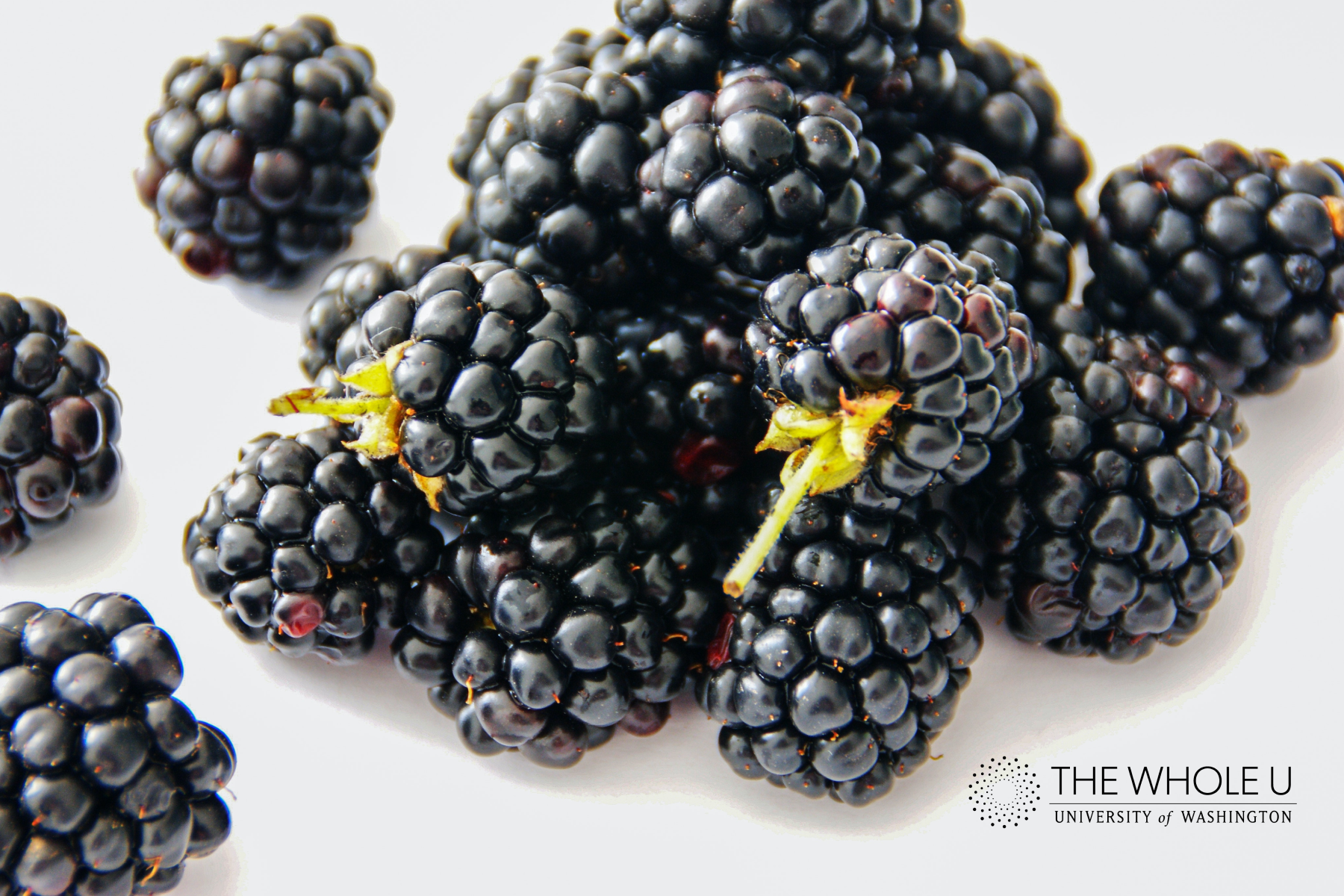 Note: This article is a reflection of the author’s first-hand experiences with berries of the Pacific Northwest and is intended as a starting point to get educated and not as a definitive guide. Unfortunately, we are not able to identify berries on a case-by-case basis at this time.

This summer, whether you’re on an intensive hike or just going for a walk down the street, you are bound to come across some berry bushes. Here in the Pacific Northwest, we are gifted with mild temperatures, rich soil, and lots of rain, which gives our native plant species a great environment to take root and flourish.

Growing up, I experienced berry bushes’ beauty and abundance first-hand at summer camp. There, we learned about nature, the woods, plants, animals, and conservation efforts and the camp instructor was always prepared to stop our group to point out a bunch of berries. There is nothing better in summer than picking some right from the bush. However, with so many varieties present in the Pacific Northwest, it can be difficult to know where to start, or which are okay to eat.

While foraging with caution is always recommended, we’ve compiled some basic guidelines for identification, best uses, and taste of some of the most common berries you might find the next time you talk a walk on the wild side.

Common Edible Berries of the Northwest 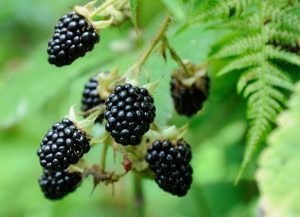 Color and shape: Black when mature; red and green when they are still growing. They are bumpy in shape (Beware of thorns on the plant).

Where to Find Them: These berries can be found in backyards and along roadsides across the country. Plants grows well in the sun and large patches are known as brambles. Highly invasive Himalayan and evergreen blackberry varieties are non-native European species that are highly invasive and difficult to control. Originally introduced for fruit production, they are now naturalized and widespread throughout the Pacific Northwest and are easy to spot by their large, vigorous, thicket-forming growth and sharp spines covering the stems. 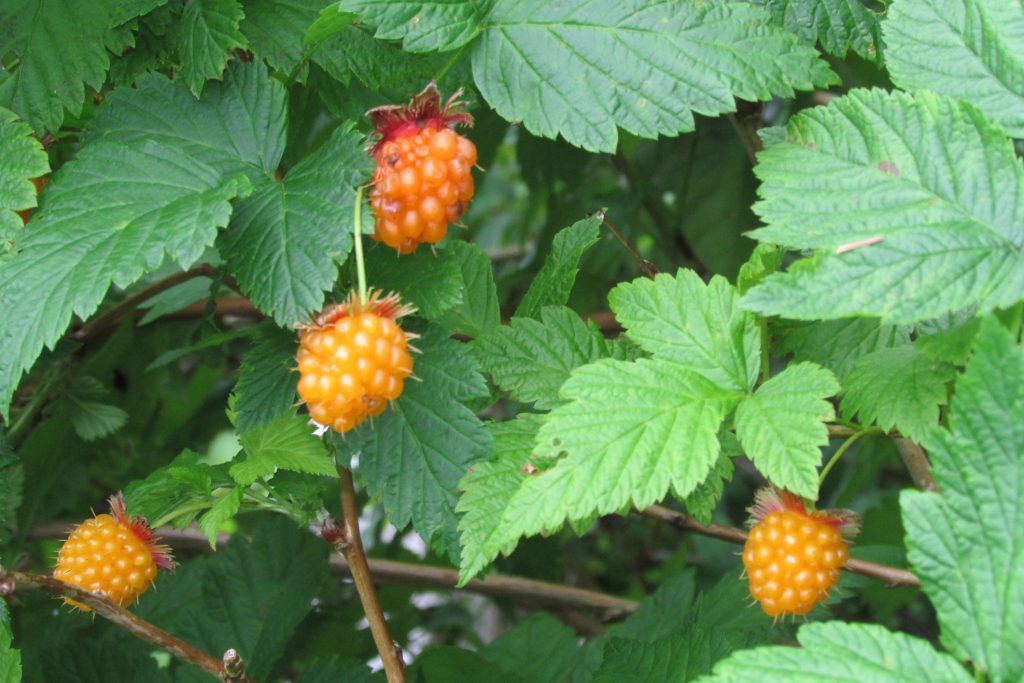 Origins: Native to the West coast of North America, salmonberries are traditionally eaten with salmon or salmon roe by Native Americans in the Pacific Northwest.

Color and shape: Mature berries are most commonly a yellow-orange. Younger berries may appear red. Berries are bumpy in shape, much like blackberries (Beware of the thorns on the plant).

Where to Find Them: The plant prefers moist, shady areas with a bit of sun and can commonly be found near creeks.

Peak Season: Salmonberries are best from early May to late July. 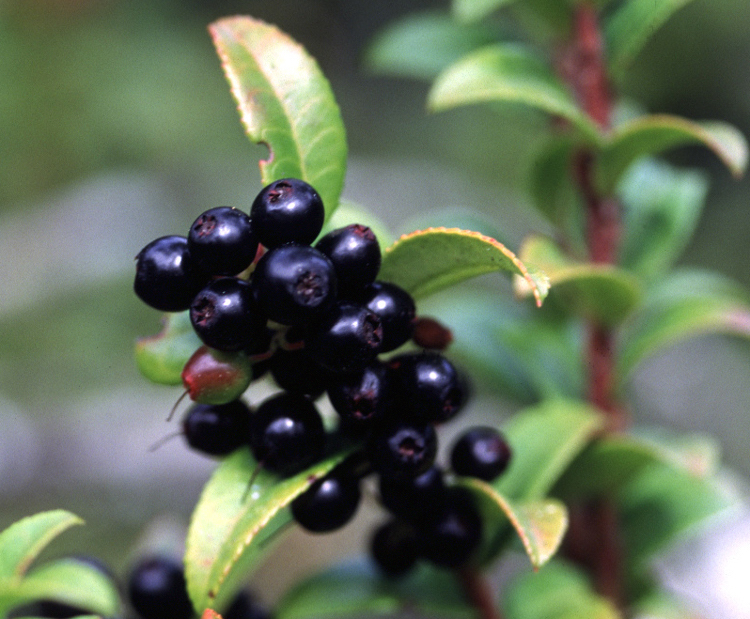 Origins: Native Americans in the Pacific Northwest are fond of this berry, often traveling long distances to gather them—eating them fresh or drying them into cakes.

Color and Shape: Mostly black but can appear bluish or purple, Huckleberries are smooth and round.

Where to Find Them: This shrub thrives mostly in the shade with some sun. It is common to find plants sprouting out of or near downed trees or stumps.

Peak Season: The plant is an evergreen shrub, but produces berries in the summer. 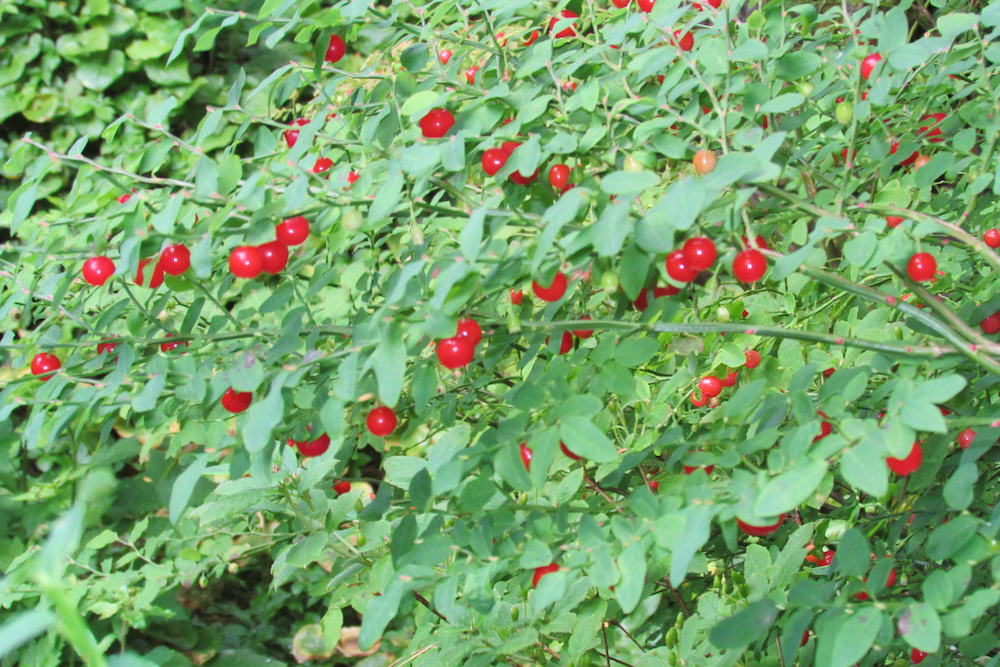 Origins: Native Americans in the Pacific Northwest eat this berry throughout the year—both fresh and dried, often using it as fish bait due to its resemblance to a salmon egg.

Color and shape: Pinkish red berries. They are smooth and round.

Where to Find Them: Similar to its relative the Evergreen Huckleberry, the Red Huckleberry can be found in moist, shady areas, often growing out of or near downed tree trunks or stumps. 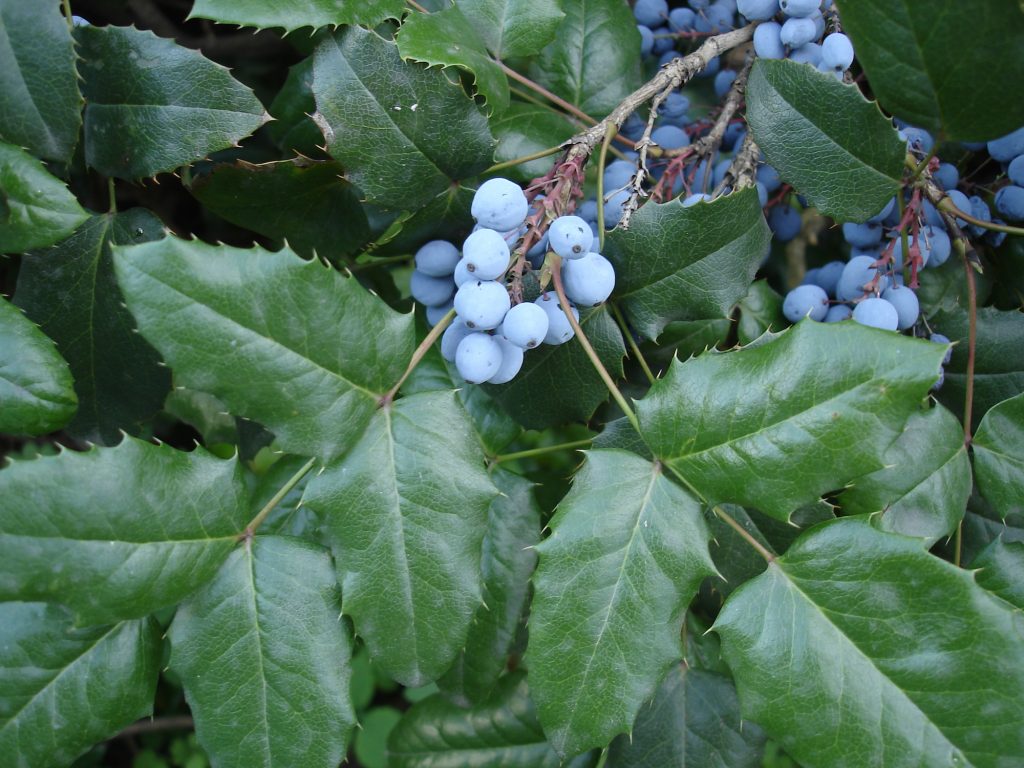 Origin: Native Americans in the Pacific Northwest have long eaten this berry, but often mix it with sweeter berries to better its flavor. These berries are also used for dye and medicinal purposes.

Color and shape: Blue/purple. They look and taste nothing like a grape. They are small, smooth, round, or slightly egg-shaped.

Where to Find Them: There are two types of Oregon Grape: the Tall Oregon Grape and the Low Oregon Grape. The Low can be found in relatively moist, open forests while the Tall can handle both dry open areas and moist shady areas. Native to western North America, it can be found from the Rocky Mountains all the way to the Pacific Coast.

Peak Season: The plant blooms in spring and produces berries in the summer.

Great in: Jelly or eaten as-is.

Caution: Consume in moderation, as these berries can be toxic in excess. 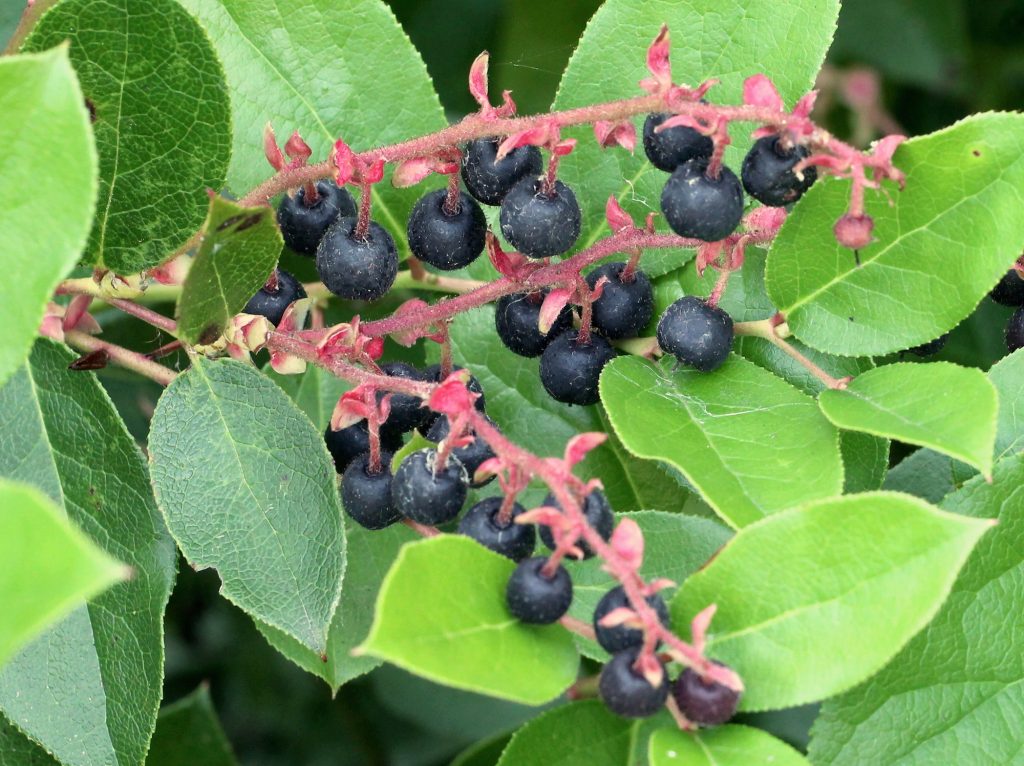 Origin: Eaten by Native Americans of the Pacific Northwest in combination with Oregon Grapes to sweeten them, Salal berries are often dried into cakes.

Color and shape: Dark blue, these berries are smooth and oval shaped.

Taste: Sweet with a mealy texture.

Where to Find Them: Salal plants grow anywhere in a variety of climates. They can do well in moist and shady areas and also in partial sun.

Great In: Jam and pies. 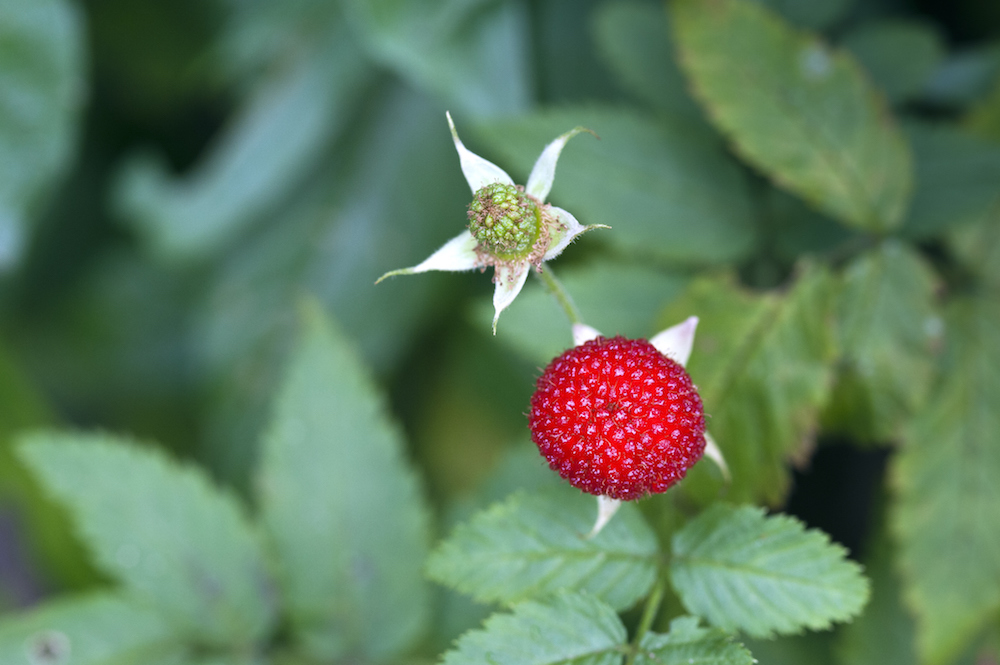 Origins: This plant ranges from Alaska down the west coast to north Mexico.

Color and Shape: Bright red when ripe, these berries resemble raspberries. The berries’ hollow shape gives them a resemblance to a thimble, although this plant has no prickles like its cousins. Expect a tart flavor when eaten.

Where to Find Them: Found along roadsides and the edges of clearings, it can be one of the first plants to grow after a fire or clear cut. They prefer shady, moist, and cool areas. 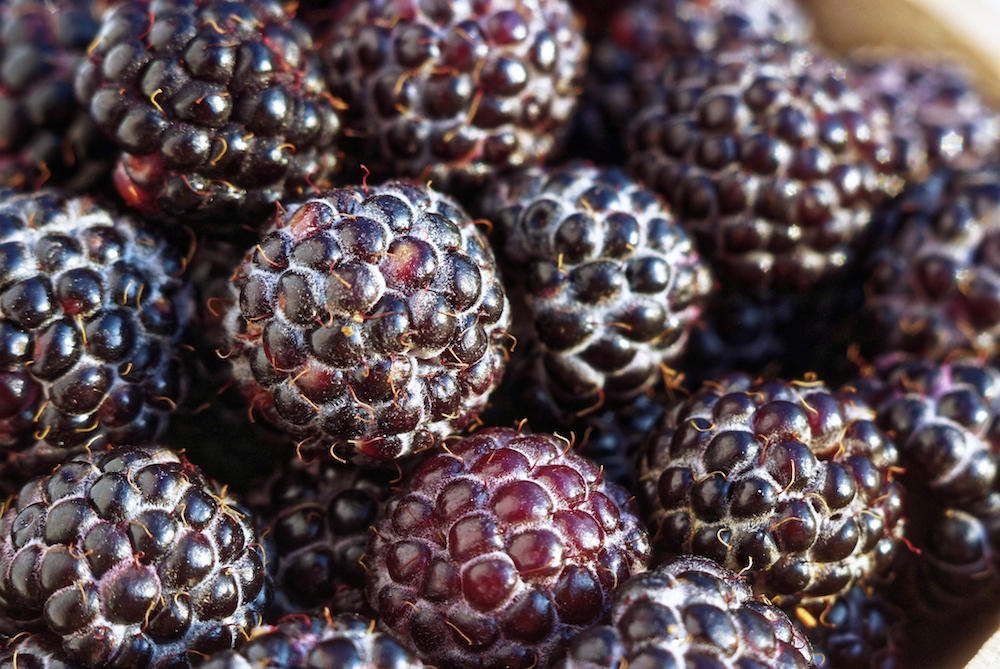 Origins: Also known as the Whitebark Raspberry, this plant’s range stretches from the Pacific Northwest to north Mexico.

Color and Shape: Similar in shape to a raspberry, unripe berries range in color from red to dark purple, growing darker as they ripen. A way to tell these berries apart from a regular blackberry is the core: blackberries have a white core, whereas a black raspberry is hollow in the middle like a regular raspberry. Black raspberries tend to be more “fuzzy” like raspberries instead of more smooth like blackberries.

Where to Find Them: Usually found in areas of sun to light shade in fields or wooded hills.

Common Toxic Berries of the Northwest 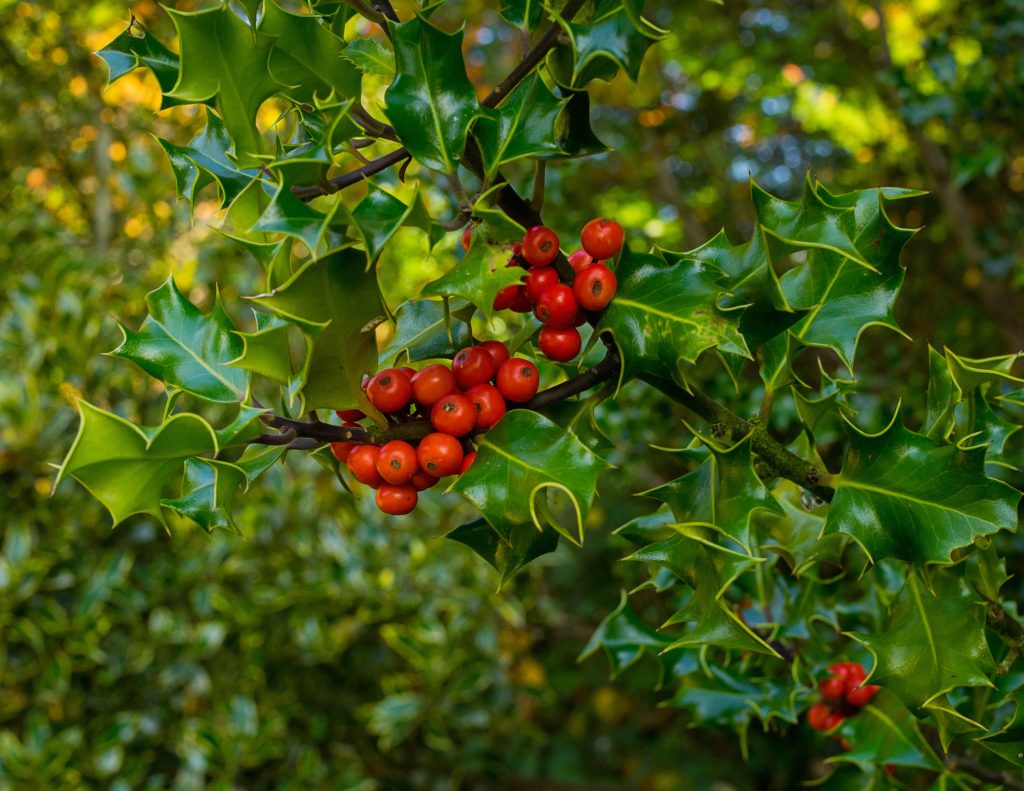 Origin: There are many varieties of Holly plant across the world, but one that’s commonly found in the Pacific Northwest is English Holly. Originally native to the British Isles (often used as a decorative shrub in gardens and popular during the Christmas holidays), this evergreen plant is an aggressively invasive species to the West Coast and is found in abundance across Washington stretching all the way to California.

Color and Shape: Bright red, round berries. The leaves are identifiably spiny.

Where to Find Them: This plant thrives in both sun and shade, growing into large thickets choking out native plant life.

Peak Season: The plant is evergreen and the berries ripen in winter.

Caution: Toxic to both humans and pets.

Can Be Confused With: Oregon grape as their leaves are similar. 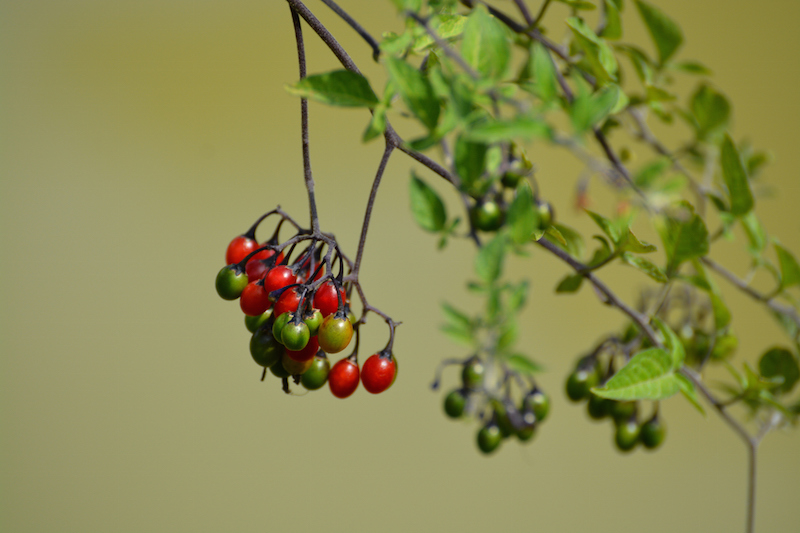 Color and Shape: Small, smooth, oval-shaped red berries, but can also be shades of green and orange when ripening.

Where to Find Them: Found mostly on the edge of empty fields, by roadsides, in backyards, and by streams due to its love of moist, shady areas.

Caution: Toxic to both humans and animals.

Can Be Confused With: Red huckleberry due to similar color and size. 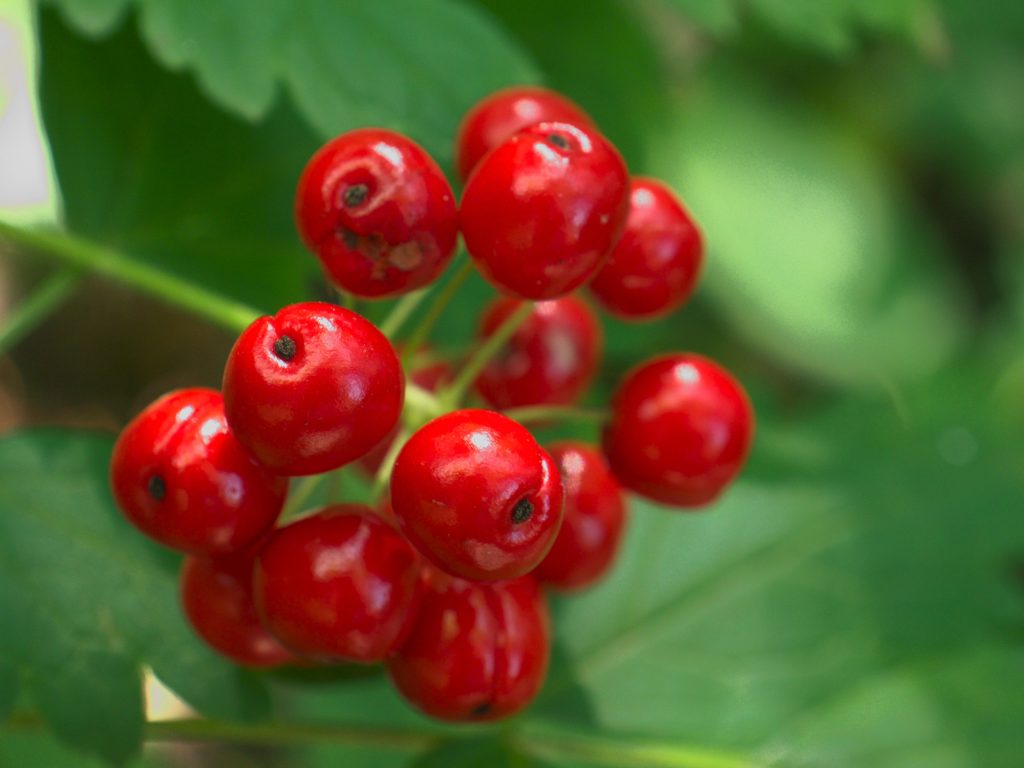 Origin: This plant is native to North America and can be found across the Pacific Northwest region.

Color and Shape: Shiny, red, and round, these berries often have a small black spot at the bottom of berry—a surefire sign to not consume it!

Where to Find Them: This plant is found most commonly in moist, shady areas, but can be found in dry slopes.

Caution: The plant is poisonous, but its berries are most toxic. Toxic to humans, it is also avoided by other types of wildlife.

Can Be Confused With: Red Huckleberry- similar in shape, color, and size.

As you enjoy the summer months here in the Pacific Northwest, be on the lookout for these berries in your outdoor adventures. Always remember, if you are not sure what the berry is, best to look it up first or avoid it altogether. Happy hiking!