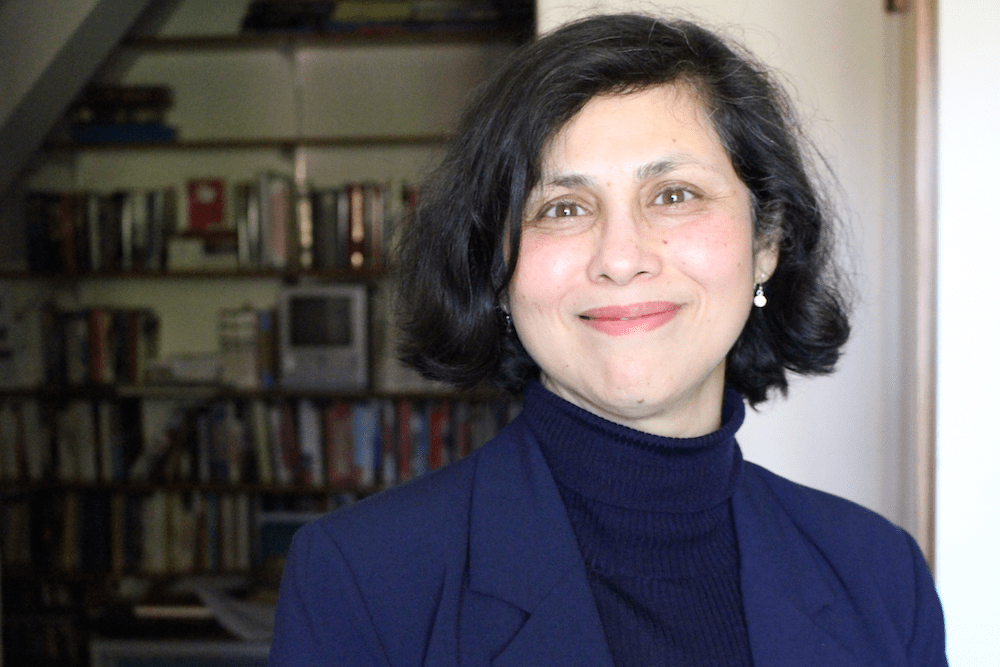 Should there ever be war in outer space, Saadia Pekkanen says there would be no winners.

“Nobody can win that war, because nobody knows what victory looks like in that scenario,” says Pekkanen, who since 2004 has served as Job and Gertrud Tamaki Endowed Professor at the Henry M. Jackson School of International Studies and specializes in outer space security, law, and policy with a regional focus on Japan and Asia.

Contrary to depictions of space war in popular culture, Pekkanen says plucky pilots or stealthy spies won’t be the ones that carry the day in the face of galactic aggression. Rather, diplomats and policy experts with feet firmly planted on Earth will be the ones to navigate a path to peace on earth—and above it.

“The most important thing I can tell you is it’s not clear which country—if any—is going to be able to shape everything in the new space race,” Pekkanen says. “We are back in a world where great power competition is on the table. The U.S. has declared space as a warfighting domain and thinks of both Russia and China as near-peer competitors in that game.”

Whereas past notions of space relations were defined by competition between U.S. and Soviet interests, Pekkanen says the new space race is now multi-polar and much more complex—what she describes as an interlocking triangle of democratization, commercialization, and militarization.

While traditional technologies such as satellites remain important pillars of space hardware, the next generation of big data and communications technology represents a new frontier in how nations engage in space—peacefully and otherwise.

The U.S. is the most disproportionately dependent on outer space assets. Of the over 2,200 or so operating satellites in space, more than 45% belong to the US. That dependence is also likely to increase with megaconstellations of satellites going into space, led by U.S. companies.

Pekkanen says the increasing development and deployment of assets such as anti-satellite missiles that can take out or damage rival’s assets means this new era might be best characterized as a volatile “counterspace race.” If it stays the course, propsects for peace are dim. But there’s still so much potential for understanding and collaboration. 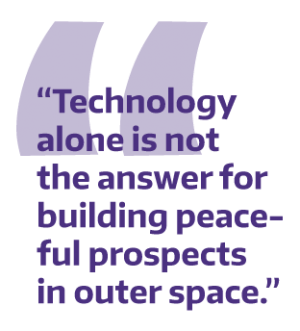 “If we can begin to educate people and raise public awareness about what is going on I’d like to help be part of the solution to move away from an outright conflict in space ,” she says.

“Technology alone is not the answer for building peaceful prospects in outer space; you’re going to need diplomacy and knowledge of other space powers in equal measure.”

In other words, affairs in outer space remain firmly grounded in the geopolitics on Earth.

“You have to be very aware of what’s going on in China, Russia, the United Arab Emirates, Israel, India, Pakistan, Brazil, South Africa, to name a few countries” Pekkanen says.

Indeed, the past decade has witnessed a lot of legislation at the national levels. Pekkanen stresses that the competing and intertwining nature of such agreements necessitates the development of policy experts who are capable of following the thread in their geopolitical context.

“If the US is going to be able to lead and engage diplomatically, politically, and militarily in the space domain, we need to know about these other countries,” Pekkanen says. “We need to train lawyers and area experts as we’ve always trained them, but we also want to add on a STEM competence that makes them cognizant they might have to apply all that knowledge in a whole different context.”

This belief that an integrated approach that accounts for policy contexts in different countries will deliver the best chance of shaping peaceful prospects in outer space is one of the reasons Pekkanen co-founded the Space Policy and Research Center (SPARC) with Kristi Morgansen, who now serves as chair of the UW Department of Astronautics and Aeronautics.

“We sat down and said, ‘We love what we do, but how can we bring our competencies together to distinguish what we are doing here at the University relative to all the things that are taking place in the U.S. and around the world?” Pekkanen says.

Launched in 2018 as a partnership of more than 40 UW faculty across STEM, law, business, and policy fields, SPARC seeks to position the UW as a hub for training what Pekkanen calls “the next generation of space professionals.” 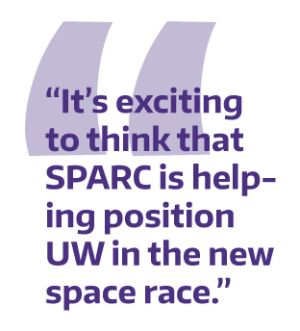 This conjunction of the fields of STEM and of law and policy is what will distinguish SPARC worldwide and to aerospace partners in the Pacific Northwest, Pekkanen says. The aim is to give STEM students the opportunity to take space law and policy classes and for regional and area studies students to have the chance to take STEM classes.

“Building an interdisciplinary program of teaching and research that’s cutting across STEM, but also law and policy is both challenging and exciting,” says Pekkanen, and her hope is that SPARC will one day offer a interdisciplinary concentration or certification program. This spring, Pekkanen is teaching Space Law & Policy, a class that runs across the Jackson School, Aeronautics and Astronautics, Earth and Space Sciences, and, soon, with the Law School.

The aim is to align SPARC with certain competencies that already exist within the University—such as control and autonomy or small satellites and propulsion, and legal and regional expertise—and have those thematic focuses bring together faculty who are working in those particular areas.

“We are mindful that we don’t have all the answers, but are actively learning from all the faculty involved,” Pekkanen says. “I think it has to be a process that’s grounded in the capabilities of our faculty and what we have at the UW and then connecting that to the capabilities in the region with the industries, industry associations, and other stakeholders.”

Last December, SPARC inaugurated a symposium series that will recur annually along a thematic basis. Last year’s focus was on autonomy and security.

“What that also allows us to do is to reach out to industries and the broader community here in the Pacific Northwest and get them to partner with us in training students and doing research,” Pekkanen says. “That not only connects our students and faculty, but brings in the community and industry that’s here in the search for peaceful solutions.”

For Pekkanen, success is found in the formation of that community. 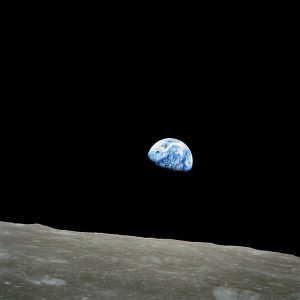 Growing up, Pekkanen hung a print of “Earthrise,” a photo taken by astronaut William Anders in 1968, above her desk.

“It’s exciting to think that SPARC is helping position the UW in the new space race,” she says. “Students of social sciences, humanities, policy, and law can make a difference. And I think that’s a difference worth making.”

Pekkanen was inspired to make a difference in the world by the famous photo “Earthrise” taken by astronaut William Anders in 1968 as Apollo 8 circled the moon.

“That was my image of what space is like,” says Pekkanen, who hung the photo above her desk wherever she lived as her father’s job as an official for the United Nations kept her family on the move.

Arriving at graduate school in the U.S., she expressed a desire to work on issues of space law and policy, but recalls initially being told by an advisor to “get real.” But Pekkanen kept up with the interest.

Learn more about the Space Policy and Research Center here.