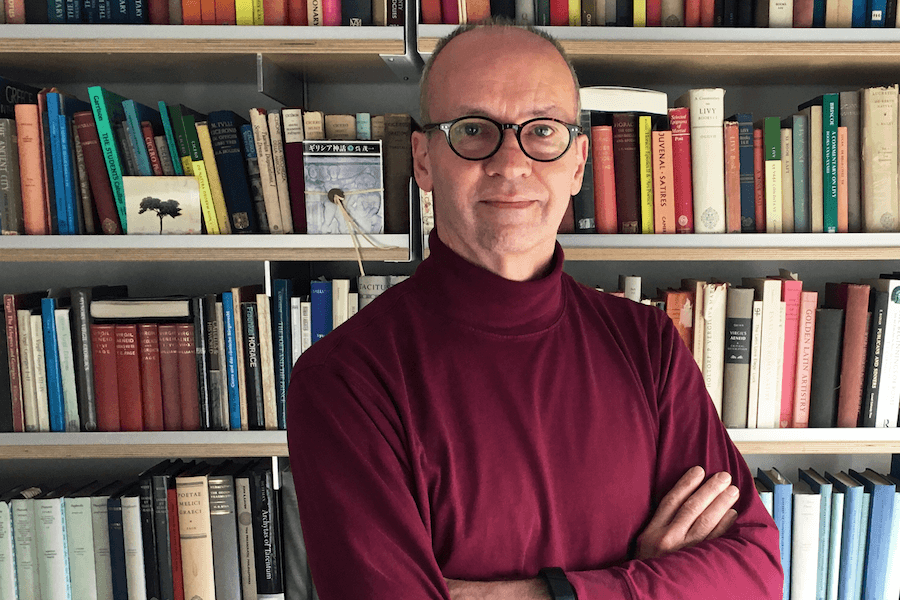 James Clauss admits he was never much of a student. That is, until he was given the opportunity to teach. Growing up in northeastern Pennsylvania, Clauss recalls being a “below average” student until high school, when, “in order to escape biology and chemistry,” he signed up to take two years of ancient Greek.

Much to his surprise, he found he was quite good at it—and Latin too. His newfound aptitude in both languages seemed to rub off on his efforts in other subjects. His once middling grades started to rise. 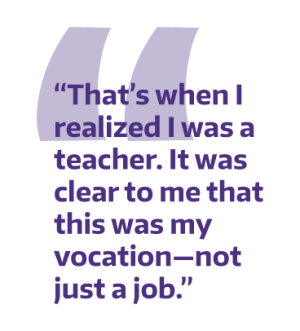 “That success [in Latin and Greek] really drew me into academic life,” Clauss says.

One day, during his junior year of high school, Clauss’s French teacher assigned him to lead a review section of Latin for freshmen. He remembers electing to focus the session on material he was least comfortable with on the notion that if he was going to present it, he’d have to truly master it.

“Two things happened,” he recalls. “For one, I learned how to study—study as if you’re going to teach it—and, number two, when I walked into the classroom, a switch went on and it’s never gone off.”

Clauss recounts time seeming to fly by as he led the group in the review, deploying humor and gestural flourishes throughout to augment and emphasize his points. “That’s when I realized I was a teacher,” he says. “It was clear to me that this was my vocation—not just a job.”

Today, Clauss serves as professor of Classics at the University of Washington. His “learn-as-though-to-teach” philosophy developed during that junior year review session still shapes his approach in the lecture hall—perhaps nowhere more so than in his course on Classical Mythology in Film.

Clauss began developing the course shortly after joining the UW faculty in response to a realization he’d had several years prior that he wasn’t entirely sure how to present films in a classroom context.

“Teaching mythology for the first time at Creighton University, I thought I’d be cool and show a movie that had come out a couple years before—The Clash of the Titans,” he explains. “I showed it to the class, but realized I didn’t know how to talk about it.”

In shaping the course, which analyzes significant differences between ancient literary and modern cinematographic representations of myths, Clauss had to plunge into his own perceived deficiencies in tackling the material. That mythic motif of katabasis—a Greek term for a challenging journey, most often a hero’s descent into the Underworld to die and be reborn—is one of the very concepts the course explores.

“With katabasis in particular—the fact that we see, time and again, people going through difficult periods and learning from them—that’s a meditation on life,’ Clauss says. “We all constantly go through these moments of crisis and gain from them; that’s how we grow up; that’s how we mature.”

The reason we keep returning to myth and myth-making, Clauss says, is that those stories are “hard-wired to our experiences.”

Two examples of katabasis in classical mythology involve the heroes Hercules and Odysseus who both succeeded in going to and returning from the Underworld: Hercules to fetch the three-headed guard dog Cerberus as one of his twelve labors and Odysseus to gain information from the shade of the dead prophet Tiresias.

But katabasis can also be understood as any journey or descent in search of understanding.

Clauss relates that students often come away from the course with an enhanced sense that they must and will go through tough times in order to reach their fullest potential; that a challenge is something to be met and surpassed and that ultimately makes them a better, stronger person.

Films in the course that feature the katabasis motif directly are Clash of the Titans, Hercules Unchained, Orphée and The Searchers. The Argonautic myth at work in Medea is also a katabasis insofar as Jason has to go to the end of the earth to fetch the golden fleece—the end of the world being where the ancient Greeks believed the gateway to the Underworld lay.

Clauss says his hope for the course is that students emerge able to watch films and read them more carefully—looking for universal narrative structures and then translating that ability into viewing the world through new eyes.

Their final project is to describe a film they would like to make based on a myth.

“I encourage students to consider exploring something of importance in their lives through their movie,” Clauss says, adding that he’s received a “wonderful” range of film ideas over the years.

“Students come to understand that mythology, when made into film, can be very powerful.”

When a director tackles a narrative whose structure parallels an ancient myth, the power of the original myth returns. Clauss cites, for example, the presence of a katabatic motif in the original Star Wars as an underlying reason for the film’s resonance and enduring popularity. 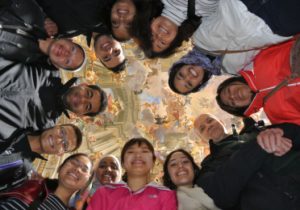 Clauss (bottom right) along with OMAD Rome students. “[This photo] represents me in my milieu,” he says. “With students in a circle, lacking a hierarchical order.”

It’s a side of cinema—and of classics—that often goes unseen.

But when students begin to think in ways that cause them to notice things they might have missed before, they’re even more likely to ask the question: “What is around me right now that I don’t see?”

Classical mythology then becomes a mirror for the modern age: a cipher for cracking current conundrums and a guide for navigating the present—and future.

“This class allows me to present students with a sense of optimism,” Clauss says. “Learning is difficult, but you move forward with it.”

“If classical myth teaches us anything, it’s that most of the time you come back from hell.”

James Clauss holds a B.A. from University of Scranton, an M.A. from Fordham University, and a Ph.D. from UC Berkeley.

I took Professor Clauss’s Mythology in flim course back in 1996. And its still my favorite class ever!!!