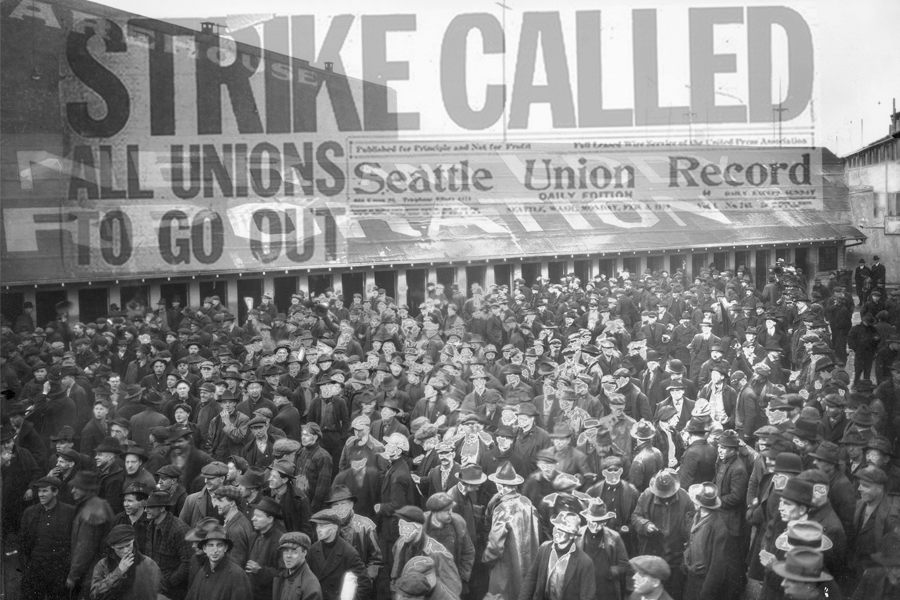 The Labor Archives of Washington will celebrate the 100th anniversary of the 1919 Seattle General Strike with a series of events over the next week, as well as a new library exhibit on campus. There will be book readings, documentary films, a bus tour and live performances and presentations at several locations from Feb. 2 through Feb. 9.

The Seattle General Strike was a five-day stoppage by some 65,000 workers beginning the morning of Feb. 6, 1919, just three months after the armistice that ended World War I. The strike began in the shipyards but soon nearly all of the city’s 110 local labor unions walked off their jobs in a show of unity. The strike, denounced by most local and national press at the time, lasted five days.

The Labor Archives of Washington, housed at the University of Washington curated by archivist Conor Casey, is joined in these events by many partners, including the UW’s Harry Bridges Center for Labor Studies, under the heading of Solidarity Centennial. The still-growing list of related events is online here.

Featured in the events is UW history professor James Gregory, who has written a new introduction and afterword — and contributed a photo essay — to the November republication by University of Washington Press of Robert L. Friedheim’s 1964 book, “The Seattle General Strike” in a “centennial edition.” Gregory will read from the book at 6 p.m. Feb. 4 at the University Book Store.

Gregory also collaborated with playwright Ed Mast, the Seattle Labor Chorus and the labor archives in creating an immersive performance piece titled “Labor Will Feed the People: Celebrating the Seattle General Strike Centennial,” a telling of these events through the voices of workers, politicians and others, with live music. The performance will be at 7 p.m. on Feb. 6 at Seattle’s Museum of History and Industry. An exhibit and audience activities will precede the performance, and a Q and A session will follow.

Gregory will be among the speakers at “Solidarity City: The 1919 Seattle General Strike and 100 Years of Worker Power,” the Labor Archives of Washington’s annual event. Other speakers are Nicole Grant of MLK Labor (formerly the MLK Jr. County Labor Council), historians and authors Dana Frank and Cal Winslow, and activist and author Jonathan Rosenblum. This will be from 1 to 5 p.m. Feb. 9 at the Seattle Labor Temple, 2800 First Ave.

Beginning on Feb. 4, the Labor Archives of Washington and UW Libraries will present an exhibit titled “The Legacy of the Seattle General Strike Era and the Centralia Tragedy of 1919” in the lobby and reference room of the Special Collections area and in Allen Library. In time, the exhibit will travel to other locations, and be presented as a website.

The Centralia Tragedy, also called the Centralia Massacre or the Armistice Day Riot, was a violent clash during an Armistice parade in that southwest Washington town on Nov. 11, 1919, that left six dead. The exhibit will offer multiple viewpoints on the events with documents, photographs and artifacts preserved by the participants, and will be on display until June 7.

Casey said there will be other events, and likely a separate library exhibit, later in the year, noting the November centennial pf the Centralia Tragedy.

“The year 1919 gave Seattle a reputation that has been reproduced by generations ever since,” Gregory wrote in the afterword to Friedheim’s history of the strike, “partly through the selective migration of people who know and appreciate the city’s labor and radical history and who think that something interesting may be happening in this far northwest corner of the United States.

“And that expectation becomes self-fulfilling as these newcomers fuel new waves of political activism, helping to renew the city’s reputation as a progressive and sometimes radical place, as the city of the General Strike.”

Other partners in Solidarity Central include the MLK Labor, the Museum of History and Industry, the Pacific Northwest Labor History Association, the Washington State Labor Council, Historylink.org, the Wing Luke Museum and many more.

This story originally appeared at UW News on January 14, 2019.