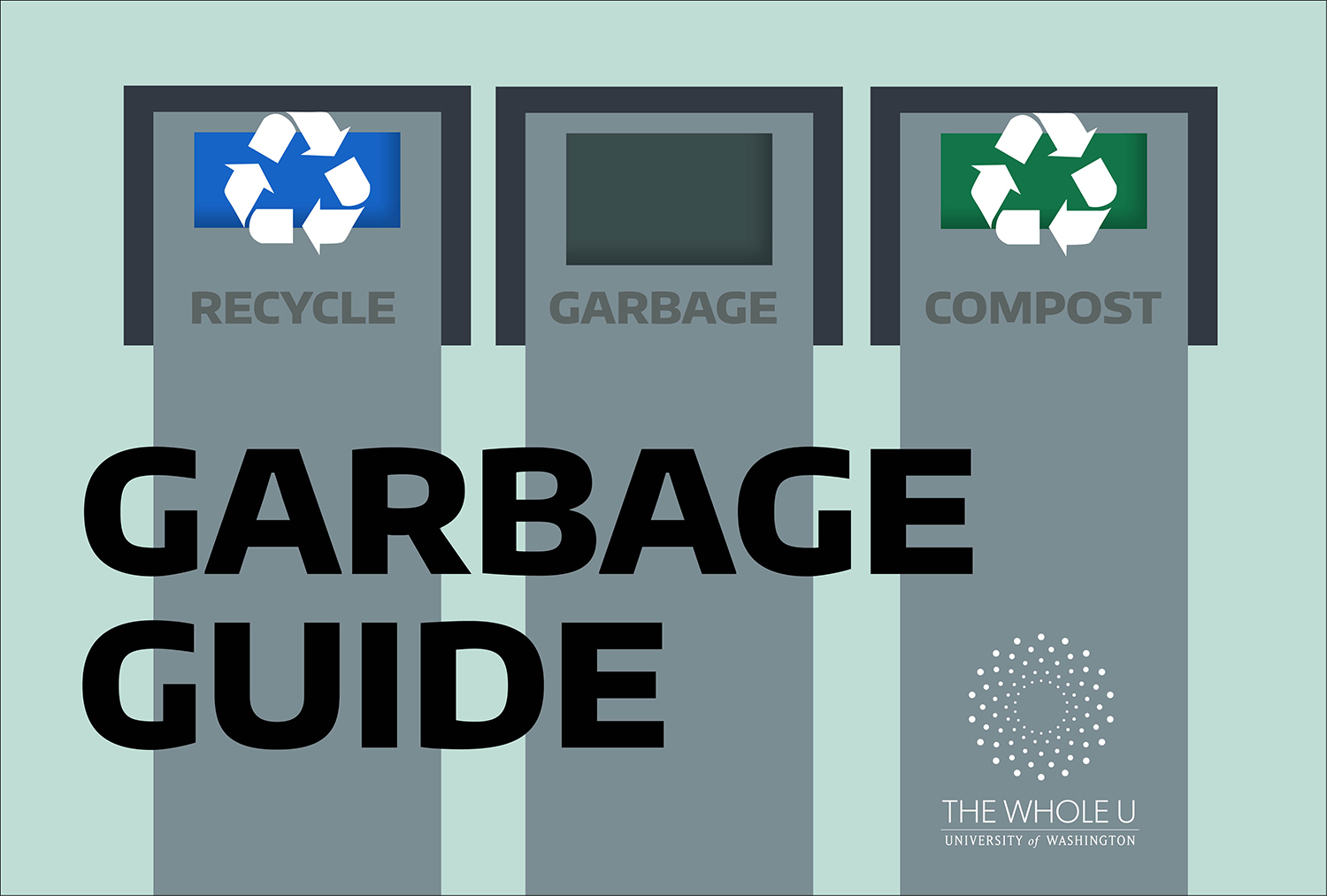 You’re standing in front of the waste receptacles with your hands full of trash. You want to avoid singlehandedly destroying the environment, but you’re also unsure of what to toss in the recycle, compost, or landfill-bound garbage bins. A group of people start to walk by you and seemingly sort their trash effortlessly. What?

We all have felt this confusion at one point or another, and unfortunately, there is no global rule when it comes to labeling waste receptacles or how to use them. A potential solution to the sorting situation would be to just reduce or reuse certain items, but when you need to recycle or have garbage that’s just plain garbage, it’s important to know how to dispose of it all in a way that Mother Nature can get on board with.

A popular alternative to just tossing your waste away, recycling can definitely be more challenging to sort out than your composting efforts. Recyclers usually require recyclables to be clean – something not many of us can usually say about our empty peanut butter jars – and some recycling facilities only take certain materials too, which often adds to the confusion. But there’s still a reason why the extra effort to recycle is worthwhile and has grown in popularity.

Liz Gignilliat, Interim Program Support Supervisor for UW Recycling, explained that while recycling isn’t the most sustainable option when compared to reducing and reusing items, it certainly outshines just tossing your waste in the garbage.

“Seattle’s garbage travels about 320 miles by train to a landfill in Eastern Oregon, and the cost per ton for UW to dispose of garbage is $145 per ton,” Gignilliat wrote in an email. “In contrast, our recycling and compost are hauled to local facilities. The cost per ton for mixed recycling is $0, and separated paper and cardboard can actually generate a rebate that goes towards the recycling program.”

UW Recycling efforts diverted 66% of campus waste from landfills in 2015 – over 600-tons more than in the 2010 fiscal year. The former trash that since has been identified as either compostable or recyclable material helped our community conserve energy equivalent to 727 American households’ annual energy consumption. It’s also reduced the same amount of pollution equivalent to taking 1,900 cars off the road for a full year, and reduced energy consumption equivalent to 1,177,294 gallons of gasoline or 54 railway cars full of coal.

Compost, recycling’s organic sibling, has also joined the battle for keeping nature natural, and can actually help agricultural efforts along the way. Farmers often use compost to improve the nutrient values in soil, increasing the yield and quality of their produce. Composting also reduces the amount of methane in our atmosphere – a greenhouse gas over 20 times more harmful than carbon dioxide – by diverting landfill-bound food waste so it doesn’t produce those harmful pollutants.

What do I do with this?

While composting generally follows the “food and food-soiled paper only” rule, a problem I run into most often is knowing which recyclables go where. You might have noticed the tiny numbers inside the recycling logo on your plastic cups and bottles, but not everyone knows what they mean.

Actually, those numbers signify the different types of plastics used to create that specific container, but for the most part, they’re for the recycling professionals to worry about. According to the Seattle Utilities website, Seattle doesn’t really use those numbers for recycling anyway, so you don’t have to worry. If you see a recycling logo, it’s probably safe to assume it belongs in the blue bins.

To clarify, here are some bare-bone basics that you can usually follow anywhere: 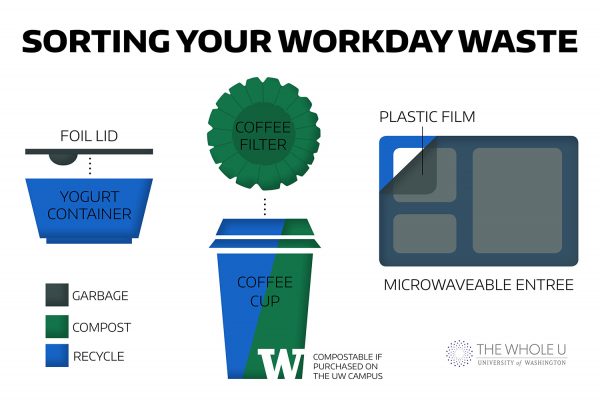 Printable garbage guide for your office or break room

Compost: Food, scraps from food, and wax-free or plastic-free paper with food on it all go in the (usually) green compost bins. (And if you’re on UW’s campus, those compostable plastic cups and utensils go there too – just make sure you see the compost label!)

Recycling: If it’s got a recycling logo, toss it into the recycling. Be sure to clean them first, with either a napkin (that you can later throw into the compost bin), or a small amount of water. As always, you can recycle clean paper, but don’t forget about your dry-cleaning and plastic shopping bags too!

It’s also important to remember that different types of recyclable materials shouldn’t always be lumped together, like plastic and glass bottles. Electronics often have different types of metals, fibers, and glass, so they need special treatment through e-cycling. Batteries also have unique recycling needs due to their potential toxicity after they die, and since a lot of tech gadgets now come with some sort of battery included, properly disposing of those materials is vital.

Ever wonder about caps and lids? Those are recyclable too, according to Seattle Utilities, but just make sure to keep the small ones attached to their bottles or cans. Anything cap or lid-like that’s bigger than three inches in diameter can be recycled on its own.

On campus, you actually have quite a few options for tossing your trash. In the HUB, there’s an e-cycle bin where you can drop your old tech and batteries, and all around campus you can find a trio of waste receptacles ready to take your trash, recyclables or compost-ready waste. In fact, UW Recycling has a pretty neat interactive map for you to use and find different resources available, including places to recycle.

Although some bins that accept recyclables are only labeled for paper and bottled waste, there’s a lot more that can be recycled. Basically anything that’s not hazardous, wet, or contaminated with food can be accepted into the recyclables; the only exceptions to the rule are small caps and lids, plastic (non-compostable) utensils, and candy wrappers. Just make sure glass, metals, and paper products are recycled separately unless the bin is labeled otherwise. Any time you want to recycle in bulk, however, like with books or boxes, you should find a waste container that will fit all of your items.

Of course, the preferred method is to reduce and reuse: reduce your lunchtime waste by packing your to-go meal in a glass or plastic food storage container or one that you can use again and again, like a lunchbox or bag.

If you find yourself in a confusing sorting situation and still don’t know what to do, check out Seattle Utilities item lookup tool that tells you where to dump your junk, including everything from styrofoam meat trays to antifreeze. You can also peruse UW Recycling’s handy list of resources so you know what to compost, toss in the trash, recycle, or reuse.

2 Thoughts on “What do I do with this? Let’s Talk Trash”

This is great! How about a nice one page printable of the graphic to put above bins in the break room? That would be handy….

That’s a great idea! We are working on creating one now and are planning to enhance it. Check back on Friday for the printable version to be included in the article.