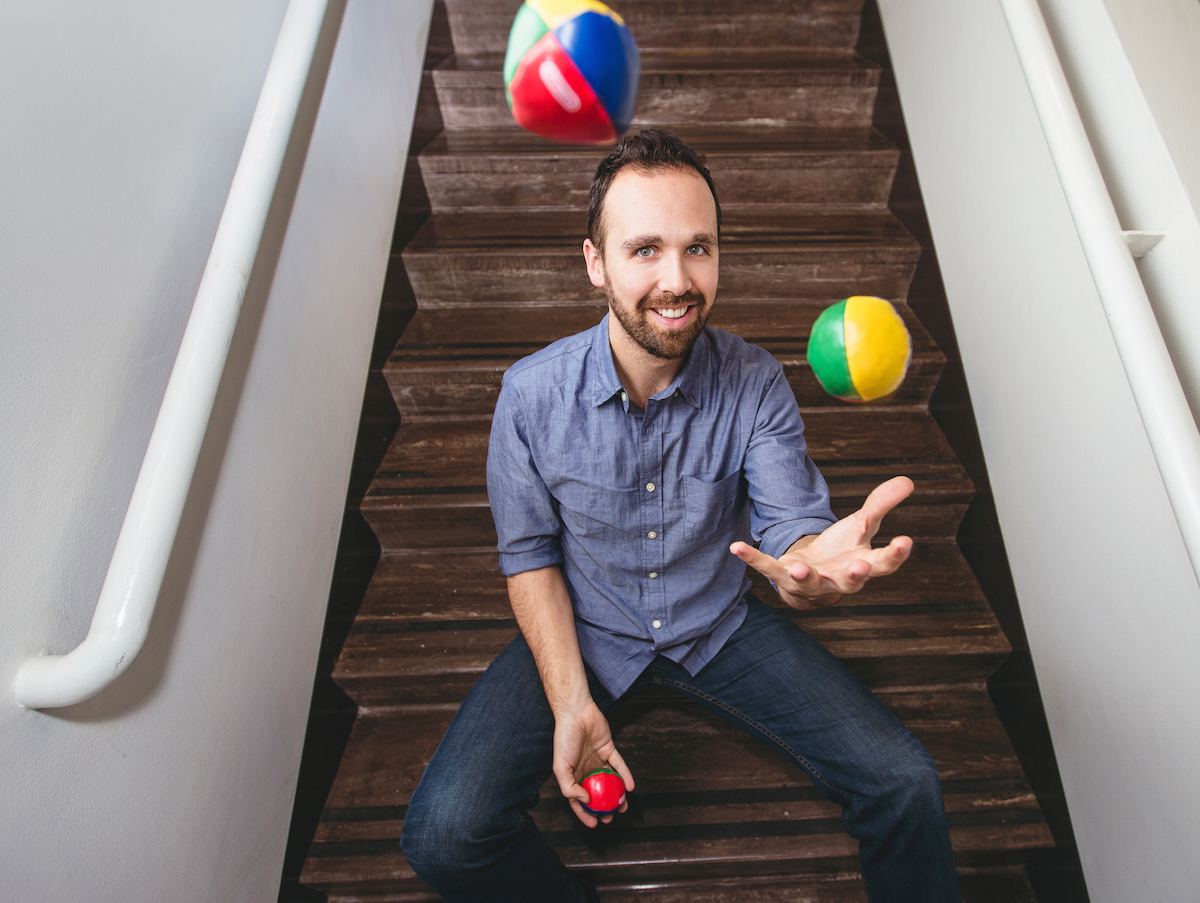 You know that moment when you can’t think of anything to say?

As a cast member at Jet City Improv in the U-District, Thompson specializes in creating something out of nothing. He’s had a knack for doing it since elementary school, when he took the stage for the first time. He was cast as a goat in a play.

“I actually remember being offended that I wasn’t given the lead role,” recalled Thompson, a communications specialist for the Joint Institute for the Study of the Atmosphere and Ocean.

At one point in the show, somebody forgot their line. Thompson seized the opening by making very loud goat noises, and the crowd cracked up. “That was my first moment of ‘improv,'” he said.

In high school he moved into bigger roles and became a self-proclaimed theater nerd. Still, he didn’t fancy himself a professional. There were times he didn’t even know his lines, he just crossed his fingers. But he loved doing it, and he’s honest about why he loved doing it.

“In high school, it was a way to get attention. People will tell you something else, but that’s what it is,” he said.

The attention wasn’t only from the audience: the stage is where he scored his first kiss. They were both freshmen, and they spent an entire rehearsal to get it right.

“It doesn’t really count, because it was an acting kiss,” he admitted. “It was on the lips, but it was a split second — it was totally minor. But to a freshman who had never had a kiss before, it was a big deal.”

That wasn’t the only dopamine rush. Most of the other cast members were seniors, so Thompson felt like he’d made the varsity team.

Still, he says he got jobs at theater companies after college. “People talk about, ‘You’re wasting your money getting a theater degree.’ You’re actually not,” he said. “There’s work out there.”

He thinks his drama background even helped him get a job at UW. His theory? It looks interesting on a resume.

“Every interview I’ve ever done, for any job, it has come up,” he said. “They wanted to at least chat about it. You’re not going to get the job because of it, but it makes you noticeable.”

Eventually he grew to like rehearsing more than performing. Rehearsals were fresh. Each time you got to do something different. You could mix up your lines, move in a new way, surprise your co-actors. You got to be the goat again.

“It’s an opportunity to not have to be serious — to be completely goofy,” he said. “That’s what I like about improv. It’s playtime. You get to play ridiculous characters and do things you’d never be able to get away with in your professional life.”

He signed up for classes at Jet City Improv in 2009 and joined the company a year later. He performs in about three shows a month. Some people in the company make their living as professional actors, but for Thompson it’s more of a hobby.

It’s also a way to give back. For the past four years, he’s taught improv classes to children at the King County Juvenile Detention Facility. When the kids get out of the facility, they’re invited to come see free shows or even apply for work at Jet City.

“It’s such a good way for them to have fun for an hour,” he said. “To laugh and to goof around in a way that isn’t at the expense of anybody else.”