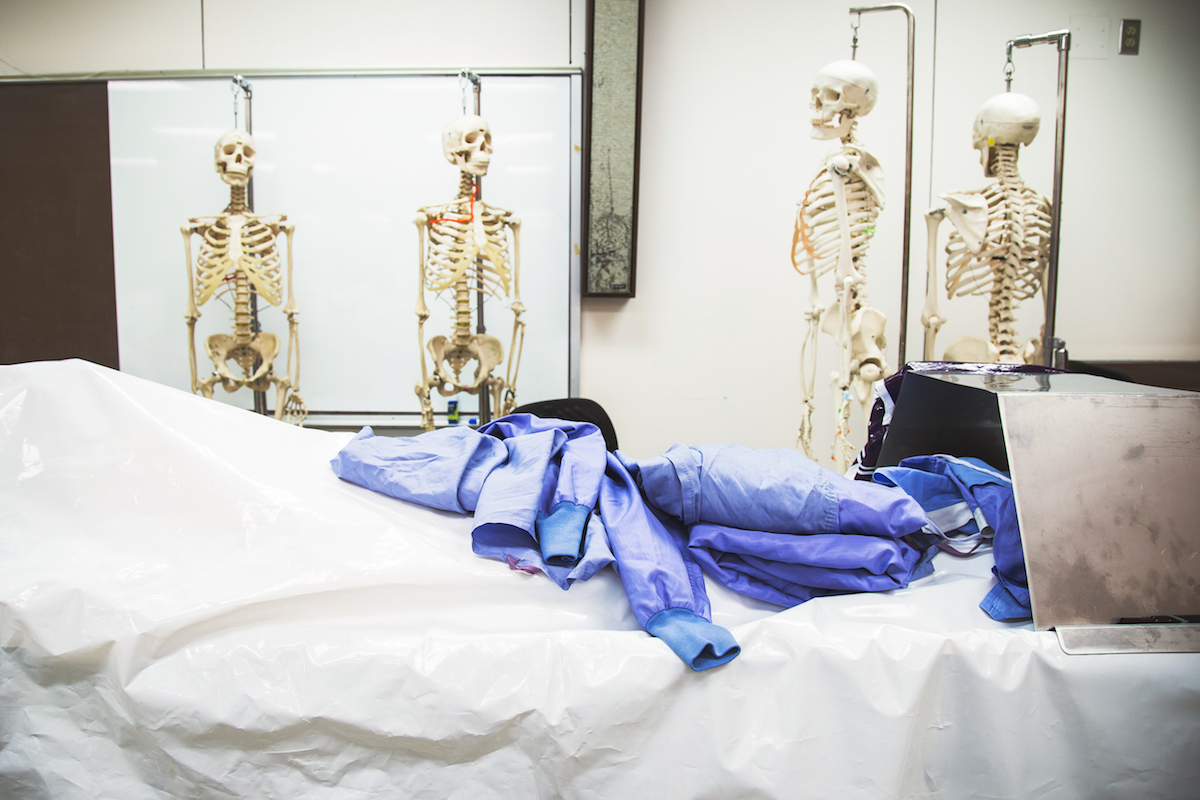 There’s more than one way to save a life after yours is over.

Organ donation might get all the buzz, but it’s not the only place to bequeath your body. A vital alternative: give it to science.

Every year, around 200 people who pass away in Washington become donors to UW’s Willed Body Program. Their corpses are the classrooms of future doctors, dentists, nurses, and other health care professionals.

The program, housed in the Department of Biological Structure, supplies cadavers to the School of Medicine, mainly for teaching purposes but also for medical research.

“For anyone to donate their body, it’s an act of huge generosity,” said Mavis Montgomery, operations manager at the Willed Body Program. “It’s priceless for the students to work on fresh tissue, as opposed to working on models or watching a video. They get to touch it, feel it, see what it looks like.”

Donors can enlist at any adult age or be willed by a next of kin after death. Most are in their 70s and above. The oldest ever was 104.

Death waits for no one, so the Willed Body Program operates 24 hours a day. They aim to get donors into the facility within 20 hours after death, and no later than a full day. “The sooner we get the body, the better,” Montgomery said.

Why the rush? Morgue technicians have a limited window to embalm donors, a process that prevents natural decomposition.

Quick removals are also practical. Nursing homes often want to clear rooms, and if a death occurs at home, people might not be comfortable with a loved one lingering around after death. “On the flip side,” Montgomery added, “a lot of people are. They’ll say, ‘Can we have you not come pick up the body for a while?’ We want to accommodate everyone.”

The bodies are picked up by mortuary professionals. “I’ve had a few people who wanted to bring in the deceased on their own, in their car,” Montgomery said. “You cannot do that.”

As the liaison between families and the program, Montgomery consults with prospective donors. After they die, she fields calls from next of kin.

“They want to tell you the last 20 years of how they were with their spouse — how they drank coffee, all these cute little things,” she said. “They’re mourning.”

She recalled a story of one woman who reached out several times after her husband had been donated, worried that he was “on a gurney, in the dark, in a corner somewhere.”

“I let her know that he was in a facility with other cadavers, and there’s lights in there, and he’s treated with so much respect,” Montgomery said. “I was trying to think of anything to comfort her, because she was crying. And in the inside, I was crying with her.” 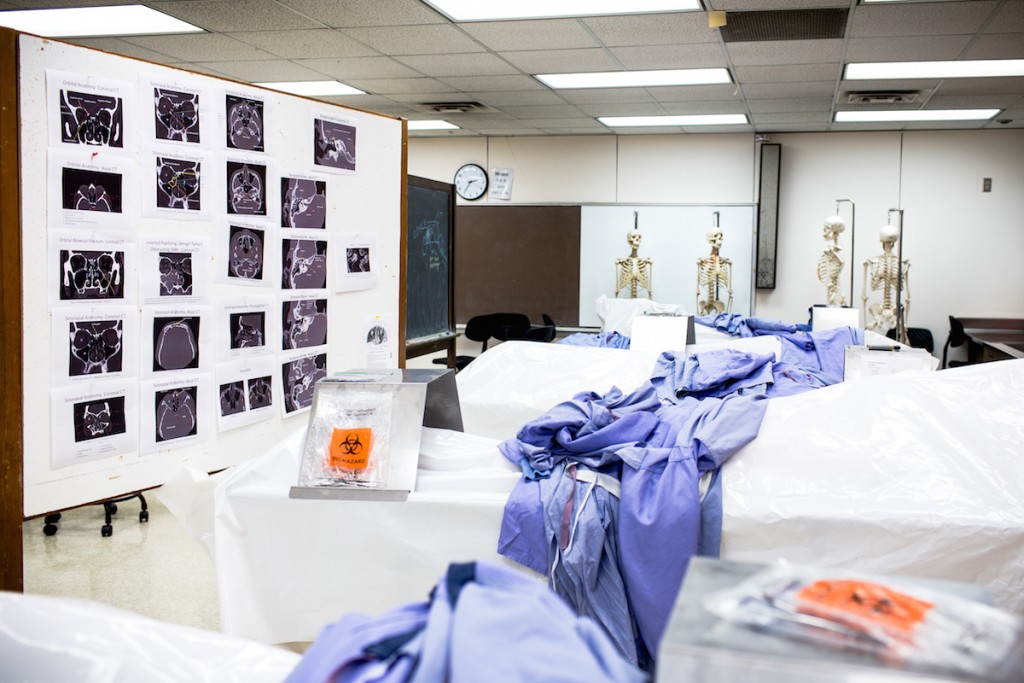 The lab, located on the 6th floor of the Health Sciences Building, is a bit chilly (65 degrees) with a faint chemical odor. Two dozen anonymous cadavers, draped in white sheets, become “patients” for classes of 100 students.

Dr. John I. Clark, the director of the Willed Body Program, predicts that demand for donations will grow as affordable health care expands. Hands-on anatomy is crucial not just for doctors and dentists, but for medical staff at all levels. “The more anatomy those people know, the more effective they are, because anatomy is the language of medicine,” Clark said. “It’s the foundation of medicine.”

Besides basic anatomy, donors end up in classes about neuroanatomy, embryology, dentistry, nursing, and physical and occupational therapy. Sometimes they’re used for medical research, such as outfitting pacemakers or studying specific regions like hips or knees.

It’s difficult for Clark to imagine the School of Medicine without the Willed Body Program. “It would probably be a failure,” he said. “When a patient goes to their doctor, they expect the doctor to know where the heart is, where the pancreas is.”

He gestured to his wrist.

“If they’re taking your pulse, and there’s something unusual about it, it could either be central — a cardiovascular problem — or it could be an injury in your arm along the way,” he said. “Clinicians need to know the systemic organization of the body.”

You can’t learn this 3D landscape from a textbook — not yet, at least. And even if you could, a virtual tour can’t prepare you for exploring it in the flesh. A good number of UW medical students were non-science majors who probably haven’t seen a dead body, or even a lab animal.

That’s why there’s an orientation a few days before the first dissection lab begins. Huddled around their assigned donors, students lift up the sheets and take in the scene for a few minutes. “They have time to process what to expect before the first class,” Clark said. “It helps reduce anxiety.” 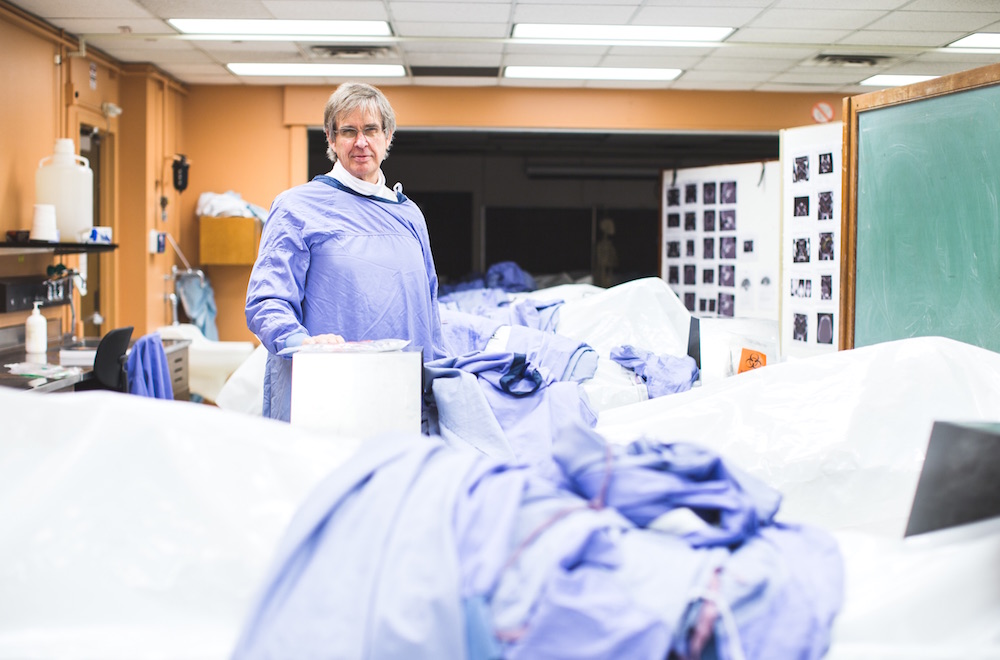 Donors circulate from classroom to classroom for up to three years. Some are finished with research in as quick as a month. No matter the time period, Montgomery said, “they were still used for something extremely valuable.” Donors are cremated once out of the program, then either returned to the family or buried in a community UW gravesite.

Each fall, Clark officiates a ceremony to honor the donors and thank their loved ones. It’s a nondenominational service that includes poems, prayers, and songs. Family members share memories.

Anatomy students attend a separate memorial service, but Clark plans to integrate the two ceremonies in the future, something done at other medical schools. “Every student gains so much from that,” he said. “They want to let the families know how important the body donor was to their education.”

And then there’s the question of what the donors themselves get out of it. It’s only natural to be a little disturbed by the thought of being sliced open and studied. Why not just go gently into the night?

For many donors, Clark said there’s a fulfillment in knowing where you’re going — in giving your body a life after death.

“My generation, which is the ‘60s generation, thought they could change the world,” he said. “They still think that. Many of them don’t see the value of being interred in a cemetery, in a grave, when they can contribute to the future.”

For more information about the Willed Body Program, visit wbp.biostr.washington.edu or call 206-543-1860.