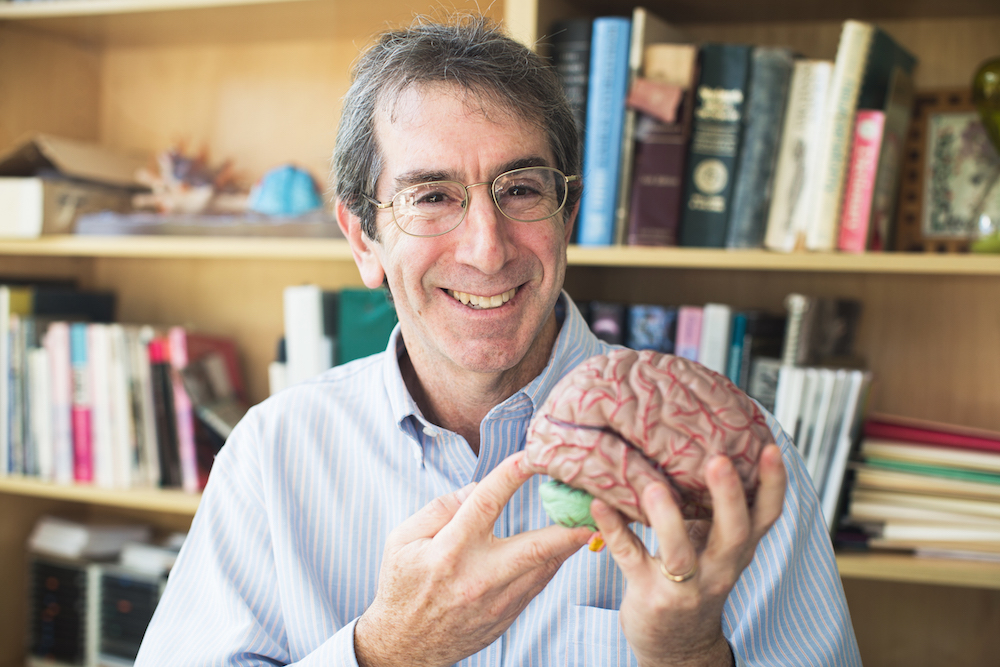 Dr. Eric Chudler gestures to a plastic tub in the corner of his office. “I got a human brain in there,” he says, then walks over and pops open the lid.

Stashed inside are jars of cerebral matter that Chudler, a research associate professor in the Department of Bioengineering, has collected over the years. The big blue container houses nerve tissue not just from a human but from a cow and a cat and a monkey. And a fish and a frog and a sheep and a snake.

He pulls out a sheet with pictures of the six non-human animals, then issues me a challenge: Match the brain to the animal. I guess wrong four times in a row (cow brains are bigger than you’d think).

This style of hands-on instruction has made Chudler a hit with middle schoolers in Seattle. In the late 1990s, he received a grant to build a website called Neuroscience for Kids, which has brain games, coloring books, memory and learning drills, and even songs like “I’ve Been Working On My Neurons.”

Chudler then holds up a dried slice of human brain in a plastic bag. “This is on loan to me from the University of Michigan,” he says.

I notice that the tissue appears to have a distinctive pattern. “Is the brain like a fingerprint at all?” I ask. “Can you tell whose it is by looking at it?”

“Actually, a kid asked me that same question once,” he answers. I laugh nervously, unsure about what that means for my brain.

“Everyone has the same general pattern of folds, but every brain is different,” he says. “No two brains are alike.”

Since 2011, Chudler has been the executive director of UW’s Center for Sensorimotor Neural Engineering. He no longer has funding for his website, but he still makes classroom visits to teach kids in person. He also hosts a show for middle schoolers on UWTV called BrainWorks. And for the past four summers, he’s invited teachers to the UW campus for a program called Sowing the Seeds of Neuroscience, which provides a fun and engaging science curriculum for middle school classrooms.

“We’re translating what we find out in the lab to materials that teachers and kids can learn in the classroom,” he says, then notes that they even ship worms and cockroaches to the classes.

Kids get to have all the fun, huh? Not so fast. On November 19, Chudler will present about the brain at a Whole U seminar called Journey Into the Brain. You’ll learn how the mind works and explore some common brain-related myths, such as:

1) If you rock out too hard to music, you’ll lose all your brain cells. This one is a big exaggeration, but it’s founded in some truth. Humans are born with about 100 billion nerve cells, and each day you lose thousands of them — permanently. “You’ve got billions, so losing a few thousand cells isn’t a big deal,” Chudler says.

2) We only use 10% of our brain. This stubborn myth is the basis for recent Hollywood films like Limitless (2011) and Lucy (2014). When people bring this up to Chudler, he asks them if they would consent to having 90% of their brain removed. Their answer, invariably, is no. That’s because the brain is responsible for all sorts of unconscious actions, such as heart rate and respiration, and losing a chunk of it would be crippling. Besides, learning new things doesn’t involve tapping into unused areas of the brain. “Rather, you’re making newer or stronger connections between existing parts,” Chudler says. “You’re rewiring the brain.”

3) When the full moon is out, there are more murders, suicides, and traffic accidents. Chudler actually wrote a paper about this one. “You can go to the police blotter and correlate it to the phase of the moon,” he says. “In almost all cases, you don’t see a correlation.” The physics of this myth also don’t work out: “The gravitational pull of a mosquito landing on your shoulder is stronger than the gravitational pull of the moon.”

4) Dinosaurs had a second brain. Nope, but they did have big spinal cords, which they needed to control their massive legs. “In the spinal cord, cells control those legs,” Chudler says. “It looked like a brain, but it’s not a brain — it’s just a lot of cells to control the big muscles.”

Want to learn more? Stop by the HUB on November 19!

2 Thoughts on “Journey Inside the Brain with Dr. Eric Chudler”

I’m a bit confused about how the incident angle of sunlight on the moon relates to the moon’s gravitational pull, but I’m always willing to learn new things. Also, glad to see the 10% myth was mentioned. That one deserves a permanent vacation.

Here is a good report about the “Lunar Effect” from The Skeptic’s Dictionary: