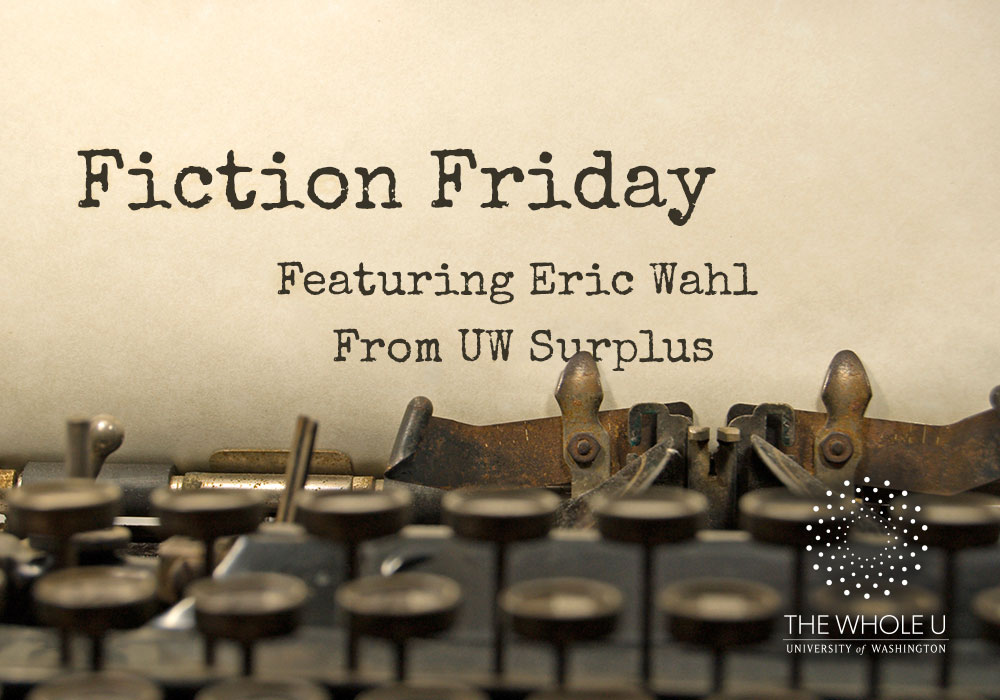 November is National Novel Writing Month, so we invited a few faculty and staff members to share their fiction with us. Eric Wahl was a natural choice because he’s famous for the captions he writes for UW Surplus and he has a Master’s of Fine Arts in Creative Writing. This is an original piece he wrote for The Whole U:

The main part of my job is painting grey rectangles. You sure don’t need an art degree to do this, but I have one, which some people think is funny in that way that you can tell on their faces they aren’t sure if they should say. I work for the city. I have daily location calls, rain or shine—although if we’re having a Biblical deluge I’m at a desk mapping out itineraries based on a backlog of reports from angry business owners, upset neighbors, and/or anonymous tipsters. Sometimes I work with the police, and this can be fun if the cooperating officer has a sense of humor about what I like to call “bustin’ perps,” but sometimes you get a sourpuss who’s all business. Not that there’s so much wrong with an all-business attitude; I just can’t get out of bed without making sure I take time to laugh about the relative absurdities of the world. And let’s face it, the world dares you to laugh at its absurdities every single day, so why not?

Reconciling an art degree with painting over graffiti isn’t the dilemma you’d think. I’m not covering up Caravaggios out here. It’s mainly punk kids—sure, a lot from poor neighborhoods, but just as many from the suburbs, where art’s considered good if it goes with your couch. Most of what I cover up runs 50-50 between nearly indecipherable spray-can tags and drunken expletives about ex-girlfriends and boyfriends. But it’s all about power, leaving your mark, you know? Napoleon’s army scratched their names into Egyptian monuments after all. If you can’t be a Rockefeller, you can be a RanierBooty29 or Donky-J. Either way, it’s like dogs whizzing on trees, except the dogs haven’t read “Ozymandius.” “I was here!” I guess it’s presumptuous to think RanierBooty29 has read romantic poetry, too, but you never know. If some genius spray-paints “Screw the Timbers!” along a city bridge, it’s going to get a nice grey rectangle over it. It’s a great job, really, calming, in fact.

Every once in a while I’m asked to paint over something interesting, something that at least some thought went into, so I’ll take a photo first. On a wall near the zoo someone painted a T-Rex with feathers all over it, which is funny if you know that birds are dinosaurs (look it up), so I took a photo before the grey paint rolled over it with the reassuring regularity of the tides. On the side of a public health building one morning was a big painted pot leaf clearly wearing a pair of Mary Janes; I took a photo of that one, too. It occurred to me somebody should do a gallery show of some of these things, but that could be weird—photos of somebody else’s stuff that no longer exists because the photographer got rid of it. But life is like that if you think about it. One day we’ll no longer exist, too. A photo could be the only remaining evidence we were here if we’re not an artist or a Rockefeller, or a major criminal.

What if we had our very own Banksy right here in town? Well, I figure enough people already know about Banksy that they’d be honored to discover stuff like that on their property, right? They’d be auctioning off their own walls and doors through Christie’s or something, just get a chisel and a saw! Then again, as a test or a joke, Banksy sold his stuff at a kiosk in Central Park for practically nothing last year, and most people walked past it or didn’t realize the stuff wasn’t all knock-offs. Luckily, I know I haven’t painted over anything like that, although I do wonder about the city painters who came before me. What’s lurking underneath their layers of grey? I hope some of them somewhere took photos, too. We’ve all got stuff going on beneath our grey.

Then some officious citizen had the same photo idea I had but contacted the cops with a mind to catalogue tags and match work to particular perps. Here I was taking pix of stuff I thought was kind of not terrible, but the cops were taking pix to bust perps. Can’t blame ‘em; it’s what they do. People have to transgress the right ways, etc. Someone has been tagging walls with, hold on to your bloomers, paintings of flowers. Big ones, small ones, Georgia O’Keefe ones, and tiny pixie ones, all over the place. Not exactly earth shattering subterfuge, but when it shows up where it’s not supposed to be, I eventually get the call, or in this case the email, with multiple photo attachments. And I realize, upon seeing a yellow flower, I have seen this perp, and she is about 100 years old.

For real, I saw her; I even talked to her, although I guess it was more like she yelled at me. It’s not the first time people have yelled at me; I work for the city after all. I was out on a job early one morning, rolling a nice even dark grey over some recently spray-painted random misspelled vulgarities on a ramp-way wall, and I saw elderly Ms. Thing sitting on a grocery crate with her little paint set and her gigantic Carey Donovan glasses, and she was noodling away at the wall of the old shop just down the way from me, and I honestly figured she was the business owner, or the business owner’s grandma or something.

“What are you doing there?” she yelled at me, a painted hand up to her glasses.

I’ve got my orange reflective vest on and my rollers in hand, but I’m nice and said good morning the way people should and that I’m cleaning up some graffiti on the wall right here. “Nice flower,” I added.

“You gonna’ ‘clean it up,’ too?” she said, real accusatory-like.

I went back to my rollering, and Granny Perp stepped back from her own work, seemingly satisfied, and then she screamed at me: “Do you feel a sense of accomplishment walking away from a wall onto which you’ve just left grey rectangles?”

I managed to say, “What?” and then she said, “Blank shapes that remind everyone something used to be there?”

It started to rain as I tried to think of the right thing to say—a bus went by—and before I knew it she wasn’t there anymore, so maybe I was standing there longer than I thought I was. But I remember taking a picture of her yellow flower that day just because, and now she’s some menace, so she was probably a crazy person. I went by a week later and asked the business owner about the lady and the flower; he had no idea who she was. “Eh, leave it there,” the business owner said, bemused. “Is she the one who signed your grey rectangle, too?” he asked, pointing just ahead. I walked over to where I’d been working last week and saw “R. Mutt” in the bottom right corner of the rectangle, and I can’t decide if I’ve got a nemesis now or a guardian angel, and I realized I was laughing anyway.

Thanks to Eric for brightening our day with a piece of short fiction! Reactions? Please share in the comments below. 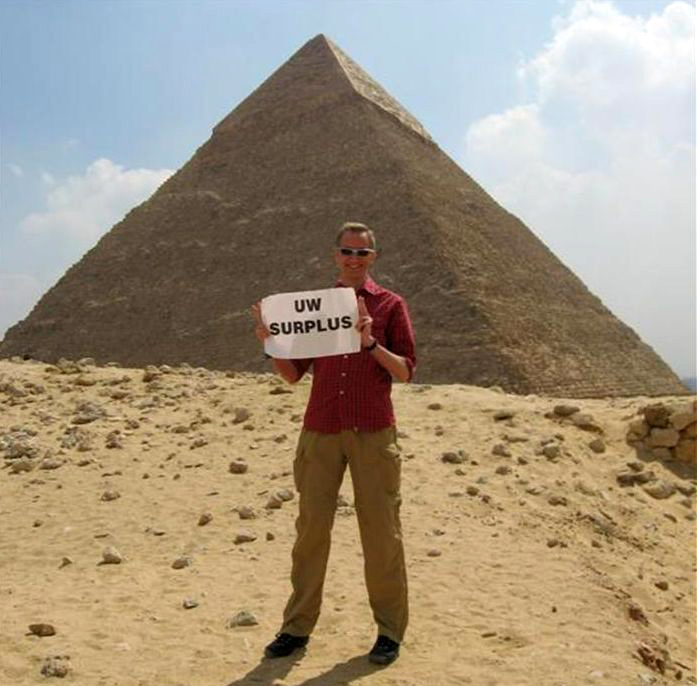 Wonderful story. It is setting up residence in me. Thank you for sharing this!

Loved this! Fun way to start the day.