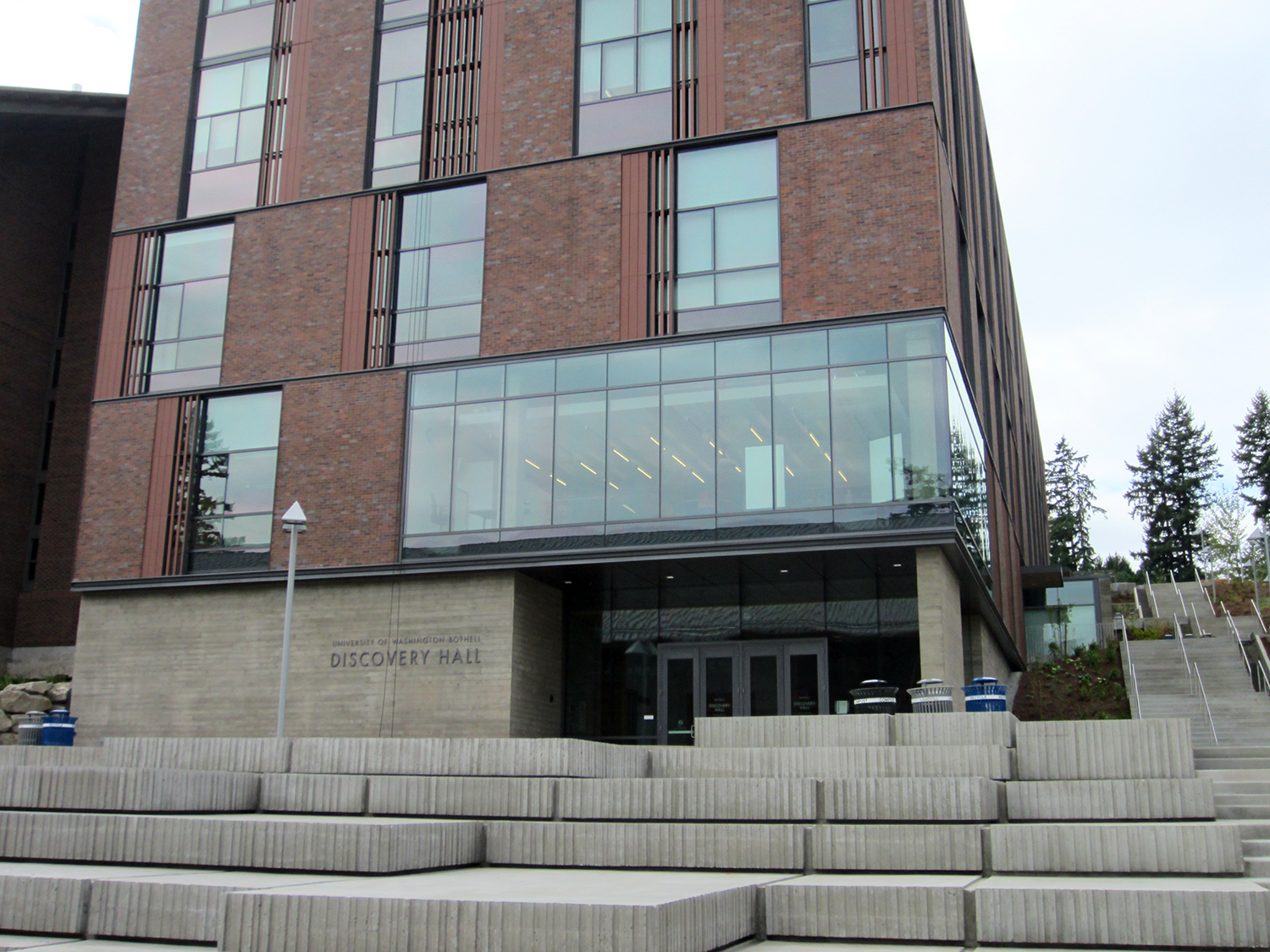 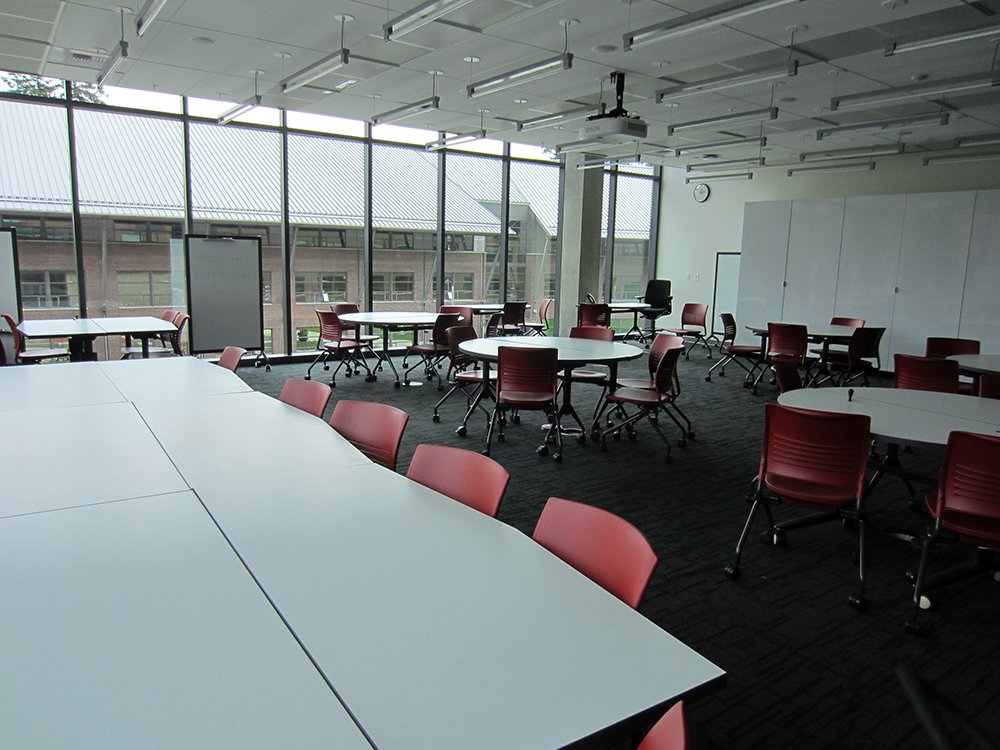 What do staff, faculty, and students think about the new addition? UW Bothell Professor and Chancellor Emeritus Warren Buck described Discovery Hall neatly when he said:

Discovery Hall is fresh in many ways. I am very stoked to see how it works as classes begin. It is so airy and dynamic that it brings the entire campus together in a new way – a place to study, a place to discuss, a place to laugh, a place to reflect. It weaves STEM (science, technology, engineering, and math) with the other schools in juxtaposition.

Others agree. I also spoke with an administrative assistant working in Discovery Hall. She mentioned that “One of the things that I really was excited for in this building, although it sounds silly, is all the light…Discovery Hall really makes use of the surroundings and amplifies the natural light this area has to offer.” She also went on to describe what this new building would mean for campus saying, “Discovery Hall is a strong reflection of UWB and the students that currently study here or want to study here in the future. STEM is all about innovation and growth and I think that these classrooms really cater to that idea and allow students to do so.”

I also spoke with Marvin Eng, a UWB Business student and a government and community relations student assistant. Eng eats his lunch in Discovery Hall every day because he greatly enjoys the space, its quietness, and its modern features. He said he’ll likely come to Discovery Hall to study and work with classmates now that fall quarter has begun.

The environmental impact of the building was kept in mind throughout the construction process. Some of the trees that were removed to create space for the building were reborn into the benches and art pieces surrounding the hall. Discovery Hall is LEED (Leadership in Energy and Environmental Design) certified, meaning the building is designed to maximize energy efficiency and makes the most of renewable, sustainable, resources.

As a current UW Bothell student and previous UW Seattle student, I immediately drew connections between Discovery Hall and the home of the Foster School of Business – Paccar Hall. Exterior to the building, Discovery Hall has large staggered rock “steps” similar to Paccar. Within the building, there were even more resemblances with the showcases, wooden wall panels, sleek, modern, and minimalist design. Even the furniture was similar in style and color. While the Bothell and Seattle campus are quite different in terms of size, study body, and aura, I felt that the similarities in buildings attempt to strengthen the bond between the two locations. 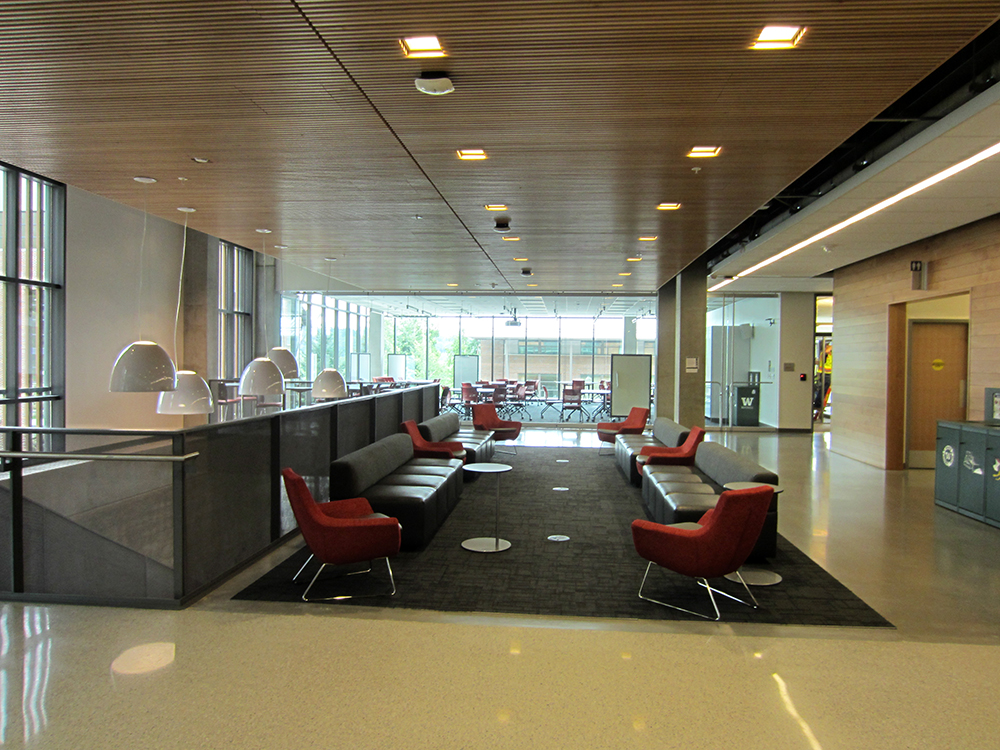 Have you visited Discovery Hall? If so, let us know your reactions below!