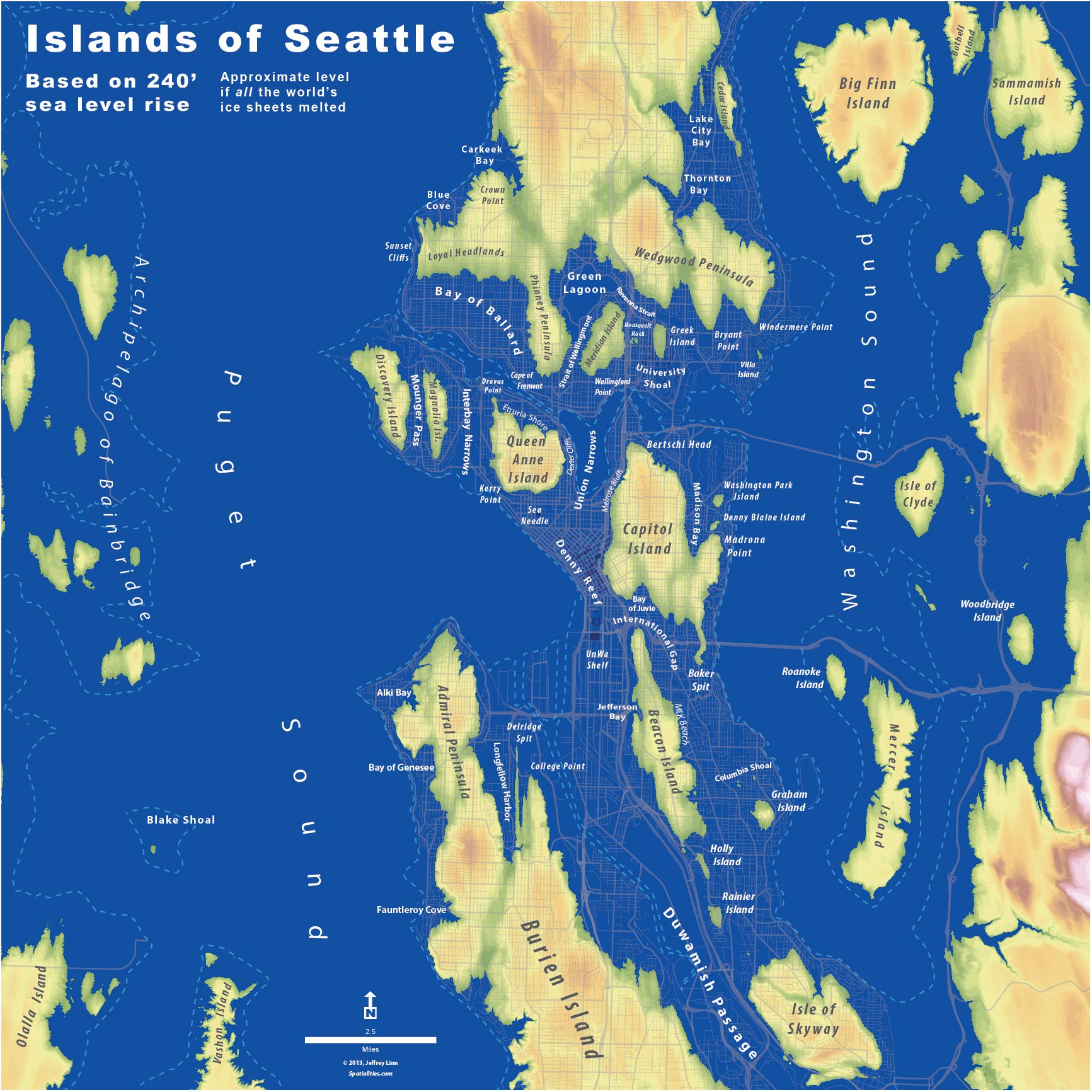 The Whole U aims to celebrate faculty and staff achievement and promote personal interests. With that in mind, we asked Jeffrey Linn to write this guest post about his map of Seattle’s possible future simply because it’s cool and we thought other people might be interested in seeing it. If you’re interested in writing a guest post for The Whole U, please email Margaret at murray4@uw.edu.

If there’s one thing I learned as a Boy Scout, it’s that you should pitch your tent on high ground.

I’ve lived in a few places in Seattle, most of which have been on hills or ridges. One was in a valley, just a few hundred feet from the Lake Washington Ship Canal. In every place, I always had the awareness of whether or not I was on high ground. I always felt comfortable with my site when I lived on a hill, but every once in a while I would have a vague uneasiness about living on lower ground near the Ship Canal. My Boy Scout lesson was learned a bit too well.

With this particular neurosis, it made sense that I’d think about the effects of sea level rise on the city and neighborhoods around me. It was something I wondered about occasionally, looking at topographical maps to see how high, in relation to future shore lines, was my house, my office, my friends’ and relatives’ houses. I’d seen a few maps showing the impact of 10 feet of rise in Seattle—certainly significant, but they didn’t show the full result of hundreds or even thousands of years of ice melt.

I was finally inspired to do this project by the San Francisco blogger Burrito Justice, who posts about, among other things, San Francisco history, geography, and burritos. He created a map of San Francisco as it would be with extreme sea level rise. I shamelessly stole his playful approach to mapping future geography, creating names for the new islands and landforms of Seattle that would result from hundreds of feet of inundation. This map is based on real-world information—I created the Seattle sea levels from publicly-available LiDAR data, rendering the rise of the seas in 10-foot increments for the animation, starting at the current shoreline, and ending with the 240-foot level. The Islands of Seattle poster was rendered at 240 feet of rise, which is roughly what would happen if all the world’s ice sheets melted.

I don’t know how long it would take for this to happen. One estimate says roughly 5,000 years. If this is accurate, then our descendants living with this level of sea rise would look back on our time in the same way that we might look back on the Early Dynastic Period of Egypt. The time of the pharaohs would be closer to us than the time of the Seattle Archipelago. So, although we should all be very concerned about the effects of climate change, including the resulting sea rise, don’t base your next apartment rental decision on this map.

But you should always pitch your tent on high ground. 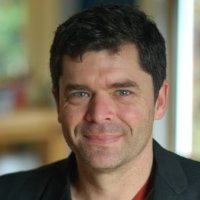 The Islands of Seattle mapping project is in no way associated with Jeffrey’s role as a planner at the University of Washington.

These maps can also be found at http://spatialities.com/islandsofseattle/

Interested in the future of ice? There’s a free lecture series going on now! Learn more on our event calendar or from the UW Alumi Association.

34 Thoughts on “Islands of Seattle”

Glad to see my corner of the Woodland Triangle made it to high ground.

Hate to pick at nits, but I doubt that “our ancestors living with this level of sea rise would look back on our time” in any fashion. 🙂 Our descendants, on the other fin…

Oof, thanks for pointing that out, Ash. It’s been fixed.

Another nit… Descendants is misspelled; a typo I am sure. (So glad my house is on high ground! Too bad it isn’t built to last 5,000 years.) Thanks for a good think this morning.

This one is my fault. This is what I get for trusting Word’s spell check!

This is incredible. Thanks for taking the time to make and share it.

A friend jokingly said, “Sea Needle”.
Can I book a table now?
The space needle is 518 feet, so we’d still be fine.

240 feet of cataclysmic sea level rise and we still have to put up with Mercer Island?

I am so glad you got that. The first few people to see this map were flummoxed by that one.

That is very cool. Can you do one of the whole Sound? I expect that Olympia and Grays Harbor might almost be connected by the sea.

It might take a while for me to get to some other areas around the Sound, but you can DIY in Google Earth… http://www.southernfriedscience.com/?p=15682

Evaporation during the years of melting factored in?

No, it’s not that sophisticated. I took the rough numbers from here– http://pubs.usgs.gov/fs/fs2-00/

How high of a wall would we need to build around the existing coastlines to preserve the current city?

I would like to see how far it goes. Redmond, Snoqualmie Valley, Skagit, Centralia; it would be fun to see where all the water goes. Does the Hood Canal connect over to Bremerton all of a sudden? Fun stuff.

Cool. Skyway will be an island, and after centuries of being “the hood,” will be the high-tone neighborhood.

Glad I leave just across from the Mt. Tabor (extinct) caldera.
In Portlandia. Sadly my Seattle Studio building near the Space Needle isn’t higher up on Queen Anne (Island!).
RIP.
Nice map otherwise. ;-)~

This is so interesting. Thanks for sharing.

I would love to see interdepartmental UW map collaborations! Always fun to learn more about our area.
Total global melt may be an uncertain prediction, but the most likely “disaster” today in America is some sort of flooding, according to insurers.
Also, massive slides can cause sudden localized flooding on the opposite shores… not all waves come from across the sea.

I just want to see the rest of the Sound, particularly the south end of Vashon and Maury! I suspect we are under water, but the map only shows the north tip of Vashon. VERY interesting work! Thanks!

Nice to see the Duwamish waterway will finally have its pollutants washed out.

Finally some quite around here with the train tracks and Interbay Ballfield underwater and their glaring floodlights extinguished as well , they’re almost as bad as the the new LED streetlights . Wouldn’t have to be 240 ft. rise , about 100 ft. would do . Too bad the ice has been getting thicker lately .

Can we get a print version? I’d gladly put this on my wall (great conversation starter for global climate change deniers!)

You can find links to print versions here… http://spatialities.com/islandsofseattle/

Now you’ve got me wondering what my home, Enumclaw, would survive this situation. Same for Whidbey Island, where I hope to retire someday.

Maybe that’s why real estate on a hill always seems more expensive. I thought it was the view.

Boy…the ferry schedule is gonna be a bear!

Looks like it’s time to get flood insurance and a boat.

Very interesting work, Jeff! Hopefully, this course we’re on can be reversed.