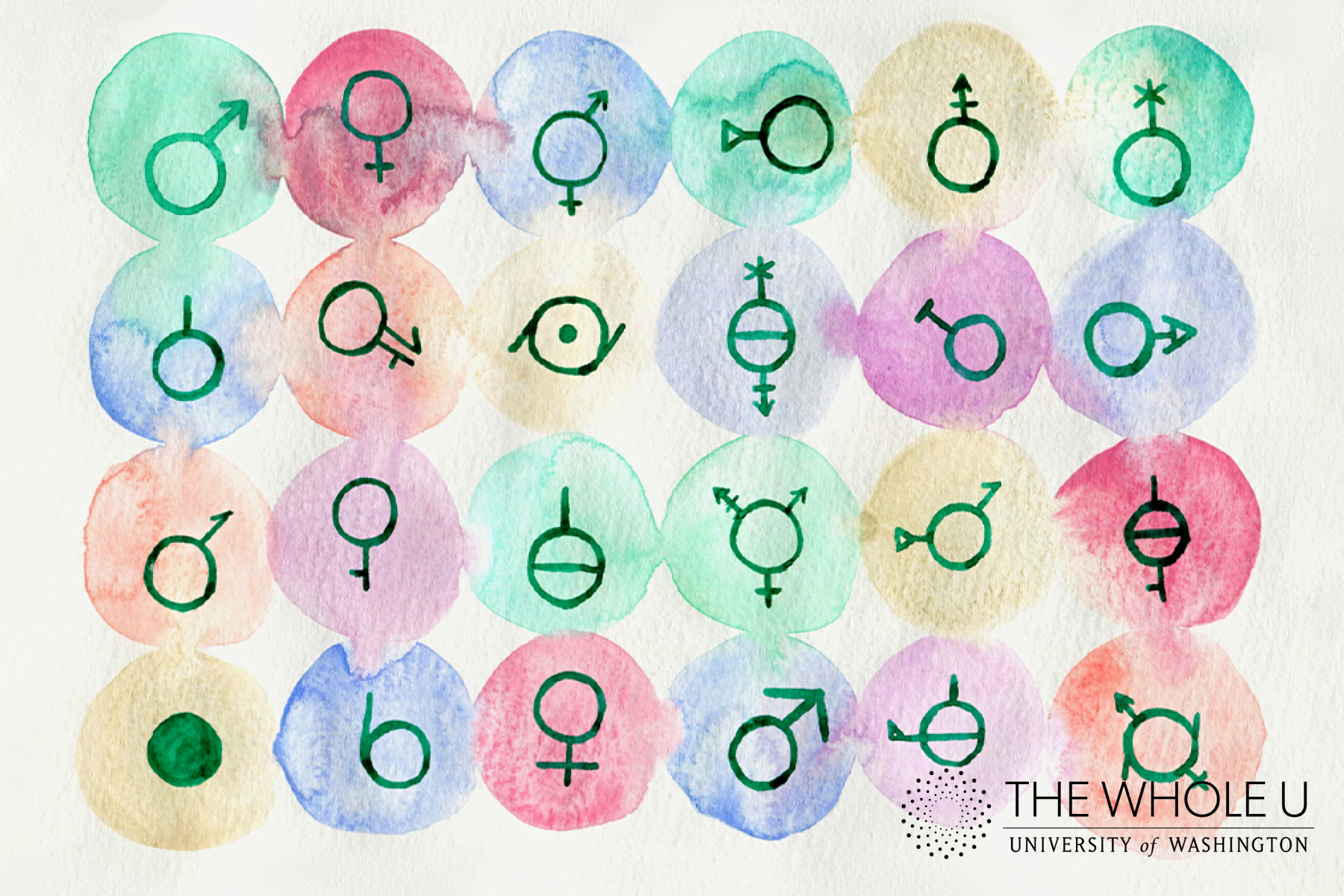 Gender diversity has existed throughout time and across cultures. However, in many western cultures we have been socialized to treat gender as binary, only recognizing men and women.

In this context, understanding what gender-inclusive language is and how to use it can be confusing: it’s not typically something we learn in school, it’s constantly evolving, and people’s preferences for defining their identity can vary widely and change over time.

Nonetheless, to create a more inclusive society, we should aspire toward language use that is respectful of all gender identities and reduce our use of gendered language when it isn’t necessary.

And, like any new habit, particularly one that rejects cisnormativity (the assumption that each person’s gender identity fits the binary and corresponds to the sex they were assigned at birth), incorporating inclusive language takes time and practice.

Language, whether spoken or written, is the primary filter through which most of us perceive and experience the world, and it deeply affects how we relate to and understand one another. The words that we use to describe others are often unintentionally rooted in implicit cultural biases, including biases that privilege the gender binary.

Moreover, according to the LGBTQ+ resource center at the University of Wisconsin, all of the professional associations for psychology and psychiatry in the U.S. acknowledge that inclusive language dramatically reduces experiences of depression, social anxiety, suicidal ideation, and other negative mental health factors among LGBTQ+ youth and adults. 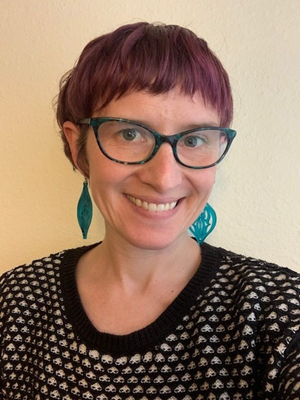 “Being non-binary for me means existing in a world that was not built for me,” said Lauren Lichty (they/them), associate professor in the School of Interdisciplinary Arts & Sciences at UW Bothell and co-chair of the UW Faculty Council on Gender Equity and Justice.

“It means experiencing chronic misgendering, in my professional and personal life,” they continued. “Every time I enter a room, I wonder what experience I’ll have related to my identity and brace myself for misgendering. I hope someday that is no longer true. The energy it takes to decide when to correct people and when to accept misgendering- it’s exhausting and alienating.”

“However, when people get my pronouns right, or when they get it wrong and then quickly correct themselves, it’s like being washed over with warmth. I can breathe easier and feel a shift in my sense of worth and belonging.”

It is easy to inadvertently confuse the terms gender with sex or sexual orientation. Gender is the cultural expression of being masculine, feminine, or any combination or absence of those concepts. Sex is the set of biological markers present at birth, including genitals, reproductive organs and chromosomes. Sexual orientation refers to which genders a person is physically, emotionally or romantically attracted to.

There are several common terms that people often use when discussing gender, as defined by the National Council of Teachers of English:

What’s up with pronouns?

Pronouns, which are words that refer to people by replacing proper nouns like names, are getting a lot of attention these days. Some pronouns are commonly associated with a specific gender category (e.g., he for men and she for women) and some pronouns are not (e.g., they/them/theirs). You might also hear less common gender neutral pronouns such as zie/zim/zir, sie/sie/hir and per/per/pers. 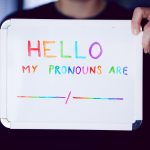 Pronouns specifically refer to the person you are talking about. Each person gets to determine which pronouns are right for them. For some people those may stay the same their entire life. For other people they may change over time, by day, or depending on the setting they are in. Just like you can’t know someone’s name without asking them, you can’t know their pronouns either.

Often, the easiest way to ask for someone’s pronouns is to share your own pronouns first. You can just say “Hi, my name is Nicole, and my pronouns are she/her/hers. What are your name and pronouns?”

In English we have two words to refer to people that are used as both singular and plural: you and they. There was a period in history where people tried to make “they” plural only, but in recent years they has been officially recognized as correct by the Associated Press, principally in the singular. In fact, you probably already use it in everyday speech, as in “I had a 10 a.m. meeting with a client but they had to cancel.”

It’s okay to not know; it’s okay to mess up. What we need is not perfection, but instead a commitment to participate in a culture where we choose humility, care, and compassion, and where we keep trying to do right by each other.
-Lauren Lichty

Pronouns are a part of everyday conversation, and using them correctly is a way to affirm and respect identity in your interactions that has a direct impact on people’s well-being and sense of belonging.

On the other hand, repeatedly using the wrong pronouns to address or refer to someone is known as a microaggression. When someone is addressed or referred to by the wrong pronoun—particularly intentionally—it can make them feel disrespected, invalidated or alienated.

“The ask here isn’t for people to understand every nuance of the trans and non-binary experience,” Lichty said. “If you struggle to relate to why pronouns matter, that’s okay! Consider shifting your perspective. You don’t need to understand my needs in order to treat me with dignity.”

Slipped up on someone’s pronoun? Don’t worry. If it just happened, say something like “Sorry, I meant (insert pronoun)” and leave it at that. And do this even if the person is not present but others are.

In addition to conversation, you also need to pay attention to gendered language in writing, especially in policies and other organizational documents. At UW, the Rules Office began removing gendered language from policy documents on a rolling basis five years ago, and the Faculty Senate is currently reviewing legislation to remove the remaining approximately 80 instances of gender-exclusionary language in the Faculty Code.

Learn more about the rationale and principles for revising policy language.

There are many adjustments you can make to your everyday spoken and written language use that will allow your friends, colleagues and relatives of all gender identities to feel included, welcome and safe. 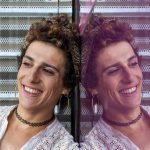 First, avoid making assumptions about gender identity: Most of us have been socialized to attribute gender to people based on how they look, act, or the name they use. Often this happens unconsciously. So our first task is to work on noticing when we are assuming gender. Once we notice, we can gently adjust our thought process by reminding ourselves we can’t know someone’s gender by looking at them.

Practice shifting  your thoughts and speech to use gender neutral language until you know how someone would like to be addressed. And remember, it takes time for these changes to become a habit.

Refrain from defaulting to “-man” in descriptors, using postal worker for postman, sales person for salesman, firefighter for fireman and so on.

To avoid erasing women and nonbinary people from the conversation, try these gender-neutral expressions:

Referring to a group? Use folks, folx, people, everybody, everyone, colleagues, y’all, friends, or attendees instead of ladies and gentlemen or you guys.

Inclusive acronyms for the range of minoritized sexual and gender identities include LGBTQ+ and LGBTQIA+. It’s OK to use either, but in writing, keep usage accurate to the source.

Deadnames—referring to a transgender or non-binary person by a name they used prior to transitioning, such as their birth name, is called deadnaming. If you knew the person by their deadname, it can take some practice to consistently use their new name, but endeavoring to do so acknowledges and affirms their identity.

“Preferred” pronouns: While pronouns aren’t the same thing as someone’s gender identity, the way we talk about pronouns can send messages about the ways we think about gender. The word “preferred” suggests that gender identity is a choice and a preference. It also may suggest that it is okay to use pronouns other than the ones a person shares because it’s “just a preference.” Each person gets to select the pronouns they want used, and we need to use them correctly.

Tranny/trannie/transsexual/shemale are derogatory and have been used as slurs, although some transgender people choose to use them. Only use these terms if you are asked to do so.

Transgendered suggests that being transgender is something that is done to change a person or that a transition is required. Use transgender instead.

Have questions or want a deeper dive? Consider these upcoming opportunities:

What’s the Word: Inclusivity in Language. Offered through UW Professional and Organizational Development (POD), February 23, 9 am – 12 p.m. (fee-based). Inclusive language acknowledges, accepts and celebrates differences; through this intentionality, we can help change our own and others’ attitudes and positively impact our workplace culture for systemically underrepresented groups. Examine how grammatical conventions have evolved over time, learn why avoiding gendered and biased language is important, and practice identifying exclusionary writing and making your own writing more inclusive.

Support efforts to improve gender inclusivity at UW. Share your questions or requests for support anonymously with the Faculty Council on Gender Equity and Justice. The Council will use information provided to advocate for gender inclusion, equity, and justice for transgender, non-binary, and gender expansive people at UW. You can also use this form to express interest in collaborating on this work. Faculty, staff, and students of all gender identities are welcome to contribute.

One Thought on “Communicating respectfully with people of all gender expressions”

This is a great resource! Thank you.