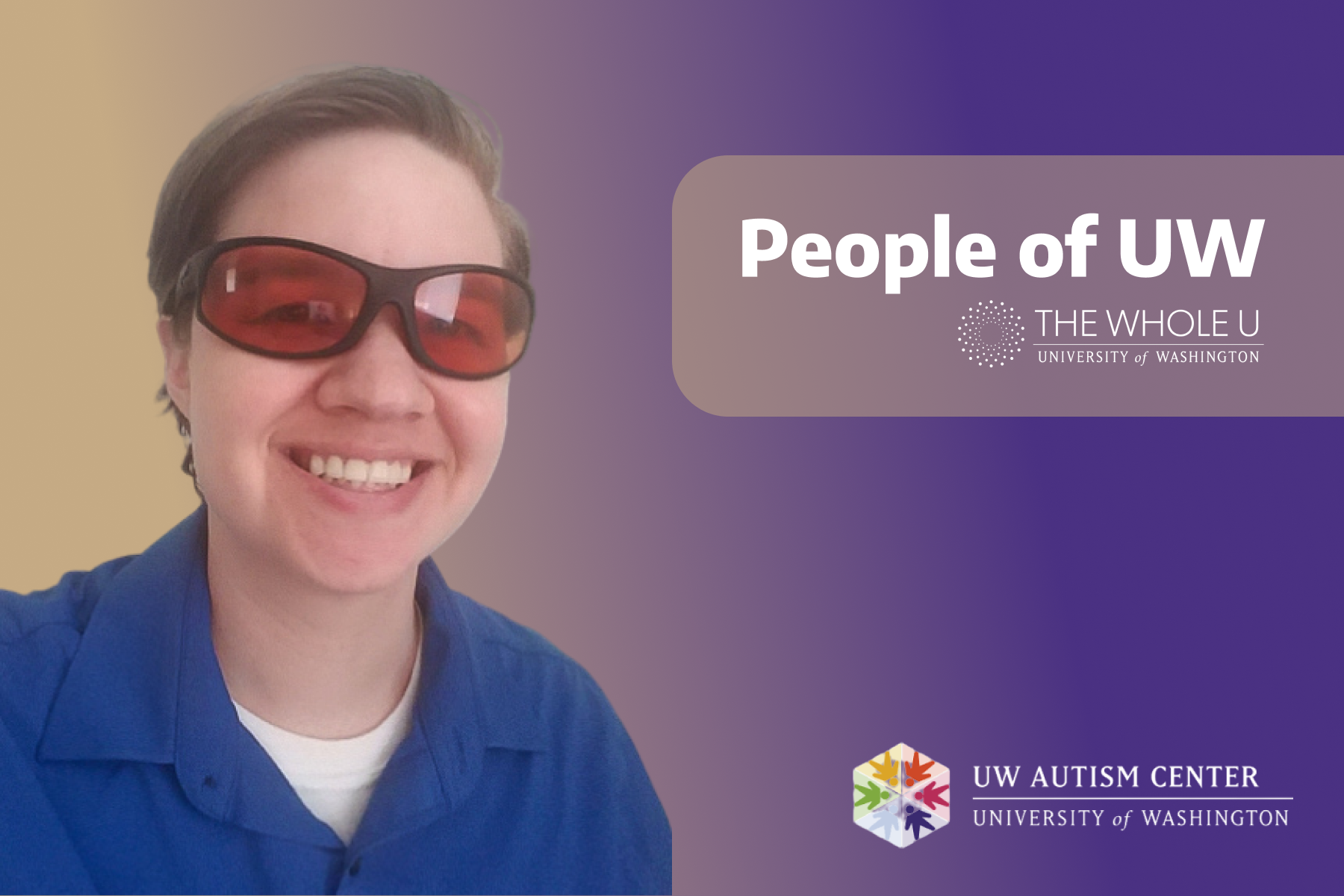 When Lucas Harrington was in college, his life was all about magic: magic after classes, magic every Friday night, and magic on the weekends in giant multiplayer games that carried on late into the night.

Not the magic of card tricks and sleight-of-hand, however – Lucas’ preoccupation was with the wildly popular tabletop and digital collectible card game Magic: The Gathering (developed in the 1990s by Seattle’s own Wizards of the Coast).

The first year of college can be challenging for anyone, and for Lucas – who had already struggled for years with understanding both his gender identity and his neurological complexities – the first year at Pomona College, while academically successful, was particularly socially isolating.

“Playing Magic created a community for me,” he said. “Although I’m not as involved as I used to be, it can still create instant connection anywhere I go.”

Lucas enjoyed the game in both the tabletop and online formats, thriving in the structured world that combines luck and skill to provide what many of its 40 million regular players, Lucas included, consider to be real-world applications: success, resilience, empathy, patience.

A psychologist at the UW Autism Center (UWAC), Lucas provides neurodiversity-oriented meetings and presentations for autistic people, families, UWAC staff, and the community. He received his Psy.D. from the California School of Professional Psychology at Alliant International University and trained as a postdoctoral fellow at UW’s LEND program and the UW Autism Center.

Lucas holds multiple marginalized identities, including genderqueer, disabled and autistic – the latter, a diagnosis he didn’t receive until he was nearly 30.

As a teen, Lucas shared with an uninformed doctor some of the indicators he perceived as autistic – he was picky about food temperatures, had issues with clothing tags, and struggled to deal with change and understand nuance in language, to name a few – only to be belittled.

“The doctor accused me of ‘trying to collect diagnoses’,” he recalled. The result of that experience was that for many years Lucas was uneasy and embarrassed about addressing his concerns with additional doctors.

“In college, I thought of myself as a person with ADHD and some autistic traits, but not ‘real’ autism,” Lucas remembered. He recalls stimming – one of the hallmarks of an autism diagnosis – with the fronds from a palm tree he frequently passed on campus.

He attributes some of his hesitation at seeking a diagnosis to the pressure he felt, and coaching he received both intentionally and unintentionally, to fit in.

Lucas’ proficiency at masking (modifying one’s behavior to conform to conventions of non-autistic social behavior) was in fact so successful that early misdiagnoses – which included social anxiety, depression, bipolar disorder, eating disorders and possible epilepsy – were the result of his stereotypically allistic (i.e., non-autistic) ability to show emotion, laugh, and be circumspect about himself.

In other words, he is ‘high functioning’ – a phrase decried by the autistic community for the way it glosses over their very real struggles.

He considered himself a strong ally to autism acceptance even without a clinical diagnosis, engaging with online autism acceptance groups and volunteering with autistic kids both in the classroom and in the community, where he and some friends hosted game nights at a local board game store.

Despite the challenges his undiagnosed neurological difference posed, Lucas successfully navigated a rigorous graduate program and fellowship training and started a professional career.

He wondered, again, whether his intuition about his autism – despite years of training, by this time, in the field – was simply mistaken.

Then, a friend – a woman – received an autism diagnosis. “I started learning about how very high-achieving people, especially women, can fly under the radar for diagnosis,” he said. Thinking about his friend, “it was all me” Lucas recalled.

It wasn’t until Lucas was a post-doctoral fellow with the UW LEND Clinic – literally conducting the kind of diagnostic evaluations he himself needed – before he found a fantastic neuropsychologist who confirmed what Lucas already, always knew: autism.

Centering optimism in the neurodiversity movement

Neurodiversity is a term we hear a lot these days – and that’s a good thing: it denotes understanding, accepting and accommodating the fact of brain-based difference, or neurodivergence.

Central to the idea of neurodiversity is that there is no right or wrong way to experience the world – how we think, learn and behave – just different ways. Neurological diversity, Lucas says, “is as natural and valuable as racial and cultural diversity.”

Lucas, for example, struggles with tasks that require a combination of motor skills and planning. Cutting out paper shapes for a craft project? Highly challenging. Typing more than 100 words a minute or online gaming? He’s a wizard.

The prevalence of meal-kit delivery options has been a game-changer, too, for Lucas and for many neurodivergent people. The combination of clear, step-by-step instructions with pre-proportioned ingredients has made cooking – often a nightmare of those who struggle with executive functioning – an enjoyable and rewarding experience. (Lucas loves The Acme Box from Bellingham-based Acme Farms & Kitchen).

Many in the neurodiverse community are, for a variety of reasons, self-diagnosed: fear of stigma, fear of the diagnosis being used against them (such as in custody or divorce proceedings), concern over the ability to adopt a child or be a foster parent, and the cost of pursuing formal diagnosis – which can be financially devastating for those without insurance.

Naturally, Lucas is a strong advocate of the value of self-diagnosis and self-advocacy – as is the UW Autism Center and the majority of the autistic community – noting the many barriers to diagnosis that people can face, particularly people of color and those who possess other marginalized identities.

Thoughtful accounting for factors such as systemic oppression, structural violence and the literal and figurative rigidity of the built world toward the disability community inspired the social model of disability in the 1970s and 80s. The model places the burden of responsibility for accommodating disabled people on society, rather than on the disabled individual.

Similarly, the neurodiversity movement centers neurodivergent people’s rights and value as human beings. Proponents of the movement assert that all people – neurodiverse or neurotypical, autistic or allistic – can have happy and meaningful lives, regardless of whether they meet conventional expectations of success or not.

Like virtually all proponents of the neurodiversity movement, Lucas does not believe in trying to cure or get rid of neurological differences like autism. Rather, he and his colleagues advocate for support and therapies that take an expansive view of what a successful life looks like.

“All kinds of brains should be accommodated for their unique needs and have opportunities to contribute through their unique strengths,” Lucas explained.

Lucas is optimistic about the impact the neurodiversity movement is having, and its implications for reflecting the true diversity and heterogeneity of autistic people. “Autism acceptance does not mean liking everything about how autism affects us,” he wrote. “It doesn’t mean giving up on learning new skills or otherwise improving our lives.”

Indeed, he continued, autism acceptance “means looking at us as whole people, autism and all, and choosing to focus on the possibilities that are present right now.”

There are many researchers and organizations to whom Lucas credits his philosophical approach to life. Social work researcher Dr. Brene Brown’s book The Gifts of Imperfection, he said, “was a real-life changer for me.”

“I loved learning about the idea of whole-heartedness,” in graduate school, he continued. Like many neurodivergent people, as a child and young adult Lucas had internalized received values about the importance of fitting in.

“A lot of my identity as a young adult didn’t really make sense to me,” before he discovered Brown’s work, he said, both in terms of his identity and neurodivergence.

Assigned female at birth, Lucas long felt he had a “masculine energy” but had difficulty knowing to what aspect of his identity he should assign that nagging feeling. Brown’s research presented concepts in way that made sense to Lucas, and named emotions and occurrences he had experienced, but didn’t have the words to explain.

Having grown up in California, Lucas is very happy living in Seattle and working at UW. He definitely sees himself staying in the Northwest, where there are robust resources for both the neurodiverse movement and the transgender and genderqueer communities.

It doesn’t hurt that we have an enormous and enthusiastic Magic community around here, too.

The UW Autism Center, Lucas says, is a wonderful place to work: a whole person environment that respects the work/life balance. He and his colleagues are given space to explore their interests and autonomy in their professional decisions. Significantly, his colleagues and supervisors “are receptive to and proactive about the neurodiversity movement.”

Lucas is on the path now, he believes, to achieving true belonging in the world: embracing his queer identity and claiming his disability as a source of pride, creativity, engagement and, most importantly, empowerment.

“Being disabled doesn’t mean you can’t accomplish things,” he said.

Lucas suggests the following resources for people and families looking for a deeper understanding of and support for neurodiversity:

The UW Autism Center is a clinic-based, short-term, comprehensive and intensive early intervention program to improve diagnosis and treatment in autism spectrum disorder.

The Autistic Self-Advocacy Network seeks to advance the principles of the disability rights movement about autism. ASAN believes that the goal of autism advocacy should be a world in which autistic people enjoy equal access, rights, and opportunities.

The Autistic Women and Nonbinary Network’s mission is to provide community, support and resources for Autistic women, girls, transfeminine and transmasculine nonbinary and genderqueer people, trans people of all genders, Two Spirit people, and all others of marginalized genders.

Thriving on Two Spectrums is a local, monthly support group for parents of autistic and transgender/nonbinary youth, providing information, support and friendship.

Supporting neurodiverse colleagues in the workplace (YouTube) is the recording of a panel discussion hosted by UW WorkLife on June 1, featuring Lucas in conversation with four other panelists on the topic of neurodiversity in the workplace.

One Thought on “Meet Lucas Harrington of the UW Autism Center”

I loved reading this and can relate to Lucas’s story in so many ways. I spent half of life playing advanced dungeons and dragons myself and actually took the name of my Drow elf as my real name for quite a long time. I too am self-diagnosed and while autism can complicate things, there is this other aspect of it that I find fascinating. That’s the resilience aspect of it. My ability to be find light, leverage my goofiness in ways that keep me from slipping into the dark, to instead find myself mostly at peace, joking and yakking away to my dogs on a daily basis (and I mean serious conversations here, they are quite astute little guys), even amidst chaos sometime takes me aback. Can you relate to this at all, Lucas? In any event, this article made me smile and I hope to get to meet you one day. You will have to show me how to play Magic 😉