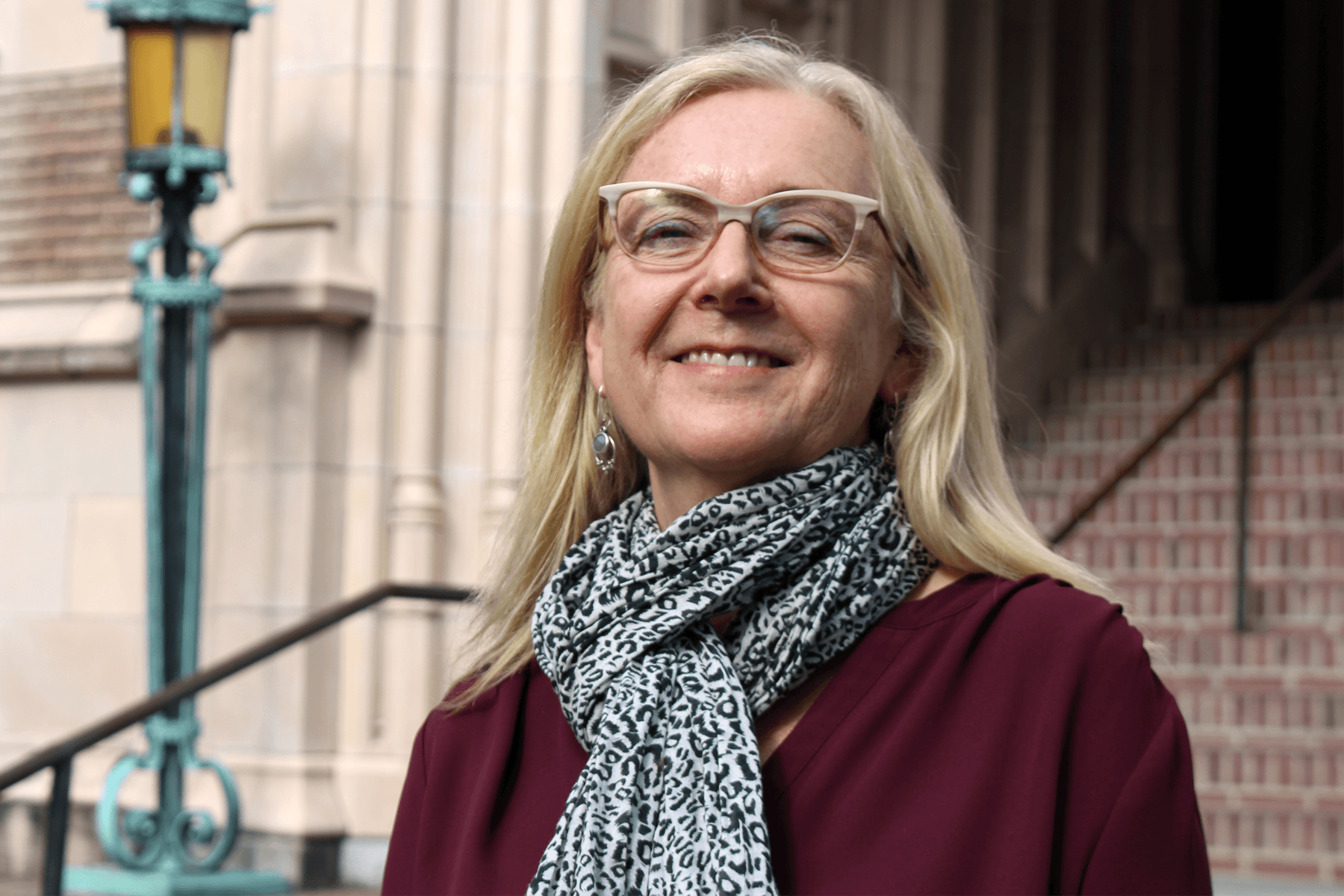 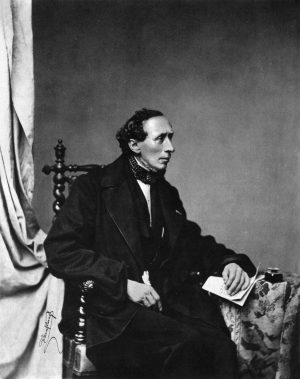 “The Ugly Duckling.” “The Little Mermaid.” “The Emperor’s New Clothes.” If you haven’t read one of Hans Christian Andersen’s stories, you likely have seen one adapted on film or heard one of the titles invoked in everyday conversation. Since they began appearing in the 1830s, Andersen’s tales quickly became known the world over–translated from their original Danish into more than 150 languages.

So just what makes these 19th-century fairy tales so remarkably enduring? Marianne Stecher, a professor of Danish and Scandinavian Studies at the University of Washington who has taught a class on Andersen and the fairy tale since 1992, has a good idea why.

“What’s interesting about Andersen and the reason I think he’s so popular around the globe is that he often writes about the experience of otherness, or alterity” she explains. “And that’s what those stories—”The Little Match Girl,” “The Ugly Duckling,” “The Little Mermaid”—are about: this painful experience of being ‘the other’ or being marginalized.”

For example: contrary to the formulaic happy ending of Disney’s adaptation, Anderson’s original tale depicts the Little Mermaid leap into the sea–legs and all–after being spurned by the prince.

“The Little Mermaid wants to rise to the world of humans and is willing to undergo physical suffering, and mutilation—she has her tongue cut out to give to the sea witch–so she can grow human legs,” Stecher says. “It’s really a deep tragedy: she’s willing to go through all this for the chance to maybe belong in another or ‘higher’ world.”

The story can be interpreted into a range of contexts, but becomes most interesting, Stecher says, when contextualized within Andersen’s own life story—one that in many ways mirrored the rags to riches fairy tales that made him so famous. 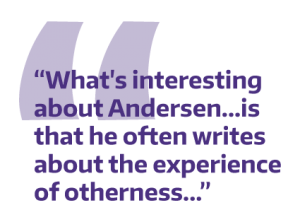 “The story gets more and more interesting when Andersen’s biographers began delving into the question of who was the object of desire that Andersen the poet so wanted—what is the painful story for him?” Stecher asks.

It was likely a combination of the fact that Andersen, in spite of his success, never felt fully accepted into the world his success at writing opened to him. Much of the research into his life, Stecher says, also points to Edvard Collin, a male member of the family that patronized and “adopted” Andersen into bourgeois Danish society.

“His deep attachment to Edvard continues to be explored by scholars in the context of this story of unattainable love,” Stecher posits, adding that Andersen never married or had children, but maintained close and emotionally intimate relationships with both men and women throughout his life. “His gender identity seems very fluid. You see that in his stories and I think that is one of the reasons his stories speak to so many people and are so readable still today. He’s not your average ‘old white male writer.’”

Andersen’s self-perceived shortcomings as he rose in society as the son of an itinerant shoemaker and a washerwoman are just one aspect of the writer’s personality that make him such a fascinating figure to this day. Stecher will explore the lesser known sides of Andersen’s work in an upcoming public lecture at the National Nordic Museum on October 10, titled “Hans Christian Andersen: Fairy Tales and Science Fiction.”

“What many might not know is that Andersen was deeply interested in science and technology, beginning in the 1850s, and he incorporated some of this new and, at the time, cutting edge technology that was emerging into a few of his fairy tales,” Stecher says. “Those are the fairy tales I call ‘science fiction’ —stories in which Andersen is trying to envision the future.”

In 1851, for example, he wrote a story called “In a Thousand Years’ Time” about American tourists flying in an air machine from the North American continent to Europe and touring Europe primarily from an aerial view in seven days. 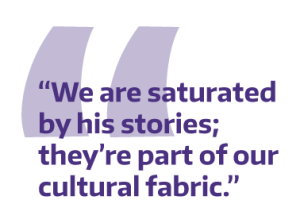 “It’s very satirical; in a way, it’s sad too, because the tourists see very little of Europe actually because they’re in such a rush,” Stecher says. “In the end, Andersen writes: ‘And we’ve seen it in eight days. And it can be done!’”

Andersen also wrote a story about the trans-Atlantic cable laid across the north Atlantic in the 1860s from the perspective of the deep-sea fish who encountered the cable on the ocean floor and take it for great sea serpent.

“The fairy tale is told as a dialogue between fish,” Stecher says. “An example of Andersen being very fanciful with his perspective, but also of his genuine interest in these new developments and his effort to try to understand and see where human society is headed.”

His interest in science was fueled by his friendship with Hans Christian Ørsted, a fellow Dane, physicist, and natural scientist credited with the discovery of electromagnetism in the 1820s.

“In addition to being a scientist, Ørsted also wrote essays on cultural topics and advocated that writers and poets should be up to date with current technology and scientific development because then they could speak to modern audiences more convincingly,” Stecher says. “So when Andersen writes science fiction—fanciful fairy tales with some elements of new technology in them—he’s trying to rise to the call of Ørsted to step out of outmoded romantic modes of thinking and develop a new discourse.”

Stecher says she views the story “‘In a Thousand Year’s Time’ as a “kind of tribute to Ørsted” soon after his death in 1851 and further evidence that Andersen deserves to be remembered not only for the 30 or 40 best-known fairy tales among hundreds, but also for a multifaceted literary career as a novelist, poet, playwright, travel writer and artist who dabbled in elaborate paper cut outs. Andersen’s understanding of human nature is, Stecher contends, one of the reasons why his stories still resonate with so many worldwide.

“He was a man of his times—a European writer who was up to date with what was going on in literature and culture and the sciences in the second half of the 19th century,” she says, adding that in his lifetime (1805-1875), Andersen witnessed Denmark’s transition from a society ruled by an absolutist monarchy to one that was far more democratic.

“He lived in this age of tremendous social and political transformation—that’s true of Denmark as well as the whole world—and those changes are mirrored in Andersen’s tales in universal ways that everyone can appreciate.”

Stecher says she hopes her talk at the National Nordic Museum will illuminate the lesser known elements of Andersen’s oeuvre of work–which includes six novels, five travel books, numerous plays, poetry, and prolific letters and diaries–”bringing him into a light as a European writer, intellectual and cultural witness of the mid 19th century who was very much aware of new developments.”

While Andersen was well received by nobility across Europe (he eventually received a royal stipend from the King of Denmark), the class sympathies advanced by his fairy tales helped him find far-flung popularity.

“He’s very much canon in China, where he is read as a Marxist writer because of his class sympathies,” Stecher says. “During Mao’s regime, Andersen’s fairy tales were sanctioned as appropriate reading.”

“We are saturated by his stories; they’re part of our cultural fabric.”

A Sense of Cultural Stewardship

Stecher’s own story is also one of Denmark’s global reach. The daughter of Danish immigrants to Canada, Stecher describes herself as a “Danish North American.”

Both her parents grew up in Denmark, where they lived through the Depression and the German Occupation during World War II —her father in Odense, the city of Hans Christian Andersen’s birth—before marrying and then sailing to the United States in 1953, the last year immigrants were received through Ellis Island. They headed north by train and, after a stint in Montreal—”realizing their high school French wasn’t as good as they thought”—they moved on to Toronto for five years and later to the San Francisco Bay Area.

“I’ve had a foot in both worlds my entire life, which is a privilege to be able to grow up that way in two cultures,” Stecher says.

While majoring in history as an undergraduate at UC Berkeley, Stecher gravitated to Scandinavian literature and languages, having grown up in a Danish speaking home. “My interest in Danish literature, language, and culture was fed my whole life and at some point in my undergraduate years it became a passion,” she says.

After graduating, she obtained her Master’s degree in Scandinavian Studies at the UW, falling in love with Seattle before returning to Berkeley for the PhD degree. In what she calls a moment of “serendipity,” the very month she filed her dissertation, a tenure-track professor position in Danish was announced at the UW. She recalls encouragement to apply from her PhD advisor at UC Berkeley, the late Eric O. Johannesson.

“He said, ‘Marianne, this must be for you. I am writing you a letter of recommendation!'”

In the ensuing 28 years as a professor at the UW, Stecher has published books on Danish writers, including a recent work on the essays of Isak Dinesen (the pen name of Danish writer Karen Blixen who wrote Out of Africa) and recently finished a book-length manuscript with 17 collaborators on Nordic war stories and cultural memory—an analysis of how the Second World War is represented and collectively remembered in the five Nordic nations through fiction, film, and historiography.

“The generation of people who were old enough to have experienced the war as teenagers or adults – such as my parents – has now mostly passed away,” Stecher says. “It’s important to investigate how societies and cultures shape cultural memory of pivotal historical moments.”

This quarter, she is teaching a 400-level course cross-listed with the Jackson School on World War II and the occupation in the Nordic region, as well as a course in advanced Danish language with a special focus on how marginalized elements of society are represented in fairy tales and literary texts.

“As a Canadian-born, Danish American who teaches in North America and mediates literature for new publics—undergraduates as well as graduate students —it’s very important for me to try to contextualize and appreciate canonical writers such as H.C. Andersen and Karen Blixen,” says Stecher who also serves as Graduate Program Coordinator. “I am an ambassador for Denmark and for Danish culture, language, literature. I am deeply dedicated to the Danish program and Scandinavian Studies here at the University of Washington.”

Marianne Stecher holds a PhD from the University of California-Berkeley. Catch her public lecture, Hans Christian Andersen—Fairy Tales and Science Fiction, on October 10 at the National Nordic Museum in Ballard at 6:30 p.m.

Stecher will also co-present a lecture on the realist/symbolist painter L. A. Ring, his art, life and place in Danish culture on September 29 at the National Nordic Museum in collaboration with the exhibition On the Edge of the World: Masterworks by Laurits Andersen Ring from SMK–The National Gallery of Denmark.

Marianne dear,
So proud of you are we all! You have achieved so much and will continue the rest of your career. A great mother and a great mother-in-law!
Much love, Lynn