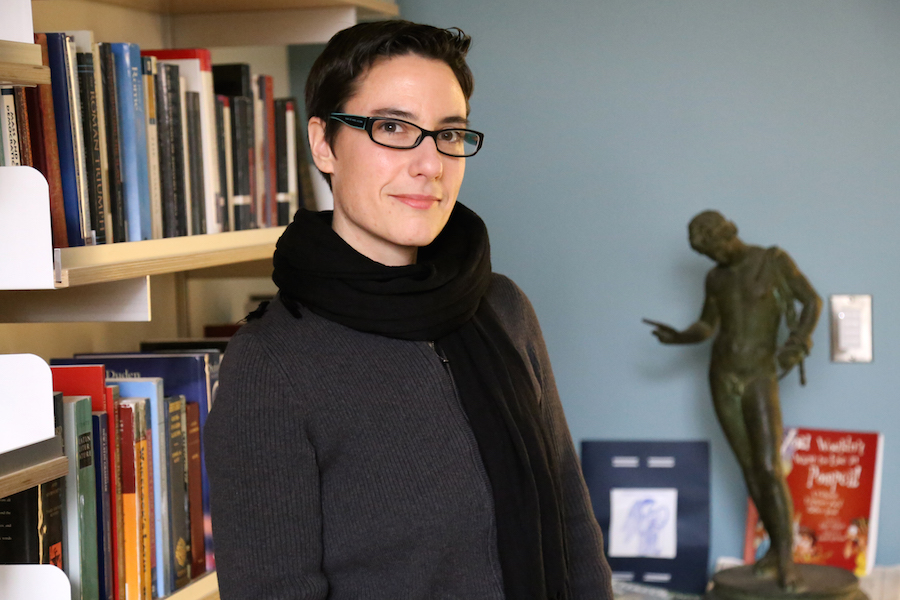 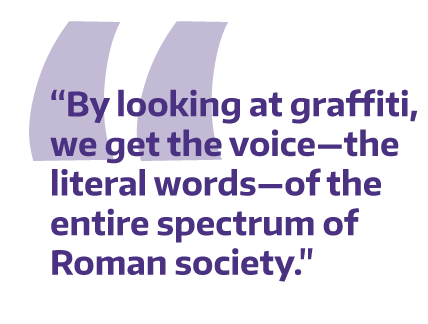 When ancient walls talk, Sarah Levin-Richardson listens. What she hears are the unheard voices of a distant past—those of slaves and prostitutes, men and women who, in the classical literary tradition, are otherwise left on the outside looking in.

An assistant professor in the Department of Classics at the University of Washington, Levin-Richardson specializes in Roman art and archaeology, gender and sexuality, and Latin graffiti and epigraphy—the study and interpretation of ancient inscriptions. Ground-zero for her research is a building unique to time and place: a “purpose-built” brothel in ancient Pompeii—the only known structure of its kind in the ancient Roman world.

“By looking at graffiti written by everyday folks—including prostitutes—we can hear other viewpoints,” Levin-Richardson says of the phrases inscribed on the building’s interior walls.

“Sometimes, what we’re learning from graffiti and archaeology gives us a radically different view than what the male elite sources tell us. We get the voice—the literal words—of women, of slaves, of prostitutes, of construction workers—literally the entire spectrum of Roman society.” 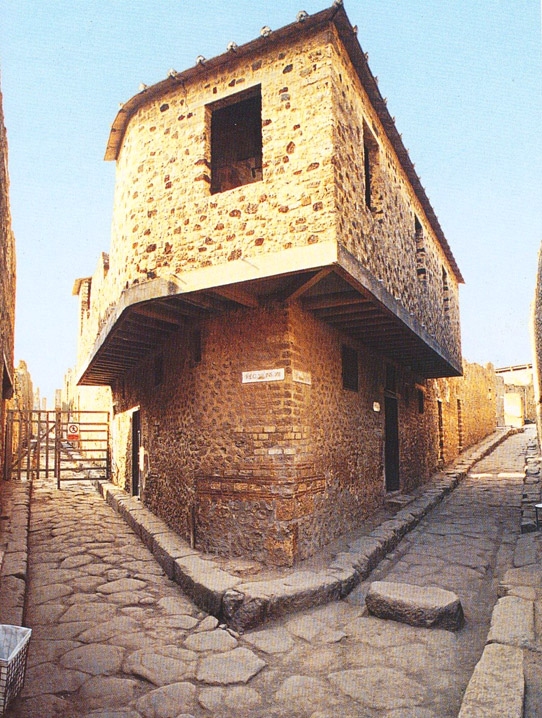 The brothel featured five small rooms, each with its own stone platform. Almost 150 graffiti were written on the walls in antiquity. An upper floor, of indeterminate use, was reached by an independent entrance and wooden staircase. The purpose-built structure is the only known one of its kind in the Roman world.

Graffiti within the purpose-built brothel was left by clientele and sex workers alike—most typically messages of self-praise or in praise of others. For an ancient Roman world still largely defined by elite male writers, the inscriptions offer a radical alternative to the received literary wisdom of scholars down through the ages.

On the brothel walls, prostitutes vent their hopes, dreams, and frustrations, while simultaneously enduring—and in some cases encouraging—the scrivenings of their own clientele.

“It gives us a sense of what groups who don’t have power are like as people,” Levin-Richardson says of those making the wall markings. “On the literary side, these people are often portrayed as caricatures, but in the graffiti, we can start getting a sense of what their lives were like—as well as their hopes and dreams.”

In 2017, Levin-Richardson and UW Classics Department colleague Deb Kamen won the Barbara McManus Award for Best Article for “Lusty Ladies in the Roman Imaginary,” which explored the concept of female sexual agency in ancient Rome.

They concluded that, “regardless of the ways in which the activity of lusty ladies could be vilified, fetishized, or used to justify sexual violence, there remains a clear conceptualization of some women as active in sexual encounters.”

Together, Levin-Richardson and Kamen proposed revising the conceptual map of Roman sexuality—until recently largely delineated on male-dominant lines—to reflect female sexual agency in the ancient world. In their estimation, women were as great a part of Roman societal consciousness as anyone else.

“In what I work on, we can see women’s sexual agency and pride in the work they do,” Levin-Richardson says. “It can be hopeful on the one side, but also really grim on the other side. It’s really important to have both those viewpoints of antiquity because I think we tend to overemphasize all the good things about antiquity and not think about the bad side.”

Levin-Richardson describes her own path to classics as “circuitous.” She fell in love with ancient art and architecture unexpectedly while participating in a study abroad semester in Greece. At the time, she was majoring in political science and minoring in women’s studies as an undergraduate at UNC: “I think that my interest in women and marginalized groups got started there. My intention was to go into law and human rights.” 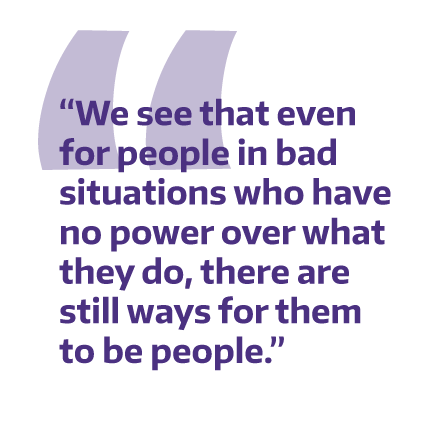 Levin-Richardson says she sees ancient graffiti as the perfect vehicle for introducing students to the classical world—bringing them face-to-face with a world at once foreign and familiar.

“When I bring up graffiti in my classes, students go crazy for it, because it feels like something you could see today,” she says. “For all of us, it makes you feel a connection to real people from the past. It’s important to have a view onto the harshness and the grittiness and the power dynamics of that era.”

She’s currently working on a monograph exploring the physical, social, and emotional environment within Pompeii’s “purpose-built” brothel—a body of research influenced by and contributing to feminist and queer theory that aims “to recover the contours of agency for marginalized groups”—male and female alike.

When finished, Levin-Richardson says she hopes it will stand alongside her colleague Sandra Joshel‘s The Material Life of Roman Slaves in illuminating the lives of a marginalized population in Italy which, by the 1st century BCE, was populated by almost a third slaves.

“One of the things I like about working on the brothel is we get to understand both the kind of grim, harsh, disturbing realities of what ancient prostitution involved, but we also arguably get to see that, even for people in bad situations who have no power over what they do, there are still ways for them to be people. There’s something about the human spirit that refuses to be extinguished and that is really powerful.”

The good, the bad, and the human

For Levin-Richardson, it’s not enough to examine ancient culture for its positive and negative elements alone.

“If we stop at the good stuff—the arches and emperors—we’re completely misunderstanding antiquity,” she says. “But if we stop with the grim stuff, it’s pretty depressing.” 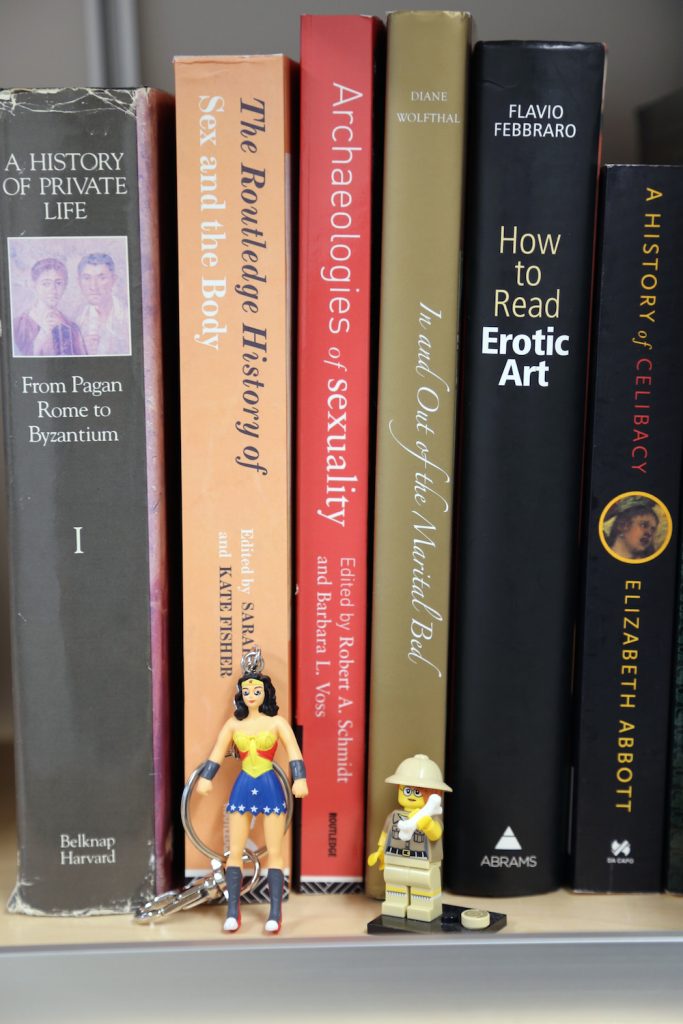 So Levin-Richardson encourages students to delve one level deeper: probe past the initial dichotomy of positive-and-negative, good-and-bad, and the classical world is revealed in a rich patchwork of complexities that readily map to the modern world.

“I think [classics] can challenge some of our ideas and actually work to break down barriers we have set up between the Western tradition and other traditions,” Levin-Richardson says.

“When people think of Western civilization, people think of Greece and Rome, but when you look at Greece and Rome, you realize that they are having interactions with so many cultures around them—in trade, in exchange of ideas, in thinking about what it means to be a Roman in a culture that spanned three continents. In general, you find there are more similarities between people than differences.”

It’s humanity that runs as the common thread.

“I think it’s important and powerful to realize that we are still human beings; we can still have humanity,” she says. “You look at an example from antiquity such as prostitution—this is one of the worst situations you can possibly imagine—yet these are people who are able to fight back and return to being human beings when no one is there and to have some hope for a better life.”

What would she say if she could directly address these voices from the past?

“For a very long time, classicists didn’t want to listen to these voices of these marginalized groups—nor were they listened to or respected very much in antiquity,” she says. “So I’d want to say, ‘I hear you and I respect you.’”